The traditional knife you feel was your best deal...

Okay, so, we all have received knives as gifts and such. Maybe some of you have even found some knives. Those, of course, would have cost you zero dollars.
Well, my question is a little bit different here... What would be the traditional knife, (fixed blade or folder), that you came across being offered for sale somewhere, and that wound up being what you consider to be the best deal you ever got on a knife purchase?

I will start with this fixed blade knife, one that I have shared here before on other posts. It's an antique Joseph Rodgers & Sons Stag handled hunting Bowie knife with a 6" blade. I paid $50 total for it some short time ago, (maybe a year or less ago).

I've paid as little as just a few dollars for some knives that have wound up being great bargains. Like the time I paid $4 for this minty Victorinox Swiss Army Knife with Buffalo Horn handle scales. It's likely about 70 to 80 years old, so four bucks was a true steal! 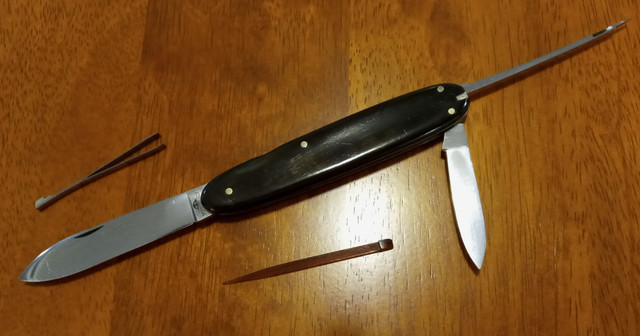 But, the Joseph Rodgers Hunting Bowie is the one that checked all the boxes for me for being my best deal on a knife. It's vintage is likely late 1890's to 1910. The Joseph Rodgers name was obviously a premium brand name in it's heyday, and is still a sought after brand by many collectors. It's absolutely great condition was truly the icing on the cake, with even it's sheath being fully intact and just as nice of shape.
It's been the one knife that I most think to myself, "Darn, I truly scored a great deal on this one!".

So, yes, which knife in your possession is the one you feel checks all your boxes for having been the best deal you've ever gotten on a knife acquisition?
Of course what checks your boxes may differ from mine and others, but that's okay

This #56 weaver jack, sold to me on Bladeforums many moons ago by Jim Fagan...This started my love affair with GEC...

This Camillus pen from the Monroe hdw company is one of my favorites , it's such a wonderful knife and I think I paid about $12 for it NOS on Ebay. 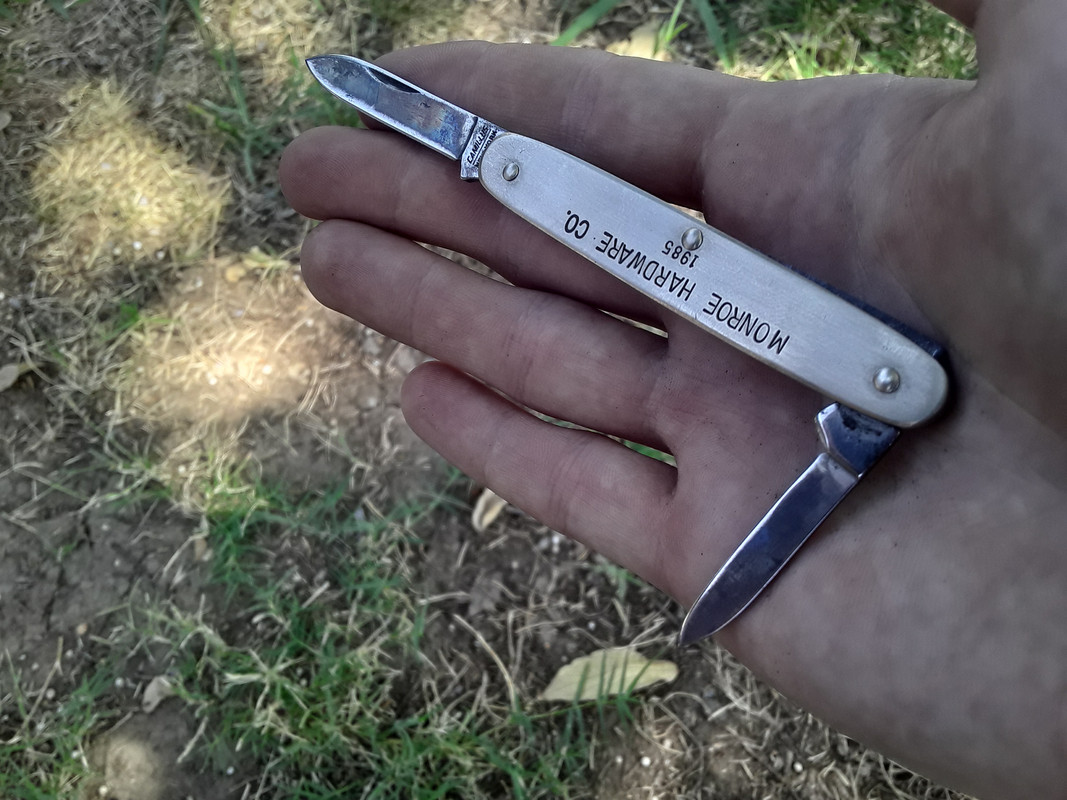 I like the knife so much that I found one of another year NOS on Ebay to give away here on the porch.

Both were very inexpensive for me to purchase.

Fished this Canal Street Pinch out of the bay for $31 shipped. Cosmetically beat up and needed a thorough cleaning. Action is good, Lock up is tight. D2 steel. A favorite pattern of mine

got this beauty for a great deal right here on the forum a year or two ago.

Got a good deal on this half whittler some years ago. 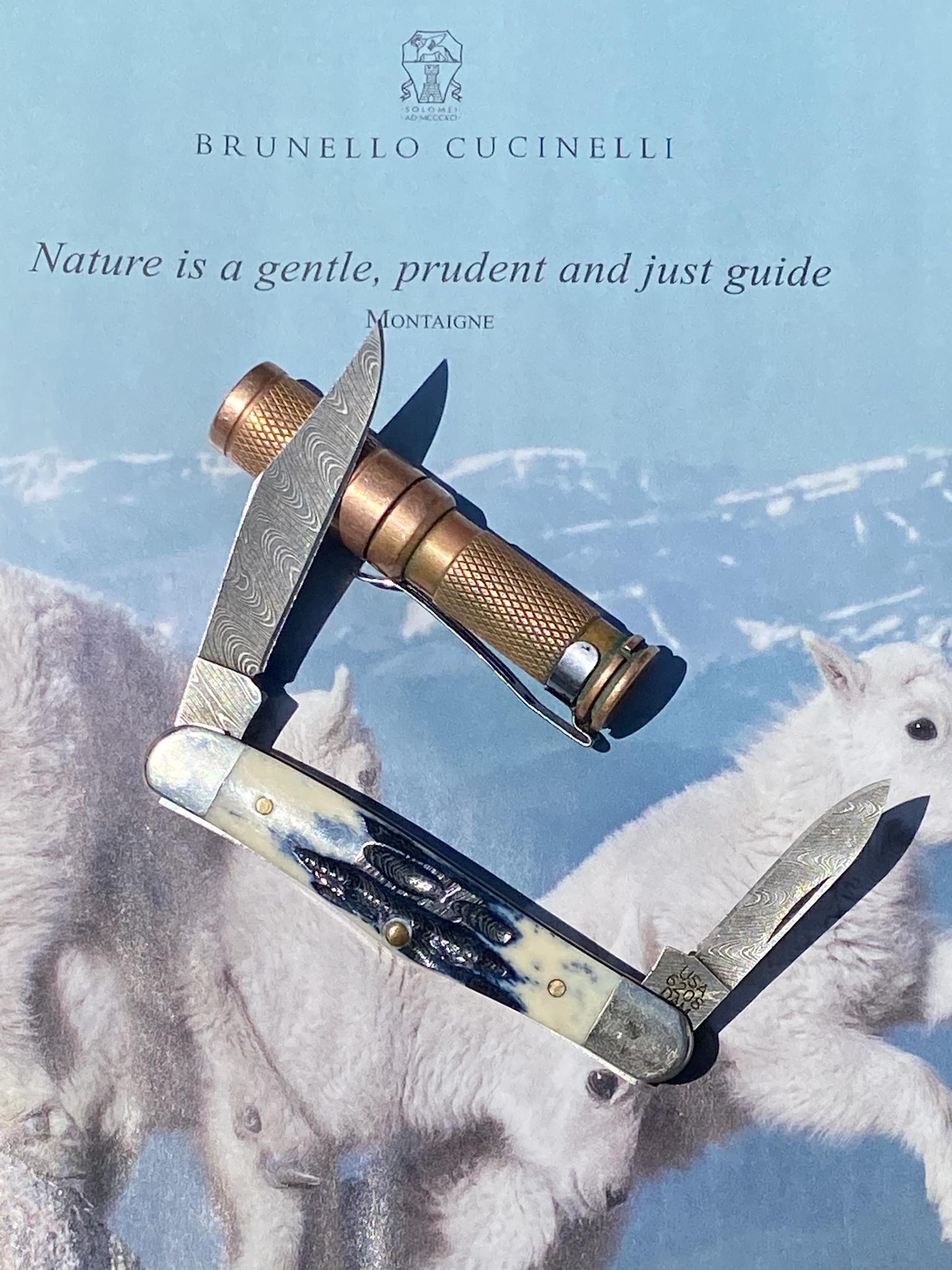 The best deal I can remember is this pre-1986 Buck 701 in near mint condition. About 2 years ago an Ebay seller had a Buy It Now price with a Make Offer option. I offered him $25 fully expecting to either be declined or counteroffered but he accepted my $25 offer. I'm still grateful to this day. 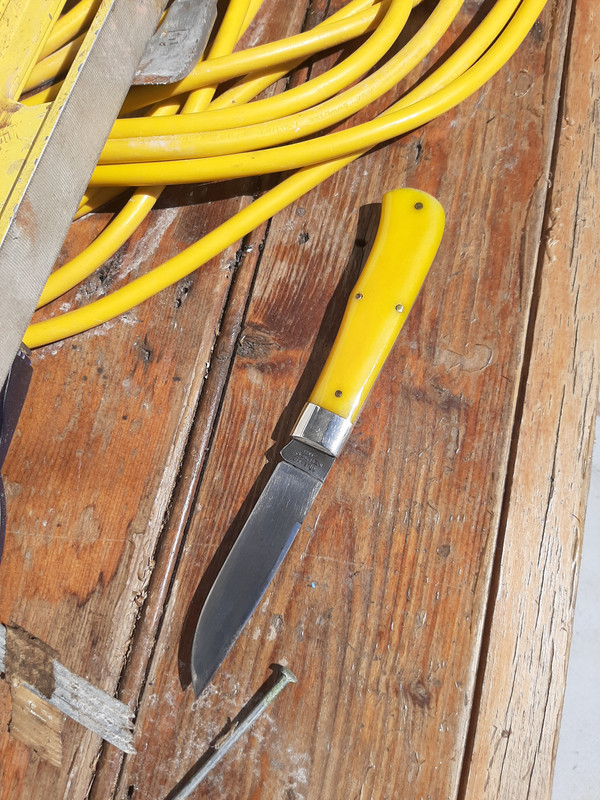 Several years ago out of curiosity I picked up this Rough Rider for about $14 . Not on par with Case but well worth the price. 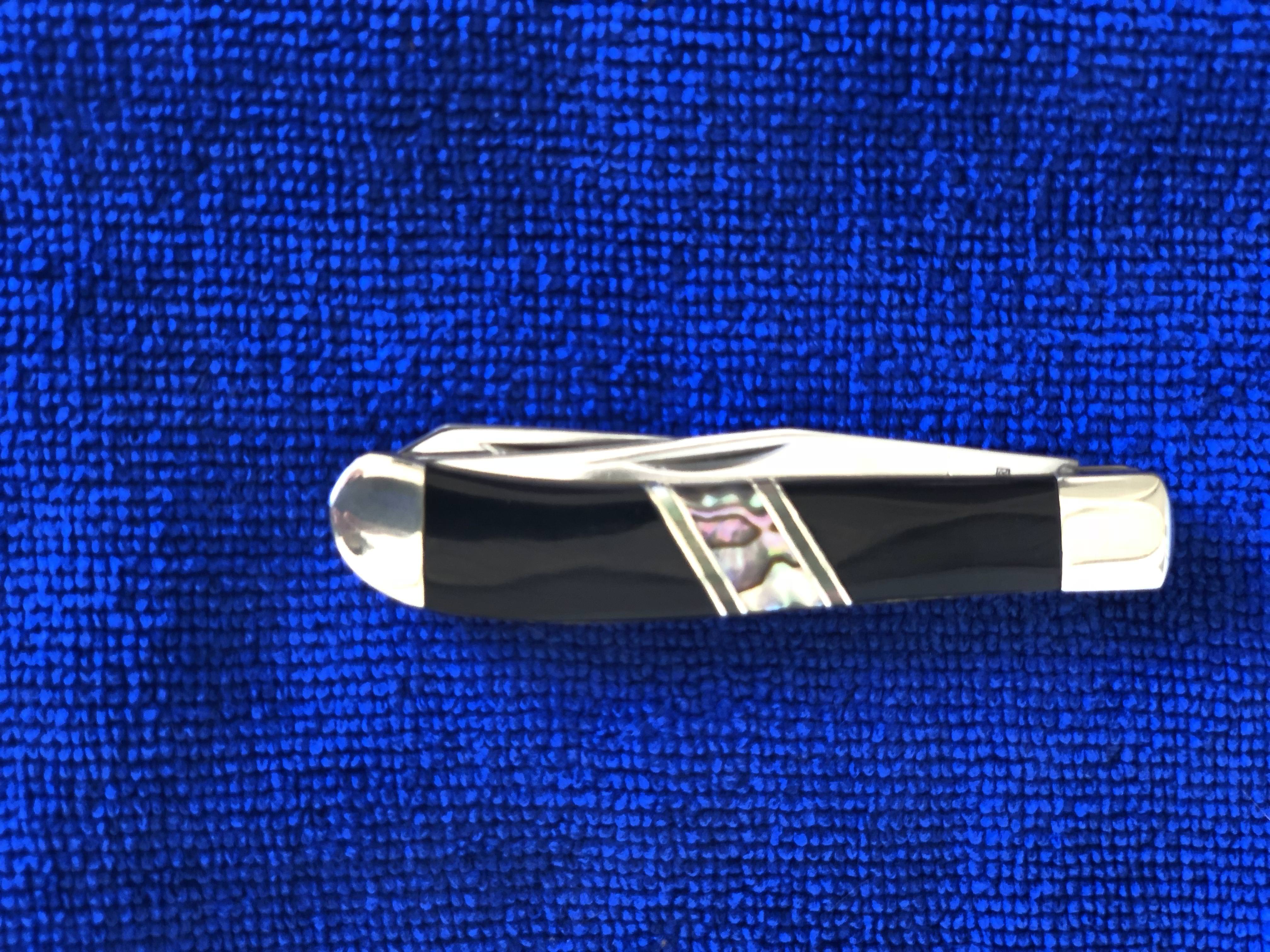 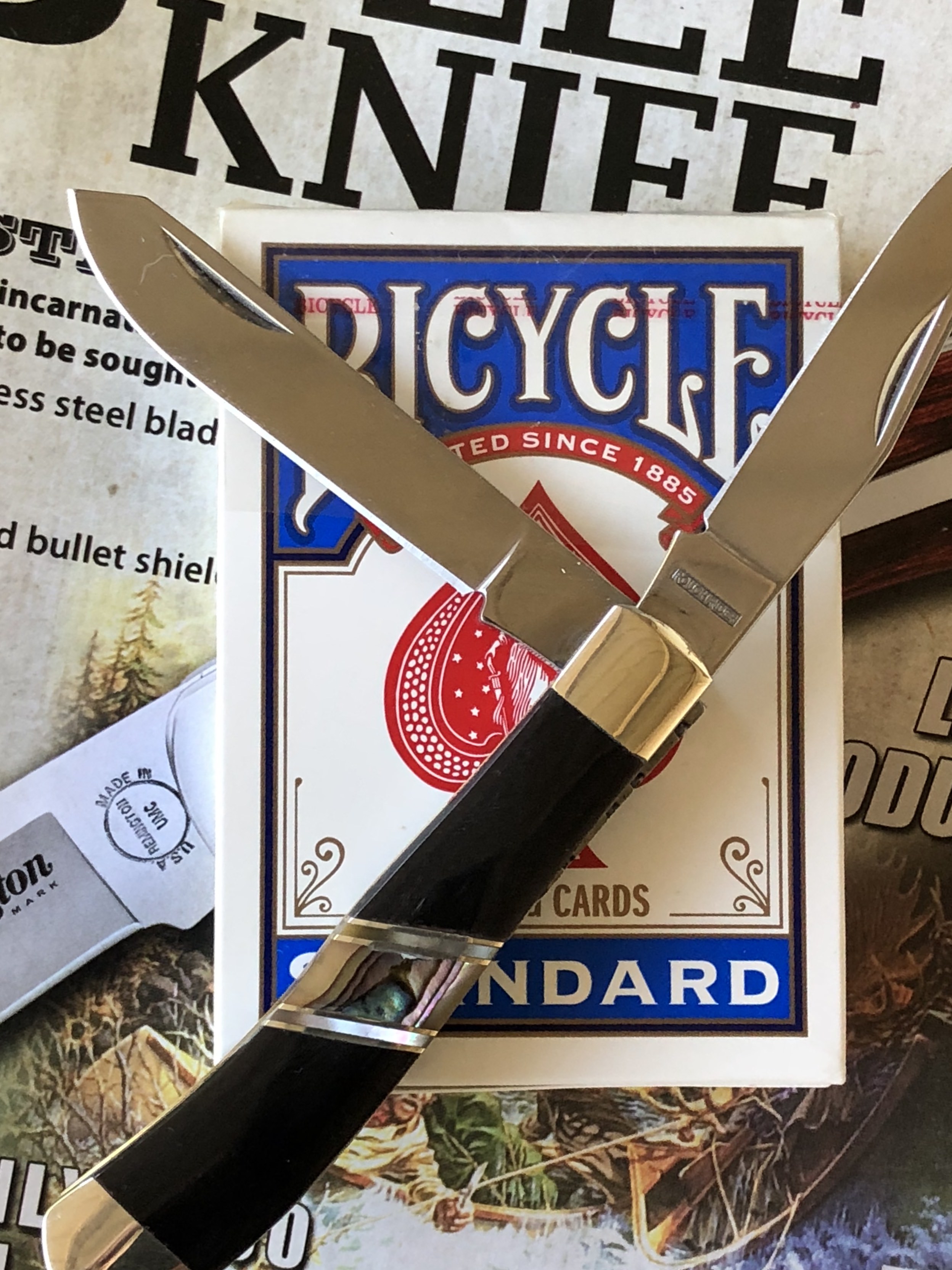 Great idea for a tread, PKJ.

I'd need to go though my collection and give it a lot of thought, .... but its early morning and I've only had one cup of coffee.
Off the top of my head these Schatt and Morgan Heritage series all bought as a group come to mind. Made in 2012, ( I believe ), sat on a dealer shelf for a few years and I acquired them when I first got into collecting in 2016. Purchased the set for $300.00, which is less than $45.00 per knife. 3 rosewood, 3 ebony and one jigged bone. Fit and finish aren't perfect on a few, one has a weak spring and a few are very nice all around. Regardless I've gotten a lot of satisfaction from having this set.

Western 854. first knife I ever bought don't recall what I payed but having it in my pocket almost every day for the last 45+ years it has to rank right up there with one of the best deals i ever had.

I've always thought that the GEC #71 Bull Nose was the best value around.
You get GEC Quality, a really good Work Knife, and one that will last you many many years... for around $75.00 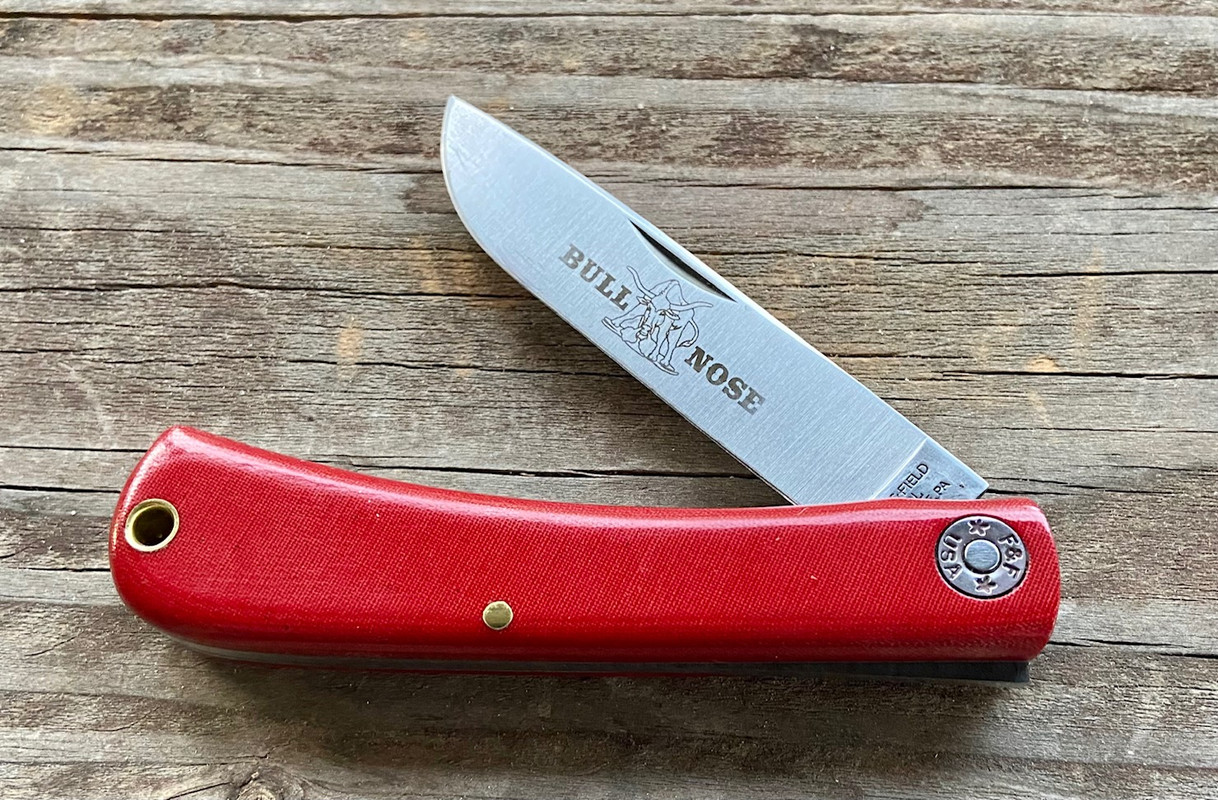 After some thought, there are two I need to share!
I dug this one out of a bin of junk at a flea market and took it home for 2$. It was rusted shut but a good cleaning revealed a great knife! It was made by Challenge Cutlery Co, a US company that closed in ‘28. Full blades with good snap, bone handles with no chips, and no loose pins!

2. I picked this one up about 10 years ago, and paid (what I thought at the time) was an incredible amount of money for a knife- about $200 if I remember correctly. But this knife is perfect- matching stag, coined edges, and amazing fit and finish. At this point, I don’t even think Richard Rogers makes slipjoints anymore and if he did they would be way out of my price range!

Late one night a few years ago I was browsing eBay and two listings from the same seller popped up: a Victorinox old cross Solo and an old cross Pioneer. Each listing included a single, out-of focus photo, and the “buy it now” prices were $9.95 and $19.95, shipped. Alarm bells were going off, but I took a chance. It was the right decision.

Years ago when I was starting to get into traditional knives, I got that 15 in ebony from

LastRodeo who sold it to me at probably the fairest price for one of those Ill ever see. Its one of my favorite 15s as I never see another one like it. Hes also responsible for that tc sawcut i had modified. Actually a lot of those knives I got at a good price until I had them blade deleted , except the little one on the farthest left, that was a gift from a friend and fellow new yorker who resides way north now.

I got this one off of the Net for $28 plus freight . Matched Stag , Integral Bolsters , and Squared Bolsters . 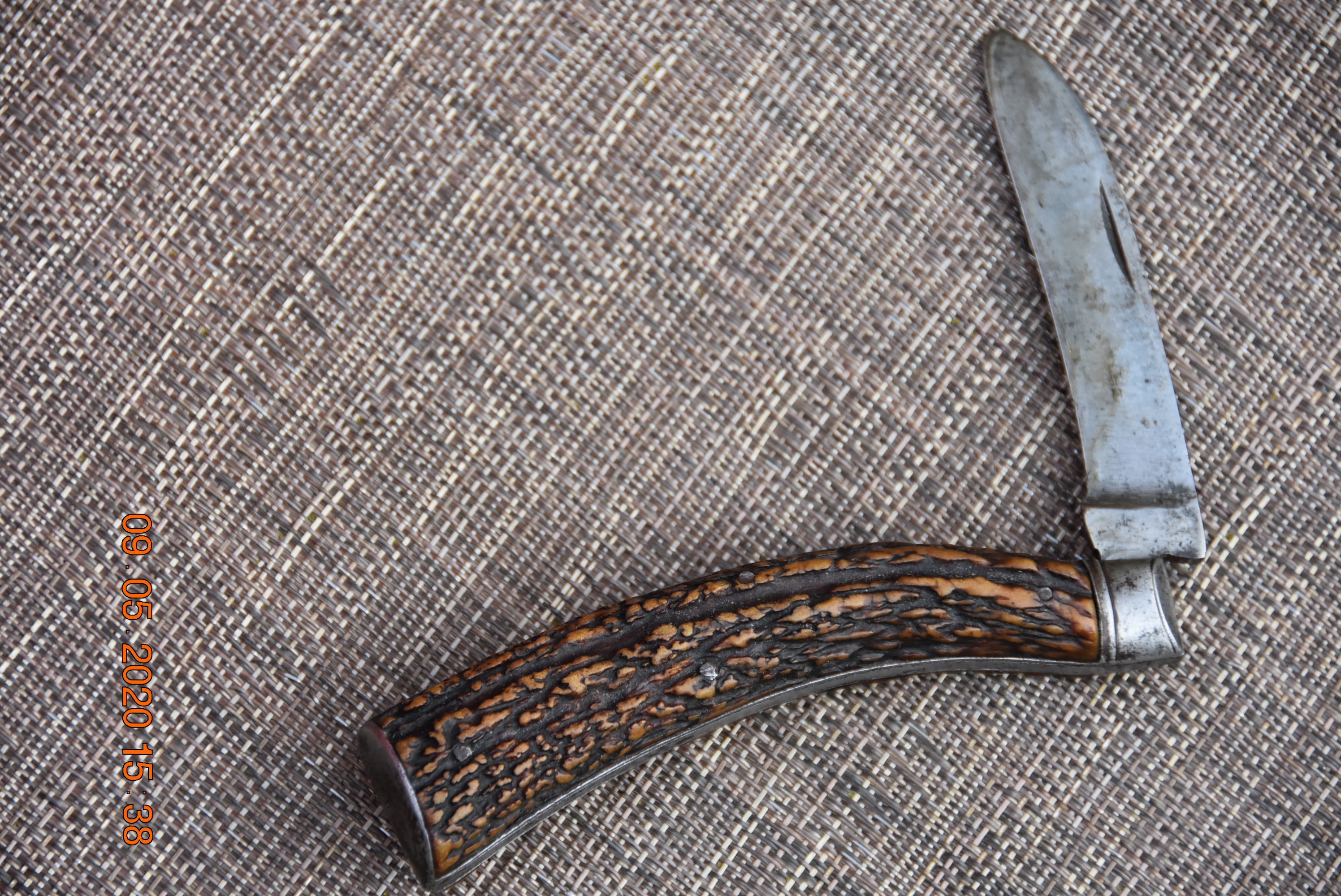 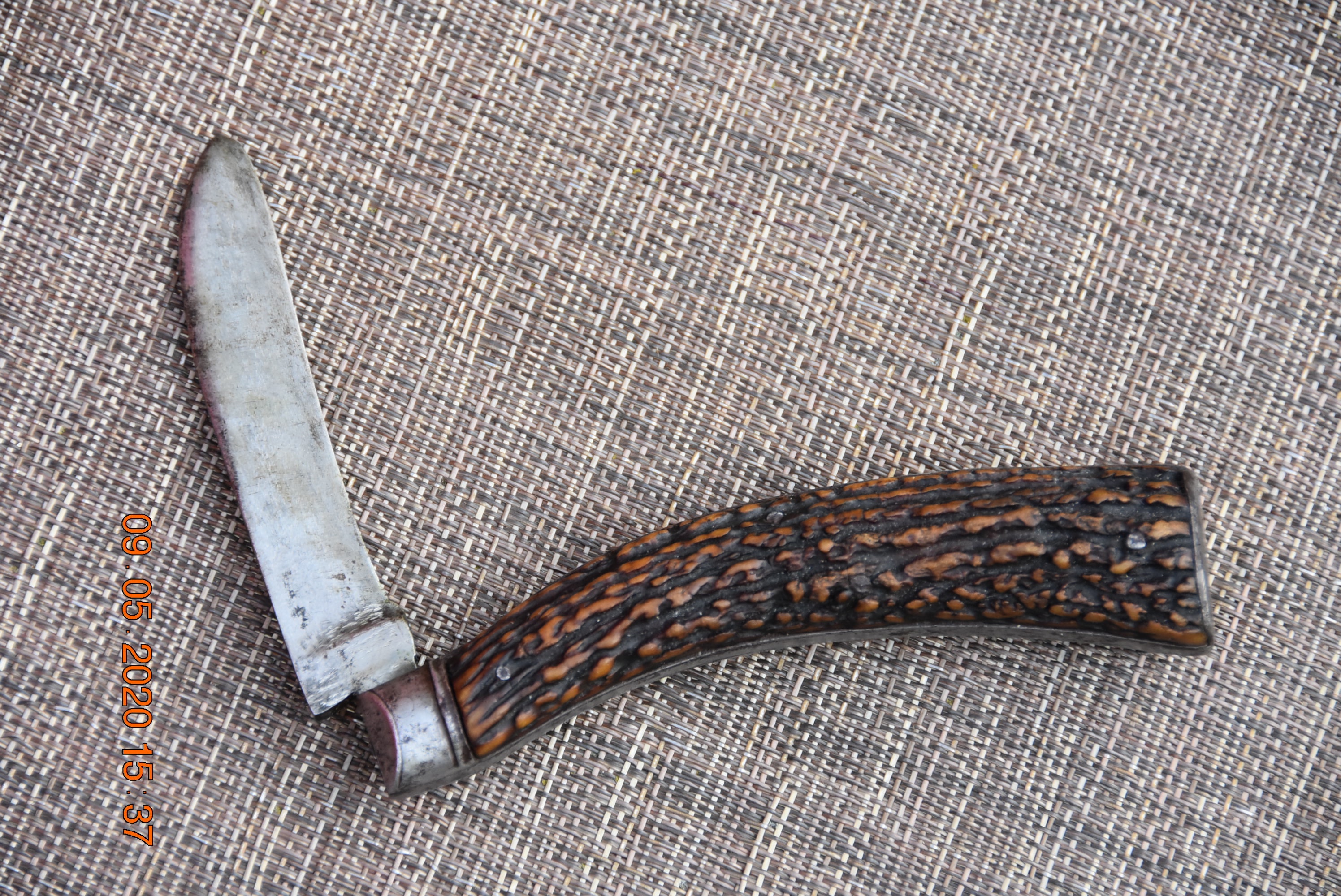 Both of these were good deals , but the little SEO&S was only $10 plus freight . Never have seen another one like it or a Russell with a Bolster that has been Double Struck . 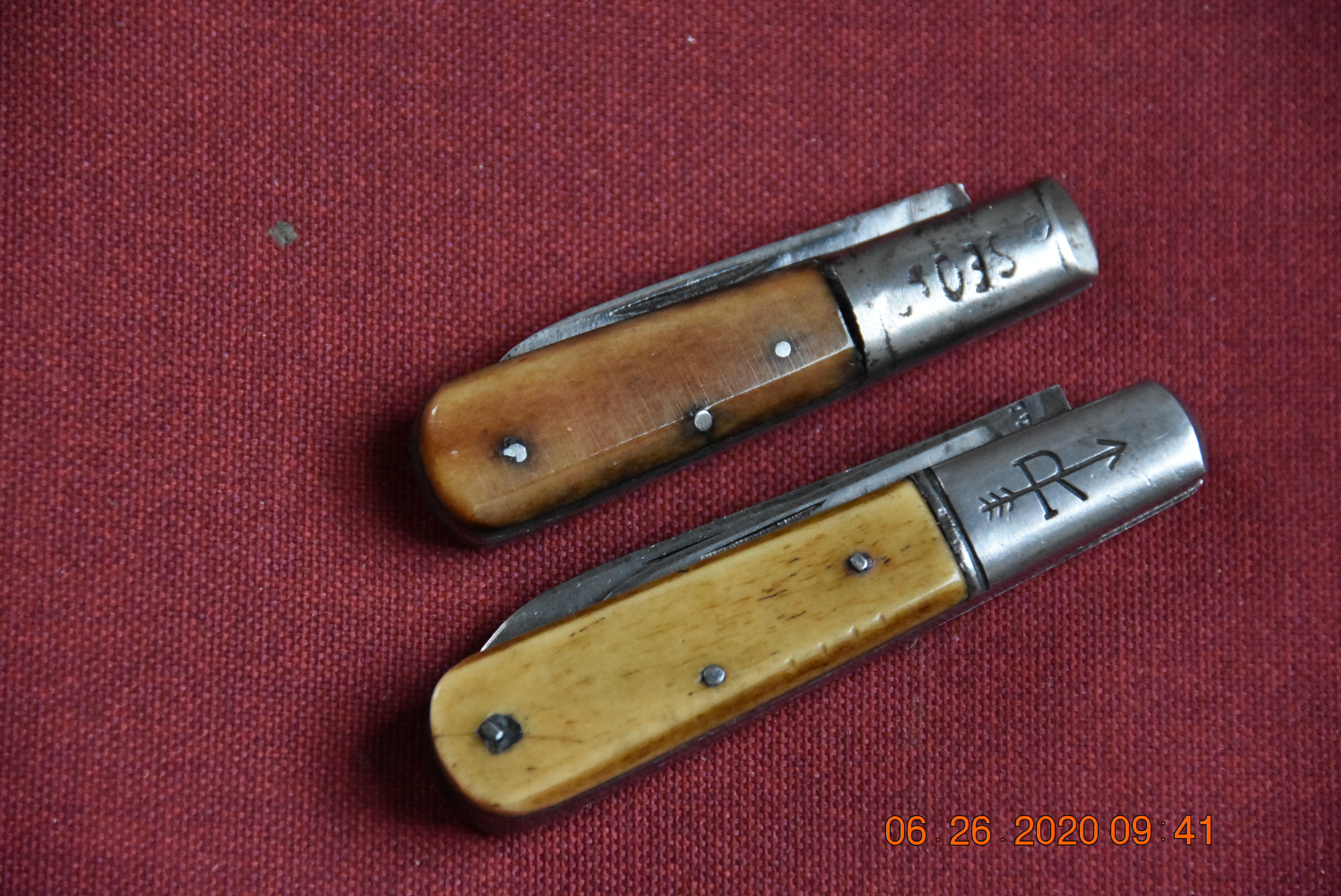 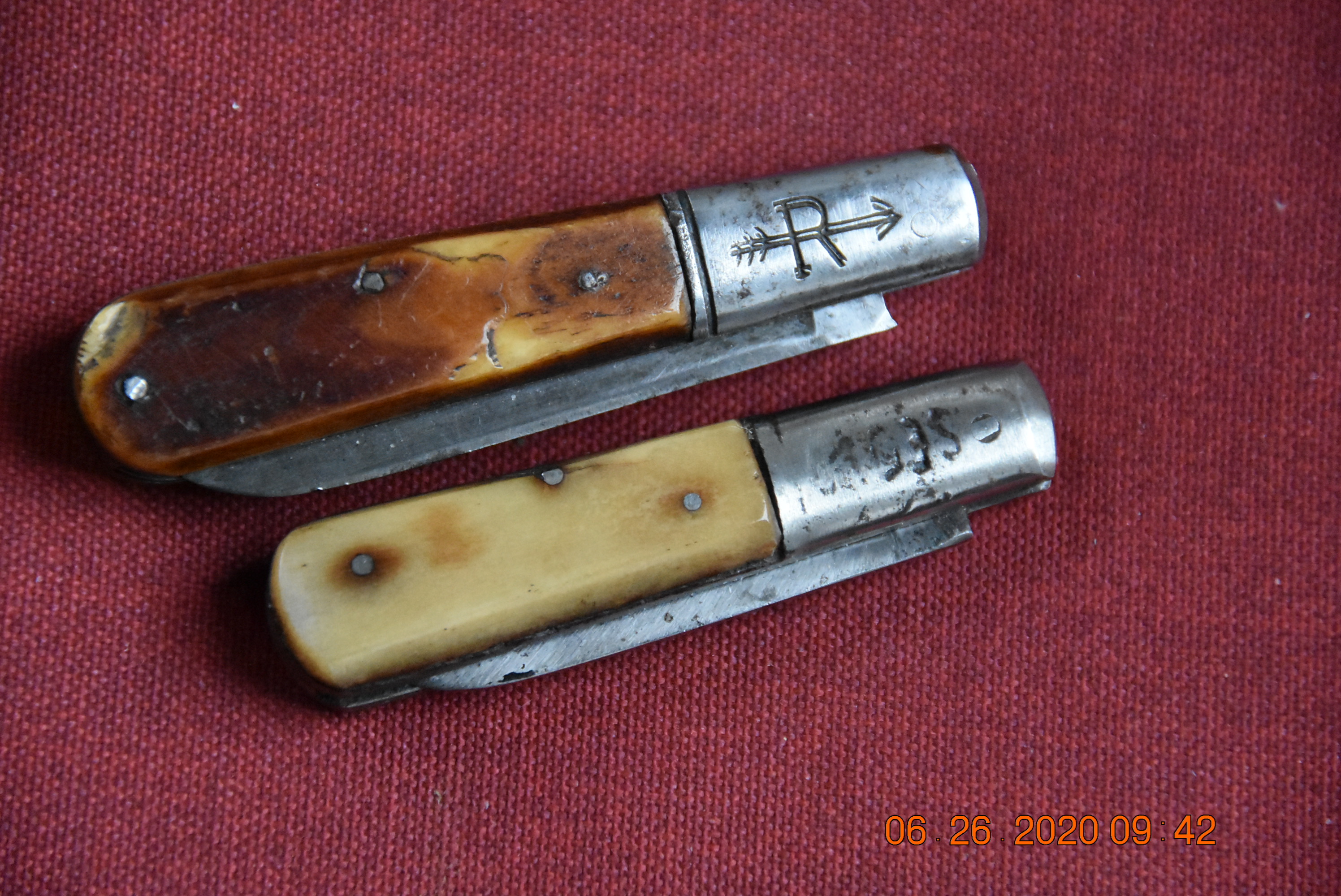 Both have to be fairly rare .

I'll play. Got this Ron Lake Design Interframe tail lock on the Exchange, from a friend and forum regular. I'd been looking for one since they came out in 2002. He'd priced it very favorably, and I could sell it tomorrow and make a tidy profit. I won't go into details on price, but it will have to get really bad money wise for me to ever part with it. It rivals the real thing in build and finish. 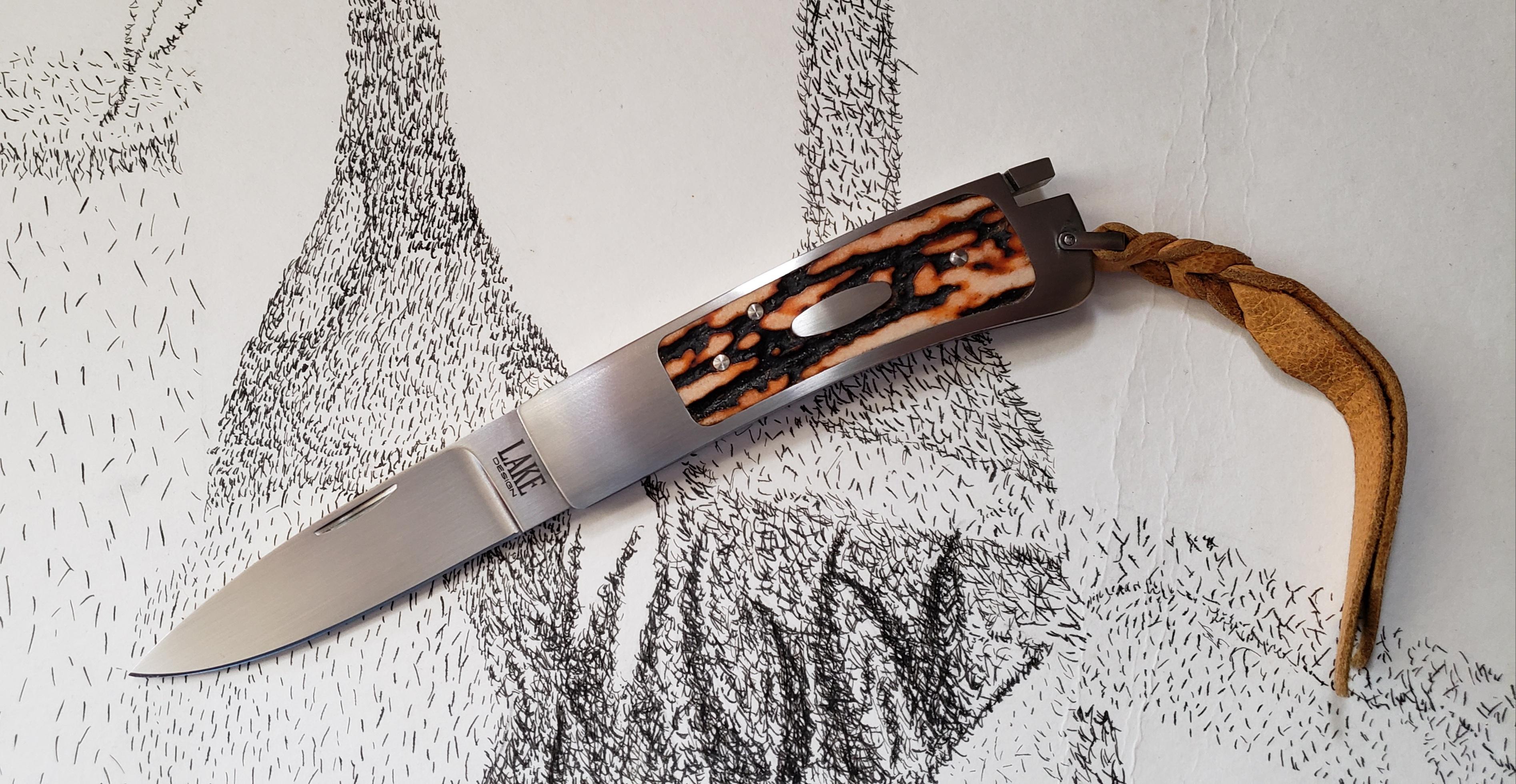 A bit ago, when I was still fairly new to GEC, I was able to pick this 62 up for about $50, if I remember correctly. It had been listed as a user, and that’s what it has been ever since! The book was a great deal, too - only $5 from a local bookstore that’s just reopened after COVID. 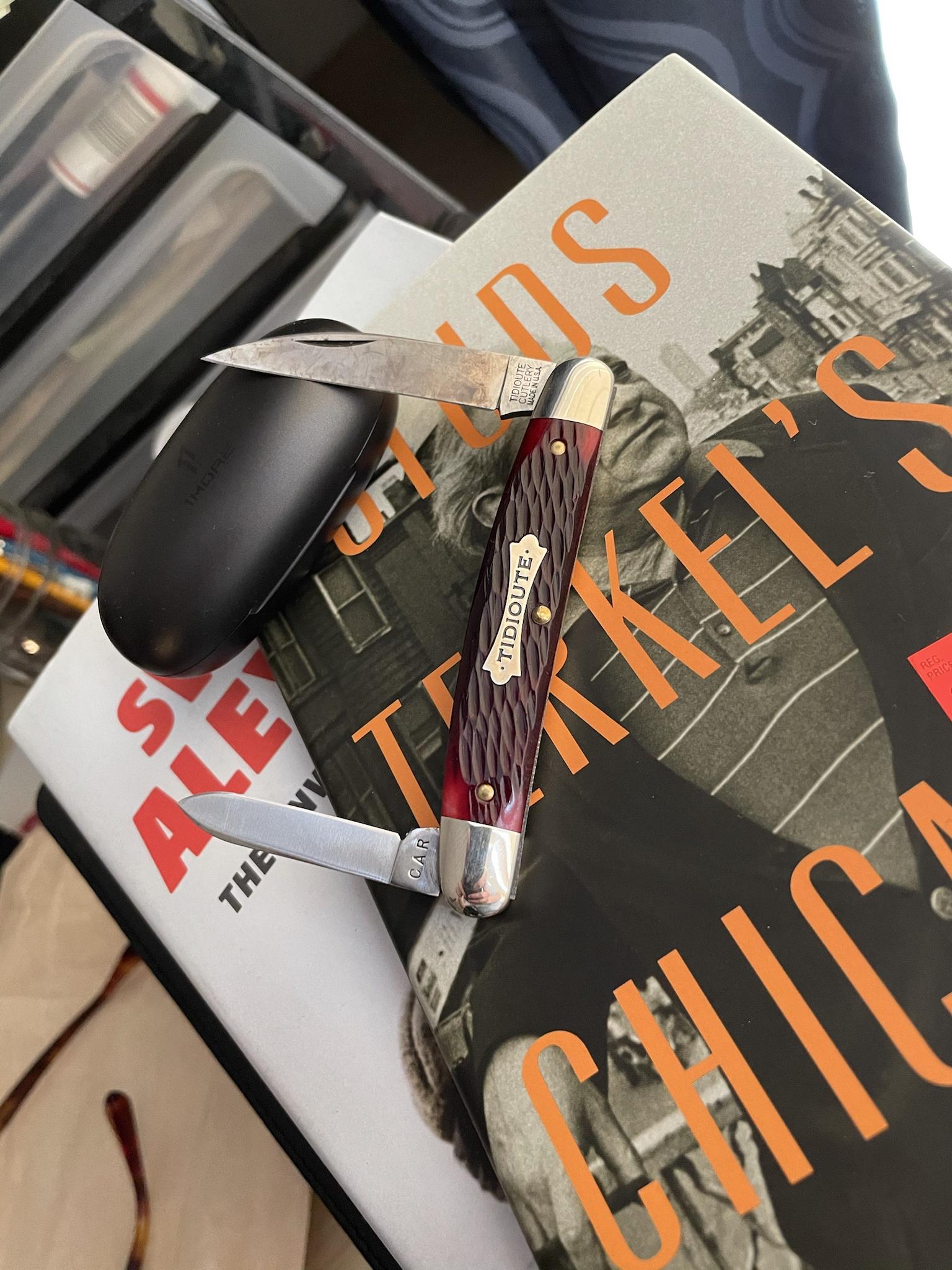 JohnDF said:
I've always thought that the GEC #71 Bull Nose was the best value around.
You get GEC Quality, a really good Work Knife, and one that will last you many many years... for around $75.00

My first Bullnose was $55 from a dealer - now THAT is what I would consider a heckuva good value. Still a superb value at $75 these days though.


Personally, it is difficult for me to determine what knives I own that make good candidates for the best deals/value. I guess one would have to determine what makes for a good value and/or a good deal (I think they are different things). Value, for me, would be how much knife do I get for my dollar - whereas with a deal, it would be like this, "Wow! I can't believe I scored this knife at this price!".

The knife that immediately comes to mind as a candidate for best deal would be this GEC #74 in Ebony. I put out a WTB ad for GEC 15s (ebony in particular, if I recall correctly). A fine member here reached out to me to offer up one he had and as a brief aside, also offered up the Ebony 74 - at a real sweetheart price, one that I would have been a fool to pass up. 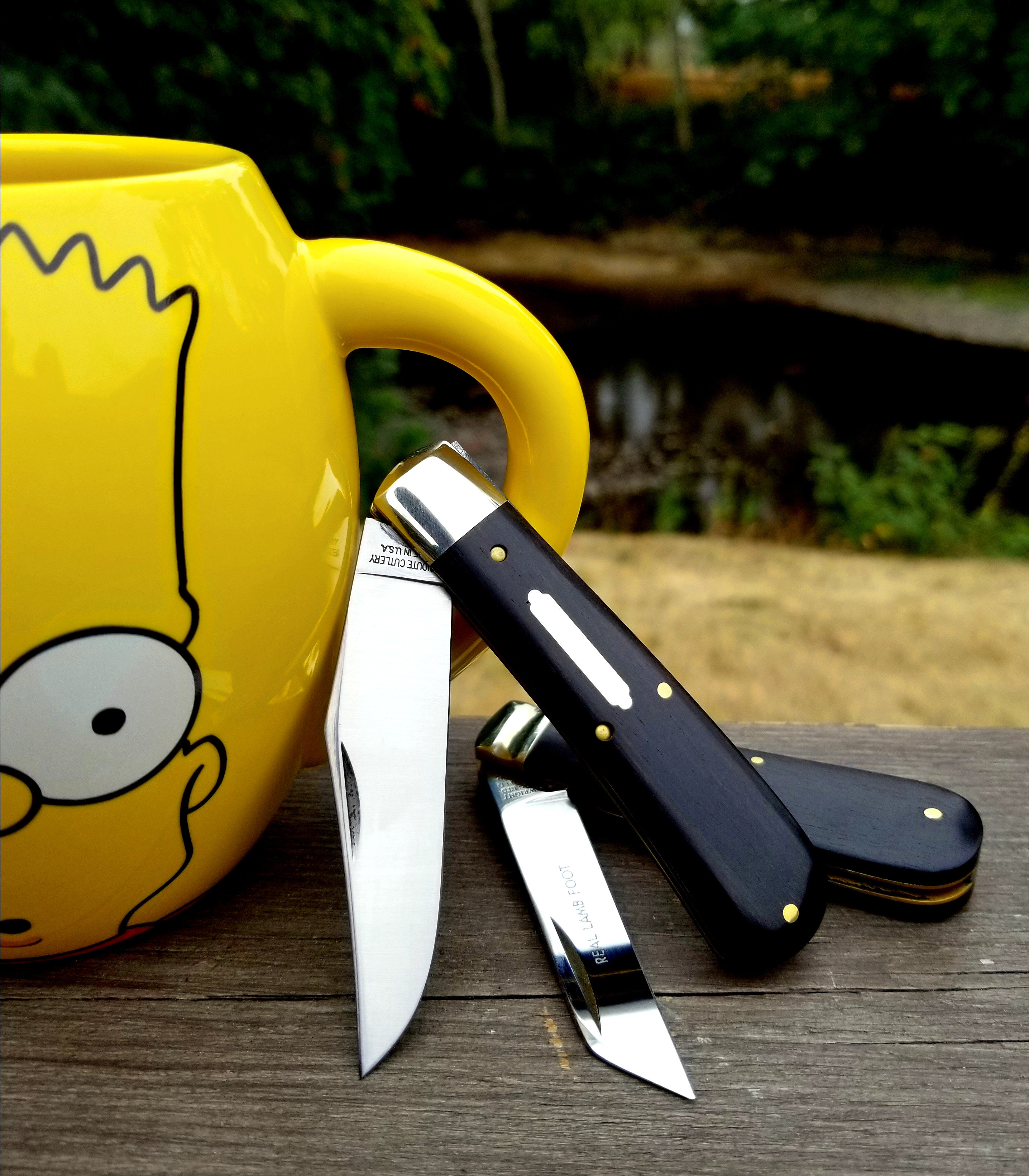 Now, for a candidate for best value, I'd have to give my nod to ol' Linus, a Lambsfoot made by A. Wright & Son. If memory serves, it cost me around $40ish, including shipping from across the big pond. I've since gifted Linus to another member here but that knife did everything - it went elk hunting with me, mushroom hunting, hiking, house projects, etc. It's a fine knife, with a value that simply cannot be beat. 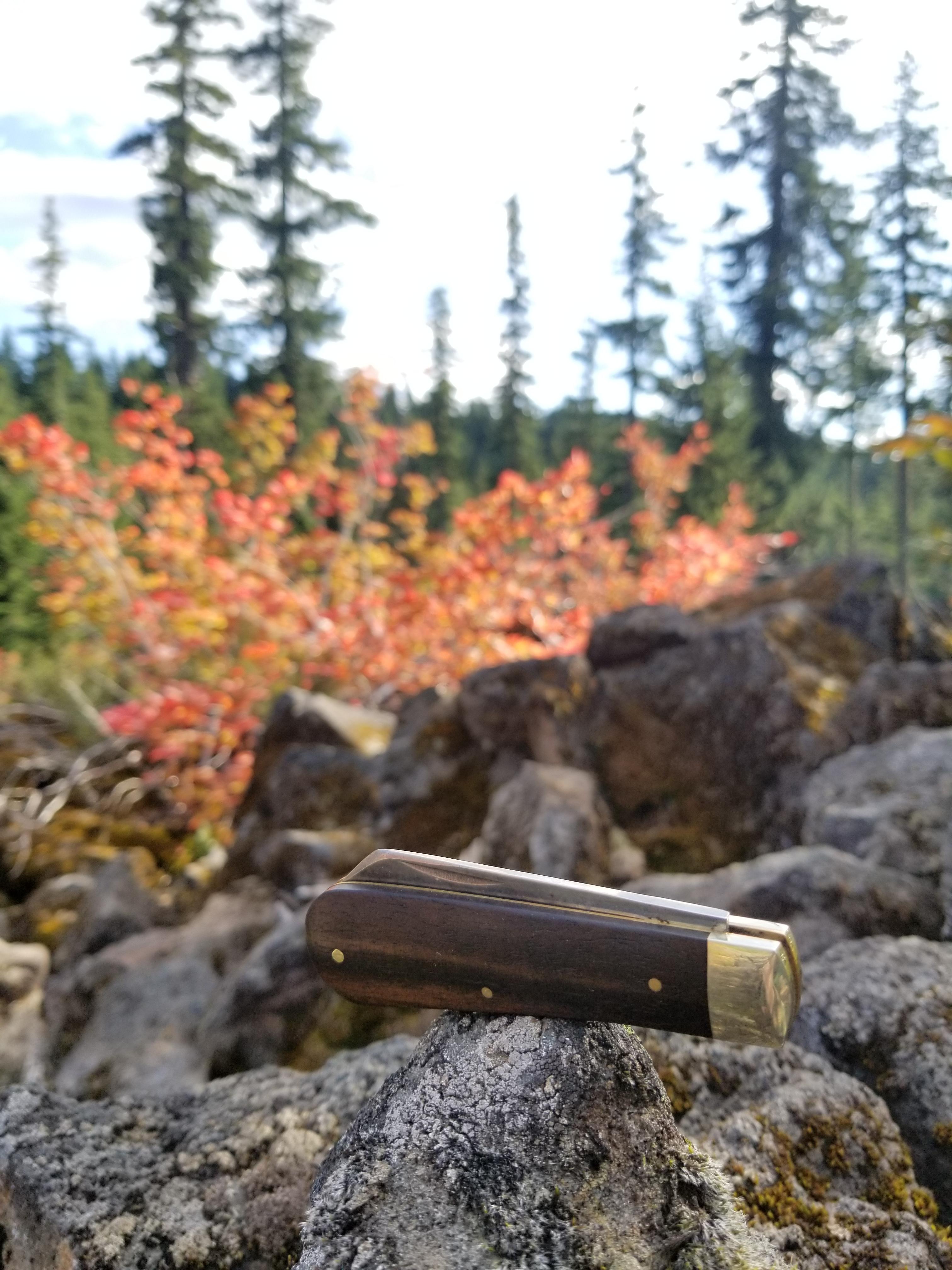 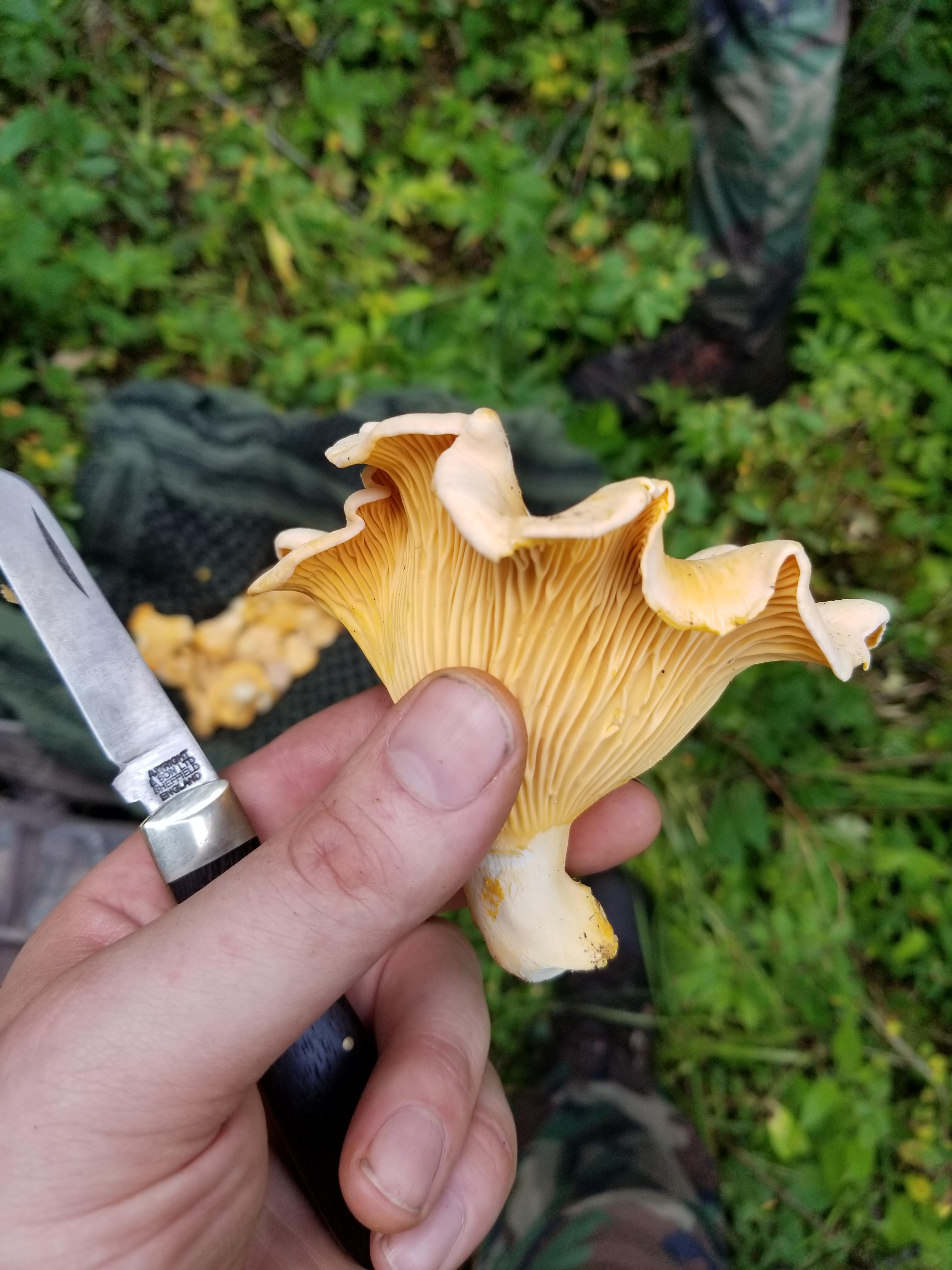