Headwinds said:
Spotted a little canoe floating in the bay and decided to give it a try. 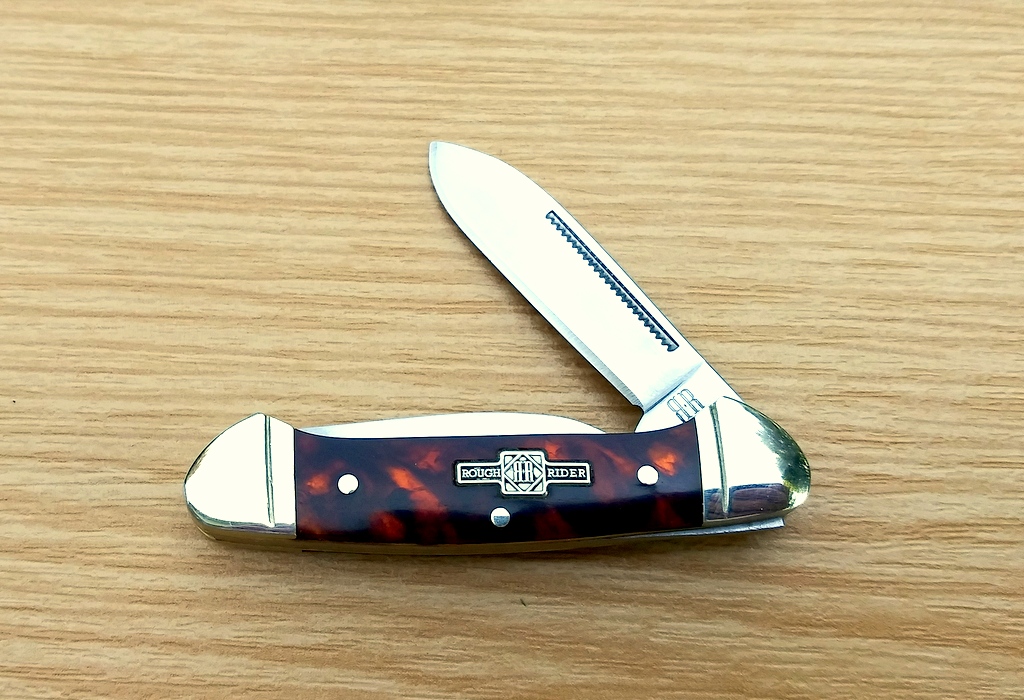 Those are sweet little knives Headwinds!

sunknife said:
That burlap has a nice look to it, Todd.

I imagine those will sell well for Case.
Click to expand...

Thanks Greg, I really like the color, just wish it had a bit more texture to it, it’s very smooth and shiny, but that’s just my personal preference. I think it will sell well and I’m looking forward to other patterns in this line.

I've carried a trio of trappers this week, 2 assigned to me by my rotation schedule and 1 a "free choice".
A Rough Rider full-size trapper fills the slot of Big Knife of the Week:

A Case Carhartt wharncliffe trapper (thanks, John) is my Miscellaneous Knife of the Week:

Both of my free choice knives this week are Rough Riders, one a smooth tobacco bone lockback medium trapper and the other a "midnight swirl gentleman's sowbelly" (thanks to Todd for both):

5K Qs said:
I've carried a trio of trappers this week, 2 assigned to me by my rotation schedule and 1 a "free choice".
A Rough Rider full-size trapper fills the slot of Big Knife of the Week:
View attachment 1638677

A Case Carhartt wharncliffe trapper (thanks, John) is my Miscellaneous Knife of the Week:
View attachment 1638678 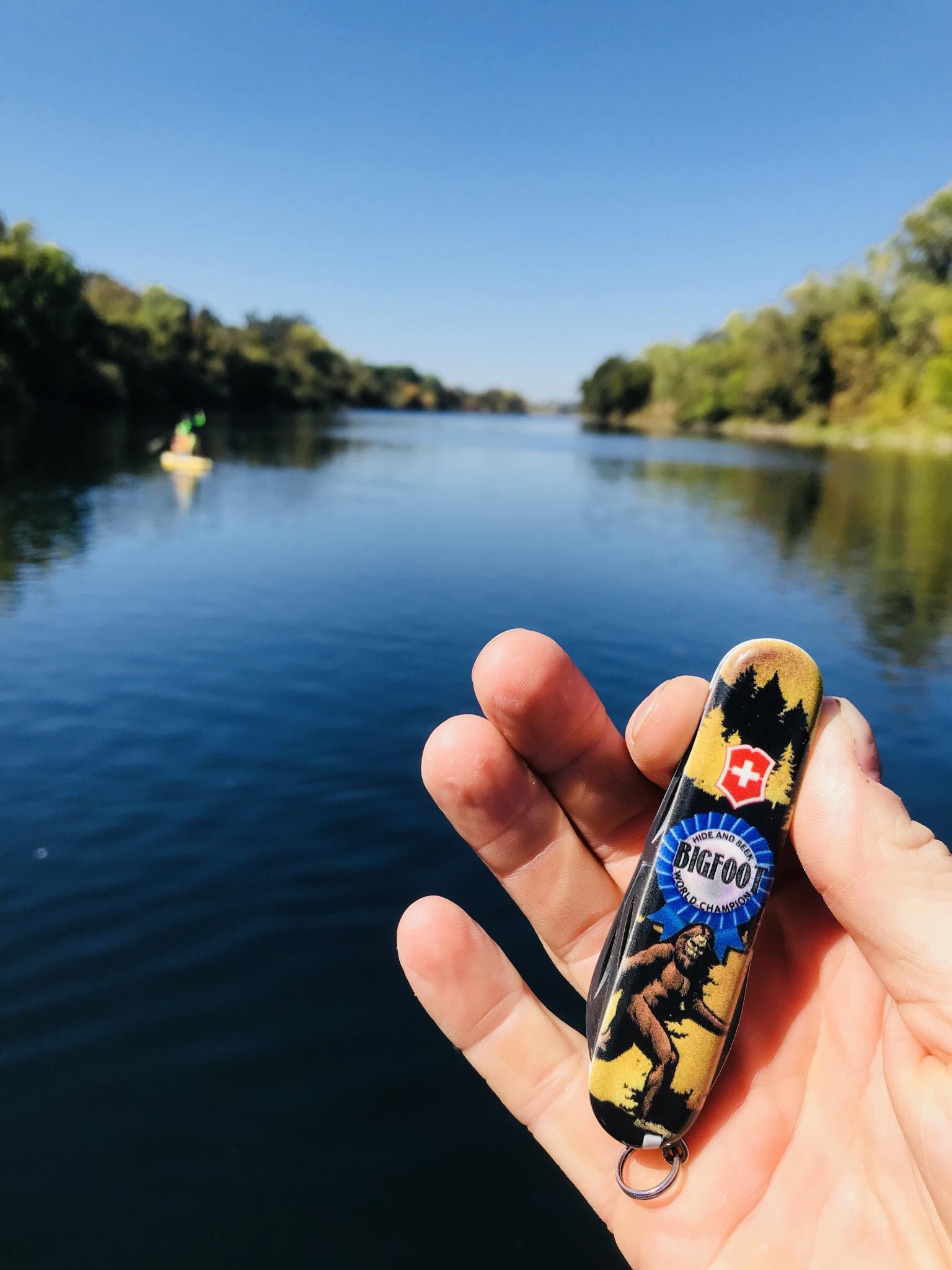 Sounds like a wonderful way to spend the day. 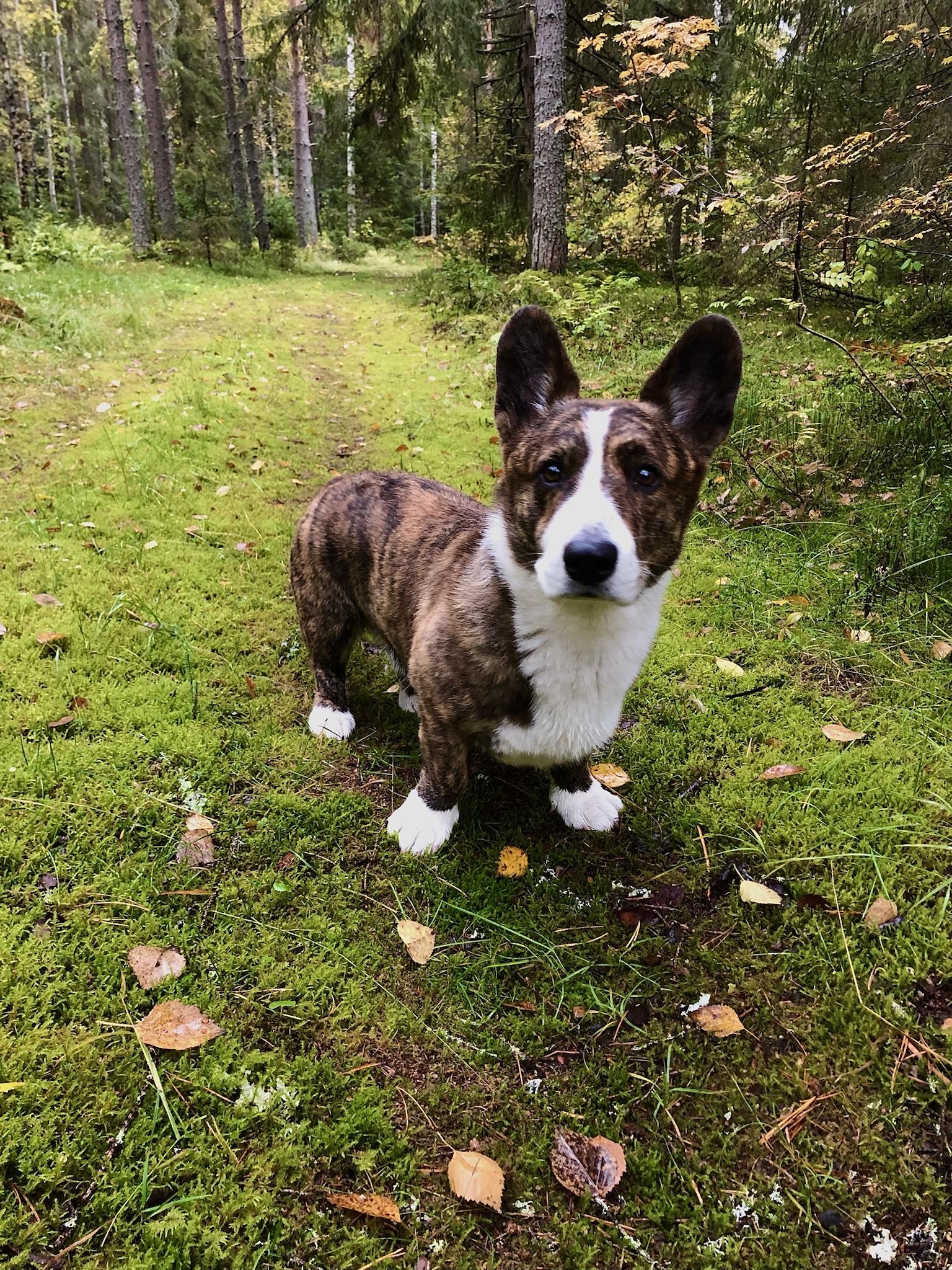 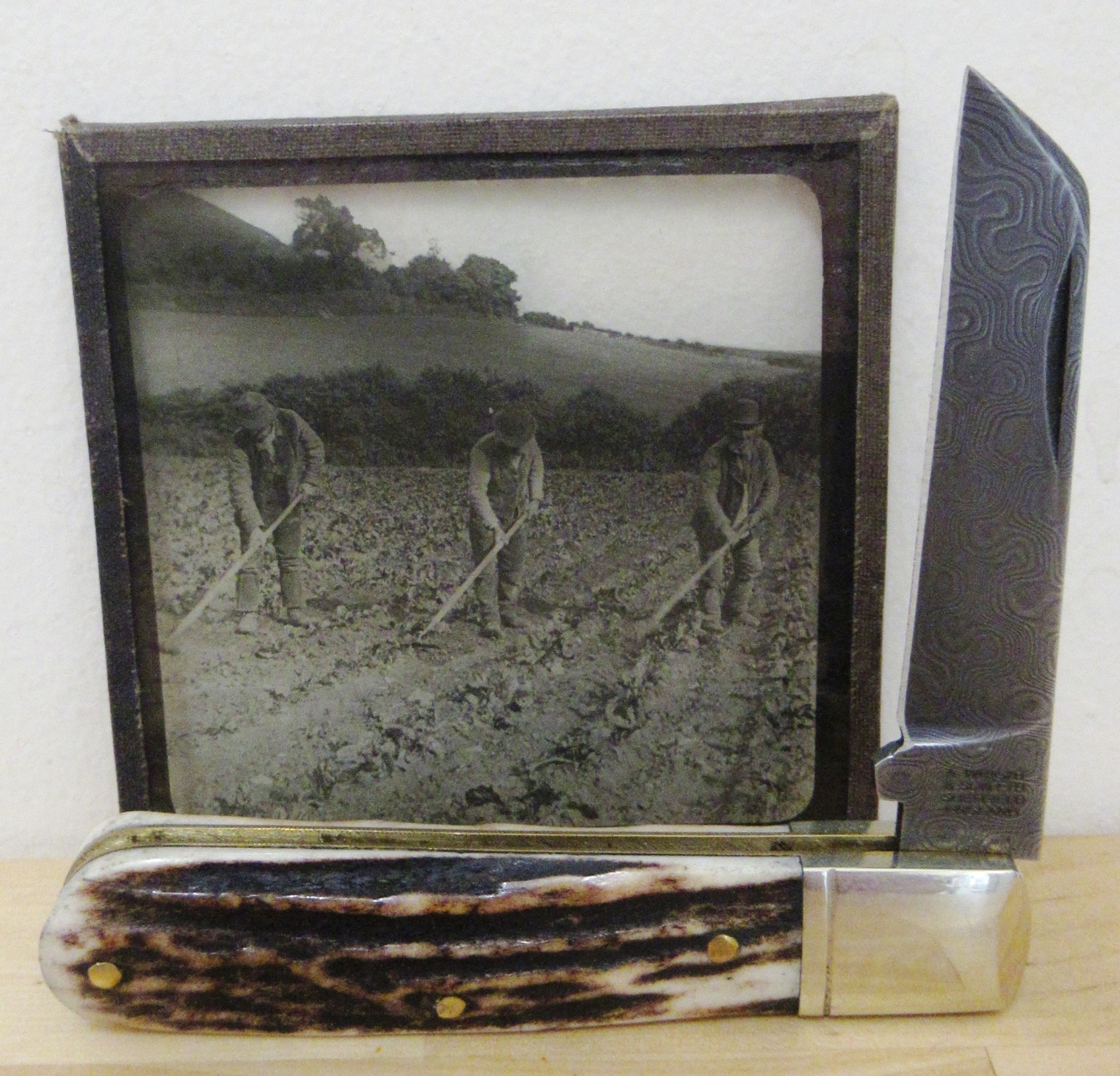 5K Qs said:
A Case Carhartt wharncliffe trapper (thanks, John) is my Miscellaneous Knife of the Week:

You're welcome, my friend.
That's still the best of the ones I gave away.

5K Qs said:
I've carried a trio of trappers this week, 2 assigned to me by my rotation schedule and 1 a "free choice".
A Rough Rider full-size trapper fills the slot of Big Knife of the Week:
View attachment 1638677

A Case Carhartt wharncliffe trapper (thanks, John) is my Miscellaneous Knife of the Week:
View attachment 1638678

Amir Fleschwund said:
The Mad Professor’s Mathematical Knife Rotation Algorithm served up a winning quartet this week.
I realize the photo of the black Spartan is not a new photo, but it is a harbinger of things to come.
And our axis has rolled enough that even as late as 7:30 am I’m not getting direct sunlight for a photo
Click to expand...

Thanks, Jeff.
It's amazing how "time marches on"!

A lot of daylight has been whittled off both ends of the day in the past couple of months; hard to believe we're only 10 days from the Fall Equinox.

For much of my life, I looked younger than I actually was. But in my late 50s, my appearance seemed to take a quantum leap forward, and since then, I've looked older than my age. Maybe some kind of Dorian Gray thing?


JohnDF said:
...
Thank you, GT.
If they had gotten the blade cant correct, it might not ever leave my pocket.

Thanks again, GT.
I spend way too much time looking for Case Single Blade Trappers on the Bay.
...
Click to expand...

At least the time you invested paid off!

r8shell said:
Thanks, guys! The little Esquire penknife pairs well with just about anything. 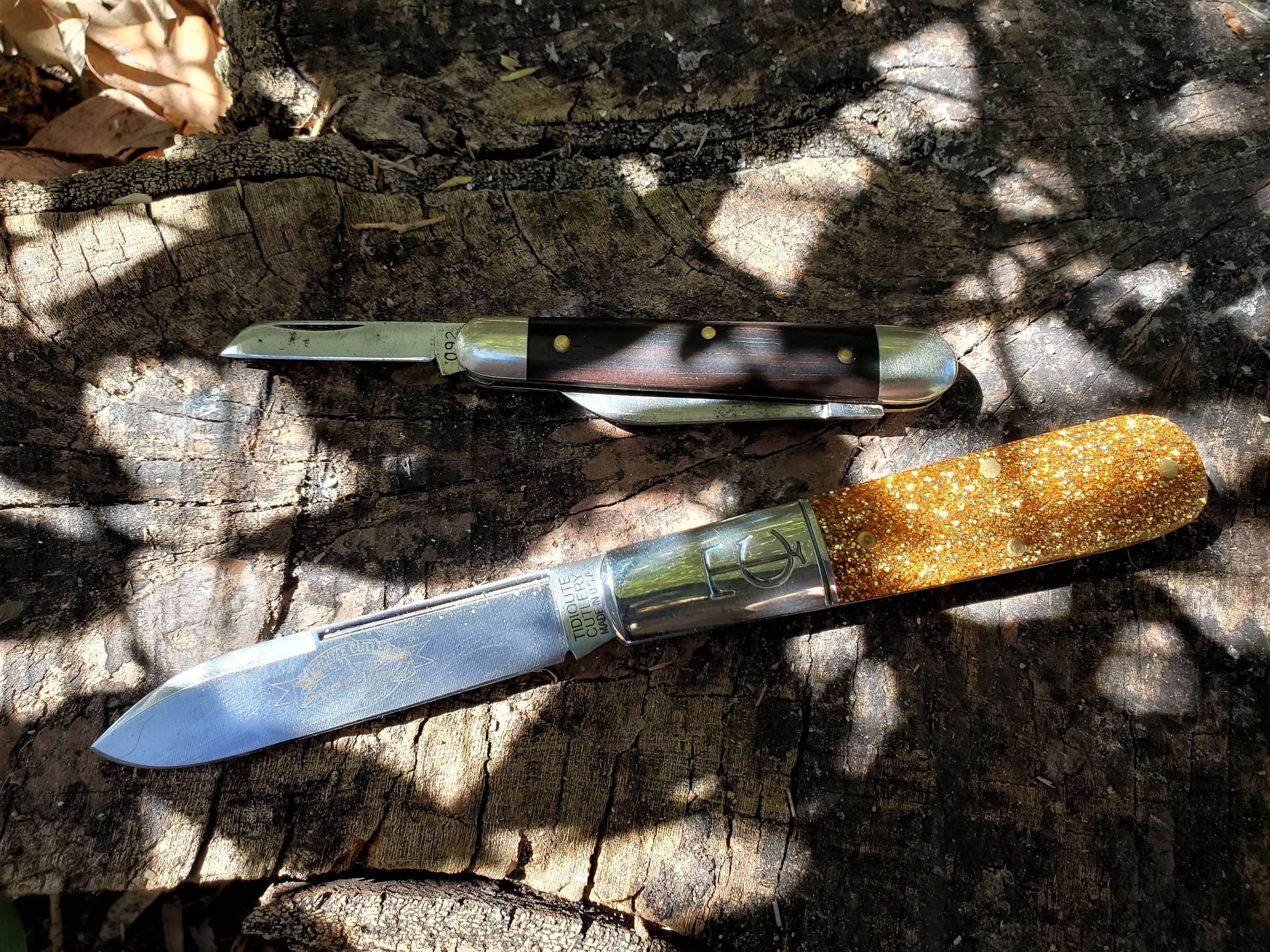 SteveC said:
Love the character on the old cross Pioneer !
Click to expand...

JohnDF said:
...
There is no replacement for that one, GT.

That Old Cross Alox is one of my favorites of yours.
...
Click to expand...

sbh06 said:
That is a fine group GT. As has been noted by many, the cross Pioneer has a great weathered look. I'm sure it has many stories that could be told.
Click to expand...

Thanks for the Pioneer praise, people. Definitely one of my best finds, although it now looks almost as it did when I first found it in an antiques store, so I don't know any more of its stories than you do.


Amir Fleschwund said:
Carpenter’s Whittler and Bullnose today. View attachment 1637442 This hat has seen the ticks and chiggers of Ft. Leonard Wood, the mosquitos of Ft. McCoy, and the dust of the Hindu Kush. I like to wear it sometimes.
View attachment 1637443
Thinking I may hit the river today. You guys talking about fishing...

rcs86 said:
Well, I was supposed to be on the road with the wife and kids to hit up the Georgia aquarium today, then Savannah, and onto Hilton Head Sunday. Ours youngest tested positive for RSV yesterday so we are giving her a couple days to recover at home and going to leave on Sunday. Decided to come into the office today to save some vacation time. Got the Hayn' Helper along for the ride. Hope everyone has a nice Friday! 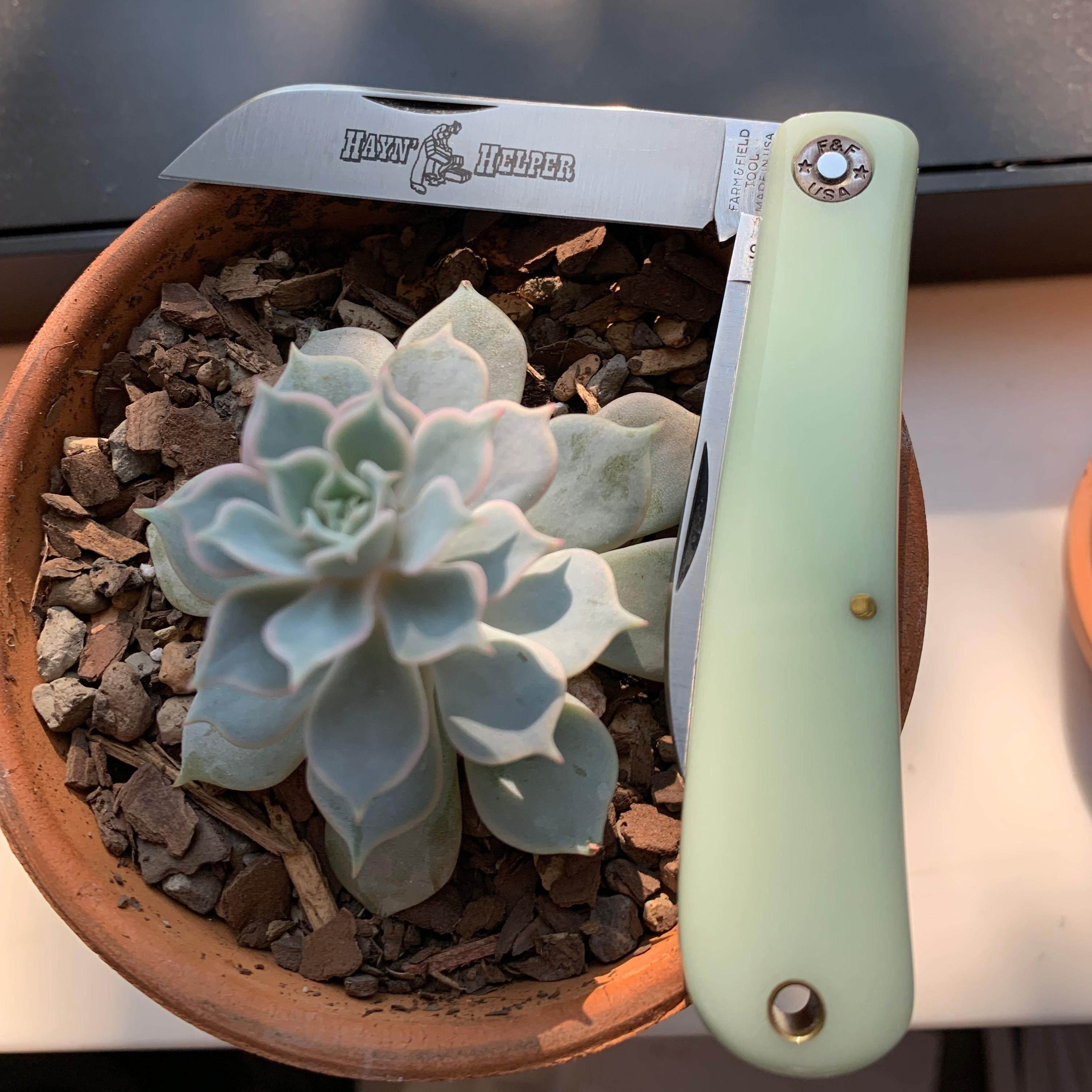 I hope your daughter is feeling better by now and that you'll be able to get away for a while as planned.
Hay'n Helper is a heck of a knife!

pmek5 said:
Have a great weekend everyone. 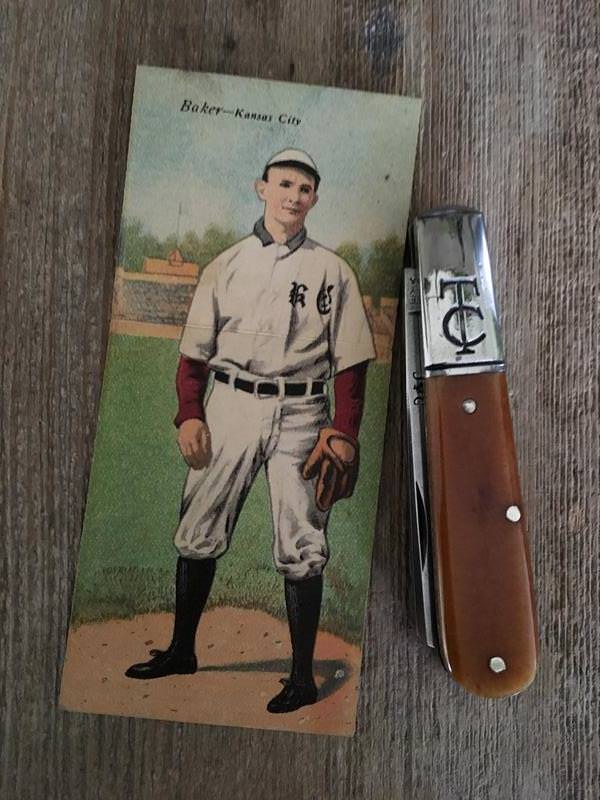 Who's on the baseball card? My first guess was Home Run Baker, but I'm not aware of him ever playing for a Kansas City team.


mac62463 said:
Fieldmaster SAK just like every other day for as many years as this model has been available ( I can't remember what I did yesterday). I've beat the crap out of several of these over many years and when I wear out I gift it to some kid and get me a shiny new one. I have a rotation of fixed blades but I can't live without my Fieldmaster.
Click to expand...

I still haven't picked one up, but I decided several years ago that the Vic Fieldmaster would be the optimal SAK for me in terms of toolset and price.


Pàdruig said:
It's been a spell since I've posted in this thread. My daily carries aren't overly varied in recent months and I haven't had a lot of time to devote to pictures anyway.

Thought I would take a break this morning and share - a #43 Oregon Trapper and a Jack Black SFO (Hartshead Barlow) for me today. Oh, and my 5th cup of coffee...
...
Click to expand...

Congrats on having that priceless heirloom!

Old Hunter said:
I appreciate the kind words. This was my first blade cut and my first nail nick - you heard right about the nick!

Always appreciate your comments Greg. That whittler knife is typical of mid-70's to late-80's Case - a unique bone color for each side!
Click to expand...

I didn't even realize the whittler had different bone color on each side; I though it was just due to different lighting or something. Thanks for teaching me something!

Jon0385 said:
That is too awesome. He mentioned growing up in Michigan and Al Kaline in his speech. I think he was too overshadowed by Bench Fisk and later on Carter. At least it’s fixed now.
...
Click to expand...

(Jeter was a Michigan kid, too - hard to swallow him wanting to be a Yankee. 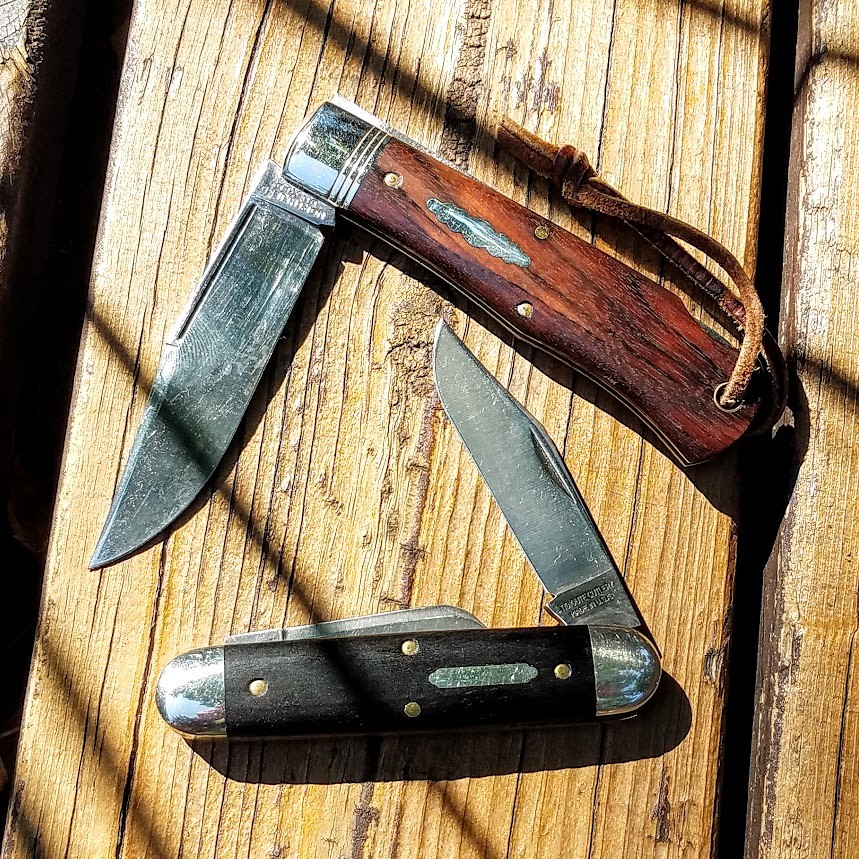 Not as old as many of the knives you post, Steve, but kind of "instant classics" (especially the Churchill IMHO)! 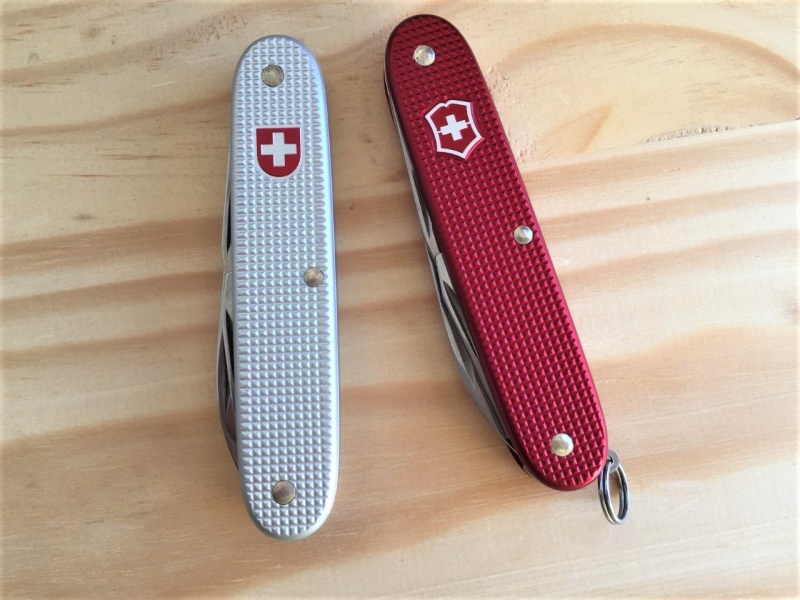 Yet another notable pair, Todd!


PoleMonkey13 said:
Today it was a case canoe in peach seed jigged bone.
Click to expand...

I'm always compelled to compliment someone who carries a canoe!

5K Qs said:
But in my late 50s, my appearance seemed to take a quantum leap forward, and since then, I've looked older than my age.
Click to expand...

My hair has been turning grey since I was in my 20's
By my 40's I was completely grey and people would tease me.
Now that I'm in my late 50's, people are jealous that I still have all my hair.

I'm excited for the start of football... Go Hawks! 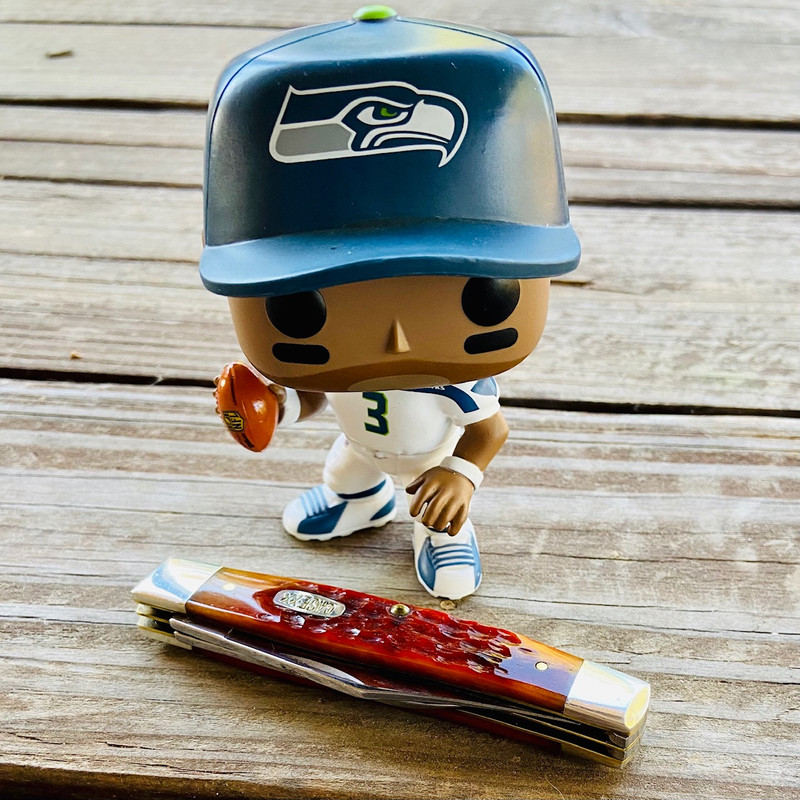 My Usual Lamb and Case Texas Jack will be watching the games with me. 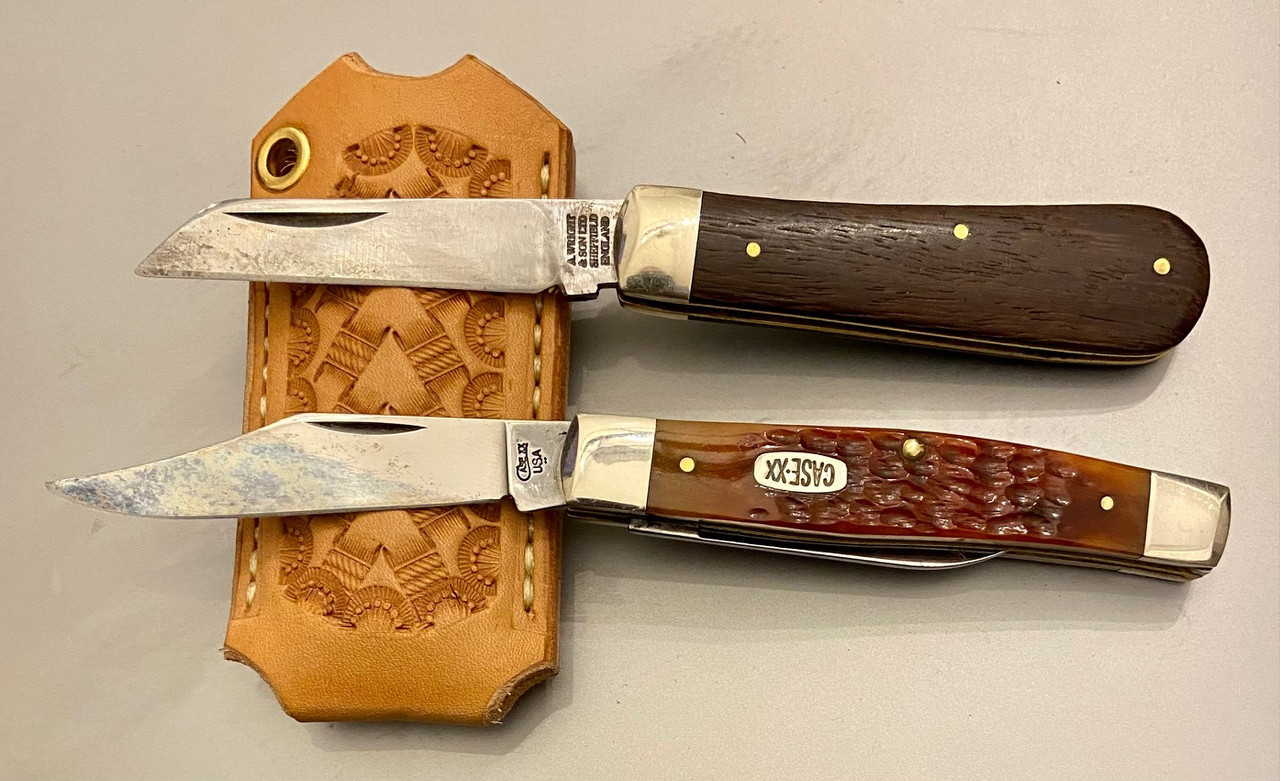 Thanks John, I do like it a lot even though a full sized trapper with two blades really isn’t my thing, but a first for Case so I had to have it.

My Usual Lamb and Case Texas Jack will be watching the games with me.

Carrying an "experienced" Sears Craftsman (Schrade) 95044 1977 vintage Premium Stockman today. Carbon steel blades, white delrin handles, solid walk and talk plus a good patina is forming. This one checks all the boxes for a good user.

Thank you very much, I tried to send a PM with the store's website, but it doesn't enter. Is your mail full?

Thank you one more time, Gary. 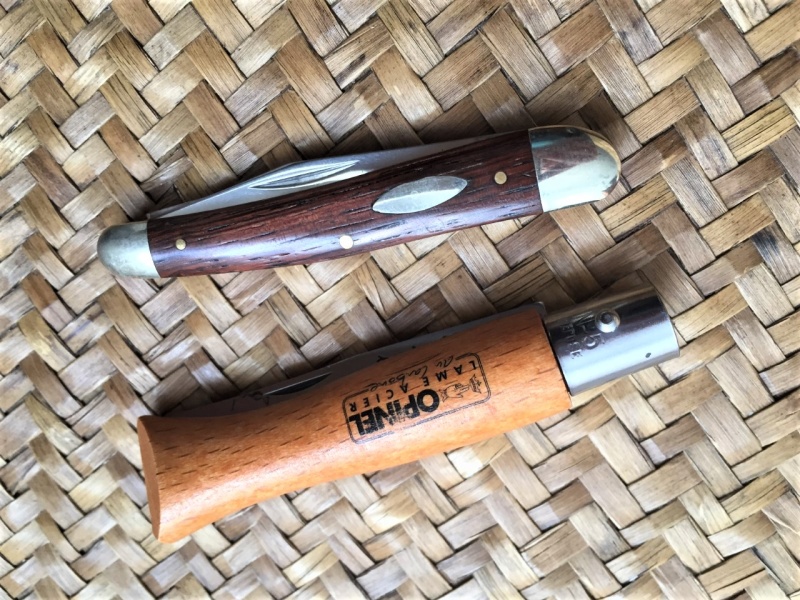 Have a nice Sunday.

I'm up and about this morning and got my pants on so, it's the Remington again today. It's not so much the knife itself I like but rather the Muskrat blade. Anyway, it's a capable knife for most things I'm likely to come across.

My game day jersey and knife