I use a Lansky 5 stone diamond set for most of my sharpening and the Sharpmaker just to touch up an already sharp edge. this combo has served me well. when I got the Spyderco system, probably 90% of my knives had been sharpened on the Lansky using the 20 deg. slot. When I touch up on the SM, I've only used the 40 deg. slots and I've been very please with the results, but unless I'm missing something this is hitting the same metal on both devices. If I ever have to reprofile and edge due to not liking the factory grind or severe dulling is there a better option than the 20 deg. slot on the Lansky to go with more of a "micro bevel" on the SM?
P

DPS depends on what you need, typically, for thin slicing knives and kitchen knives, people go for 15-20 deg, for hard use knife that you'll beat the crap out of it, people usually go for 20-25 deg.

What do you use for reprofiling blades? Nearly every knife that I clamp up in my Wicked Edge 130 the first time needs to be reprofiled.

PMQ said:
DPS depends on what you need, typically, for thin slicing knives and kitchen knives, people go for 15-20 deg, for hard use knife that you'll beat the crap out of it, people usually go for 20-25 deg.
Click to expand...

olddogrib said:
If I ever have to reprofile and edge due to not liking the factory grind or severe dulling is there a better option than the 20 deg. slot on the Lansky to go with more of a "micro bevel" on the SM?
Click to expand...

My question was worded poorly. It's simply "is the 20 deg. slot on the Lansky clamp the same angle as the 40 deg. slot on the Sharpmaker as far as orientation? It hits at how we've complicated the way angles are referred to with terms like inclusivity, obtuse, yadayadayada. FYI, I did quite well in geometry, but I measure sharpening angles by an imaginary line through the center of the blade, apex of the edge and the intersection with the line/face of the sharpening media......not the angle formed by both edges of the bevels, which would be twice the angle I'm describing. I don't see myself truly "reprofiling" an edge as the term is used here, most are in the realm of 20-25 deg. and those slot have sufficed on the Lansky. I'm low-tech and the Sharpie trick is what I use if I think I'm hitting "shoulder" as opposed to edge. But I've never quite understood the reluctance of factory and some custom maker to disclose what angle their grinds are at.....unless it's a method that doesn't lend itself well to measurement in the first place. I can freehand quite well and that's all that was available in my younger days when I had to take driver's ed on a dinosaur. But at my age I have better ways to spend my time...I ain't got that much left! IMHO, my greatest gains in sharpening prowess came with systems that enabled maintaining angle consistency. That was Lansky (I know, so yesterday) and that's why I continue you to use them. Yes, I know there are systems that offer "infinite" angle choice as opposed to pre-stamped 17, 20, 25, and 30 deg. slots. If that "flips your trigger" to each his own. I'm just not that "anal" (read I'm a tight-ass) and won't pay more for the option. I supposed my question also touched on the issue of grind type and whether one long primary bevel is as good as a primary bevel with a secondary "micro-bevel" at the apex......but it was not my intention to wander off into those woods. But wander if you lust.

Sharpie your knife edge and find out.
B

I got get by the blade bug a couple of weeks ago and have put together a few entry-level blades in that time. Most are AUS-8 or 8Cr13MoV, but today I bought my first quality steel blade - a Spydie Sage 1 (S30V). And while the knife is quality, the factory edge wasn't the sharpest. So I'd like to...

www.bladeforums.com
knife with a blade width of 1/2" 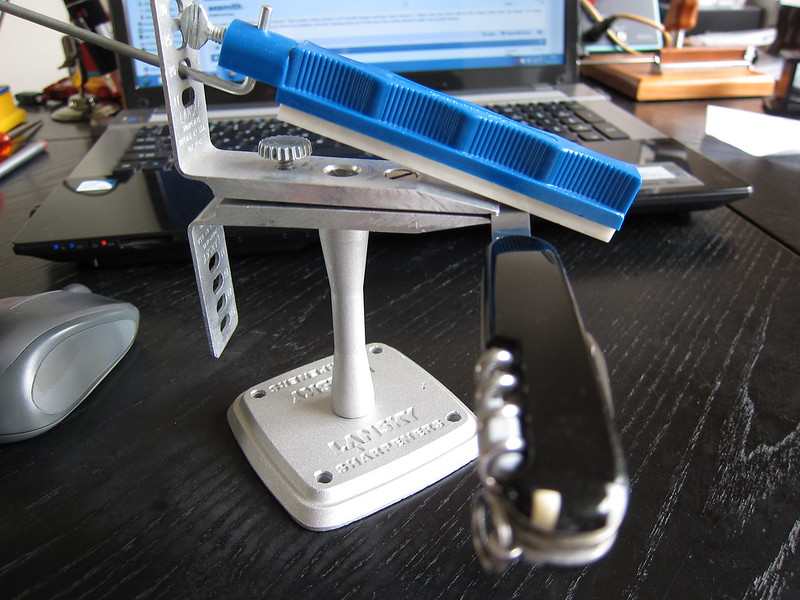 BTW The angle settings on the Lansky clamp are just an indication and the actual angle will depend on how far the knife sticks out from the clamp. With this knife the actual sharpening angles are:

is the wicked edge worth it?

so is the wicked edge worth the 300+ dollars? what makes it so different from the lanksy system? does it work better or is it just all talk? 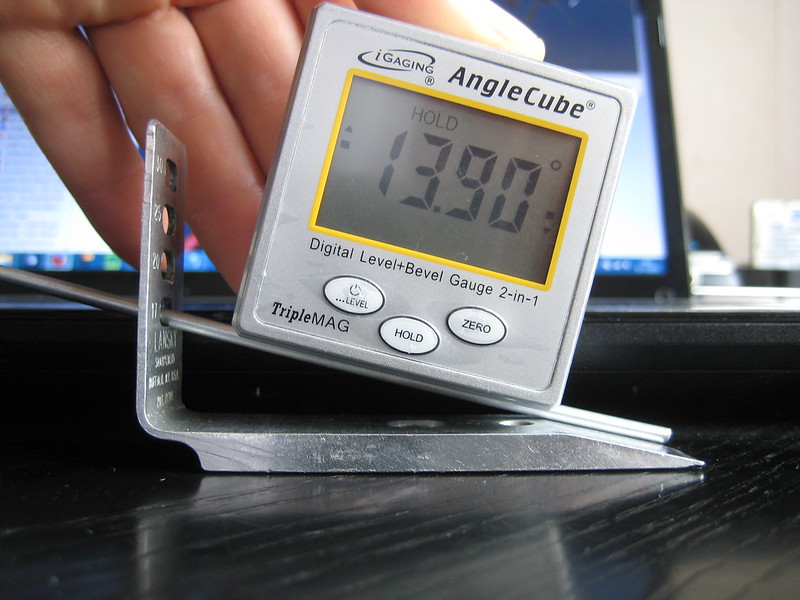 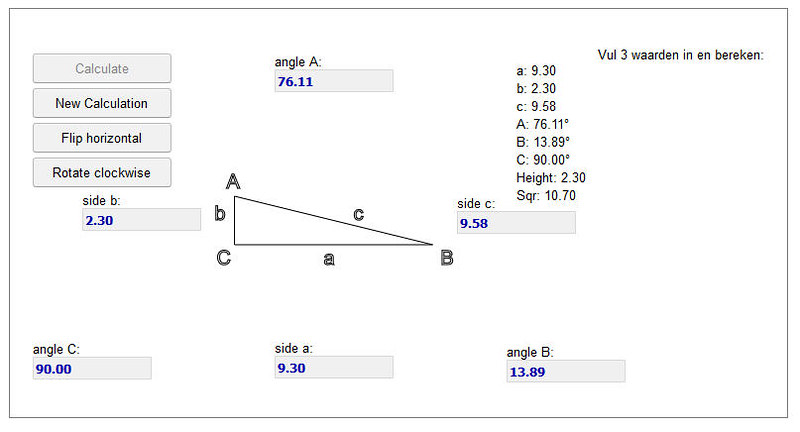 The wider the blade, the shallower the angle gets.

Hello everybody, Overall, I love my Lansky sharpening system. Problem is: I got myself a nice Japanese VG-10 petty knife and even the 17deg option in the Lansky clamp is too obtuse. How safe is it to drill an additional hole in the Lansky clamp? Is that going to affect its...

There was a problem with the design of the soft-grip-clamp and with smaller knives, using the 17 degrees setting resulted in hitting the clamp.

The 17 degree setting on the original clamp results in an actual angle of less than 14 degrees with small knives and even lower with larger knives.
O

Bucketstove, I have the original clamp without jaw padding. Thanks for the good info and that is a cool digital inclinometer. I need one of those...and I could have answered my own question. Another minor complaint of the system is that I'll sometimes find a guide rod that is square, but when the thumbnut is tightened it'll slightly misalign the face of the stone, but it can be remedied.
You must log in or register to reply here.
Share:
Facebook Twitter Reddit Pinterest Tumblr WhatsApp Email Share Link
Top
Change Ad Consent Do not sell my data