I’ve got a house full of bacon, I’ve got bacon awaiting shipping, heck I’ve got bacon in my car and in my pockets, but there’s no bacon like new bacon, BRING IT JERRY!!

Speaking of bacon...
Every year at about this time, Hatch Bacon is available at the local H-E-B. 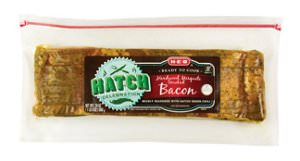 H‑E‑B Hatch Green Chile Hardwood Mesquite Smoked Bacon.
It is the best bacon, but it's only available for a few weeks each year.
Just restocked the freezer with another 30 pounds.
Winter is coming.

Hold on guys, I dont think this is going to be just a knife, I sense a Labor Day Ganzaa with lots of very special blades.
B

In case its a riddle.... Busse Combat Anniversary Natural Outlaw. That good bacon.

Those things can get you into trouble. Especially if you don't spell it right.

Ready here for a Ganzaa, baby.

JohnTheTexican said:
Speaking of bacon...
Every year at about this time, Hatch Bacon is available at the local H-E-B.

H‑E‑B Hatch Green Chile Hardwood Mesquite Smoked Bacon.
It is the best bacon, but it's only available for a few weeks each year.
Just restocked the freezer with another 30 pounds.
Winter is coming.
Click to expand...

Labor Day weekend is the start of the Hatch Chile Festival...I'm going to miss it this year because I'm fishing in Hawaii...BUT called in my order for 3 sacks of green chile roasted should get me through the year!!! Hatch is only 30 minute drive for me and worth it just for the Aroma of fresh roasted chile and a Cheese & Green Chile Quesidilla on home made tortilla

I don't think it's likely, but I would be down for a busse naginata
A Busse spear head, of any variety, has always sounded cool to me, and the recent post by Jerry regarding the Kris P. Bacon and other blades from off the beaten path has me inspired to believe it's not outside the realm of possibility.. I could see the Busse crew having fun designing a polearm. And then the community having an insane amount of fun with the product. I can imagine some people making sweet handles and sheaths for those.. The design I have in my mind is a blade profile similar to the FMv8, less pointy though to improve tip strength, convex ground, and with a slim, straight, longer handle, no scales, with a slight flare at the bottom of the handle and holes drilled periodically through the handle for lots of options when fastening it to a handle.
Perhaps just a pipe dream, but I'll patiently wait to see if it ever comes to fruition

Anyways, I'm really curious to see what this thread results in.
His statement saying "that is all" followed by a succession of emoticons made me suspicious.. what else can be spelled with the letters of bussecombatknives?
So, naturally, after perusing a list of the 1863 words that can be made using those letters, I wrote down a few that stood out:

I predict a Busse fork! Or spork!

Have always thought an INFI Boar Spear would be the stuff of legend... Bring it!

I’ve always wanted a boat spear too. Maybe I can eat the head made if/when the custom shop re-opens and get someone else to make the haft

Whatever it is I hope it’s a chopper

Wow! This thread was posted back in Aug.

Clues are coming as fast as shipping notices these days.

Boar = big bacon. When is the BG War Boar coming??? Or at least a hawksbill? Jerry, give us something in this blade shape! Been a long time since the Scrofa and the War Boar!