No sin in owning a user. And cleaning up one that has been neglected is a good thing. 1095hc is good steel with good heat treat and cryo quench. Keep it clean and sharp, don't abuse it and it can last several lifetimes.

It was an Old Timer Woodsman I bought in the early 80s and Schrade Golden Spike that I bought in the mid 80s, and the time I spent wadering the wilds alone with them, that are at the core of how I ended up having a centerfold sort of display of my own knife designs in the Schrade catalog. But just like the SCHF1 I bought and took out and tested almost 12 years ago , which also critical played a critical role in my Schrade designs happening, all of my designs are among the few Schrades that are manufactured in Taiwan in the same shops that p[roduce high quality knives for several US based knife companies. And from the results I've seen so far over the last ten years, of a much better quality than any of the Chinese Schrade stuff I've tested. It was a conversation with Morgan Taylor about several things, including the huge difference in quality and workmanship between the Taiwan and Chinese pieces, that led to my first Schrade design. The SCHF9 was the first Schrade knife made of 1095 steel and not made in China in several years at that point. Funnily enough, Morgan at first argued against my use of 1095 and the country of origin, saying we would make more money from it being made in the lower costing manufacturing plant in China from a different steel. Only to watch as the knife went viral on You Tube with people beating the snot out of it and it actually living up to the Extreme Survival moniker that Morgan had started that I actually design the SCHF9 Wilderness to live up to. Only to later try to copy that success story after the SCHF9 had done so well globally by having other models he had come up with made in China, and allegedly of 1095, but with first the failure rates of those models the steel quality is rather questionable, so who knows what it is. I still have an old Golden Spike I still carry more than a lot of people would likely imagine.

Schrade hasn't made a catalog since 2004. Taylor Brands and BTI have made catalogs that have the word "Schrade" in them.

I just made a post with the word "Schrade" in it but this post isn't made by Schrade either. Canal Street Cutlery is/was a worthy successor to the original Schrade only because they had so many former Schrade workers.

I usually avoid anything that has "gone viral". I was going to check out these "viral" rave knife reviews but I got side-tracked by even more important "viral" info so I watched ten hours of "must see" cats acting like cats. I think the cats in Taiwan are of much better quaity than Chinese cats.

I'm glad you have great memories using the fine Schrade USA products you bought in the '80s. That's kinda what we are about around here.

I'm glad you have personally found success as a knife designer but I will never buy one. These knives will always be imposters to me. It's just no fun collecting knives made by a nameless sub-contractor somewhere in China or Taiwan even if they are heavily marketed by their designers.
Last edited: Aug 13, 2019

Even when Imperial Schrade started to use China to make some of their knives, in 2004 - Their commitment to quality was still clearly shown, down to the "Schrade China" tang stamp.... Ken.
Last edited: Aug 16, 2019
E

My compliments to Codger_64 and others who contributed to this thread. Thank You!

Now, I have a question...
Has anyone determined when Schrade stopped serializing the Uncle Henry 153UH 'Golden Spike' fixed blade knife with a serial number stamped on the left guard front? I ask as my old Uncle Henry 153UH, with carbon steel blade, does not bear a serial number. So, I know it wasn't one of the earliest production 'Golden Spike' knives, and it was made prior to the mid-1995 transition to 440A stainless steel. However, with an idea of when serialization ended, I would have a closer approximation of when this knife was made.

EEResQ said:
My compliments to Codger_64 and others who contributed to this thread. Thank You!

Now, I have a question...
Has anyone determined when Schrade stopped serializing the Uncle Henry 153UH 'Golden Spike' fixed blade knife with a serial number stamped on the left guard front? I ask as my old Uncle Henry 153UH, with carbon steel blade, does not bear a serial number. So, I know it wasn't one of the earliest production 'Golden Spike' knives, and it was made prior to the mid-1995 transition to 440A stainless steel. However, with an idea of when serialization ended, I would have a closer approximation of when this knife was made.

Welcome EEResQ! I'm glad to see your interest in the pattern! It is a good one for many reasons. Someone needs to do updated in-depth research on the Golden Spike. I'm sure that much more information is out there to be found. What I posted here (way back) was all I found at the time with occasional updates as more info became available. And I've since homed in on another pattern for full research, the 152OT Sharpfinger. Post pictures of yours when you can. I use an off forum photohost which is free and easy, post the BB image link here in a post.
E

Thank you for the info Sir!
I stumbled into my vintage Schrade Uncle Henry 153UH 'Golden Spike' in a rather round-about way in the late 1990s. After finding an old handcrafted (and beat up) leather sheath at a second hand shop in rural Ohio for $2. Then, I carried it around to flea markets, yard sales, and other second hand shops in search of an old knife befitting its character. At a flea market in Kentucky, right at closing time, there it was sitting on a table without a sheath; this old Uncle Henry 153UH. The seller was packing up for the day and I offered $10, which he readily accepted. So, for the last twenty or more years, it's been the best $12 knife in my possession. That was until recently, when I spotted a seller on eBay with surplus Schrade 153UH leather sheaths; complete with the sharpening stone. I ordered two as I'm watching for a second vintage Uncle Henry 'Golden Spike.'

Now, let's see how my first effort at uploading images from an off forum photo hosting site goes... 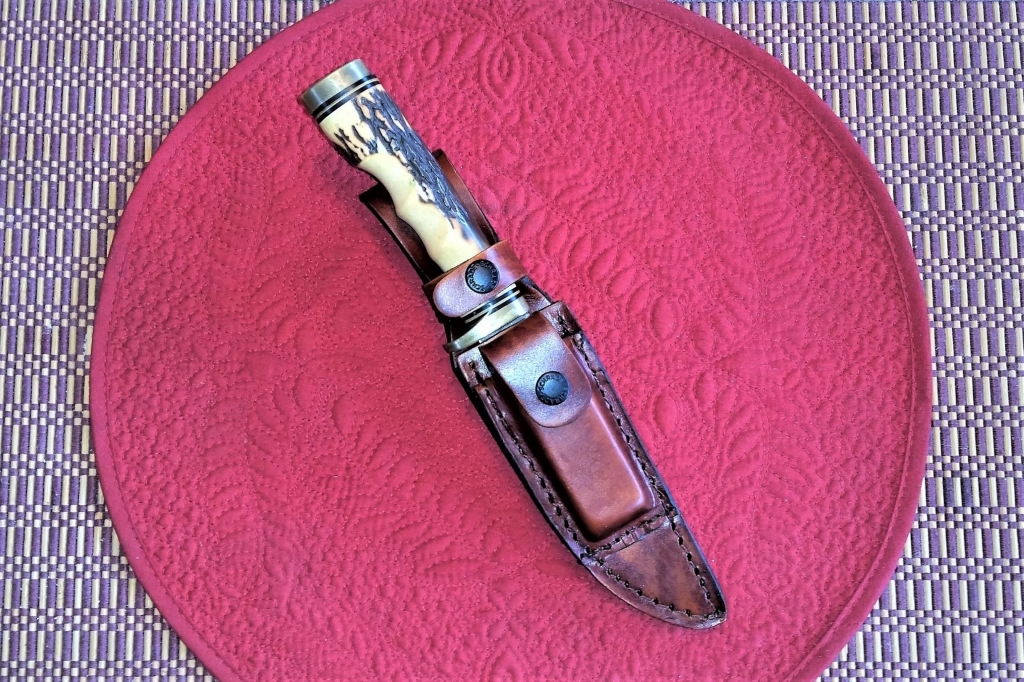 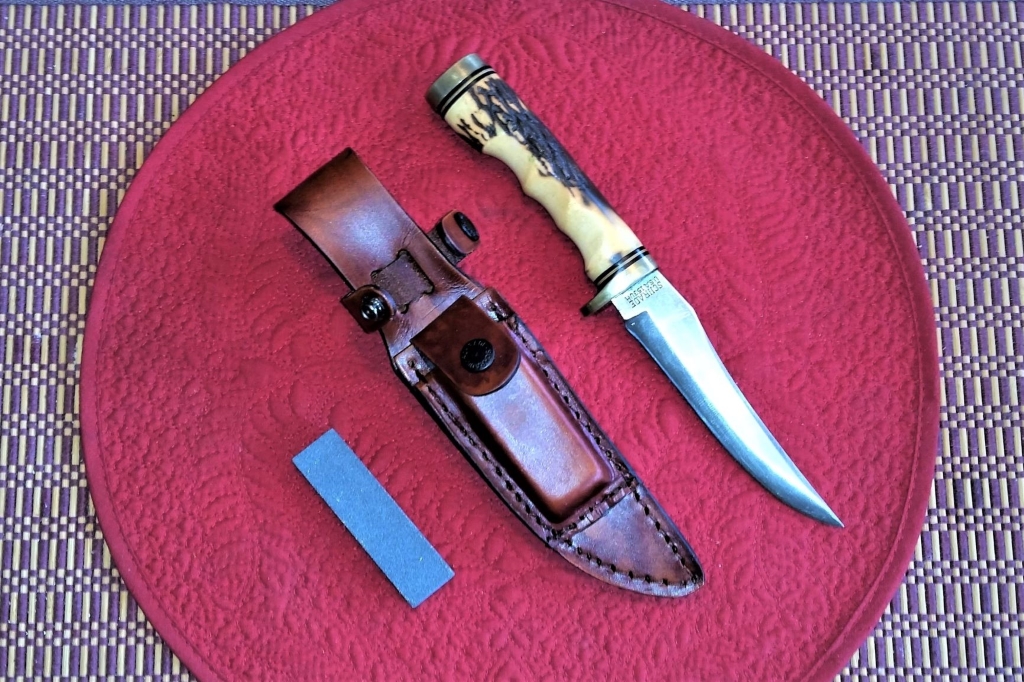 Great story E EEResQ ! Although I think I like your old original sheath better!

It was also the 153UH that initiated my schrade knife collection a while back. My dad had found the knife in an old car he was towing for scrap and gave it to me. I kept it in the glove box of my suzuki samurai until one day I was using it for something and left it on my bumper and forgot and drove down the road and lost it. I looked up and down the road for it but couldn't find it. I hated losing it and wanted to replace it but had no clue who the manufacturer of the knife was or anything - I had probably never even looked at the stamp. Then I remembered about the internet and I eventually found a picture of the knife and found out that it was a schrade 153UH - but in the process discovered all the other cool fixed blade schrade knives and was able to pick up most old timer and uncle henry models pretty quickly. At that time they were still very reasonable and I don't think I paid more than $20 for most of them - I should have finished up the collection back then though because the few models I have left are now going for way more than I'm willing to pay, so my collection will probably remain incomplete. oh well.
E

There's probably very few young men growing up in post WWII through Vietnam era America who hasn't lost something they left laying on the bumper or fender of their old car or pickup truck while working on it. Myself included! Those were the days! 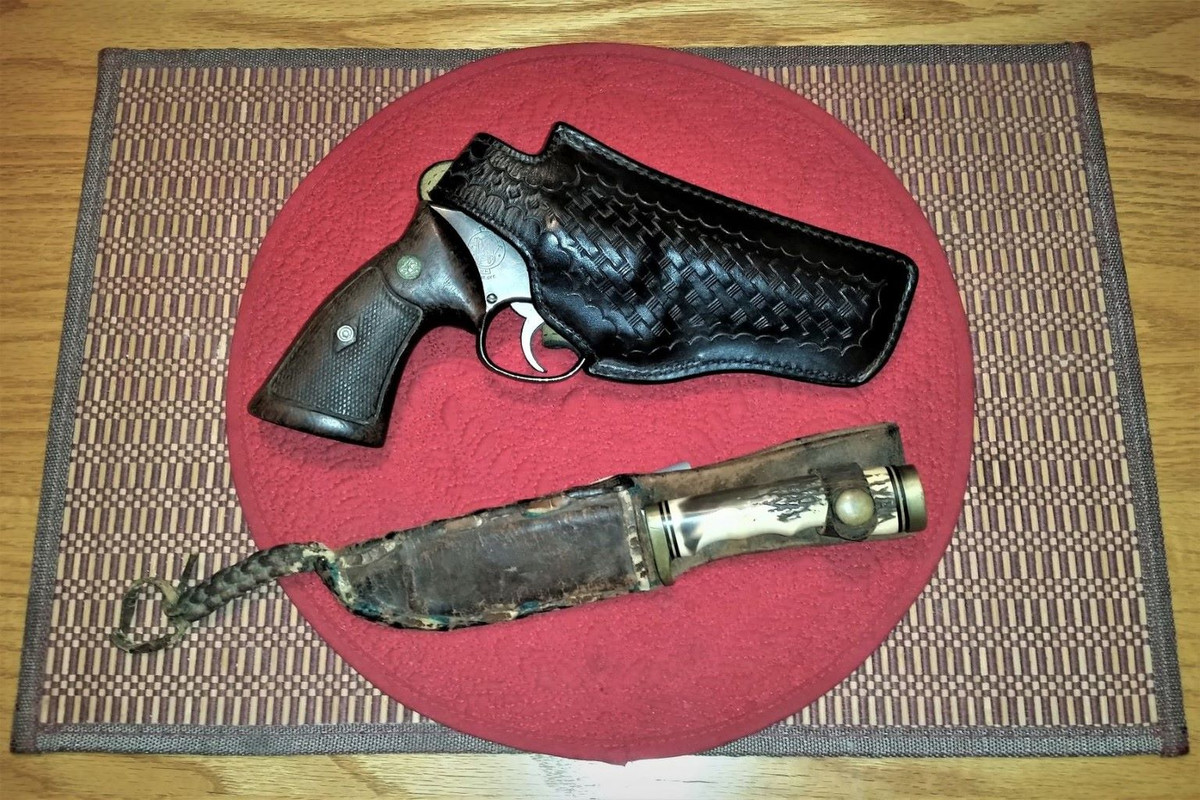