Info on the 49ers, however all my photos have been removed....Hoo Roo
L

Some info for Smiley who contacted me,....the predecessor Schrade Fixed blade knives,to the individual knives comprising the 49'er Series...unfortunately Blade Forums have removed all my photos to 'save space''''...most photos were unique and irreplaceable...if you search Thread 'What's your latest Schrade End 8/12 Post NUmber 1078..you will see Mint in original Schrade Walden blue box's 147's......that thread has also been closed for comments by Blade Forums however you can still view...many rare photos in that Thread.........thanks for your kind message Smiley....
Last edited: Jan 28, 2021

I have a complete collection of the four Staglon knives. They are all very well made, with good heavy sheaths as well. 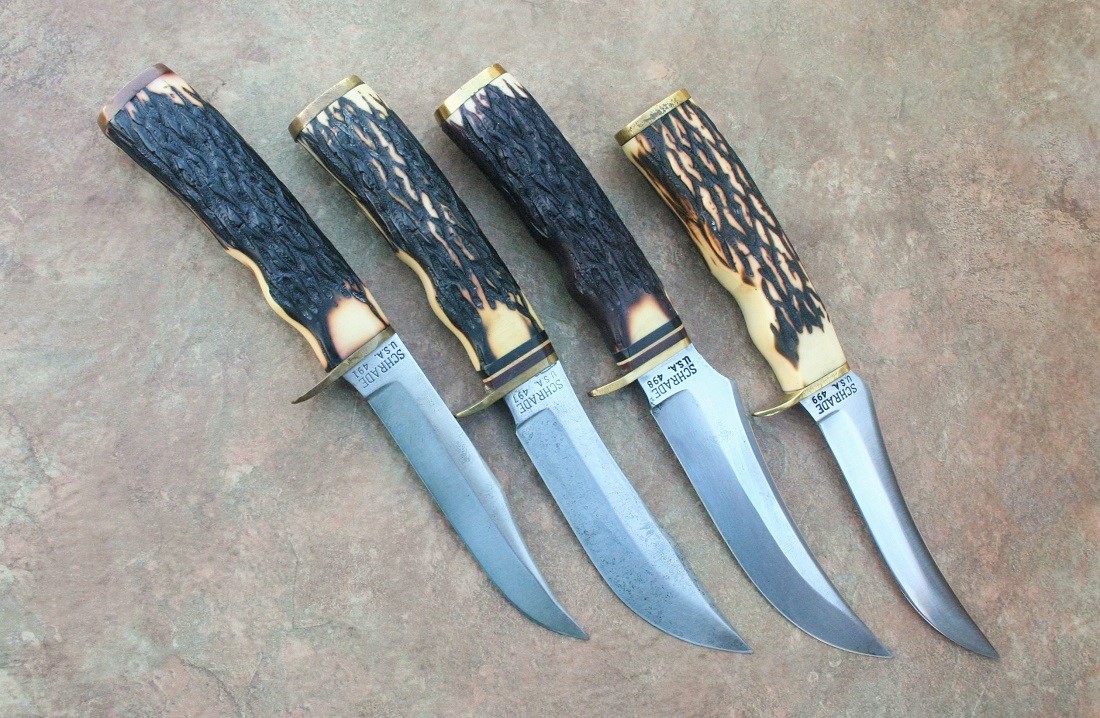 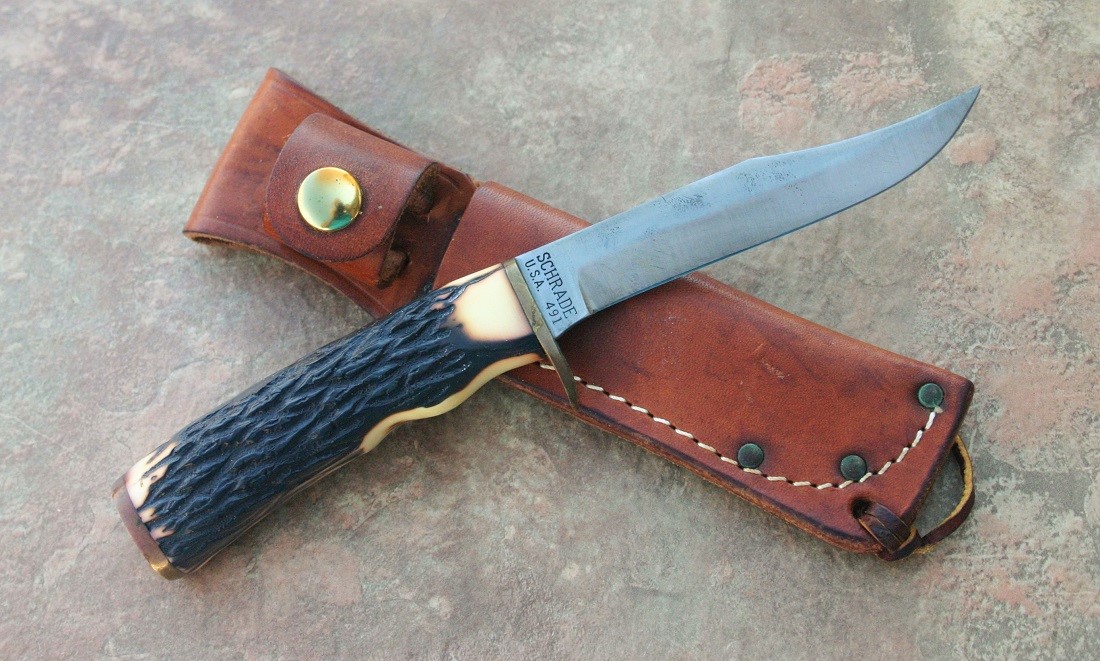 I have a set of the staglon knives as well - a couple of mine aren't in perfect shape, but they are all solid and have intact blades for the most part.

The interesting thing is that while all of the sheaths I have for them are clearly correct - only two of them have the 49ers stamp - I noticed your sheath doesn't have the stamp either. Actually, the single knife shown with sheath does have the 49ers stamp on the leather, it's just underneath the knife in the photo. Besides the 4 Staglon knives, I have a leather handled 497, and 3 of the 5 are stamped, while 2 are not. The 2 that are not stamped are the 497 and 498 shown above, which have the spacers between the guard and handle. I see that all four of yours have the spacers. The two outside knives in my photo do NOT have the spacers-- these were made in the first year of 1973, as shown in the catalogs. From 1974 on through the series they always had the spacers, whether Staglon or leather handled.
F

oh wow, that's weird. I didn't even notice that two of your 49ers didn't have the spacers.

as far as my sheaths go - I have no idea which sheaths came with which knives at this point - except for the 498 of course because that sheath is longer than the others.
L

Interesting thread...every genuine Schrade 49er Series.. had the spacers IMO..even the first 49er wall sets show them...I owned many of the 49erSeries including Mint examples....I would be interested to know if those without spacers have the Butt Cutlers Bench Made Mark, 'Anvil etc'..all of mine did....however there was a 'Craftsman' version I believe, with similar knife to a 49er and my memory a bit dim now however they may not have had the spacers..nor the butt Cutlers Marks.....nor the stamps on the leather sheaths...perhaps explore these possibilities...as all the 49er's in my other thread photos with their boxes, clearly had spacers..and all had the Cutlers marks etc...Hoo Roo

Larry, here is the catalog cut from 1973. It clearly shows the leather handled knives with spacers, and the Staglon knives without spacers.

The rest of the years (1974-1979) catalogs show spacers on all the knives. My 499 does have the cutler's marks on the butt, but the 491 does not. Both have the correct "hammered" butt plate with the domed Phillips head screws.
L

The Cutlers mark on the hammered butt, the Anvil represents the Individual Cutlers Mark and the other symbol next to it such as an acorn represents the Year of Manufacture....that should be able to narrow down when each knife was made...I believe the Craftsman model had the hammered butt & the Phillips Head Screw..however I thought they lacked the Cutlers Mark....plus I was thinking the Craftsman model also lacked the spacers..I'll do more research...they are nice unique knives the 49er Series designed to tell a story and the' predecessor' knives I mention in opening post..
F

I wonder if anyone knows what years correspond to which cutler's marks. also, here are the four sheaths, two with stamps, two without. and on the back of the sheaths, one of the sheaths with the 49ers stamp lacks the genuine leather stamp. and again, other than the 498 sheath, which is the longest one, I don't know which of the other sheaths belongs to which knife