I saved a copy of The Wall Street Journal from last Saturday that had a massive article on the new Joy. Even made the top right side of the cover!

Hopefully the photos turn out good enough for everyone to zoom in and read.

Oh and look what showed up today! Can't wait to go through the new edition!

azwelke said:
Congratulations Ethan!!!
Is there a link to the new edition?
Click to expand...

It's Floating on the Big River

The older copy was a wedding gift when I got married in 1997. But there's a story behind the second, newer copy.

It was 2006, and I was on a business trip in Buffalo, NY. Someone I had met through CandlePower Forums (a flashlight forum similar to Blade Forums) lived in Ithaca, NY, and he had gotten me into home coffee roasting in ~2002-2003 through our chats on CPF. We grew to become friends (he surprise gifted me my first "good" popcorn popper to roast coffee in for my birthday one year), so I went out to visit him one weekend while on this trip.

I stayed the night at his home on Saturday, and Sunday morning, he made some "Lemon Soufflé Pancakes" that absolutely blew me away!!! I knew my wife would love them, so I had to get the recipe from him, but forgot to ask for it while I was there visiting. Later, he told me he had gotten the recipe out of the "Joy of Cooking" cookbook. "Awesome!" I thought, I have that book! But try as I might, I couldn't find that darn pancake recipe in my copy...

Well, it turns out that the Lemon Soufflé pancake recipe is one of the NEW recipes in the newer 1997 edition that YOU helped write!

So, I bought another copy of the cookbook with that recipe.

We've had several children since then, and my family still LOVES those pancakes, so much so that we make them probably about once a month! We've changed the recipe slightly to better suit our taste, and to get it to work better here at ~5,600' altitude. Served with either a warm blueberry syrup or compote, they're pretty hard to beat!

I have a bunch of the old ones. I buy them whenever I see one. Now I need a new one.

Received one for my B-Day

I was visiting my folks in ME a couple weekends ago and saw a piece about it on the CBS Morning Show (?)...Pretty great to see, Ethan. It's nice that your son is into it and seems (from what I saw) ready and pumped to be the fourth generation standard bearer. Congratulations!

Congrats on the new edition! I came here to see if there was any chatter about it.

My copies are well-used and well-loved. The 1943 edition and 75th Anniversary edition get uses a lot. 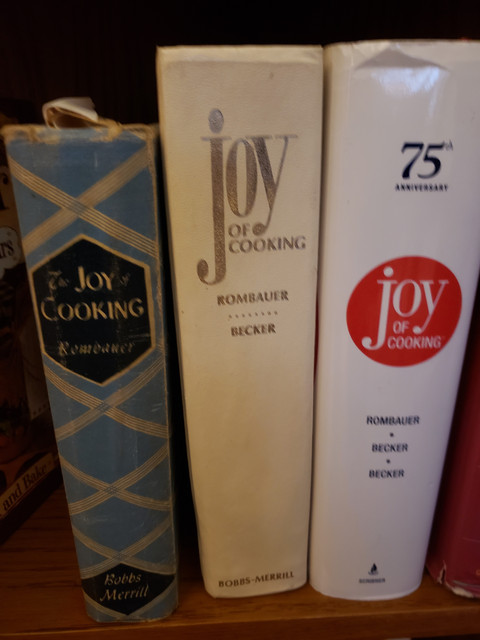 It makes me very happy that you all are enjoying the new JOY..... My son and daughter in law have done an incredible job. Granted I am a bit prejudiced but, trying hard to be objective they did a GREAT job....John and Megan have done an “update”that is a real and overdue complete revision.... John is a demon researcher and he and Megan are good “approachable” writers.... They both love the subject(s) the write about and they really went the extra mile on everything.... Poppa is very proud.....
You must log in or register to reply here.
Share:
Facebook Twitter Reddit Pinterest Tumblr WhatsApp Email Share Link
Top
Change Ad Consent Do not sell my data