Were there any American axes made of laminated/sandwiched steel?
B

Yes. I don't remember the specifics, but there have been a number that show the high carbon bit. There are custom makers that laminate a high carbon bit between softer sides. I think Kentucky laminates some of his Hawks.
C

Pindvin said:
Were there any American axes made of laminated/sandwiched steel?
Click to expand...

I have a couple Kelly Perfects from around 1916. If you look at their print ads from this time period through at least 1925, they advertize a "crucible tool steel bit" and a "soft steel body." I assume that this means sandwich welded bit. I haven't acid etched mine to take a look, though.
H 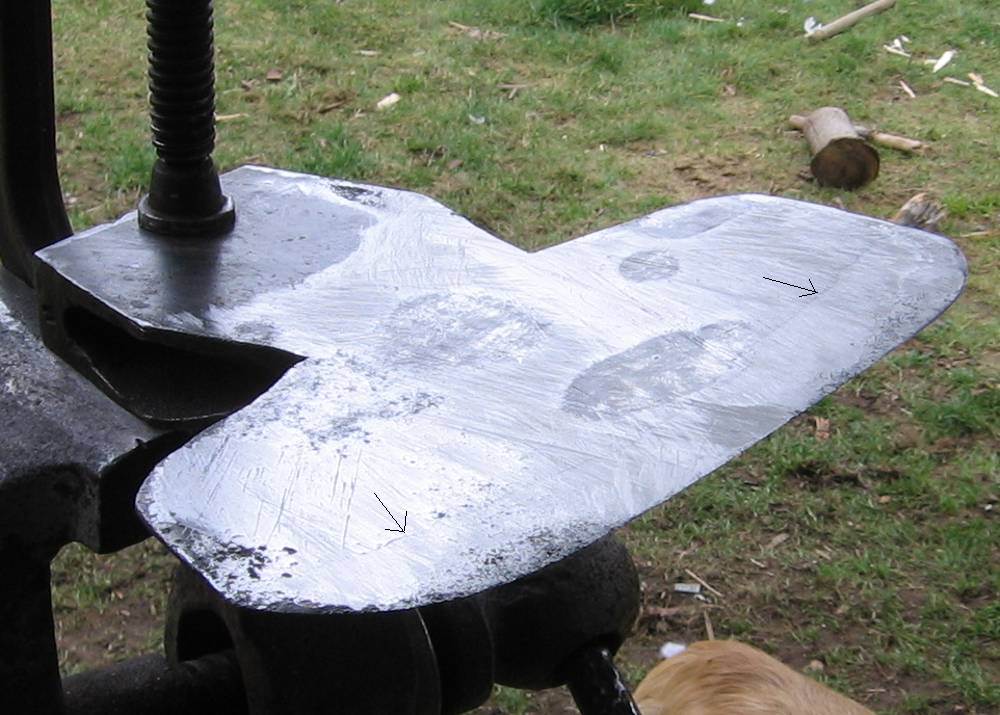 Please tell me peg that's a post vise with a c clamp in it holding your beautiful hewing ax.
S

That's a post vise with a big 'C' clamp holding my beautiful hewing axe. It's a quick way to clamp something in the horizontal position.
S

Square_peg said:
That's a post vise with a big 'C' clamp holding my beautiful hewing axe. It's a quick way to clamp something in the horizontal position.
Click to expand...

Is this a kelly broad axe? I only ask as some one is trying to sell me one that looks a lot like this one. It looks brand new though. I have looked online and am not finding any brand new with this profile. Thanks for your time Peg.
Rob
S

Sluicebox said:
Is this a kelly broad axe?
Click to expand...

That axe has no visible makers mark. I do have a Kelly Canadian pattern like this one out in the garage. The eye is wider on my Kelly. But I'm sure they made many styles.
A

I worked on a Kelly Registered that was laminated, and my Beatty cleaver is too. Pretty common practice pre-'50s, in my understanding.
J

I had and sold a Kelly double bit with that "overcoat" method on both sides. It was very clear following an etch. There are photos of it here somewhere if your a good searcher.
S

I picked up that bunch of axes today! The broad axe has been painted and all I can make out on it is Pacific and an H stamp. I have a feeling there would be more lettering underneath the paint. Blade is 13" wide and 8 1/2" from poll to bit. Great shape! I would love to post
Last edited: Feb 7, 2015

Sluicebox said:
I would love to post a pic of the bunch but can't figure it out any hints?
Click to expand...

Hi Sluicebox - here is a link to a rudimentary explanation as to how to upload and host pics on a third party resource for use in forums. The snapshots are for what you would see on a phone or tablet but are the same for PC. Hope this helps.

Got all that for a $120. I don't know anything about the broad axe stamped Pacific with an H on the poll. I don't know anything about the draw knife, should have bought the other three as well (kicking self.) I am guessing that is a double bit cruiser no marks unless they were wasted in the vice. Will try to clean that up and rehang it. Small lakeside broad hatchet. TT hand made doub, TT flint edge boys axe? New Collins came with set and will be my loaner outer lol. Anything you can tell me about these would be deeply appreciated. Thanks for looking. I was not at all trying to derail thread. New and trying to post one that at first looked like one in here. I am sorry if I have offended the Original Poster.
Last edited: Feb 7, 2015
S

I'm always a little leery of of folks who paint axes to look like they have a fresh bevel on them.
S

Thanks Peg, I want to strip that paint off. I think the broad axe may have been painted to hide a weld but don't know. Paint was still tacky when I got them. The guy bought a bunch as he was moving to AK and going to build a cabin, then decided to fly instead of drive. Got a nice generator from him for 50 and he threw in two new propane tanks one was full! Gonna meet up with him again and get a nice camp stove this weekend and probably the other draw knives. Doubt he want's to carry on plane. Said he was going to repurchase everything in AK once he got there. I am moving the pics somewhere else in here, don't know where yet but it didn't relate to the original post.
You must log in or register to reply here.
Share:
Facebook Twitter Reddit Pinterest Tumblr WhatsApp Email Share Link
Top
Change Ad Consent Do not sell my data