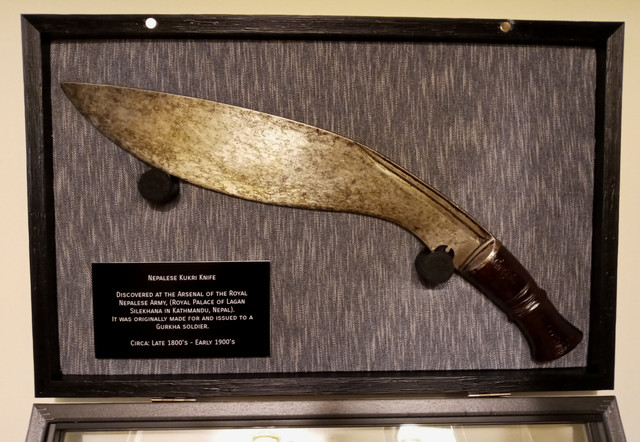 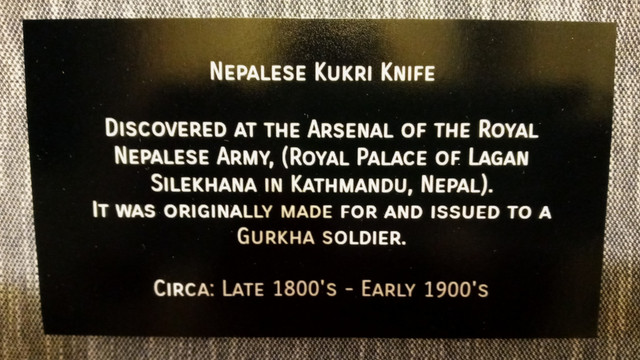 I was up pretty early this morning, (way too early). So, I randomly picked out a few pieces in my collection for their routine wipe-downs, (using a soft cloth lightly saturated with a preservative oil).

This was one of those items, an antique Nepalese Kukri knife likely dating back to somewhere in the 115 to 130 year old range.
About 20 years ago, a stash of them, (amongst a plethora of other military implements), were found stored away in an old dilapidated Military Armory in Nepal.
This was after the Armory's contents had been purchased by a well established military antique business. Up until that purchase, the Armory's contents had sat in storage for many, many decades in the uninhabited structure. No care to the building or it's contents had been done for all those years, so it had effectively become a "time capsule". It all just sat there fully abandoned by the Nepalese Government. What was all truly in this structure had long been forgotten. It was nothing of importance to the Nepalese government or it's military, since the contents were considered obsolete.
But, to the Antique Dealer, this was the treasure trove find of a lifetime.
Although many in Nepal later criticized their Government for selling off what should have been considered historic artifacts of it's nation, the sale of the Armory's contents may have been the only thing to save that history. You see, the already dilapidated centuries old Armory, which had started off as a Royal Palace before later being repurposed as a storage Armory, came crumbling down during Nepal's awful earthquake some years ago. Without it's contents being sold off some years earlier, it would have been very likely that those historical items within that building would have all been lost as well. Although the sale of the items had caused them to be taken out of Nepal to be sold to collectors all over the world, at least they remained intact and will continue to survive for future generations to admire and appreciate.
In effect, the selling off of those items actually saved that Nepalese history.
In other words, this isn't a reproduction of an original Nepalese Gurkha Soldier implement... It's the genuine article!
I always like to add my "acquisitions" into my decor, so this little display case became the home for this particular piece, (glass front door opened here to avoid glare in this photo).
I find it neat to own such things. Hey, everyone should have some kind of hobby, and my collecting of "interesting objects" is just my choice of poison
Last edited: Apr 4, 2021

I definitely understand the viewpoint that Nepal sold some of it's heritage in this antiques deal- however the sheer quantity and similarity of these bhojpure blades meant that they wouldn't have significant value in a museum or some similar. I think it's something very special that these blades are still available to purchase to this day. Not often in the world of antiques are there blades of this age and confirmed heritage so readily available.
Take care,
Andrew
You must log in or register to reply here.
Share:
Facebook Twitter Reddit Pinterest Tumblr WhatsApp Email Share Link
Top
Change Ad Consent Do not sell my data