What is your budget? $20-$30 should suffice. I would suggest an older True Temper, Plumb, Collins etc.
There are some good users you can find on auction sites. Folks are usually more interested in a stamp or one in perfect shape so you should be able to find a user pretty easily. If you browse through the thread "what did you rehang today" you should get some good ideas of what to look for. Good luck!
I

Page 9 of this post theirs a Keesteel washboard axe (red groves) does any one know who has it... I sold that axe 3 years a go and would love to get it back
J

This is a cool thread...(somehow in spite of it being pinned it's the first i see it......)
Lots of valuable info...albeit any organisation is lacking,so would be very difficult to reference any of materials here,alas...

Divorced from my forge i'm desperately seeking solace in axe theory...(never a particularly satisfying deal,but marginally better than nuffink...)
And have come across the following research in archaeology of axes,and decided to deposit it here,for s**s&giggles...

Here's the paper itself,and lower down i'll talk briefly about what it is and whence et c.It's reasonably fresh,as these things go,early 2000-teens it seems.

This paper is about an archaeological inquiry into axes made and used by Mari people(a rather disappointing overview:https://en.wikipedia.org/wiki/Mari_people).
They are a Finno-Ugric group of folks that (probably)originated in Western Siberia,but at some point early in first millenium A.D. have crossed the Ural mountain range over to the European side of it(poor suckers...ended up square in Mordor..)...Afterwards,they seemed to've spread further North and Northeast,becoming ass'd tribes along the Northern coast of Mordor and Westward,such as Karelia and Finland(also a smaller group seemed to have headed to Hungary).

There they settled,and live there to this day;they Did try to get rid of "russians"(for lack of better term;as in whatever ruffianly tribes were filed under that ambiguous adjective during those centuries),but alas unsuccessfully,their three known major attempts failed(one by a Very narrow margin).

What's germane here,however,is that they have brought with them(from Siberia or wheresover) sufficient ad skills.Enough to make iron via reduction process,as well as to know the ABC's of Iron-Carbon reaction,an ability to produce either and most probably the HT of carbon steel as well.
All of those skills allowed them to make axes of many shapes and sizes,some startlingly "modern"-looking(the correction must be made for the incurable Half-Assness of USSR/RF science...some artefacts could be from elsewhere...Anywhere...(and it's not the fault of scientists themselves for the most part but the Mordor-state running the biz).

An interesting rabbit-trail may be that the so-called "ost-vikings",those that went North and East and then South overland to Caspian and Black seas have done this by taking the very rivers that were inhabited then by assorted Mari tribes.
So if there was an exchange of ideas on tool-making between those folks and what may've been the result is still a very much open question.

Looking at this double bit cruiser axe but cannot find any info about the makers Mark. Any thoughts? 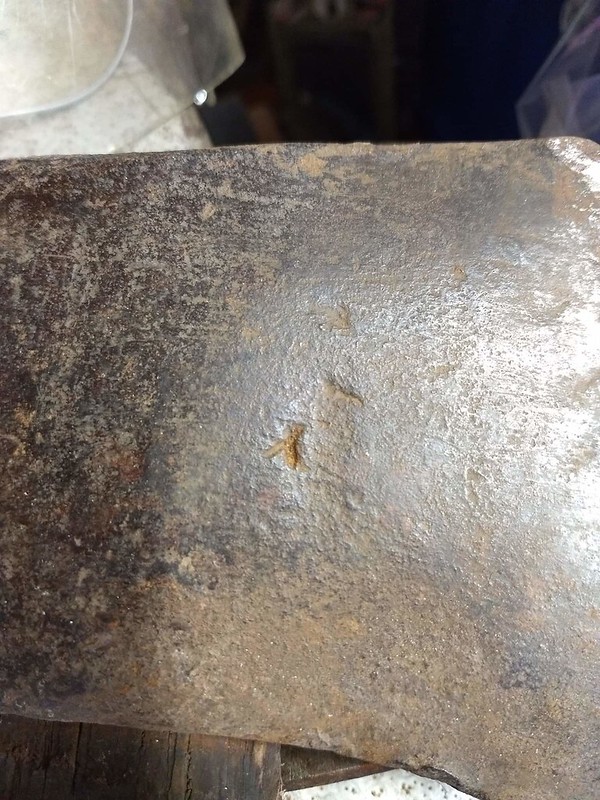 This probably isn’t a very relevant question but I happened to see a kelly registered axe with the words “pink panther” stamped in the back. It was a jersey pattern and still had some pink paint on the axe... is this someone making a forgery or was this an actual axe? Any info would be great! Thanks!
R

This came as part of a job lot.
3.3/3.4lb scotch pattern . Sorby is all I can make out.
Can't find much on it. Plan as a project was to grind the rolls, weld the cracks, finish and use it. Is rare/any value? Only found 1 pic online that looked similar listed as a 053. If it is 100yrs old+ it might dersrve better than what i have planned for it

Ryan Glen said:
This came as part of a job lot.
3.3/3.4lb scotch pattern . Sorby is all I can make out.
Can't find much on it. Plan as a project was to grind the rolls, weld the cracks, finish and use it. Is rare/any value? Only found 1 pic online that looked similar listed as a 053. If it is 100yrs old+ it might dersrve better than what i have planned for it 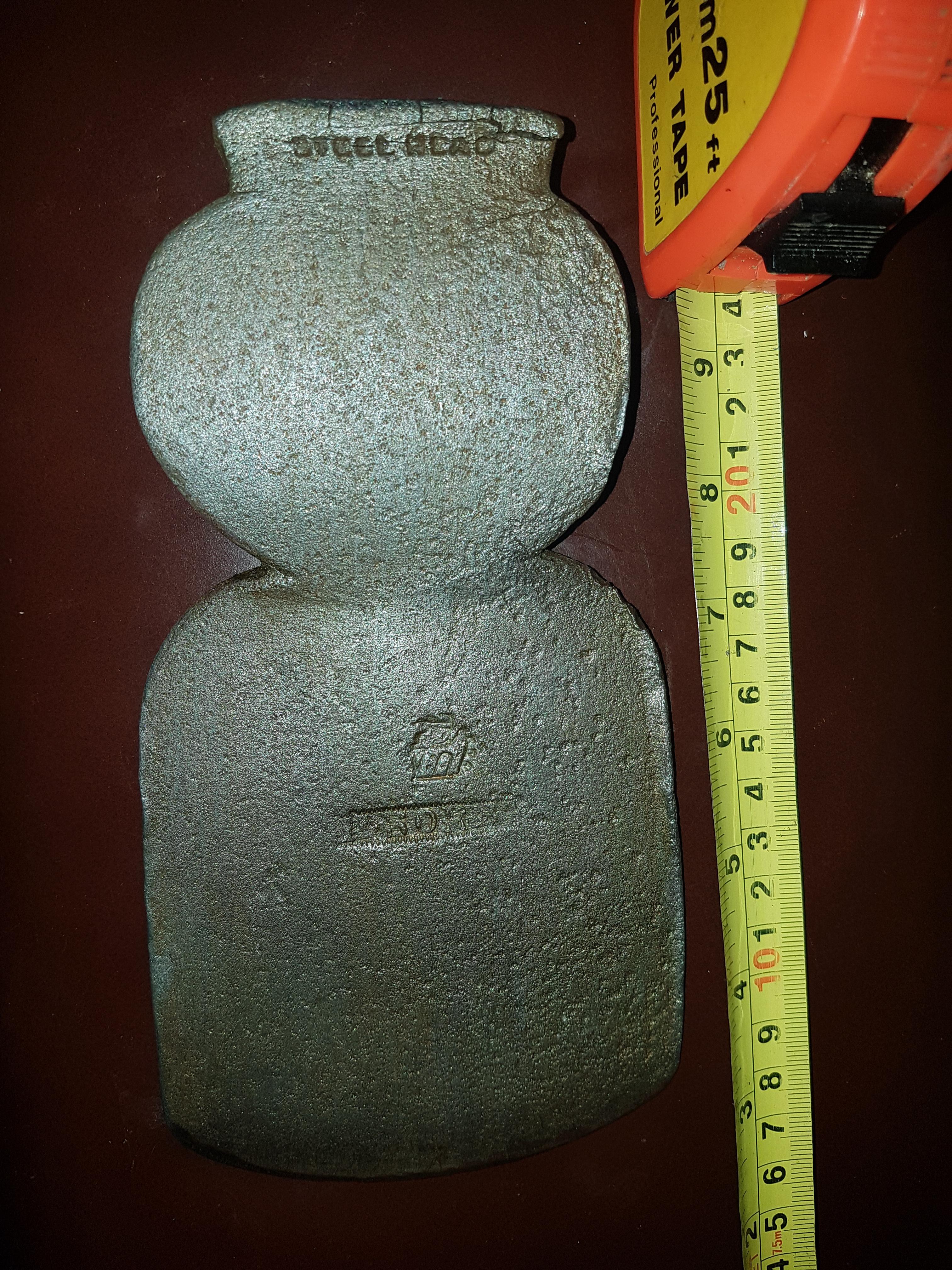 I was wrong about I&H Sorby. Your axe maker's mark looks more like
Turner, Naylor & CO's I Sorby
Mr Punch

Fantastic information. Thank you. I might have to retire this axe. Cutting and welding the hairline cracks seems the wrong thing to do. Might just leave it as is
Last edited: Apr 28, 2020
R

After closer inspection in daylight it looks as if whoever stamped the axe had two attempts. The I.Sorby part has two I's the first followed by the jagged border edge, there are some traces of the letter overlayas ghost prints in the steel. The first "I" also sits higher.
After doing a bit of digging I came across this thread https://www.ukworkshop.co.uk/forums/mr-punch-first-appearance-i-sorby-t82871.html
I'm still struggling to date and value this axe as the punch trademark was registered in 1859. Examples on tools appear from 1876 from what I've read and continue till mid century.
The small cracks and the stamp fudge may detract from value?
If the head doesn't have much value/rarity I find myself tempted again to have it repaired and use it as the cutting edge hasn't seen much action.
The I.Sorby scotch axe pattern doesn't seem to be that common or mabey there just isn't a lot online? I'm on the fence again!
I

This is my first time on the forum. Im looking for a new offset handle for my grandfathers broad axe. I'm in Ontario. Thanks
A

devilpig said:
Oh, I guess I should mention that any axes I have get used. If I find a usable axe head it WILL be re-handled and used. This might lend well to some good reviews/comparisons in the future, so be looking for that as well.
Click to expand...

Dusty One said:
Great list.. A couple I have info on are
Marshall Wells was in Duluth Minnesota and
B____B____B. was Binghams Best Brand
Thanks for taking the time !
Click to expand...

Shown above are workers from the Kelley-How-Thompson Co. at Duluth’s Winter Frolic, circa 1926-1928. The tool and hardware wholesale business was headquartered at 231-237 S. Fifth Ave. W. — which would put it roughly where I-35 intersects the avenue between the DECC and Duluth Depot today. It...

Stumbled on this nifty article trying to find out where the Hickory” double bit axe head I got came from. Great picture of the stamp. Talks about Kelly-How-Thomson and getting purchased by Marshall-Wells. If this isn’t the appropriate place to post mods please let me know
G

found an old axe in my gramps shed. stamp says B&T co with a 7 in a circle. also a word above i cant make out starts with an m (monogram maybe). any insights? i'll post a pic soon as i figure out how.

gorebreg said:
found an old axe in my gramps shed. stamp says B&T co with a 7 in a circle. also a word above i cant make out starts with an m (monogram maybe). any insights? i'll post a pic soon as i figure out how.
Click to expand...

Awesome... live in ct so makes sense. Thanks so much!

Found this axe at my grandpa's have looked it up everywhere but can't find much. It's 4lbs. Us made with almost a spade looking stamp. It had navy blue paint on it when I got it. Any info would be greatly appreciated.
B