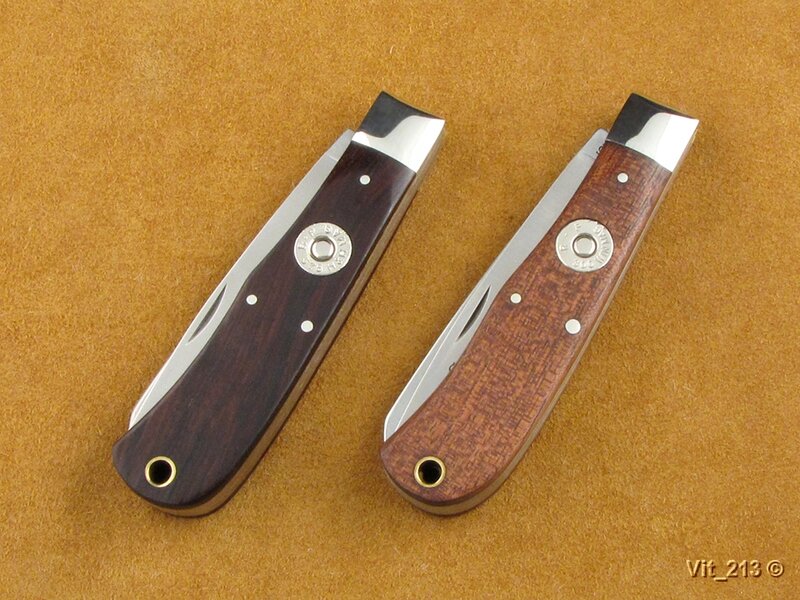 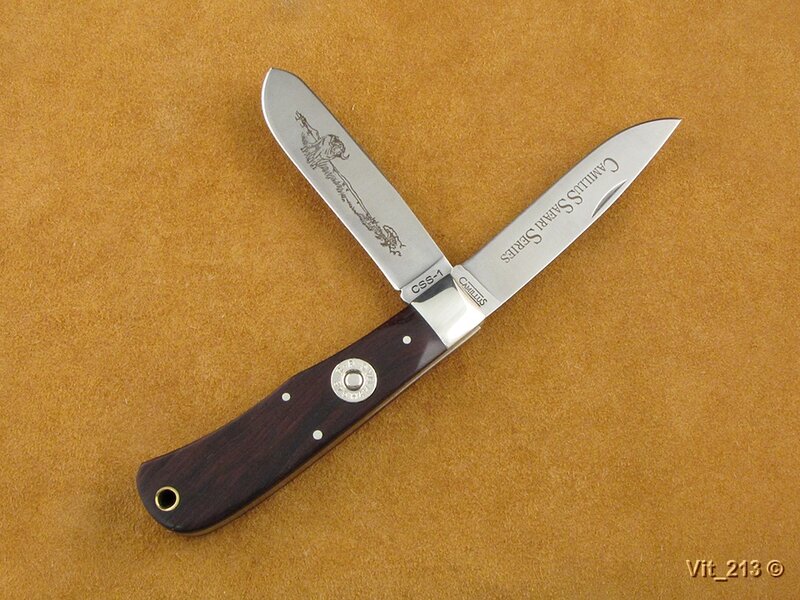 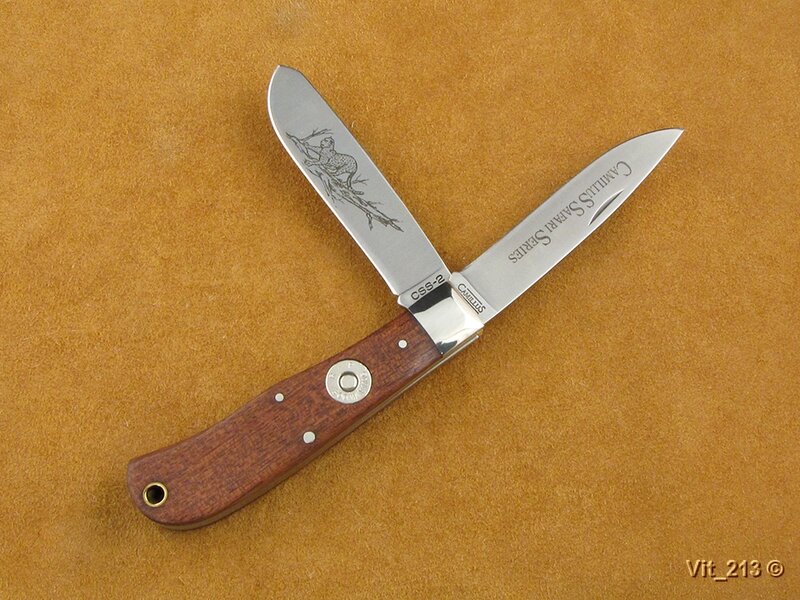 I'm still just a beginner Camillus collector, and now I have only #CCC3 knife. 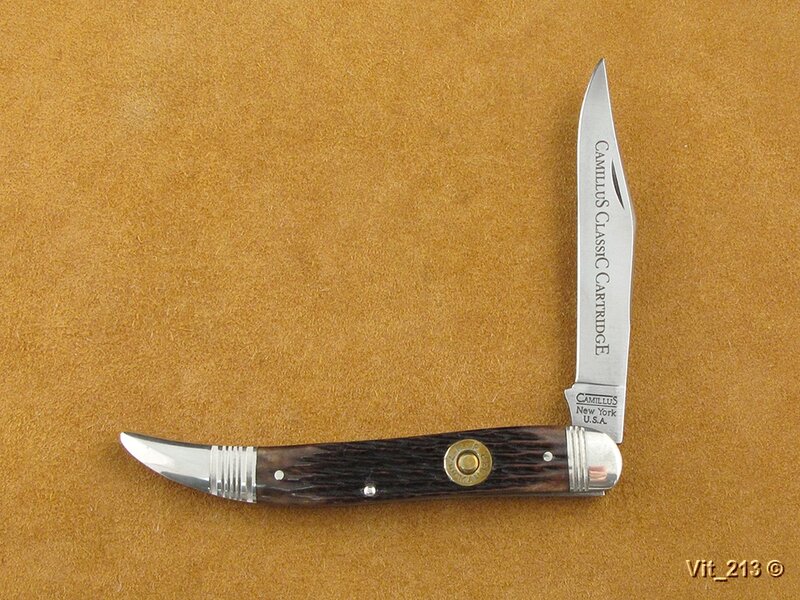 But I hope to collect the same collection of CCC series .
V

Thank you, Phil!
What other knives were made on this pattern? Wild Life #10? Yello-Jaket #719Y? 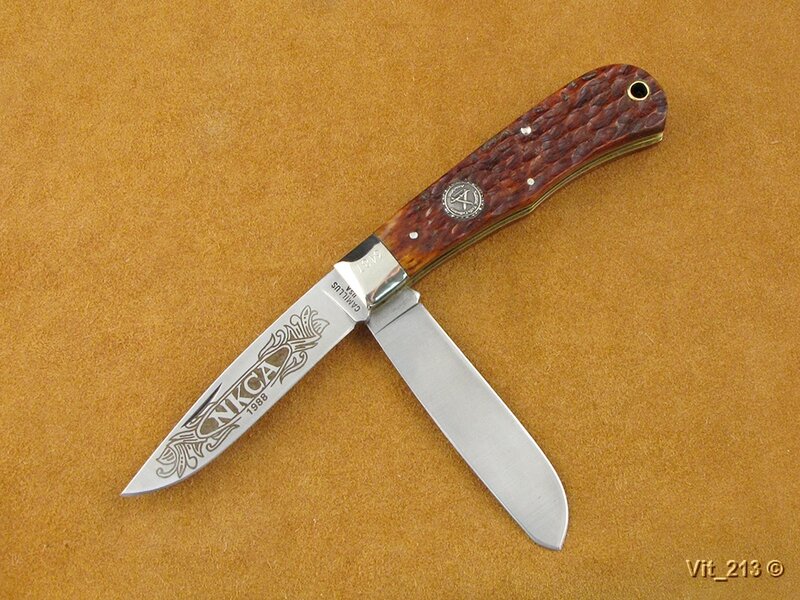 Great collection of knives, vit_213. Any knife you put is "worthy". I think you do a great job on the pictures of the detail of knives. Keep up the good work!

edbeau said:
Great collection of knives, vit_213. Any knife you put is "worthy". I think you do a great job on the pictures of the detail of knives. Keep up the good work!
Click to expand...

Phil, I'm afraid my knowledge of the English language is not enough, but I hope that you will understand me.
I noticed that the models #CCC-1 and NKCA 1988 have a rivet (fastening scales, liners and springs) are shifted closer to the lanyard hole. A model #719Y, #10 and #CSS have a this rivet in center of handle. What is the reason to the change in this pattern?
Last edited: Oct 16, 2012

Vit_213 said:
Phil, I'm afraid my knowledge of the English language is not enough, but I hope that you will understand me.
I noticed that the models #CCC-1 and NKCA 1988 have a rivet (fastening scales, liners and springs) are shifted closer to the lanyard hole. A model #719Y, #10 and #CSS have a this rivet in center of handle. What is the reason to the change in this pattern?
Click to expand...

The central pin location (#719Y, #10 and #CSS) is the "correct" assembly method for this knife.
The knives with the mid pin more toward the rear are knives with bonded on handles. The mid pin you see is a fake rivet that only goes through the handle material, the real mid pin is under the handle (the handle rivets are also "fake"; the only fastener passing through the whole knife in the handle is the lanyard tube!). This was done to prevent/reduce cracking of the handles when riveting the mid pin.

Interestingly if you look at the Remington R1128 Cocobolo handled bullet knives, you will find both types of knives as the change occurred during that manufacturing run.

Personally I am not a fan of the fake rivets & glue construction, careful riveting would have been the prudent solution.
V

Thank you, Phil!
So the NKCA 1988 knife has an "incorrect" assembly method for this pattern
C

I remember when we submitted a sample knife to the NKCA hoping to get the contract for the annual club knife. I knew one of the NKCA board members and we got some helpful suggestion as to what type of knife the organization would like. Jim Furgal, who was the predident of Camillus, and myself thought the large trapper pattern would appeal to the NKCA. I believe Phil Gibbs made three samples of this knife and one of the samples was submitted to the NKCA board of directors. Camillus was awarded the contract and I believe that 6,000+ knives were ultimitaley produced. I will look through my records to see if I have any additional information on this knife.

Thank you, Tom!
Phil modestly silent, that this pattern is also designed his own .
According to information from the official NKCA site, Camillus produced &#8203;&#8203;6500 these knives.

The 5754 pattern was designed before my arrival at Camillus in 1979.

I'm pretty sure this big utility knife (I think 4 13/16" closed) was also done in that 1990's bullet series. Seems like it had a CCC7 stamp on the back of the big clip blade. It is an old Remington pattern. It was so big it needed a belt sheath. I sold it off a while back. The USA Utility knife is a standard 3 5/8" equal end frame.
C

Phil,
I think that one of the first times that we made the large two blade trapper pattern was either the #10 American Wildlife knife or the Buford Pusser knife or Camillus made a Remington reproduction. I think the Remington reproduction was for a company called Weapons Specialty Co. (I am not sure of the name and I will have to look it up) but I think Blackie Collins was involved and he obtained permission from Remington to have the knife made. Many years ago I believe that you and I had a conversation about this knife. I do not know which knife was made first, but they were all made sometime around the mid 1970's. I will do some research and come up with some dates as to which knife was the first one made.
Tom Williams
C

Camillus made the #5754 large trapper pattern for the first time in January of 1972. This was a Remington reproduction bullet knife. This knife had a Delrin handle and clip and long spey blades with a scotchbrite finish. I have not been able to locate the S-Card for this knife, but it is listed in the log book and is dated 1/24/72. The next listing for this pattern is for the Camillus "American Wildlife" model #10 knife that is dated 6/25/75. The "Buford Pusser" knife was also made about this same time. It used the same Delrin handles as the model #10 knife but with a pewter "Buford Pusser" shield. The first "Buford Pusser" knives would have been after the model #10 was introduced. I remember the model #10 "American Wildlife" knife and the "Buford Pusser" knife because they were being made when I started working at Camillus. I believe that 5,000 "Buford Pusser" knives were ordered by Mr. Fred Robertson of Finger, Tn, who had a royalty arrangement with the Pusser family for use of their name. The Pusser family received a payment for each knife made. The knives were delivered in small quantities as Mr. Robertson requested them. I think we made 50 or 100 at a time. Each knife had a serial number engraved on the bolster. Although 5,000 knives were ordered only about 3,500 were actually made. You may find a knife with a serial number higher than 3,500, because some of the higher numbered knives were made first. A second "Buford Pusser" knife was made exclusively for Smoky Mountain Knife Works about 2003. This knife was also a #5754 pattern that used a reddish/yellow Delrin handle with a "Buford Pusser" shield. This second edition did not have a serial number engraved on each knife.
The first #5754 Remington reproduction bullet knife that was made in 1972 may be shown in Mel Brewster's book on Remington knives. Does any one have a copy?
Tom Williams
You must log in or register to reply here.
Share:
Facebook Twitter Reddit Pinterest Tumblr WhatsApp Email Share Link
Top
Change Ad Consent Do not sell my data