Did/Do you carry in the military? Story time... ;)

Just curious what any serviceman/women EDCed? If you have a story, please share it, pics too! Any edged tool qualifies, the smallest SAK to the biggest custom Busse!

I myself was never in the service. I do have the utmost respect and gratitude towards anyone that served and still serves. Many of my friends and family are and were, mostly Navy and Marines.

I enlisted in the army just after high school, and served in the Combat Engineers. My dad has gifted me a Camillus Boy scout knife when I was 12, and had joined a local Boy Scout troop. I had carried that knife until I enlisted, and left it home because I had been informed that things sometimes disappeared in barracks and the knife had developed some sentimental value to me.

When I arrived at Engineer school at Fr. Leonard Wood, Missouri after boot camp, we were issued a few things right off. Steel toe safety boots, and a Camillus model 1760. This was an all steel scout knife, often called the demo knife. This a bomb proof version of the Boy Scout knife and I carried that knife for about half of my 10 years I was in the army. It was only replaced by a Victorinox pioneer when I was serving a tour in Germany, and I was lured into a knife shop by a giant moving Swiss Army knife in the window. That was the start of my love of SAK's.

I carried a Buck 301 stockman for a while, but the SAK was my main knife. It did everything I needed from a pocket knife, and then some. I had been used to having a few tools on my knife from my boy scout days, and that never faded. Even with a tour in Vietnam with the 39th Combat Engineers, I didn't really need more life than that. Our squad tool box held two hatchets and two Ontario machetes, so if more blade was needed, we just used a machete. There was also a pointy thing that went on our M16's, called a bayonet. But the 'demo' knife was enough for most things.

When a construction accident smashed up my right foot and ankle, and they gave me a medical discharge and a cane, my Victorinox pioneer was in my pocket when I limped out of Walter Reed Army Hospital in Washington D.C.. The Camillus demo knife was in my duffle bag. My youngest son has it today.

Over the next 50 years, not much changed. I still carry a SAK of some sort most the time, and its enough. Being knife nut means a lot of knives have come and gone. Mostly gone, when I figured our that I didn't really need them.

I enlisted in the Marines in 1970 and was a 0311 (Rifleman) and 0341 (81mm Mortarman).
Most of the time I humped about 60 lbs. of gear so all I carried was a SAK Pioneer, to open C-ration cans and cutting small items.
Only NCO's and above were allowed to carry the USMC fighting/utility 7" knife (made by Camillus at the time, not Ka-Bar).
I used the edge of my E-tool (entrenching tool) whenever I needed to do any chopping or heavy prying.
J

Swampdog said:
I used the edge of my E-tool (entrenching tool) whenever I needed to do any chopping or heavy prying.
Click to expand...

Most people would totally under estimate how handy and versatile a tool/weapon an e-tool is. One of the greatest pieces of gear ever invented.
F

I carried a Camillus manufactured "Kabar" from the late seventies until my last tour in Iraq in 2003 when I splurged and bought an actual Kabar made by Kabar. I also carried first generation versions of the Leatherman tool and Gerber multitool off and on. I got more use out of the Leatherman and Gerber, but as a Marine I always had the Kabar on my pistol belt.

Army back in the early 80's. We were issued bayonets with our gear so we had them when in the field. In Germany every little store had bowls of knives near the counter. I bought several autos and carried them. My favorite that is still with me is an Anton Wingen jr. "Othello" Italian style. It has a carbon steel blade instead of the soft stainless so common and it actually takes decent edges. I carried that all through Europe even on vacation in Austria, Switzerland, Italy, etc. I also had a small carbon steel Barlow. Colonial I think.

Out in the field we had to have the bayonet and a 45 1911 plus mag carriers for both, first aid pouch and canteen. There wasn't any more room around my waist. I tried carrying a regular fixed blade once and my platoon Lt. and plt Sgt wanted to borrow it. I looked over and saw them starting to try batonning through a padlock shackle and I took it back after cussing them and kept all my personal stuff away from them after that. I couldn't believe how stupid they were. I don't remember how they got that gate open all these years later but I tried harder to keep young Lt's better supervised until they grew up a little.

When I enlisted in the Marine Corps in 1987 I had been carrying an Old Timer 34OT, for about 3-4 years as a young kid working on farms. Once I got done with boot camp, that’s the knife I carried...until I lost it one day!! I was a bummed out, because I really liked that knife. I went to the PX and bought a Victorinox small Tinker. I used some 550 cord and fastened it to my belt loop on my utilities so it wouldn’t get lost. I carried that knife through the rest of my time in the Corps and almost exclusively up until a few years ago. It was responsible for feeding many Marines in the field. Not by harvesting anything to eat, but opening the MRE pouches I never quite understood how someone could get through the military, especially in the field, without some type of knife.
I also had a Kabar I would carry in the field. Mostly because what Marine wouldn’t want to have a Kabar with him??

I still have the Kabar and small Tinker, the 34OT pictured here was a replacement my Grandad gave me about 23 years ago. 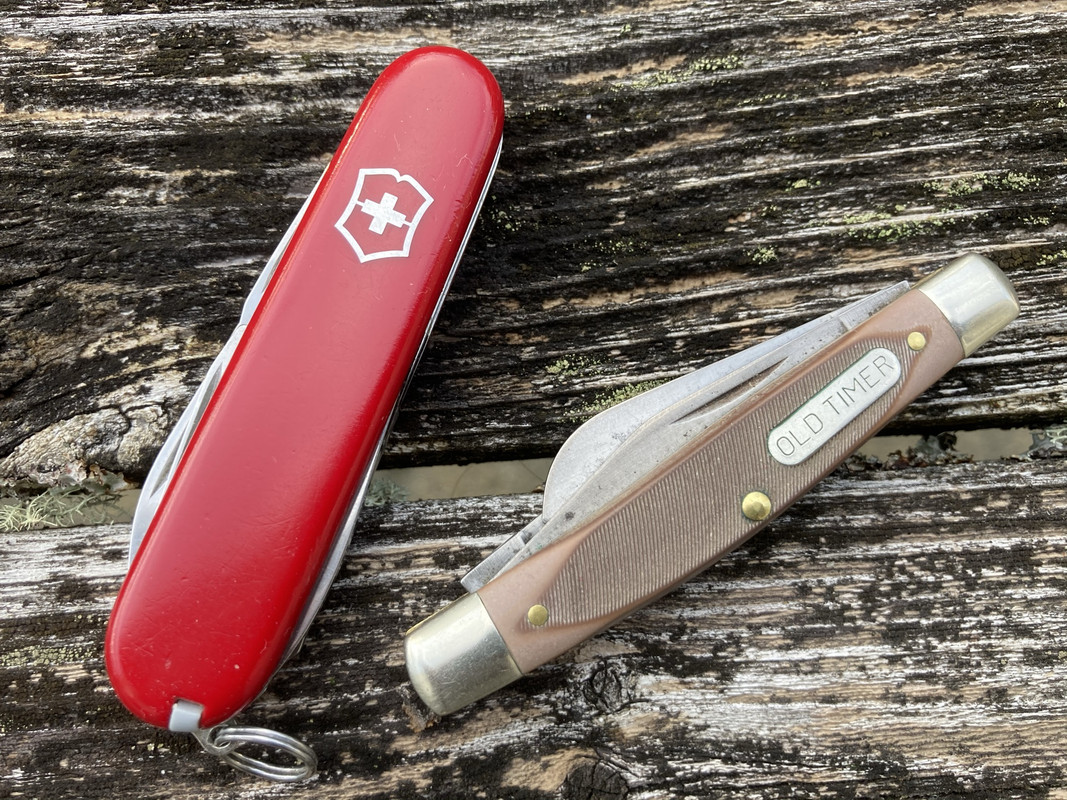 I had many different carry knives when I was in. There was the issue M9 bayonet for sure. Heavy beast that they made us tie down to prevent use and loss. Got in trouble for sharpening mine and a few others. I also carried a Western boot knife. It clipped on my LBE right behind an ammo pouch. Then there was a Gerber Parabellum which had a large black pouch and lived on my LBE. In my pocket I’d carry a Spyderco Hunter, Gerber Magnum LST, or a Benchmade Balisong. Once I discovered the Leatherman tools, I had one with me whenever I had pants on I always found it ridiculous that even though I was in the Infantry, command hated and banned edged weapons. Oh they taught us to believe “ Kill! Kill! Kill! With ice cold steel!!!!!!” But we’d catch a lot of flack for actually showing up with knives in view! That’s why my stuff stayed hidden/disguised Here are the Western and my Leatherman

Wasn't in the service myself, but my brother is a proud Marine. He carried a Kabar (of course...) and was kind of angry that it got lost when he was discharged. I don't know if it was an actual Kabar, but knowing that Ontario has been supplying the fighting/utility knife for a while it was probably an Ontario.

Don't think my other Marine brother carried a Kabar, probably didn't since he was an f/a-18 mechanic!

I enlisted in the AF in 81. I carried an old Endura with the full Spyderedge. I also had a Western (bought out by Camillus), double edged, boot knife. I got both of these at the BX.
I was issued one of the original Leatherman tools, as well.
Last edited: Nov 29, 2020
S

Bill Siegle said:
I had many different carry knives when I was in. There was the issue M9 bayonet for sure. Heavy beast that they made us tie down to prevent use and loss. Got in trouble for sharpening mine and a few others. I also carried a Western boot knife. It clipped on my LBE right behind an ammo pouch. Then there was a Gerber Parabellum which had a large black pouch and lived on my LBE. In my pocket I’d carry a Spyderco Hunter, Gerber Magnum LST, or a Benchmade Balisong. Once I discovered the Leatherman tools, I had one with me whenever I had pants on I always found it ridiculous that even though I was in the Infantry, command hated and banned edged weapons. Oh they taught us to believe “ Kill! Kill! Kill! With ice cold steel!!!!!!” But we’d catch a lot of flack for actually showing up with knives in view! That’s why my stuff stayed hidden/disguised
Click to expand...

All officers think about is what might happen to their personal careers if one of their troops missuses a knife, not what happens if he needs a knife for a legitimate military task and doesn't have it. Once I was sitting on runway in a strange place all rigged up for a parachute jump with the rest of my battalion. A guy in my squat pulled out a non-locking Case 2 blade folding hunter and was whittling on a stick or something. The company CO had a cow and took the knife away from him, saying he didn't want him going down town and cutting up some leg with it. The idea that he might actually need the knife on a real parachute jump we were going to make in an hour or so didn't enter into it.

When I got to my first non-training command I bought the nicest multitool I could find. I liked the Gerber best. It was a lot of money for me back then.

The first time I had it out, some boot 2LT said, “Hey, that’s a great looking Gerber. Can I check it out?”

He promptly dropped it into the sand...like, moon dust sand. Still with a good factory coat of oil, that sand got pulled into every nook & cranny.

It was a week before I was in a place where I could give it a good cleaning. Every time I endured the unpleasant sensation of sand against metal I cursed that dumb b**tard under my breath.

I guess that’s probably the first time I learned the “never loan your knife” lesson.

I used my yellow delrin Case Slimline trapper in CV during 8 years in USAF missile maintenance. Opening boxes, stripping wire & you name it..., opening box nasties (box lunches packed for our 18 hour shift) not MREs. 1971-1978. That knife was retired after 40 years of use. I'm currently working with it's replacement

Same one as a lot of other folks. 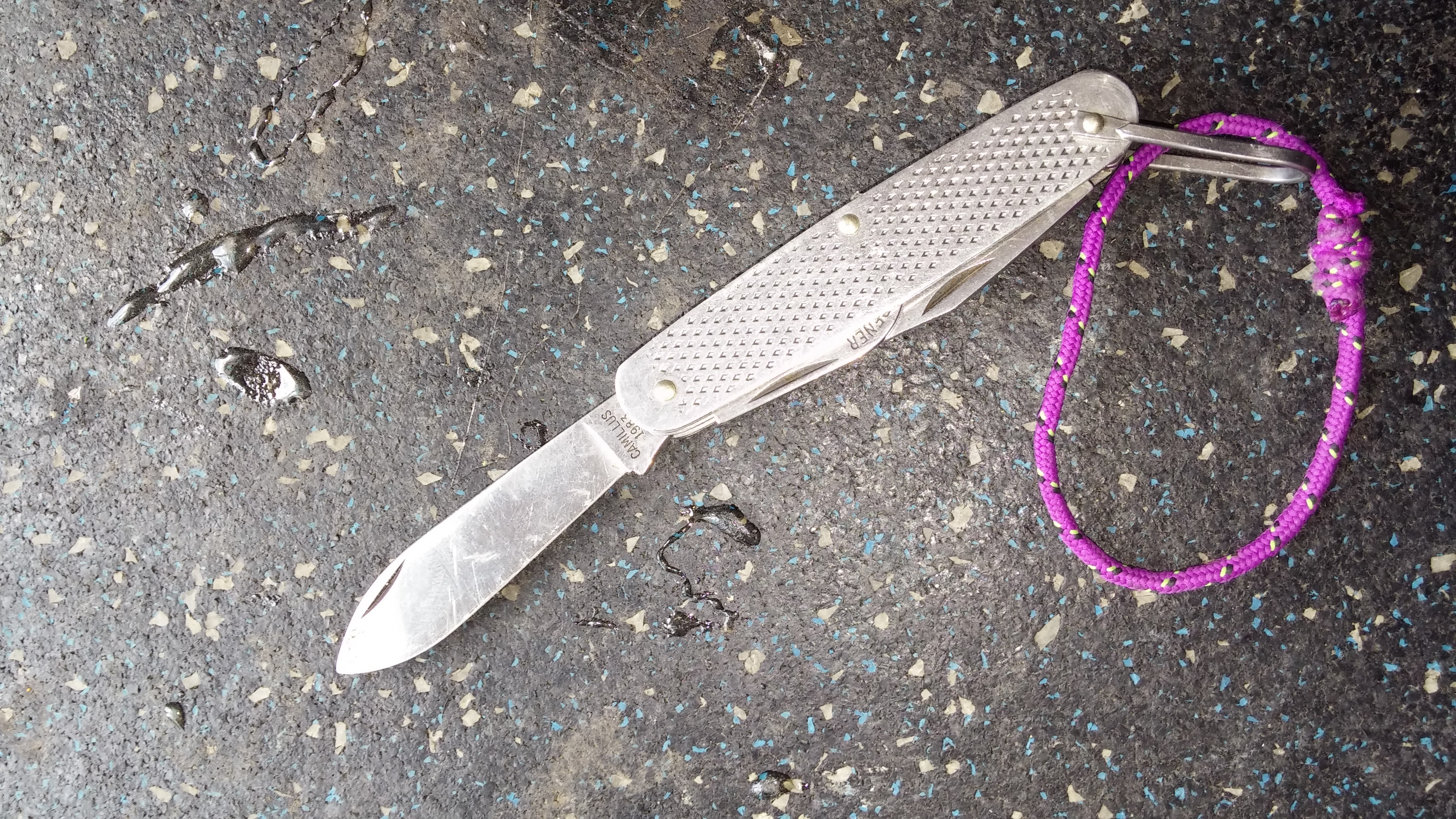 I was in the Navy, carried an Emerson CQC-11. I still carry it sometimes and it's in good shape considering everything it's been through.
A

Buck 110 and a Victorinox "woodsman".

My son (USMC) carried a Boker Applegate-Fairbairn in Iraq.

Edit: Interestingly, he had it on his left side, though he was right-handed. Perhaps he wanted to keep his right side clear for a gun or his metal detector (Combat Engineer). Don't know, can't ask him now.
Last edited: Nov 28, 2020
You must log in or register to reply here.
Share:
Facebook Twitter Reddit Pinterest Tumblr WhatsApp Email Share Link
Top
Change Ad Consent Do not sell my data