I recently partook in a pass-around (thread: https://www.bladeforums.com/threads/8-western-chef-knife.1860154/) hosted by

Diego_B . Here is a quick review and my thoughts on the knife.
Disclaimer: I am neither a knife maker nor a chef; I am merely a knife enthusiast.

The Knife
It's a beautiful knife. Grind is thin, edges are even, blade finish is a nice satin on the bevels and a smoothed 'as-forged' surface on the flats. The spine and the heel are gently rounded and polished. The handle (paper micarta) was well finished to a nice matte. The facets appeared symmetric and uniform. I was looking for something that didn't seem right (knowing it was a pass-around and expressly described as not finished up to his standard), and didn't find it. Everything about the knife is done well. 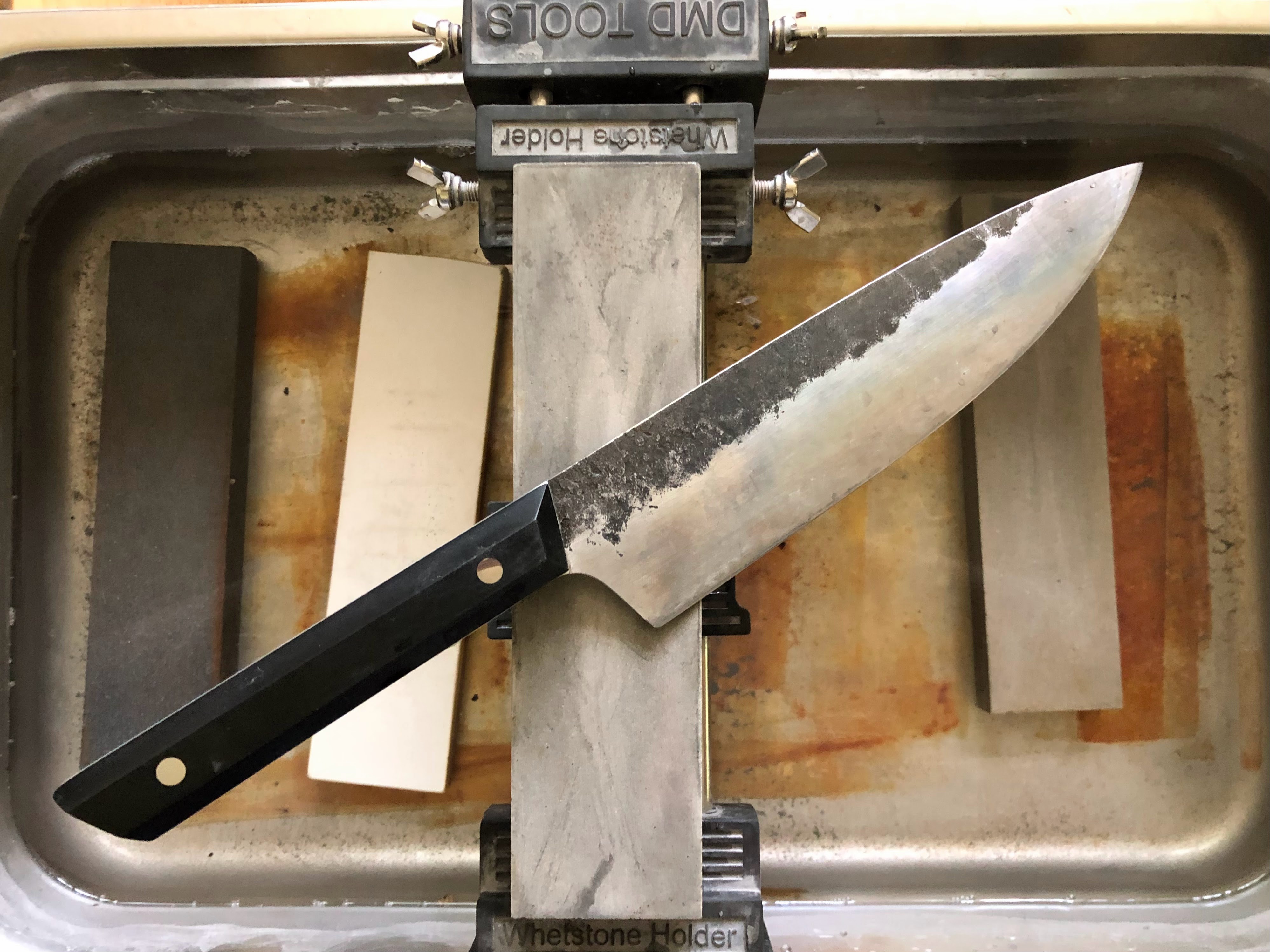 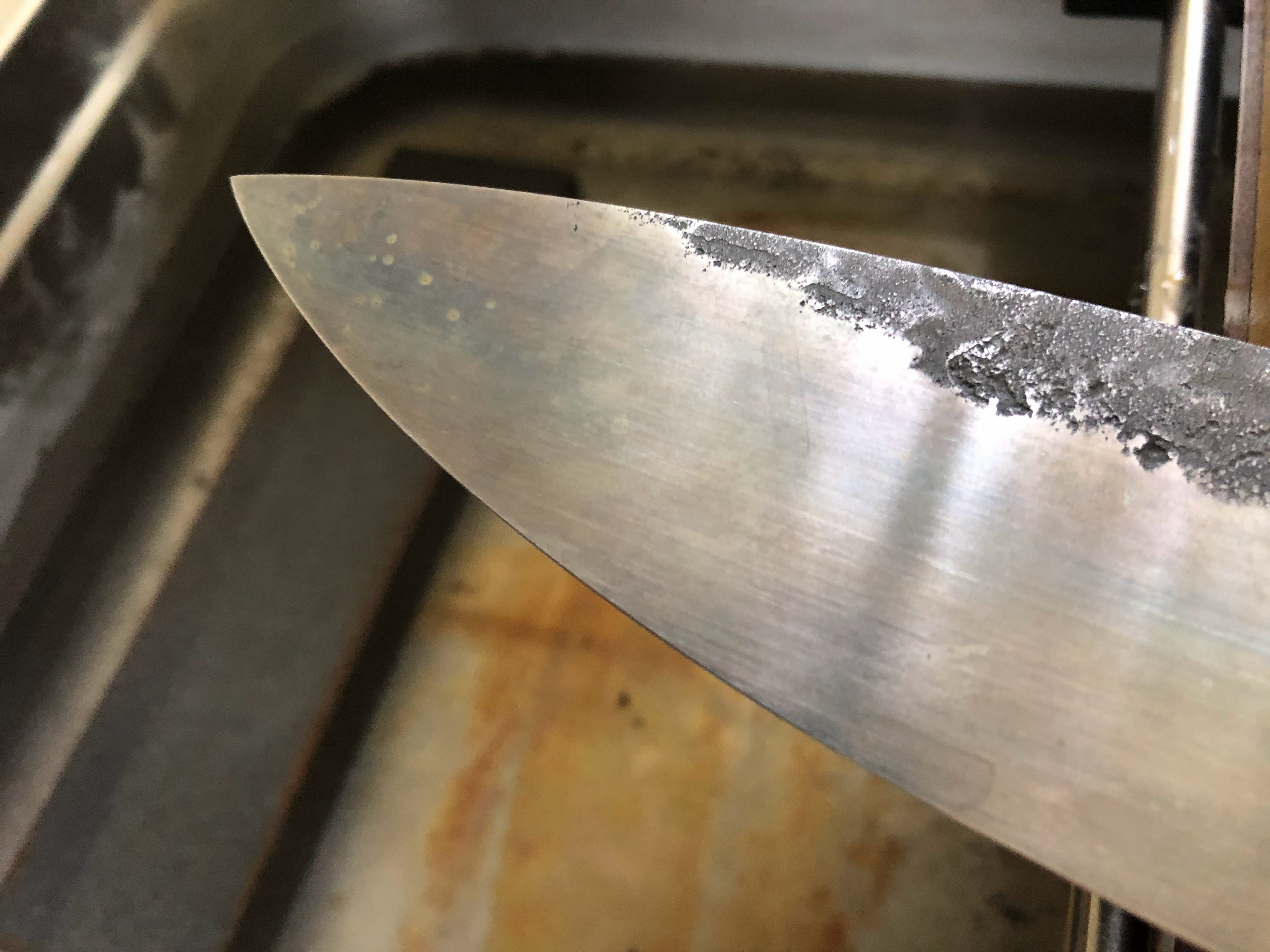 In Hand
It cuts admirably well. Thin behind the edge, tall bevels, and thin blade-stock, it moves through food as a proper kitchen tool should. The balance is right at the blade-handle transition, which is where my other chef-ish knives balance, so it seems right. It cuts with little effort and tracks and handles as expected. No surprise. Made easy work of tomatoes, apples, bread, chicken and is really pleasant to use. 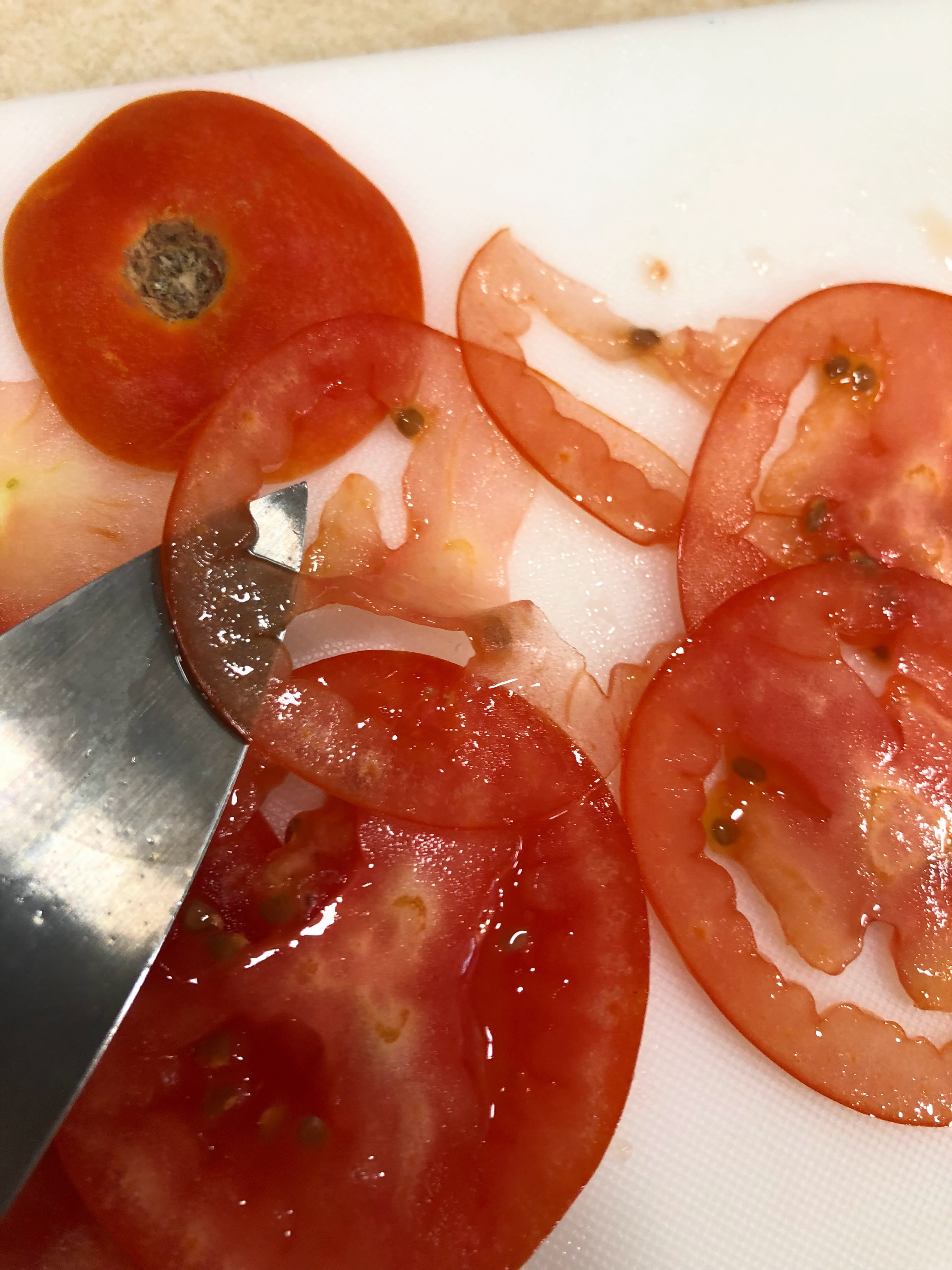 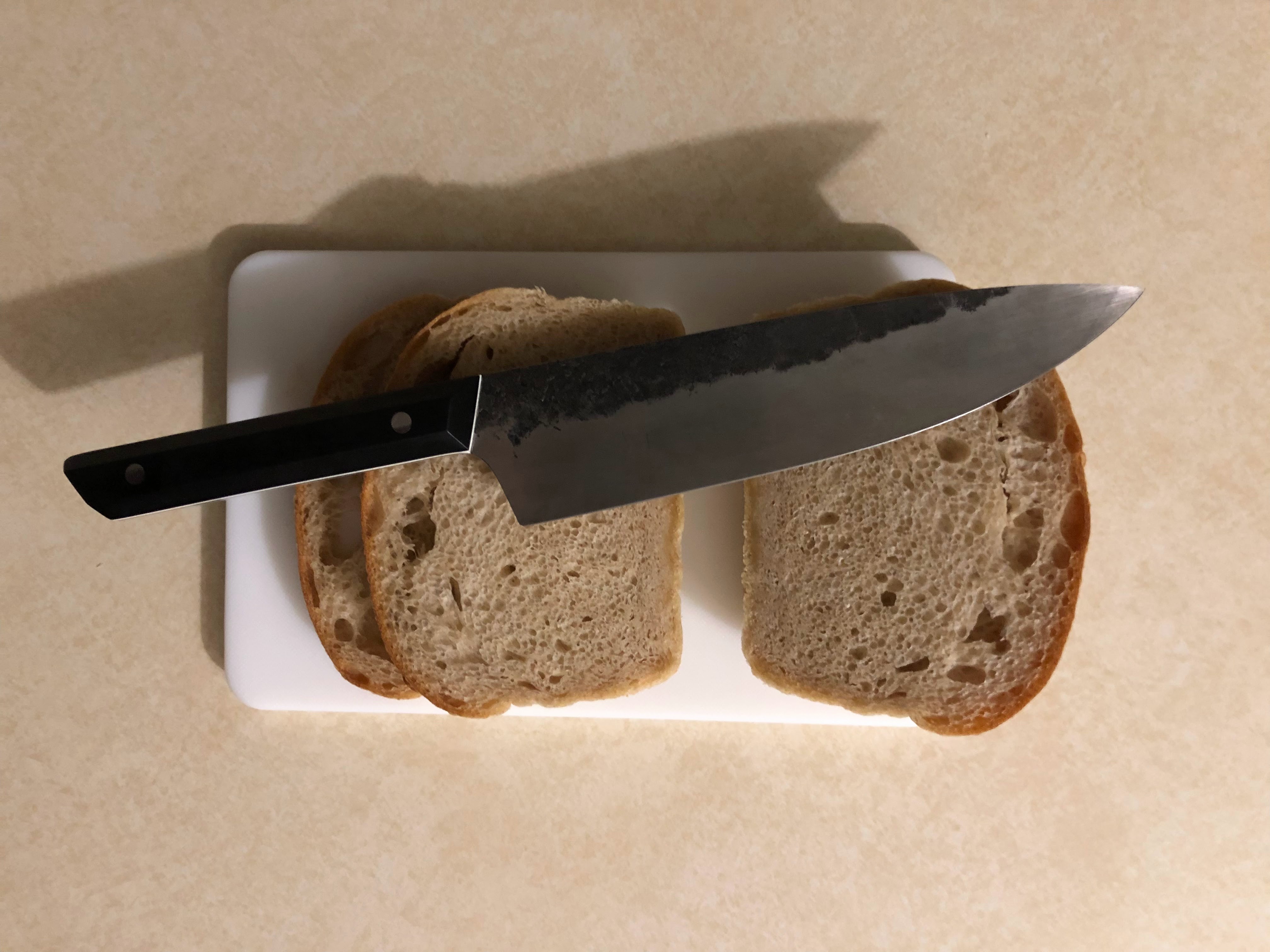 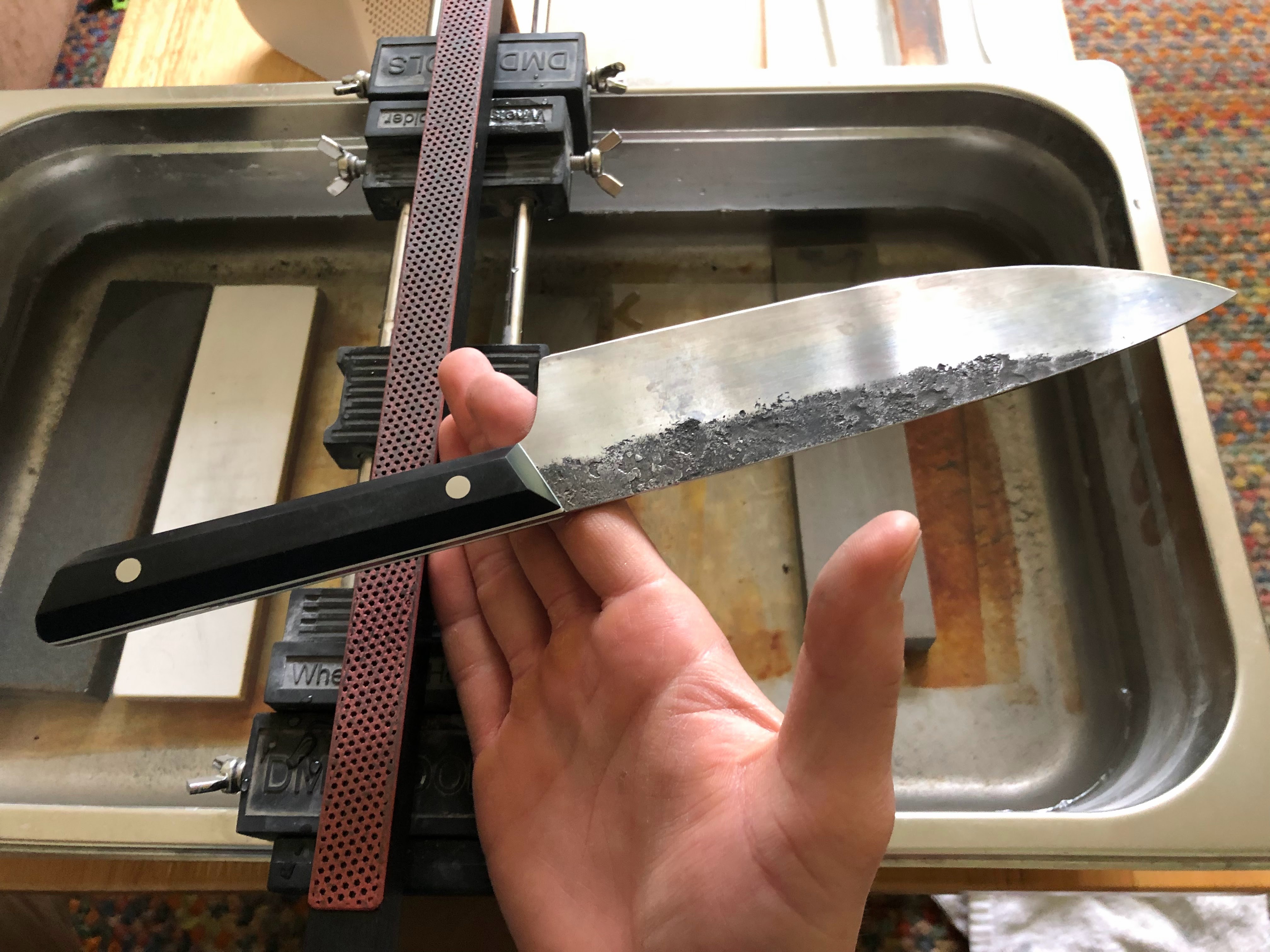 Sharpening
I was at least the third user in the pass-around, so it arrived needing a touch up. No edge damage, just not quite as sharp as I like. Which is great, because I love sharpening and it really tells you about a knife. The blade is O1, which I've had good luck with, and took a keen edge with ease. The steel is hard took a crisp edge. No frustrations with a stubborn bur or uneven bevels or anything. By the end of the week with daily use, I could tell it wasn't as sharp as when it started, but a couple passes on a loaded strop and it was right back at a razor edge.

Wife's Thoughts
She really liked it. Her favorite knife we have is the one that is 5th from left in the picture below, between the traditional Japanese blade and the Shun, so she likes a shorter knife. That said, this one is a comfortable length for her (the 10" Nexus being too big) and she enjoyed using it. She commented several times about it. 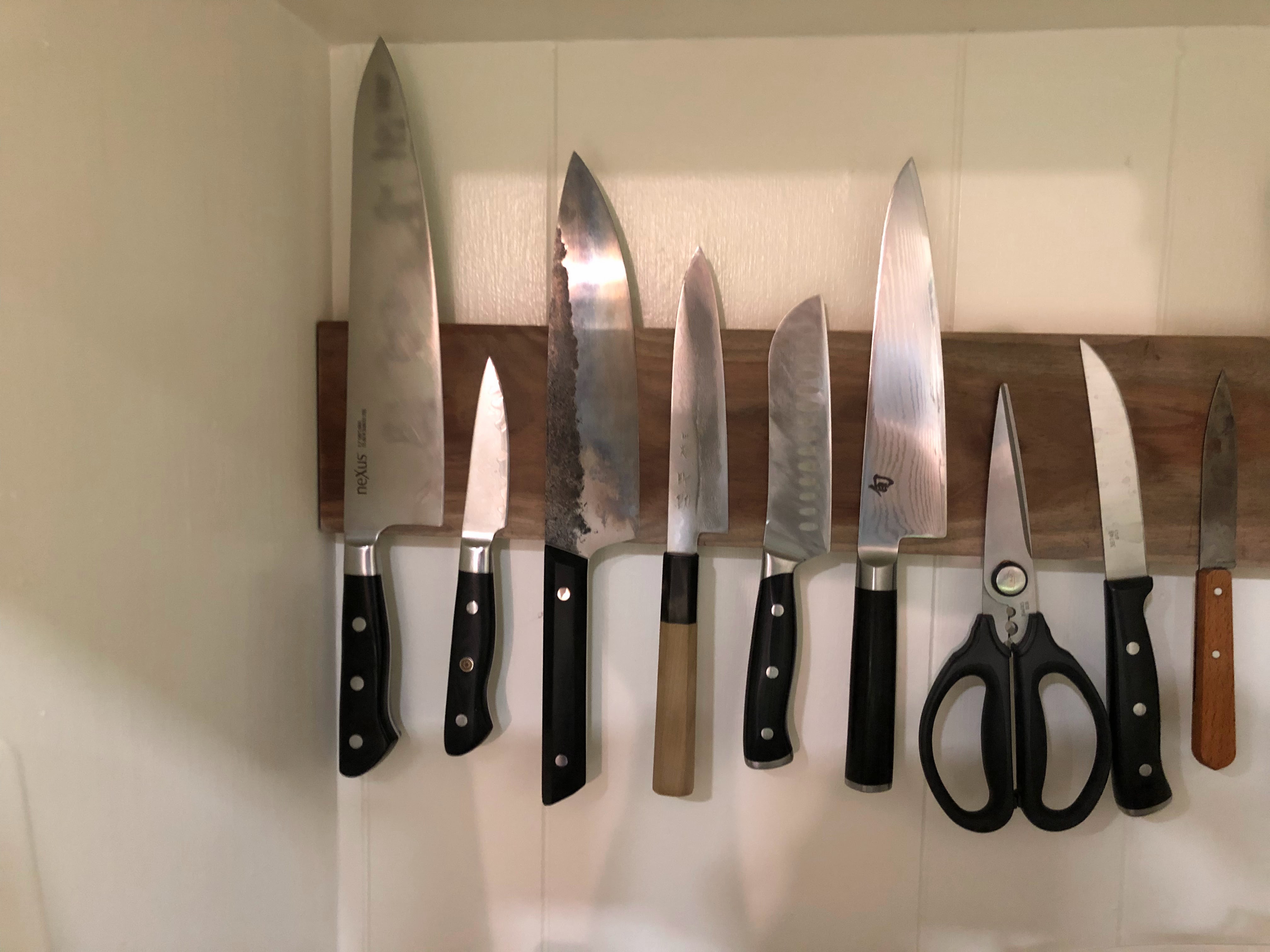 Opining and Preferences
I wanted to keep the knife. As far as I can tell, it is flawlessly executed. My only change would be profile. After using I realized I prefer the more 'eastern' inspired profiles, such our other knives have . The more gradual continuous belly seems to suit my cutting technique (however poor it may be) better than this more German profile. I can't really say exactly why, but I was less sure I had finished the cut all the way across the bottom of the target with this knife. I also feel the tip on this knife is a little harder to use in delicate trimming and other point work than on the other knives in the rack.

Here is a quick visual comparison to the Shun 7" Asian Cooks Knife, the best slicer we own. I'd say these are pretty much even in performance, though Diego's is decidedly better made.

And that's all! Thanks to Diego for sending this around. I really enjoyed it.