I just thought I would go ahead and write a honest review and post some photos of the process I went through with ordering an Expedition Cleaver and my thoughts and impressions regarding the blade.

This spring I decided to add a large chopper/machete to my camp pack as I find myself occasionally clearing branches around the campsite or processing wood for campfires. Most of my interactions with blades have been with either folding pocket knives or short fixed blades. Not having much experience on larger knives I set my journey I began searching online for a non-recurve blade that would be relatively easy sharpen vs a recurved fixed blade. That search led me to Kailash Blades, they had a selection of fixed blades designs with a thick heavy blades and were hardened using an oil quench instead of water resulting in a more consistent heat treatment from my research. Before placing an order for my first Kailash Blades knife I wasn't able to find much in the way of feedback on the Expedition Cleaver. I reached out to Kailash and talked to Bisnu, he answered what questions I had and gave me an ETA for the completion of the blade.

I went ahead and placed the order. Every couple of days I received an update email from Bisnu as the blade moved through the different stages of manufacturing along with photos of the blade as it progressed through each stage.

First was the initial shaping and forging. 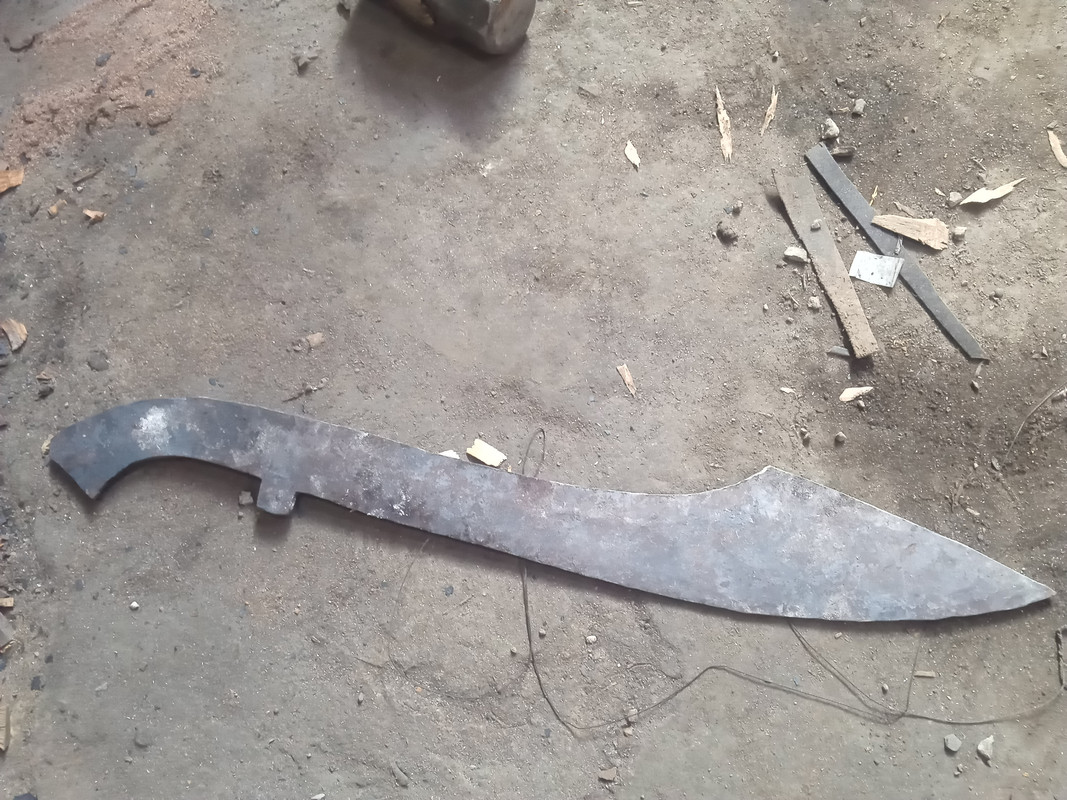 Then the blade was cleaned up and the lines refined and the fullers cut. 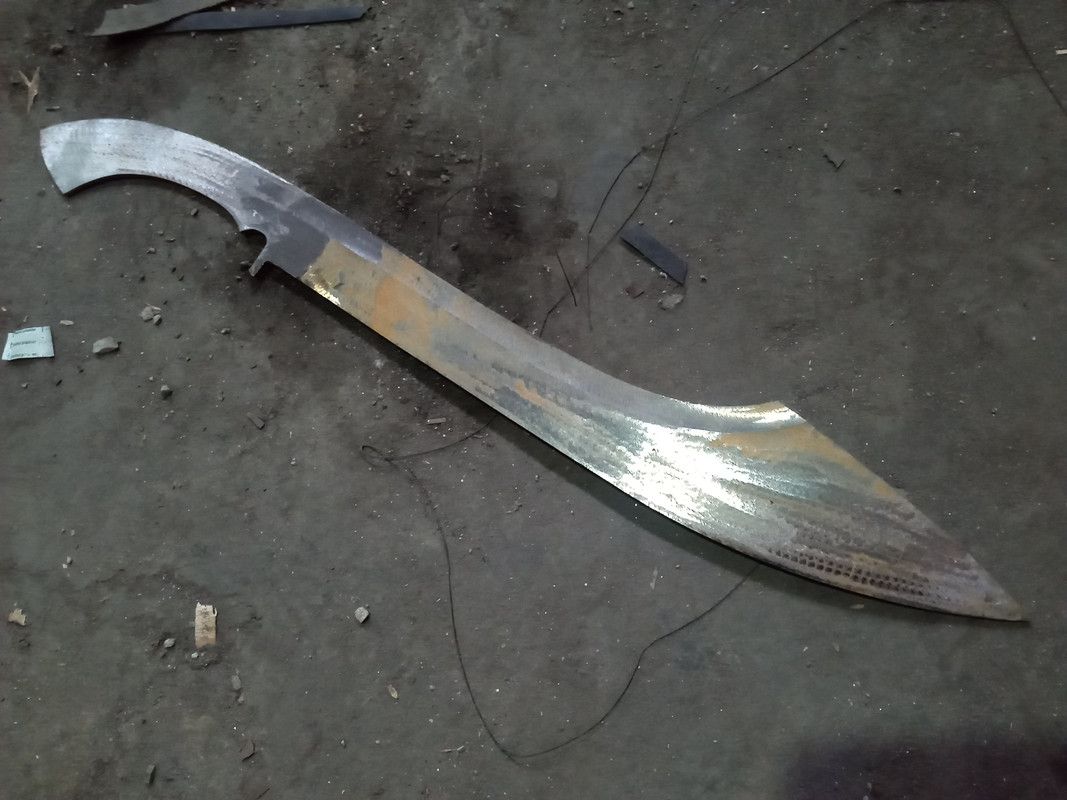 It was then quenched and heat treated. 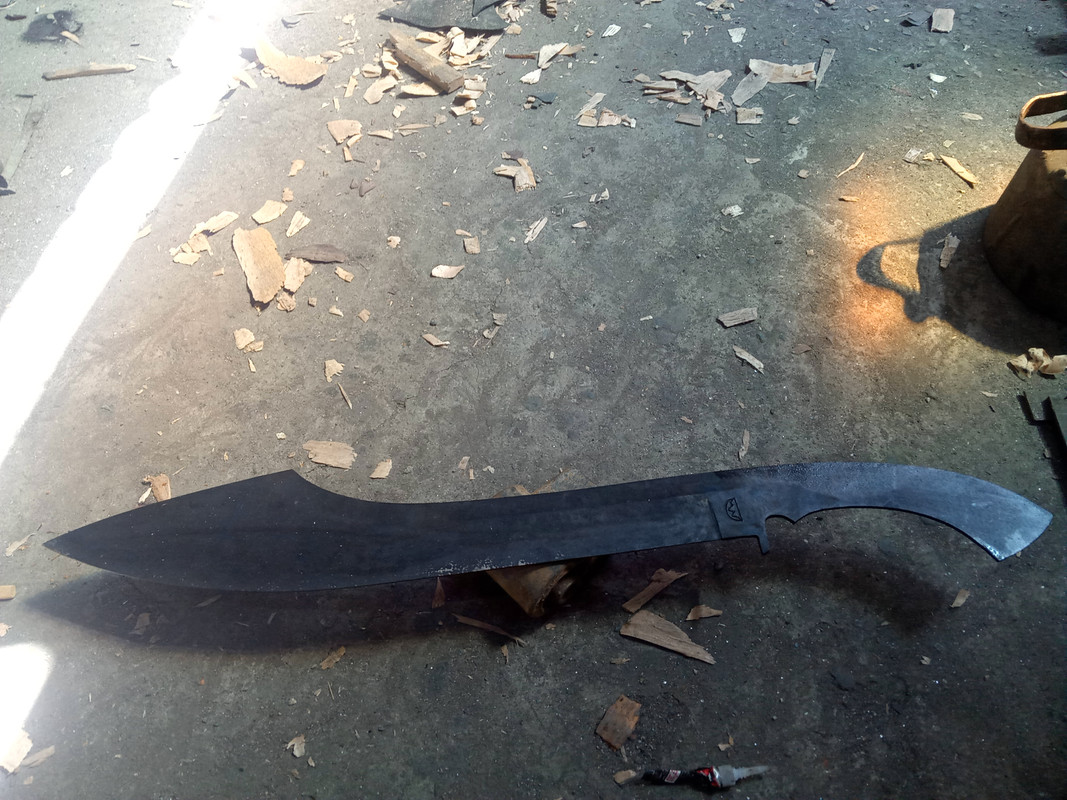 The blades was finished to a rough satin finish and the Micarta handles attached. 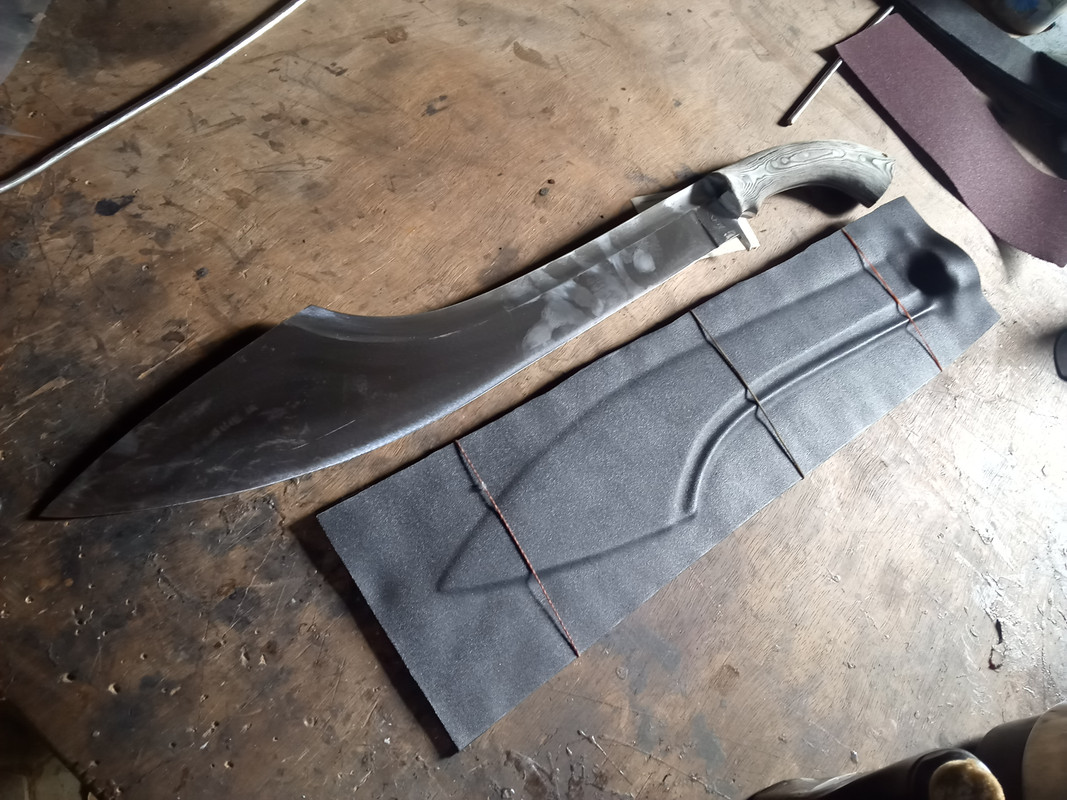 Then it went over to get fit for a Kydex holster. 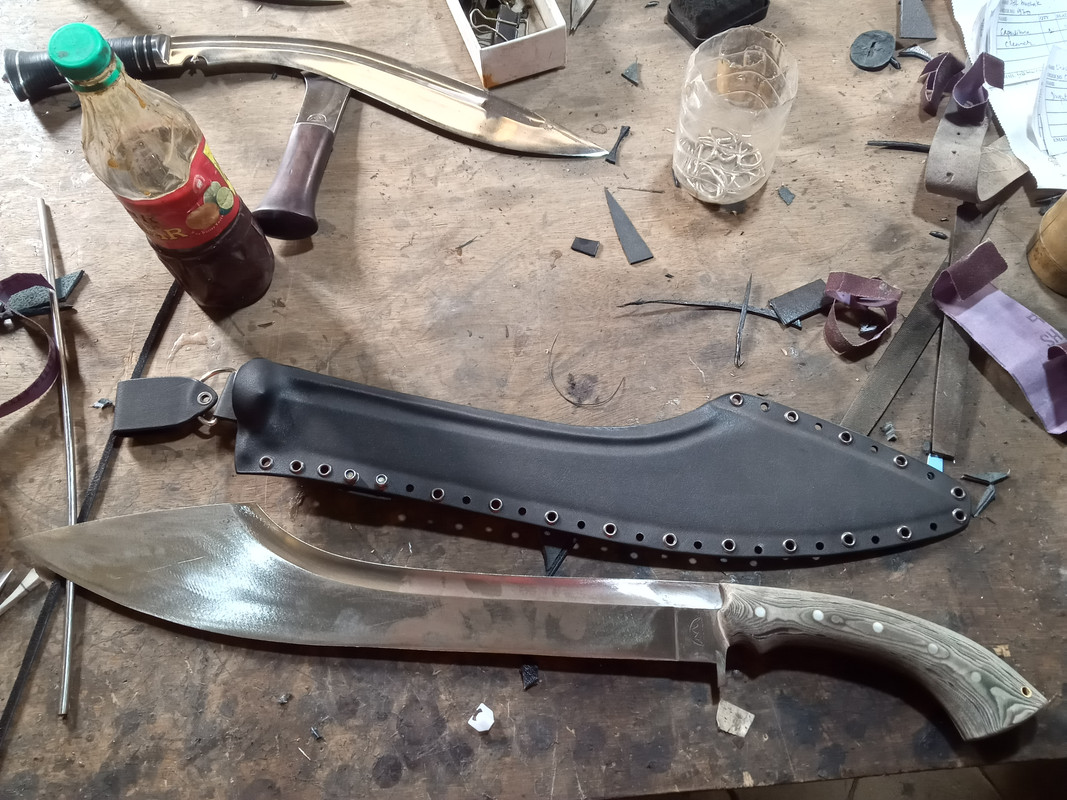 Finally it went over for a final satin finish and polish and sharpened. 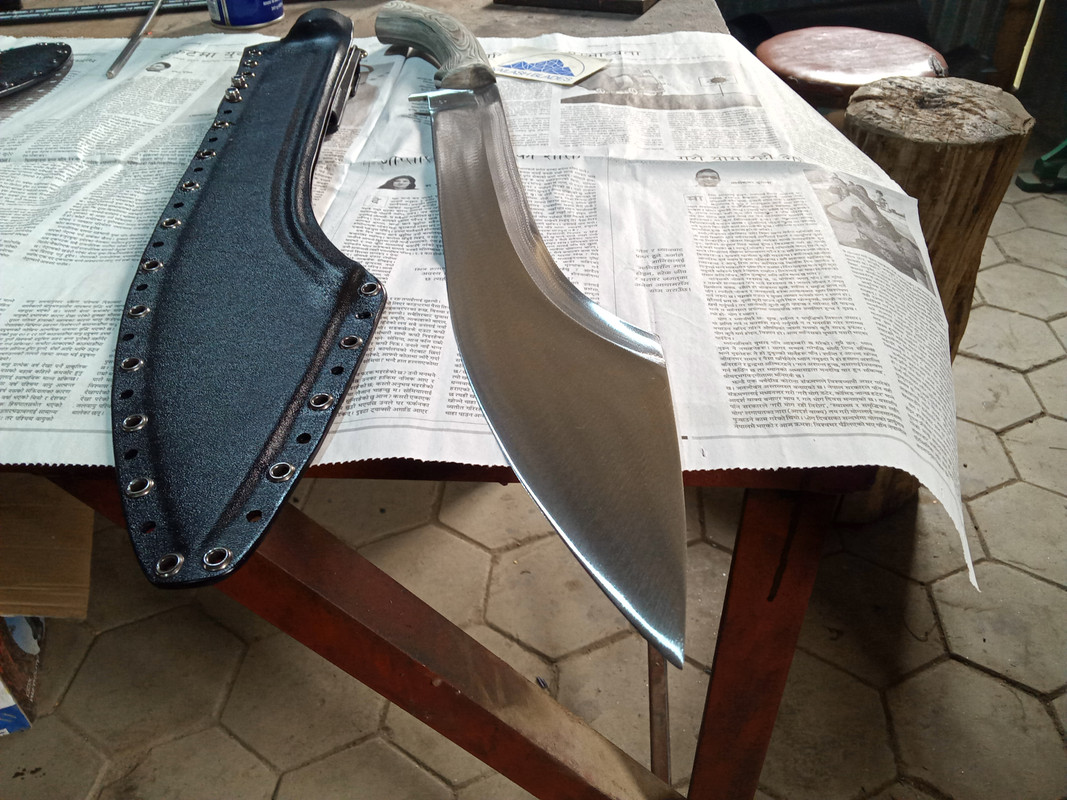 What really pleasantly surprised me was the shipping, it took a could days to get from its home in Nepal to Dubai via cargo and then it was handed over to FedEx and FedEx had it to me in less than 3 days. Totally shipping to the Northwest USA was under a week.


Now we can get into the discussion of the blade. The Expedition Cleaver arrived in perfect order, it was drenched in oil for transport and was to be carefully cleaned up as it the sheath was full of oil and did not have a drain hole at the tip to allow the oil to eventually drain out. But it had arrived and free of rust or cosmetic issues due to shipping. Here are some photos I took of the blade the day it arrived. 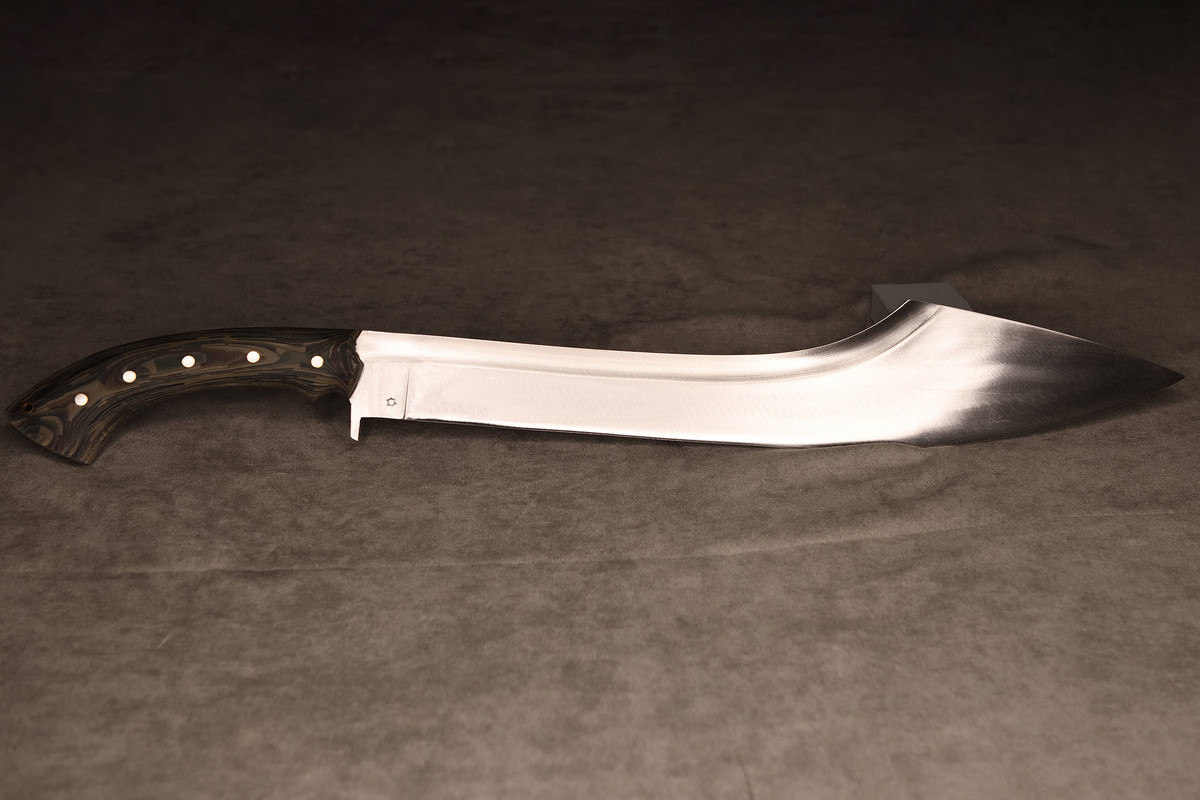 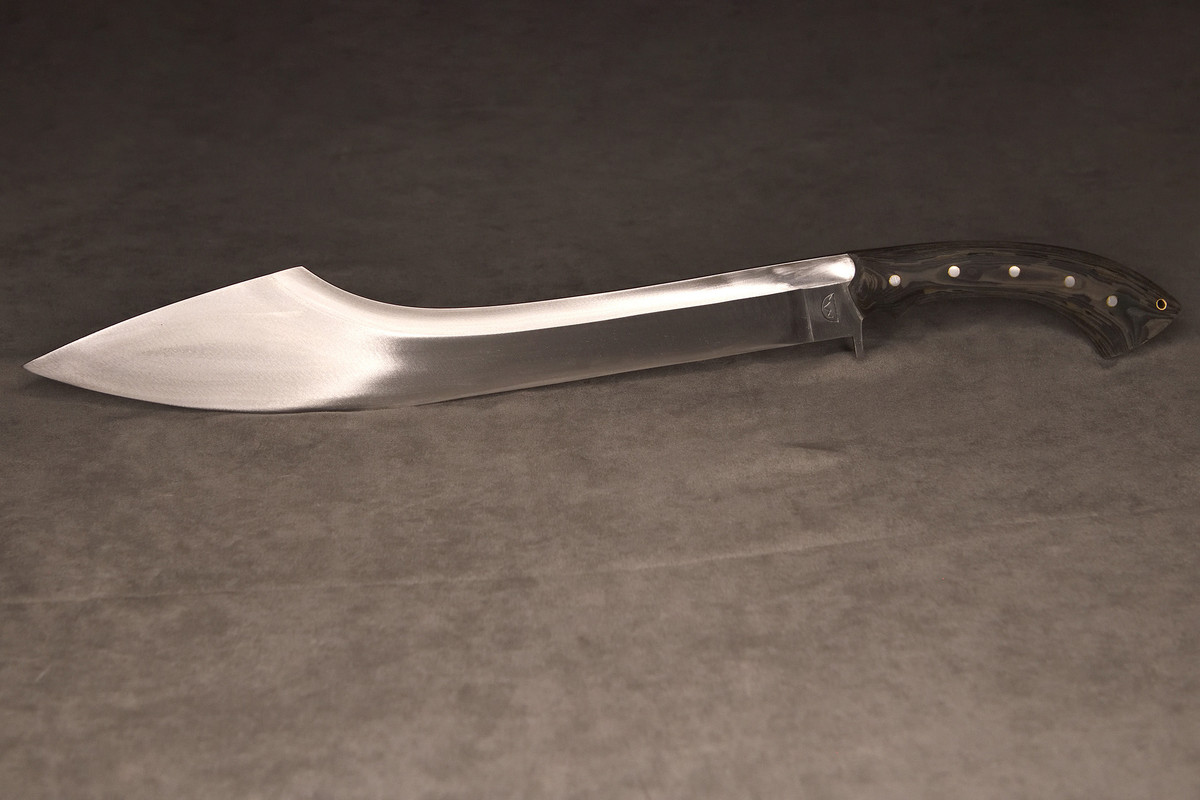 As you can see the handles came out very nicely, and the forest Camo Micarta was spot on. I went out to my favorite patch of the wild and did some test cuts with the blade. However, my first session was cut short very quickly. After the first two cutting swings I realized the front finger guard was still sharp as seen in these photos. 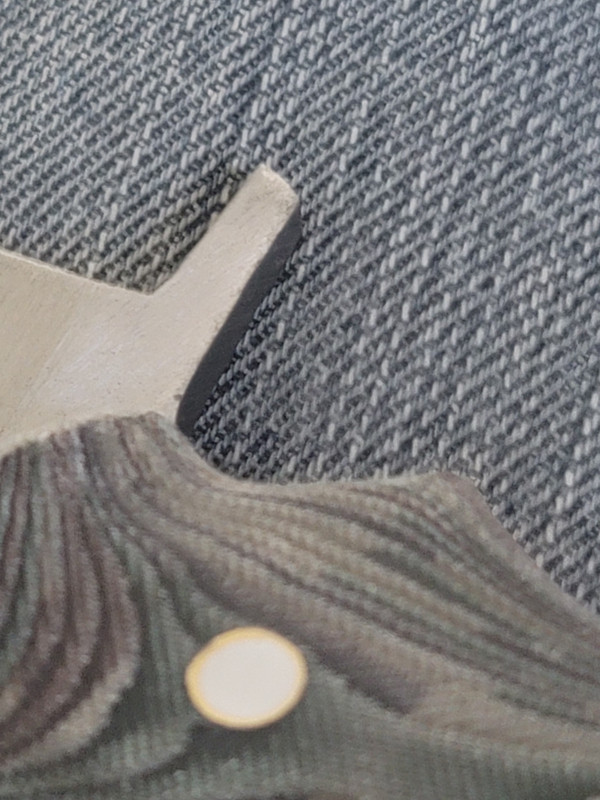 It was still cut at a 90 degree angle which resulted in edges that were sharp enough to cut. I emailed Bisnu and he apologized and assured me they would be more diligent about checking that in the future and was suggested that the edges would need to be filed down. I did not wish to freight it back to Nepal for such a minor job. I whipped out my file set and began to reshape the front guard and remove the sharp angles and get a nice rounded guard. Thirty minutes later the guard was finished. In the process I found the rear of the blade had a similar sharp edge. I pulled out my 200 grit stone and rounded the spine on both sides and finished it with a 600 grit stone. Now the guard and spine were smooth to the touch and did not have any catchy edges. I did not have time to return to the forest, but being spring my Quaking Aspen tree had some limbs to volunteer as tribute. My wife determined which limbs would need to be removed for this season and I sawed the limbs off and then propped them up on the fence. Multiple cuts were made on several two inch limbs and I was able to cut through several times with one swing. This time no cuts to the finger this time around. I am very happy with the blade.

The sheath was very usable in its stock form. 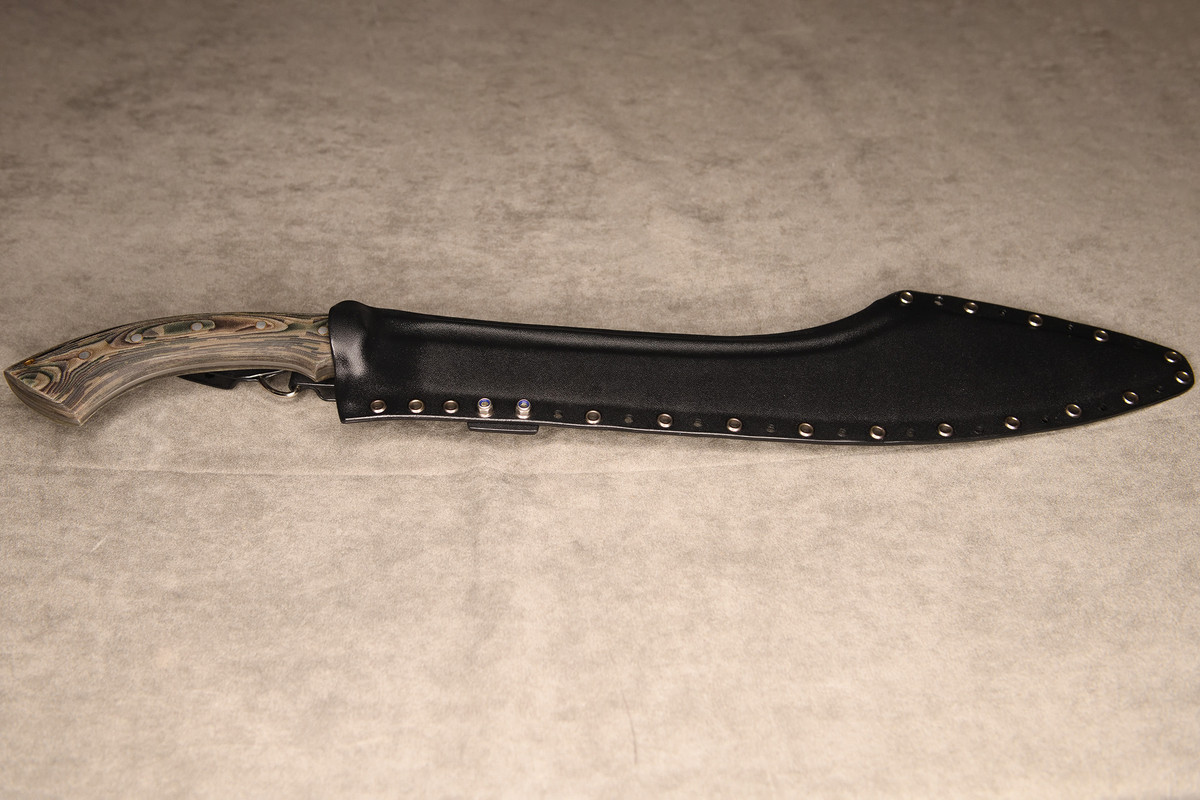 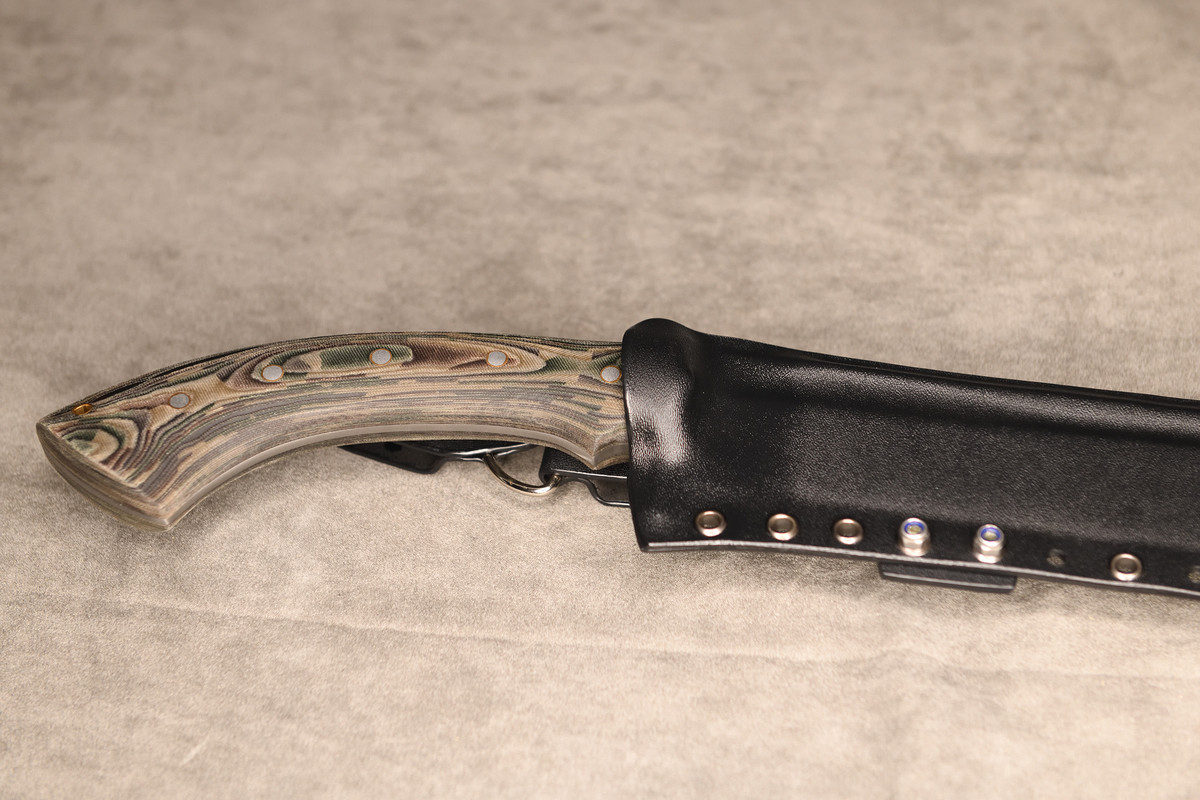 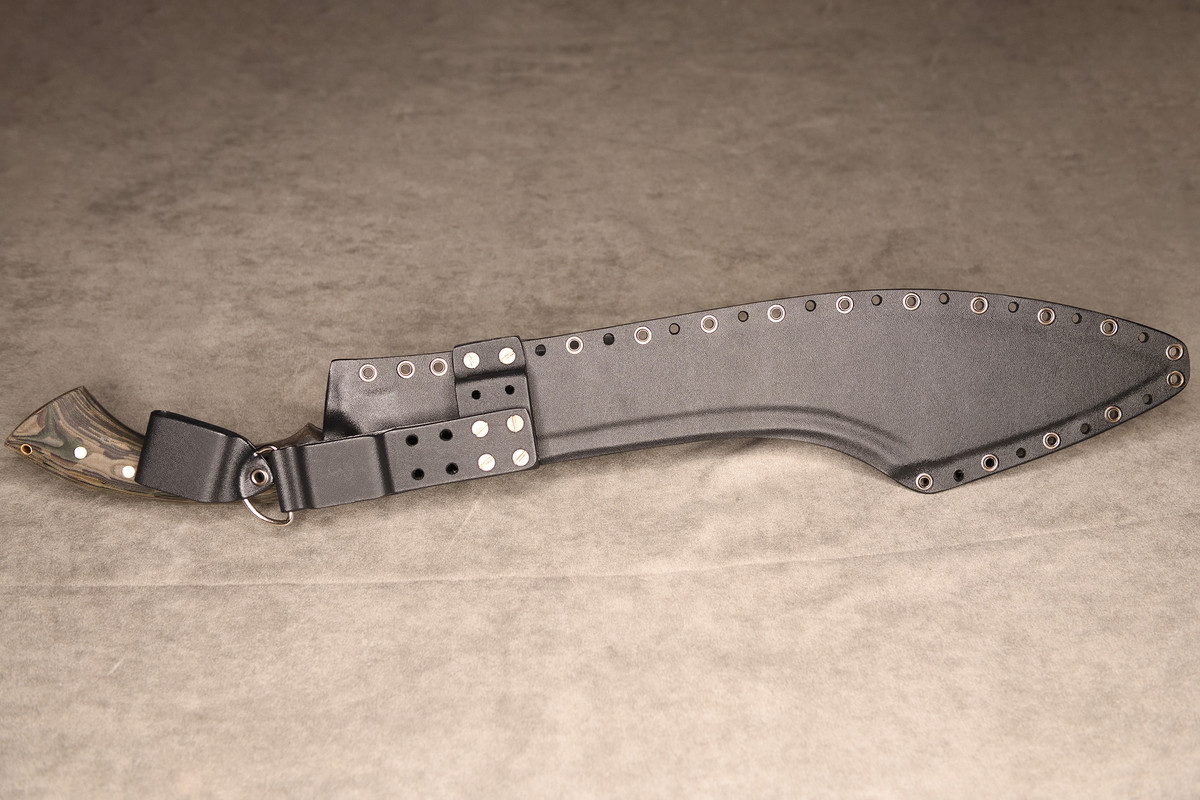 However, I wanted to be able to use standard 1/4 mounting hardware. The rivets used by Kailash are in a 1/4 inch hole but they are a two part press rivet which has an internal diameter of around 5mm or 3/16ths. I was not able to source 3/16 Chicago screws in the style I wanted, so I drilled out the original rivets and had my cousin use his arbor press to install standard 1/4 eyelets in both the sheath and the hanging hardware. Here are some after pictures. 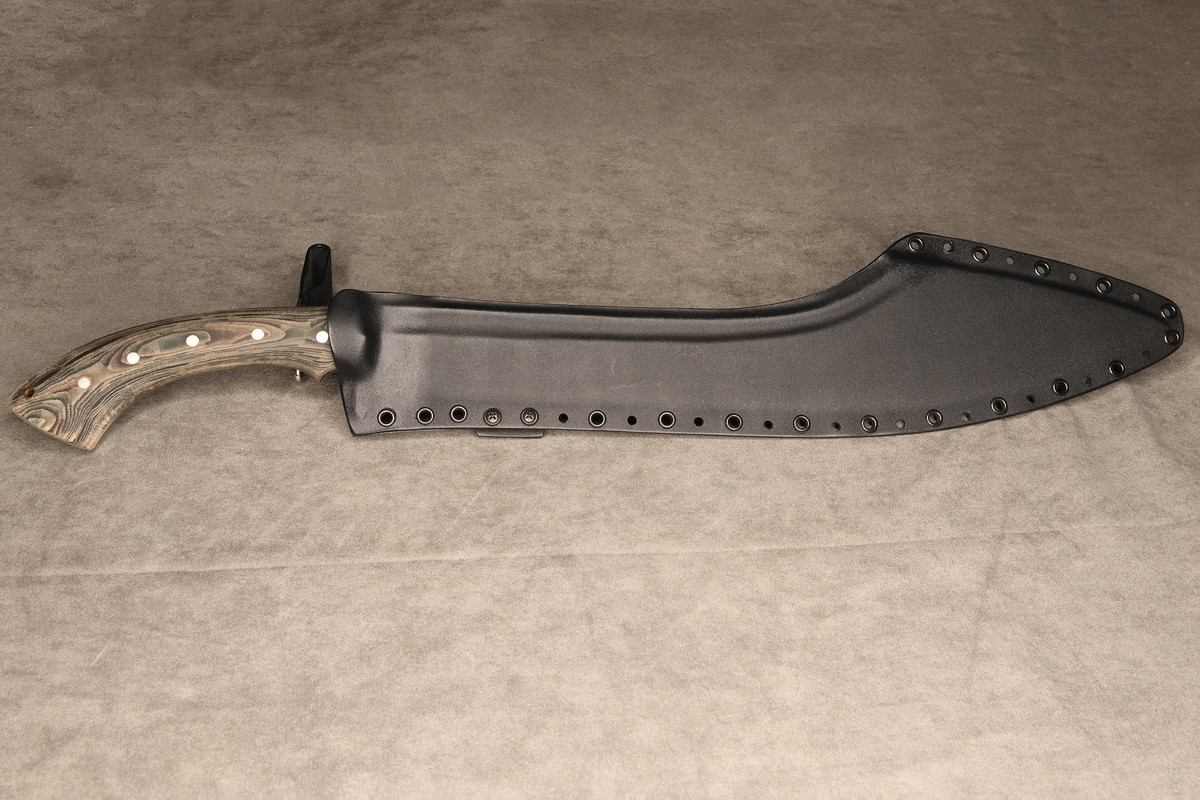 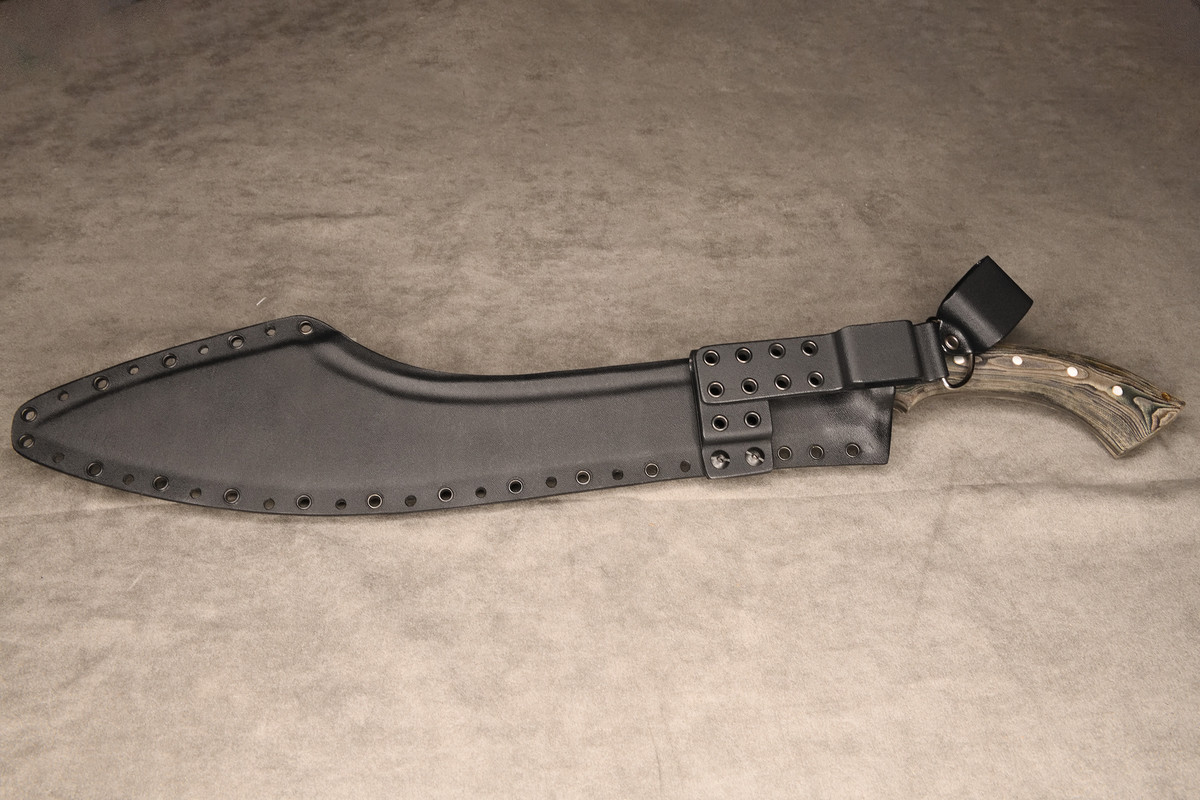 All in all I would highly recommend Kailash Blades, they were definitely easy to work with, highly communicative and on time with their delivery estimates. Even with some of the small thing I had to fix the blade was a good value and a good cutter. I would suggest asking to have the spine rounded by them ahead of time as part of the order. The only other change I would make is to the handle. I wish the straight part was at least one inch longer before the curve started, right now its an hand and 3/4, it would be great to be able to get both hands full on the blade for a full power swing with both hands if needed.

Hey Jeff! Thanks so much for taking the time to share your thoughts and experiences and write up such a great review
These are some beautiful photos- I don't think I've ever seen the forest camo micarta looking so good! It's also great to hear that you're happy with the blade overall after your modifications. Thanks so much for the feedback on the sharp parts of the spine- it's the kind of small improvement we can make which will help us elevate our game. Thanks also for raising our attention to the eyelet sizing we're using. When we first started making kydex we used standard eyelet sizing but it must have transitioned in the last year or two due to material availability issues. I'll raise it with the time and hopefully we can restock (and get some chicago screws) on our next trip to India.
Take care,
Andrew and the team at Kailash.
H

In my mind the knife can not be released by the sheath because the tip end is so much wider than the narrow part of the rest of the blade and won't fit thru the kydex channel.

My mental picture does not translate to words.

TLDR: that is impossible to remove from the sheath, I know I'm clearly wrong.

The sheath is an open back designed. The opening is from the handle to the flare. 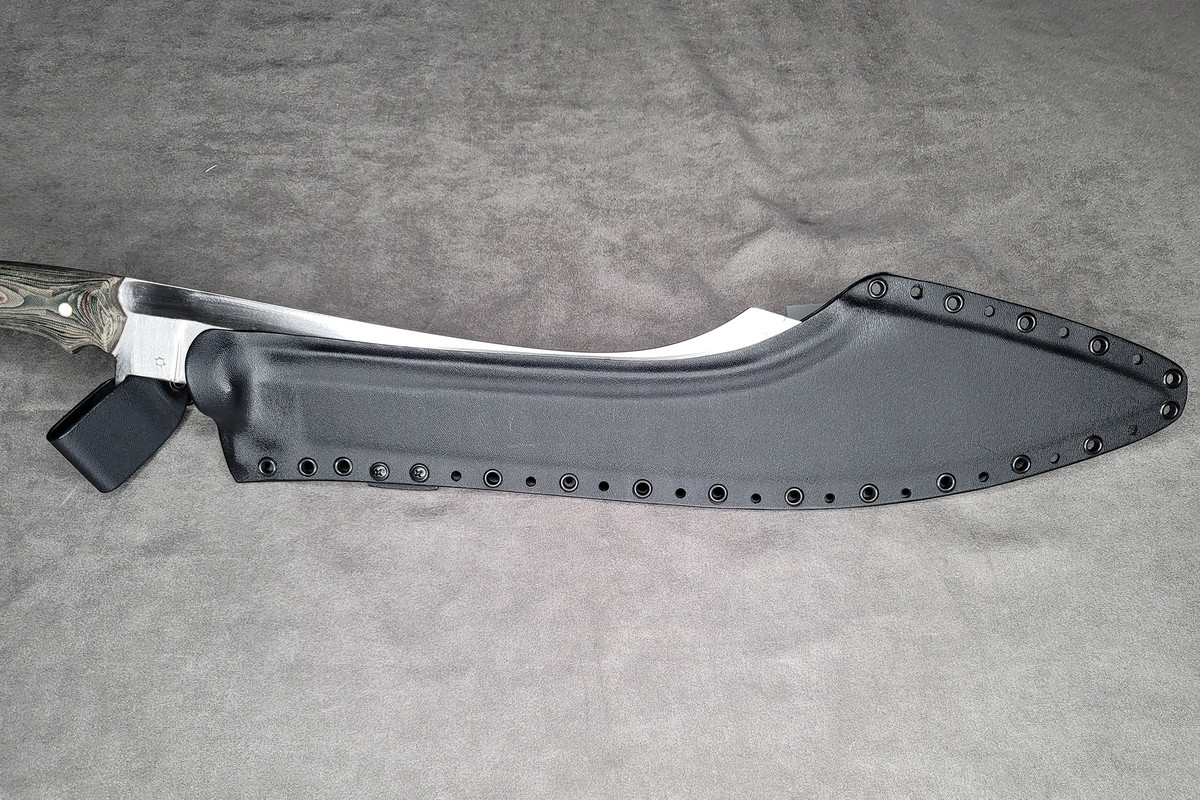 Kailash Blades said:
Hey Jeff! Thanks so much for taking the time to share your thoughts and experiences and write up such a great review
These are some beautiful photos- I don't think I've ever seen the forest camo micarta looking so good! It's also great to hear that you're happy with the blade overall after your modifications. Thanks so much for the feedback on the sharp parts of the spine- it's the kind of small improvement we can make which will help us elevate our game. Thanks also for raising our attention to the eyelet sizing we're using. When we first started making kydex we used standard eyelet sizing but it must have transitioned in the last year or two due to material availability issues. I'll raise it with the time and hopefully we can restock (and get some chicago screws) on our next trip to India.
Take care,
Andrew and the team at Kailash.
Click to expand...

Thanks Andrew! Photography is one of my other hobbies. Yes the Micara handles look absolutely amazing in person the photos Binsu send did not do them justice. I also believe unbiased alternative perspectives can also help drive new and existing products forward towards an even better final product. Kailash really made a splendid blade. I do recommend getting an arbor press to press in the new style eyelets. They take only a couple seconds to press in, and the arbor press gives a much better final product I feel than the hand tool version and its much much faster. I suggest using whats called an "Open Back Slotted" Chicago screw, they are nice in that you can use thread locker compound if desired to prevent them from working loose, but you have the slots on both sides of the Chicago screw to use a screwdrivers to loosen them. Even if you do not have an economical source in India for the Chicago screws, just having the other style eyelets would allow buyers to pick up a Chicago screw style that works with their specific need quite easily. 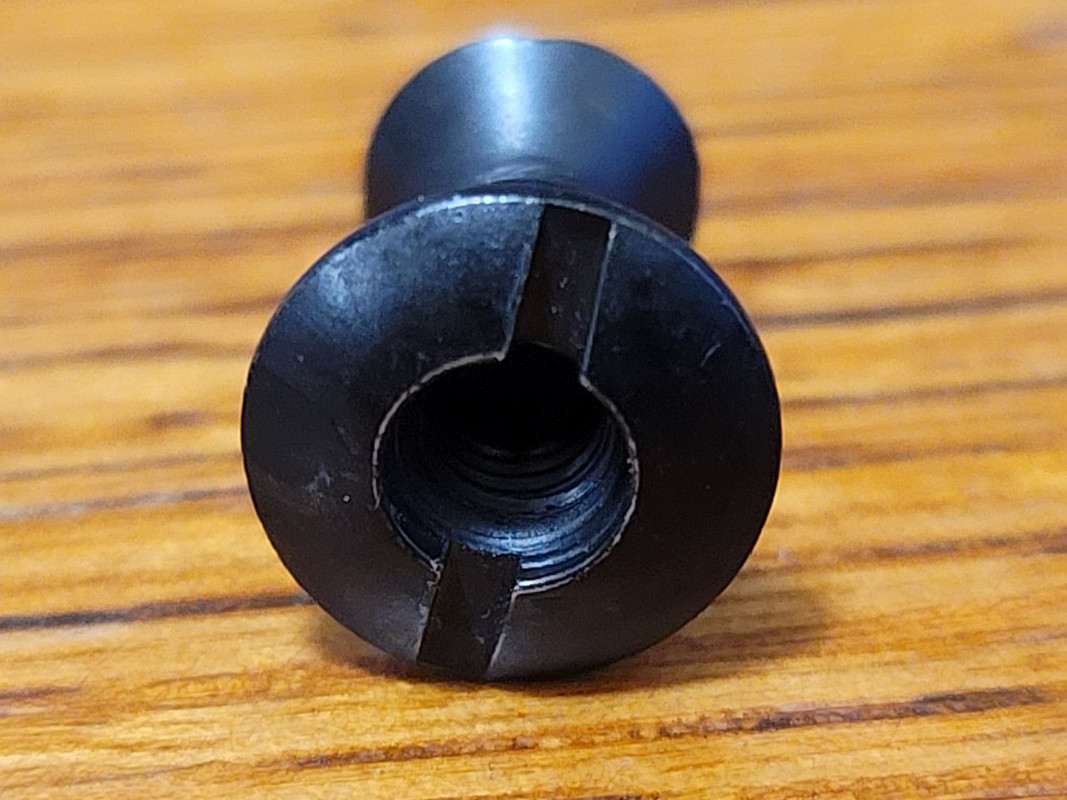 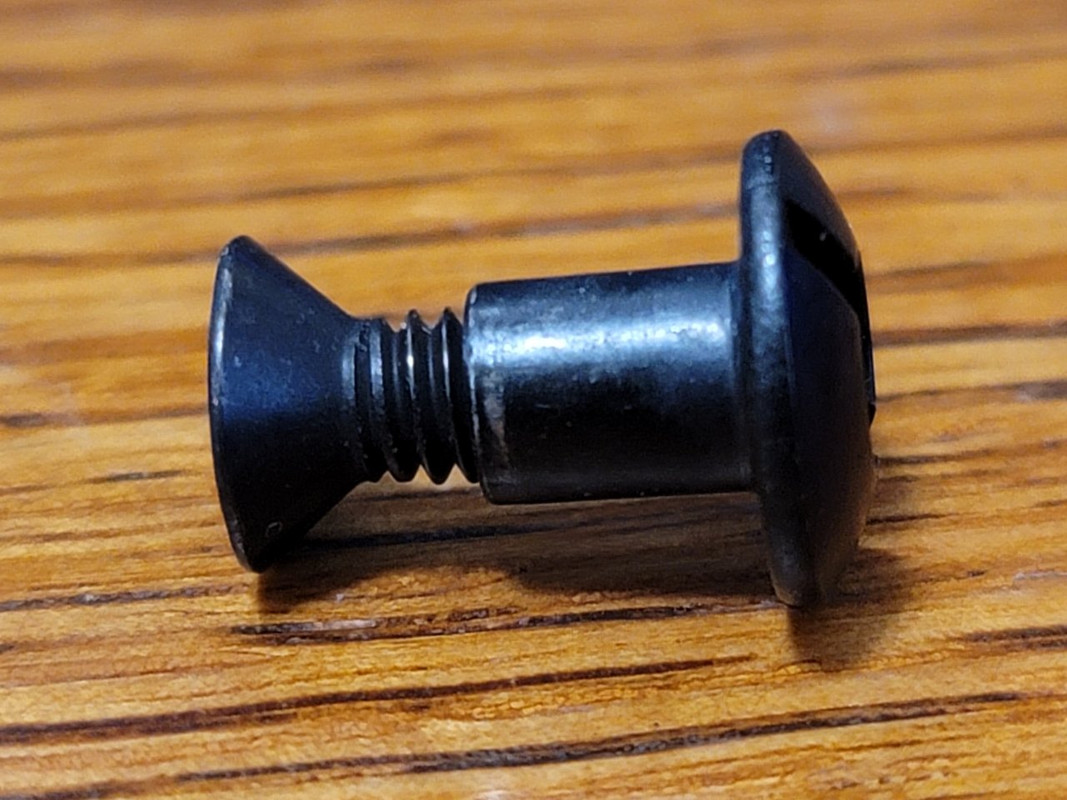 Houlahound said:
In my mind the knife can not be released by the sheath because the tip end is so much wider than the narrow part of the rest of the blade and won't fit thru the kydex channel
Click to expand...

Open backed sheaths are definitely a little confusing at first! the majority of the blades we make are khukuris with broader bellies than waists so openbacked sheaths are very common for us. They're quick to draw and easy to clean out too. It's important to have a high degree of retention and click though to hold a larger blade like this is place. We've made a few nylon webbing retention straps for blades of this size on customs as another failsafe.
What do you guys think, should we start doing it as standard on our blades larger than 16"?

That may work well. How does it mount to the sheath?

propbuildervash said:
That may work well. How does it mount to the sheath?
Click to expand...

Just my two cents worth.

Given the blades are 5160 under controllable circumstances if the nylon webbing strap may gets sweaty or wicks moisture. I would want to avoid it having prolonged contact with the blade. The sheath for the expedition cleaver clamshells over the spine sufficiently that is should be fine.

As you can see in these photos I went a similar but different route. I used a 1/4 eyelet compatible "pull dot" snap male end, and a length of solid waterproof coated tactical webbing with a female pull dot mounted to that. This gives me the ability to release the strap one handed and because a "pull dot" snap is a directional snap it is much more secure than a normal button snap. It also wont retain moisture and is weatherproof. 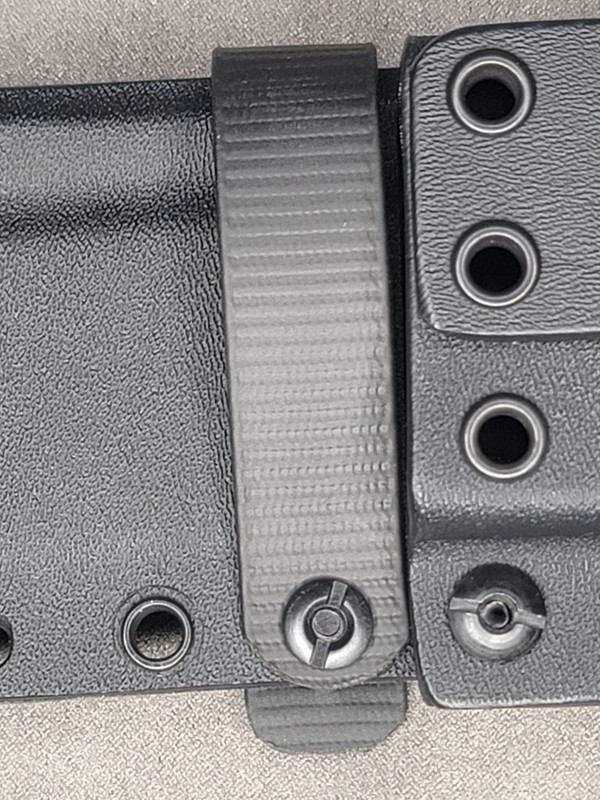 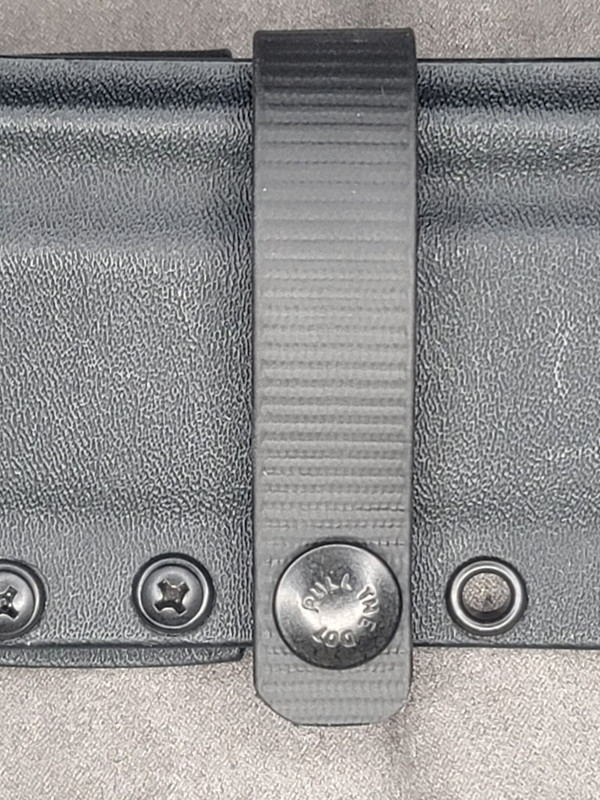 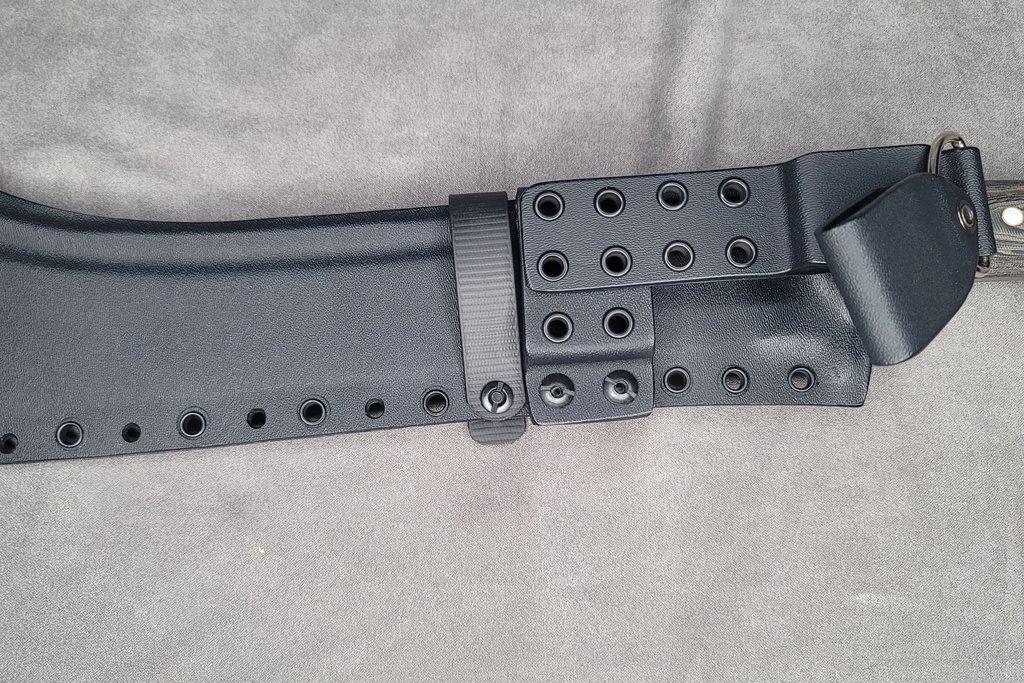 Wow- that's a very clean and professional looking solution. I've looked into these pull dot style snaps and unfortunately our only option is to import them which runs into a lot of challening tarrifs and makes it a struggle to be a financially viable option. With this in mind maybe the buckle would be a better move?

The buckle would work well as long as its easily removed with a single hand. I personally would prefer to go with a leather band with a snap due to the simplicity and quick release nature.
You must log in or register to reply here.
Share:
Facebook Twitter Reddit Pinterest Tumblr WhatsApp Email Share Link
Top
Change Ad Consent Do not sell my data