Actually I have a couple questions. So I’ve never done an S grind on a chef’s knife before and really want too!
Question 1) from the apex of the edge how far back do you usually make the “bump” (for lack of a better term)
2) how thick do you usually make that bump?
Obviously the goal is that the food falls off after you make the cut, I’m just trying to find out a good starting point for dimensions/angles, then I’ll go into my own tasting. I’d be very grateful for any tips on how y’all go about this!

I think there is no generic answer to your question, since it will depend on the stock thickness and the size of you wheel/platen. Also maker have different preferences, check for example diamond grind from Vachon knifes (tutorial on I sta). Salem Straub also shows his s grind on insta. 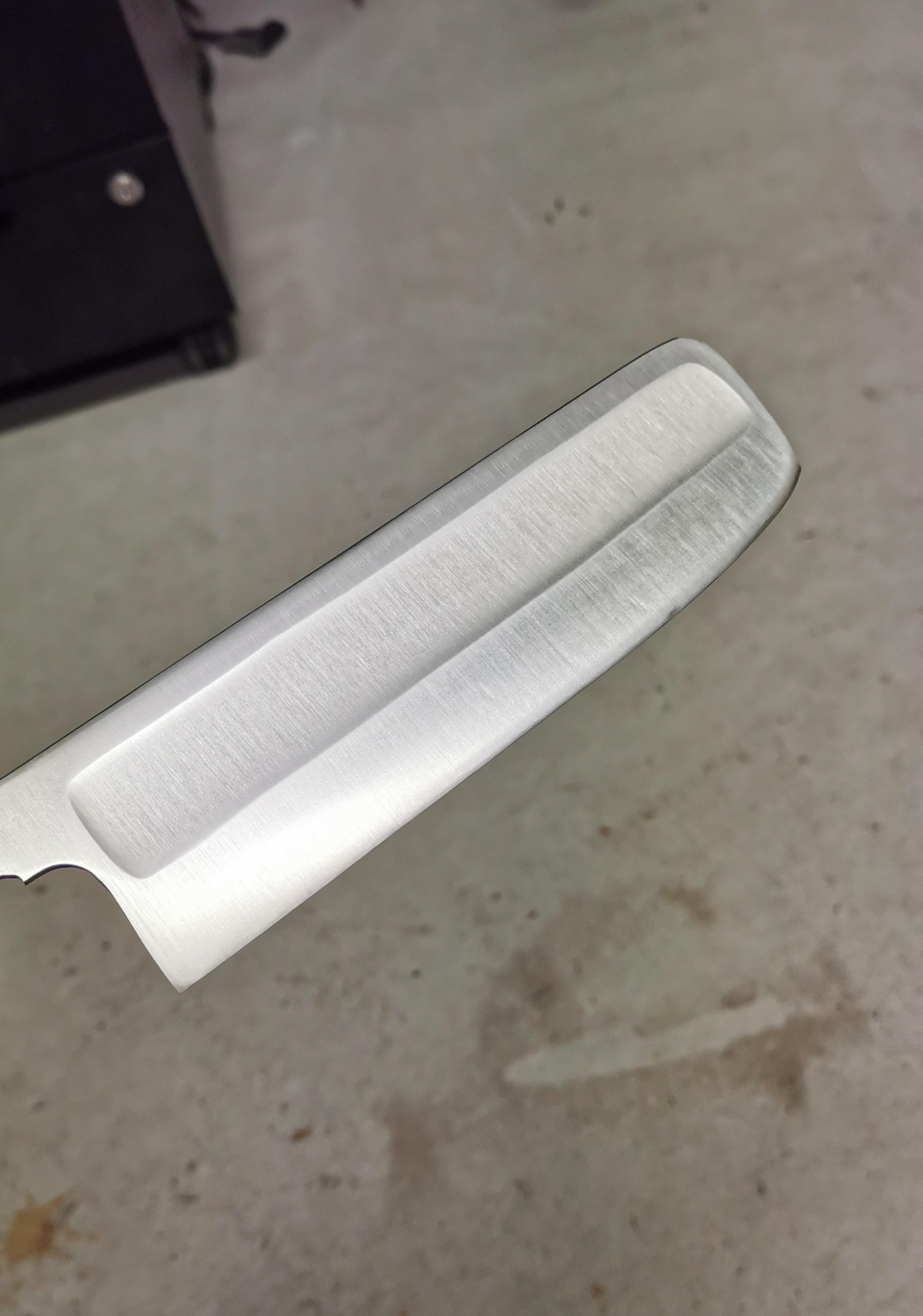 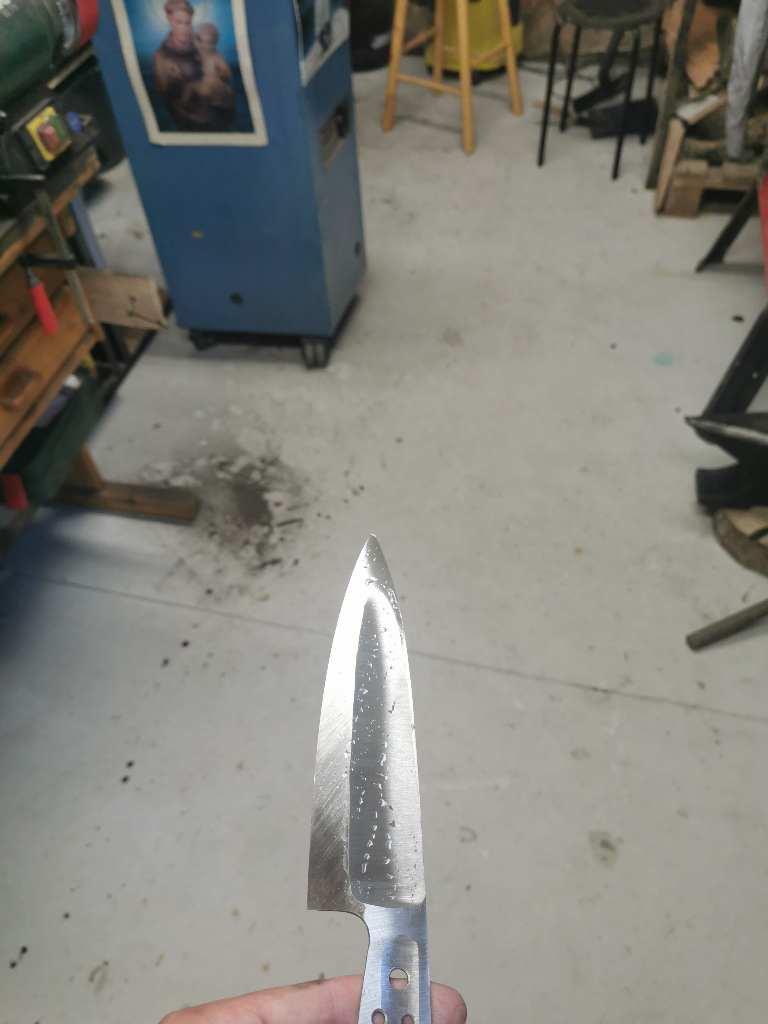 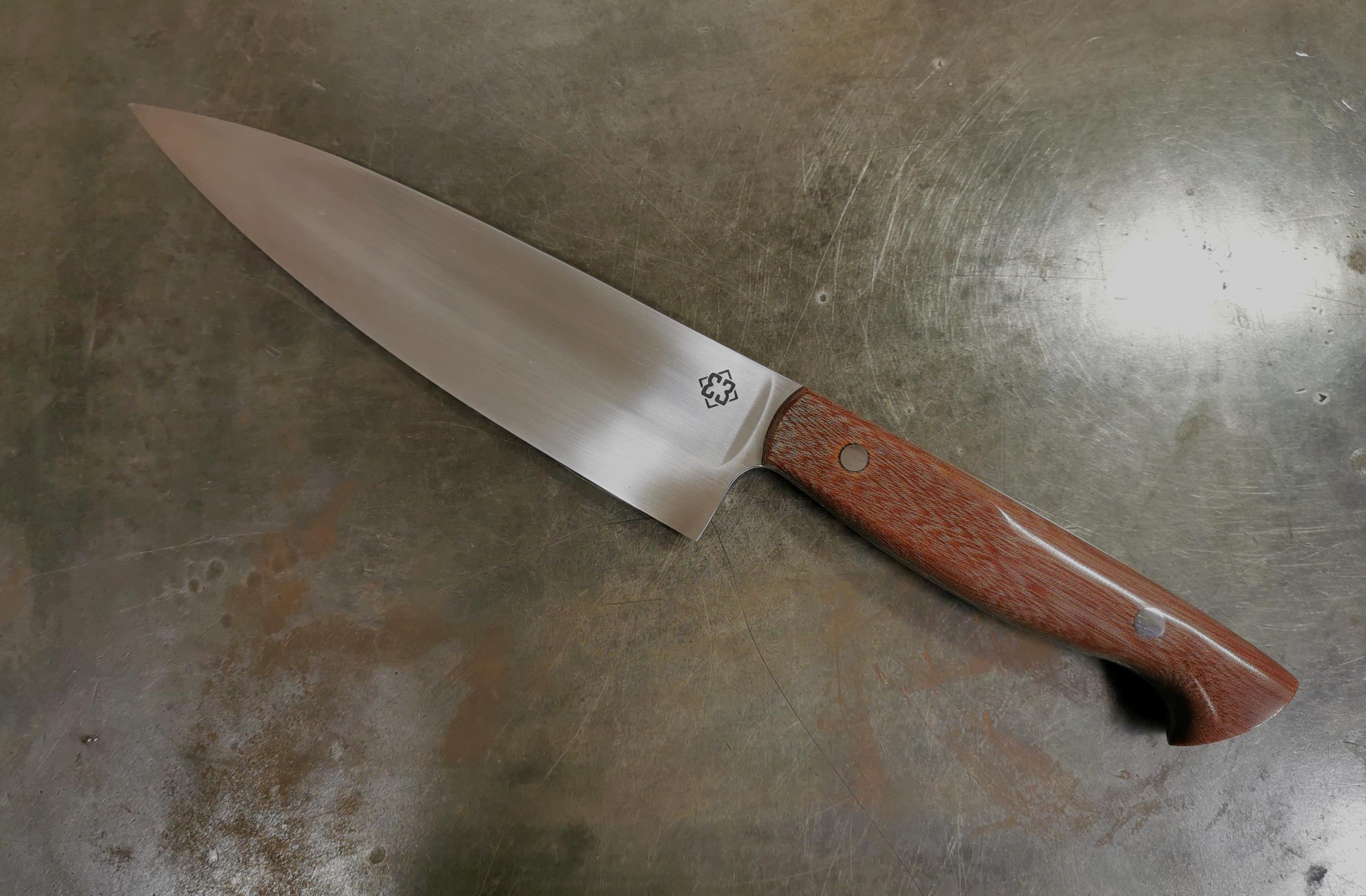 This is 10" wheel on a 2 and 2.5mm stock. For simplicity I went in line with spine, but I would try to follow the edge next time. Also I made as 36“ platen I haven't tried yet.
T

I have only done a couple. I tried doing the hollow first and then ground the remainder of the blade, but didn't like it since I usually had to regrind the hollow again, so I am going to try grinding the blade and then the hollow on the next one. I am using a 36" radius platen, so it's a very shallow hollow and I blend the lines so it's harder to see and not as obvious to the eye until a straight edge is used. I try to have the bottom 1/3 of the blade or so convexed and then start the hollow after that. Got a True Tilt table for my belt sander, so that may be easier to keep the grind lines crisper with the radius platen?

My first one, I reground it a couple times and went pretty thin behind the edge, too. It is 52100 that started off around 3/32" thick at the spine: 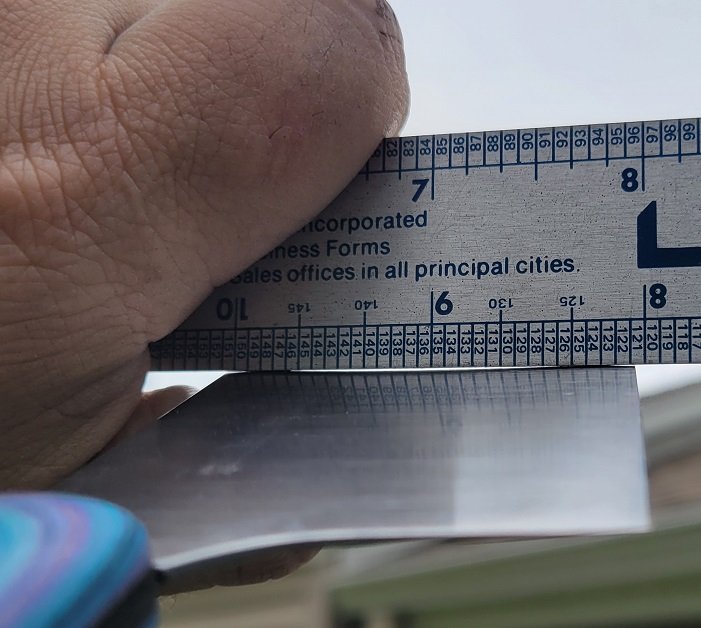 Same blade; I start the hollow after the end of the blade so it's not as starkly visible:

2nd blade I did, hollow starts higher up the blade, isn't quite as deep, but is a little more visible from the choil: 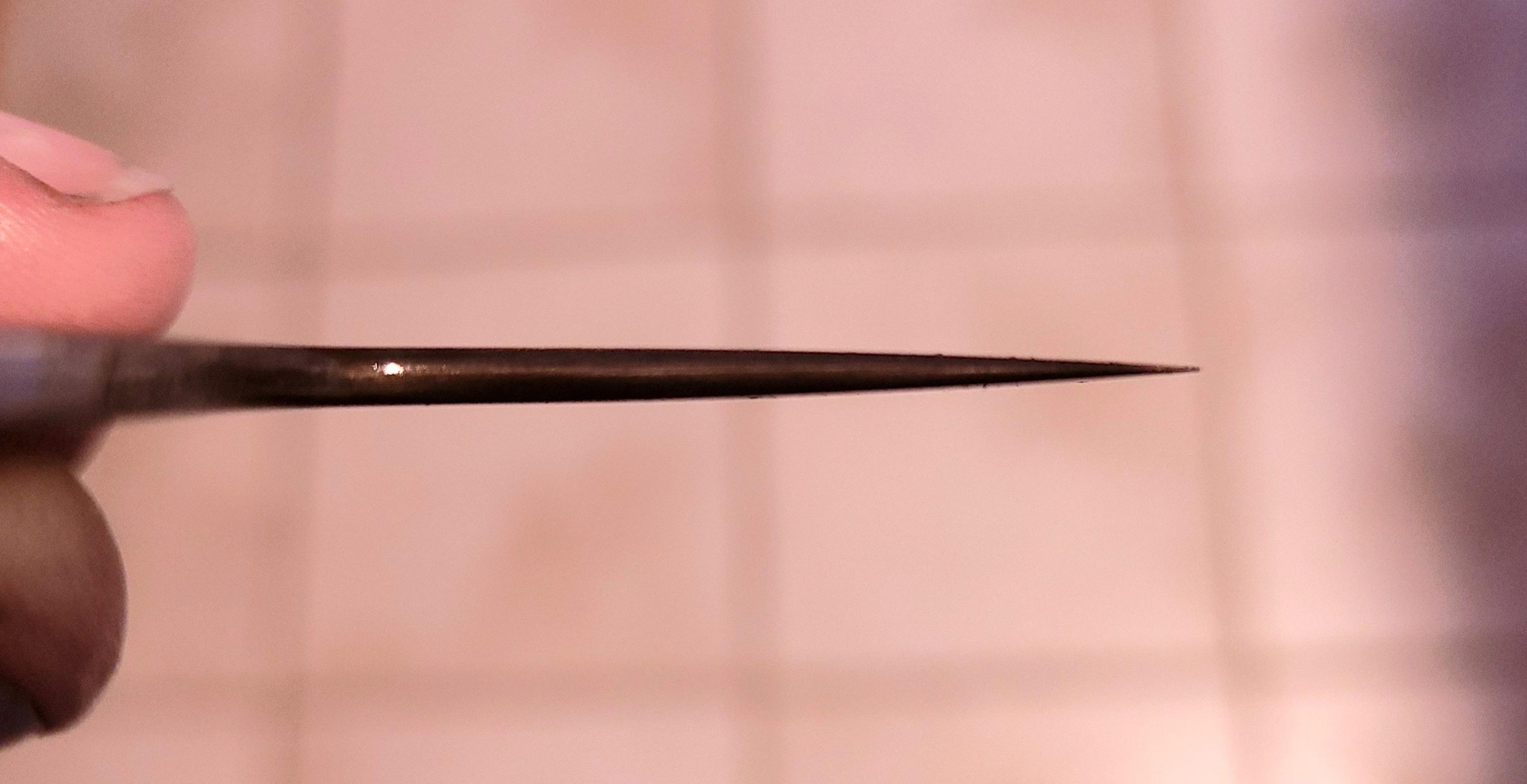 But it's a damascus blade, so you can see the convexing and blade road and where the hollow is above that: 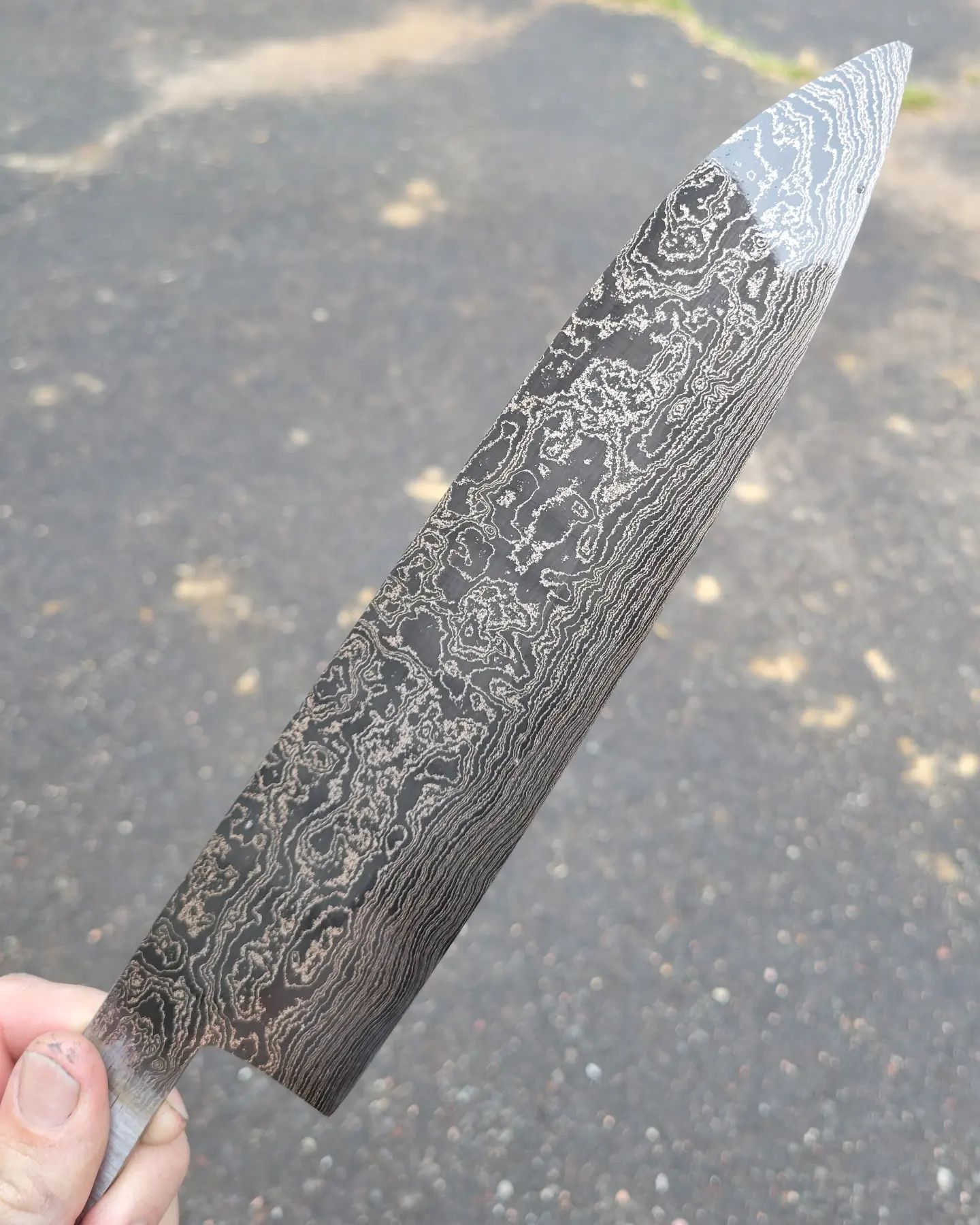 This grind worked pretty well, but I want to thin the tip area out a bit more and then behind the edge a hair more. It is more of a workhorse type knife with more heft to it, so it has more meat behind the edge (more convexing) and the hollow starts up higher and goes to the spine where the other one ended a good bit before hitting the spine.

My culinary knives are too thin for an S-grind, distal tapered starting from .060" stock usually.

Do you chaps who do them actually see any major food release gain?

I experimented with gratons and kullens years back and didn't see that much difference on thin blades.
T

I did notice a bit less sticktion on the sides of the blade on the 2 I did so far. It is also nice to help reduce the weight so you can use thicker stock/more convexing, but still have it lighter weightwise.
B

This is a choil shot from a takeda 240 gyuto. If you haven't seen one before, definitely Google it, they're interesting knives.

I don't own this knife, but I know someone that does who took this picture. He sent it because I've been wondering why everyone seems to love using these knives so much, and I've also been interested in reproducing it (hopefully with modifications for the better). They're interesting gyutos like I said. They are zero ground, going up to that wide bit, then with a very shallow hollow (the hollow is forged in btw). The blade is very tall, which makes the wonderful to use in the kitchen, and allows for that very gradual hollow.

I just wanted to show a little bit of a different take on the s grind, and at the risk of having someone better and more talented taking my idea of modifying the takeda design for the better, I thought it would be better for me to just post it here.

Edit: you will also notice the asymmetry, this is common for japanese blades.
T

That is a very typical Takeda grind. Many Japanese kitchen knives have very shallow hollow grinds on them due to grinding on large, wide water wheels. Some like Takeda forge the hollows in, some are ground in. Some are forged in and then cleaned up during grinding. The big wheels are around 3' or so in diameter and a few inches wide. Many of the Japanese knives I have played with are either convexed or they have the shallow hollow, but you don't visibly see the hollow all of the time on many of the knives. The drastic S grind, J hook grind, B grind, etc are newer US/UK mostly versions seeking to improve on the Japanese method and often have a distinct bevel line to show off the hollow. The well beloved Konosuke Fujiyama series of knives are actually hollow on the blade road as are many of the wide bevel Japanese knives out there. A buddy sent me 2 Kono Fujiyama to thin out and I found out they have a very slight hollow on the blade road as well as above it as well on the sides of the blade. My Kurosaki has a slight hollow above the shinogi line, but it's not visible from the choil and without a straight edge, you wouldn't notice the hollow.

Y'all are getting my wheels turning! And Thank you!
I figured the answers would be varied.
I think at this point, the best thing for me to do is make a/a couple quick and somewhat dirty blade(s) and do some testing of my own.
If anybody else has something to put in, I'm all ears!!
R

Just take some scrap pieces and try it out. Salem straubs video on youtube is indeed very helpfull.
I started making radius platens and i make sgrinds with help of the toolrest. I use that as a guide and make sure you use good lighting. And also like salem straub you have to hang over the knife so you can see what you are doing.

This is the knife i just grinded:

Stacy E. Apelt - Bladesmith said:
My culinary knives are too thin for an S-grind, distal tapered starting from .060" stock usually.

Do you chaps who do them actually see any major food release gain?

I experimented with gratons and kullens years back and didn't see that much difference on thin blades.
Click to expand...

I would say that you could note the difference in terms of how the knifes cuts and releases if you compared it to a same profile with same grind without hollow and same TBE. Thin stocks will ofcourse cut better but nakiris really do make the food stick to them. In chef knifes I dont really mind or notice is as much as I work a lot with the tip third of the knife and since the blade is narrower there the food will drop off as it passes the spine.
R

Just posted on insta a video on foodrelease between the sgrind and full flat grind: