Shopping for a Kukri, but wanting a Guard has made it difficult

Picked up my first Kukri style blade, just a cheap Cold Steel Kukri Plus machete, and after a few cuts, I'm afraid theirs no going back for me. I love this style of blade and would like to spend $200 to $500 and get a decent "real" Kukri.

Problem is, and this just being my personal opinion, I do not like the idea of their being no guard on Kukri's. Plus, in that past having your own fingers ride up on a blade during thrust kind of lingers with you, and having that guard is a nice peace of mind. Shopping around, it's been difficult finding one that first the bill.

(a.) Cold Steel Gurkha Kukri Plus, the Real kukri, is well over $600 with tax at the lowest reseller. It's just too much, that $500 I quoted is max limit.

(b.) Kukri House has a few versions, but reading around it appears they can be pretty hit and miss on QA and such.

(c.) Himalayan Imports has nothing with a Guard.

(d) Becker BK21 is appealing, it's cheap and tough, and it doesn't have a guard, but the handle design allows for less chance of riding up than many of the smooth, round type guards you see on most traditional style Kukri's. Negative's, I don't like the thinness of the blade.

If anyone has recommendations of any Kukri's with a guard that would fit the bill, I would appreciate it.
J

Busse Killa Zilla. Not my picture

My impression is that

Kailash Blades will build you anything you want. And they will do it really good with nice tempered 5160 springsteel for all the thoughness you'll ever need.

Simply contact the guy and tell him what you want and he will cooperate for sure. A guard will be no problem for his smiths. 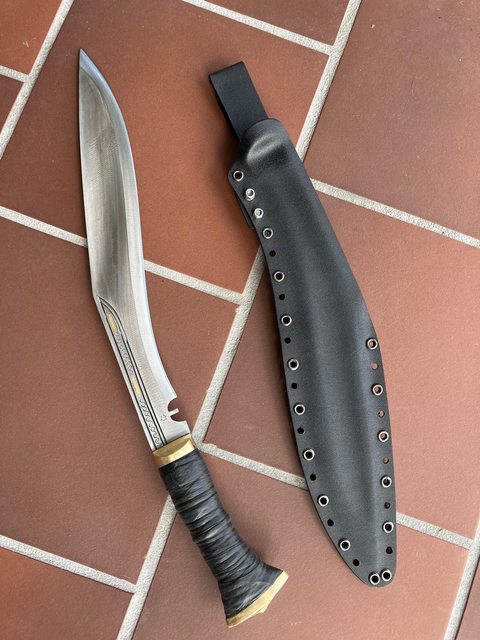 It doesn't help that the traditional kukri doesn't have a guard (since it's designed for chopping, not stabbing).

TOPS A-Klub and Tundra Trekker are kukri-esque designs, but definitely not traditional. They're plenty beefy. 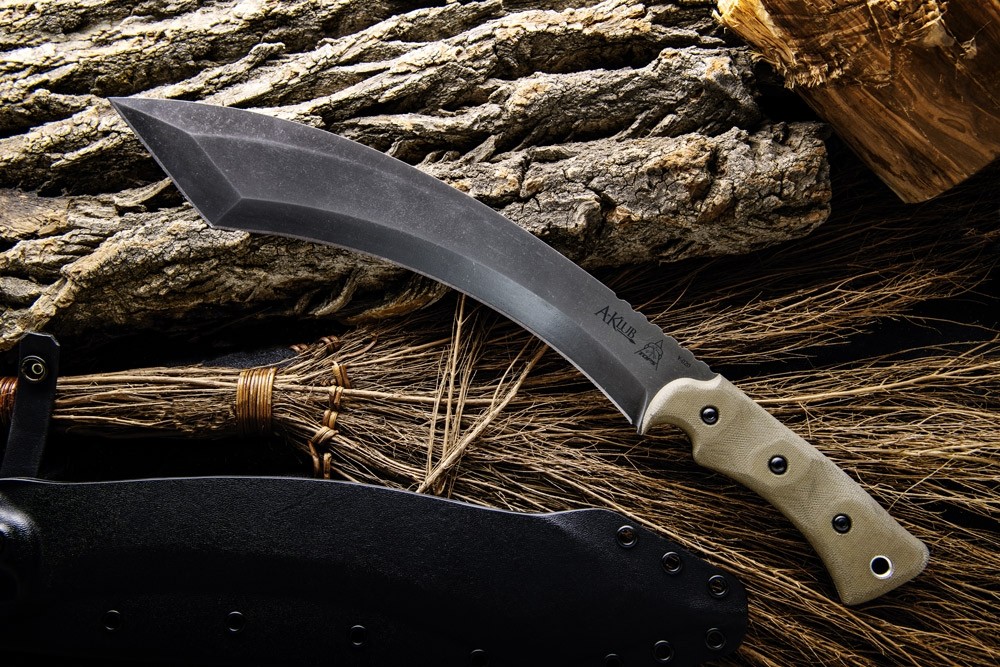 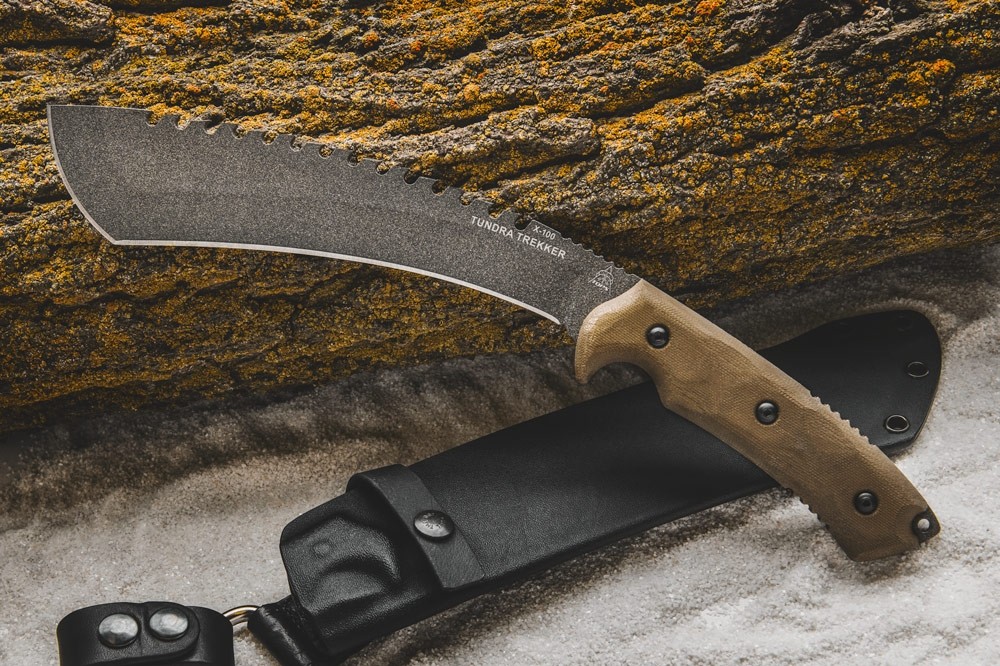 Not sure why you want a guard, but a custom maker should be able to whip out one with a guard if you're so inclined.

A khuk is not a stabbing weapon, the entire design of the blade basically makes it super choppy/slashy. If you want to stab, get a knife where the point is in line with your fist when wrapped around the blade's handle.
D

Appreciate the advice everyone.

I think JustJed nailed it in the first post. Kailash Scourge looks to be exactly what I'm looking for. Not sure how Kailash flew under my radar but glad to have found them. Everything looks very impressive.
J

I should point out that the Becker BK-21 is actually designed as a fighting kukri. Hank Reinhardt was a noted medieval weapons specialist, particularly swords and their use.

That's not to say that the BK-21 isn't a good general purpose kukri, but it was designed with its weapon capability foremost in mind. The thinner blade stock improves handling
and speed. It's similar in this regard to a tomahawk, as compared to an axe.
D

The lower price point on the Becker is tempting, and having a BK9, I know it's quality steel. The Scourge with it's sharpened backside edge, more pronounced guard, and IMO better looks makes it appealing.

They're both good knives, just in different ways. Personally, I'd go with the Scourge. I'm seriously considering it myself. That, or the Regent Long Knife. Something about the idea of a tactical chef's knife just does it for me...

I plan to get a Kailash someday too - looks like a great company - post pics if you get one...
D

They’re also very accommodating with custom designs. If you see one of their kukris that you connect with but doesn’t have a guard, I’m sure they can help you out.

And the two khuks I got from Kailash have excellent craftsmanship.
D

Here’s mine, the Ek Chirra: 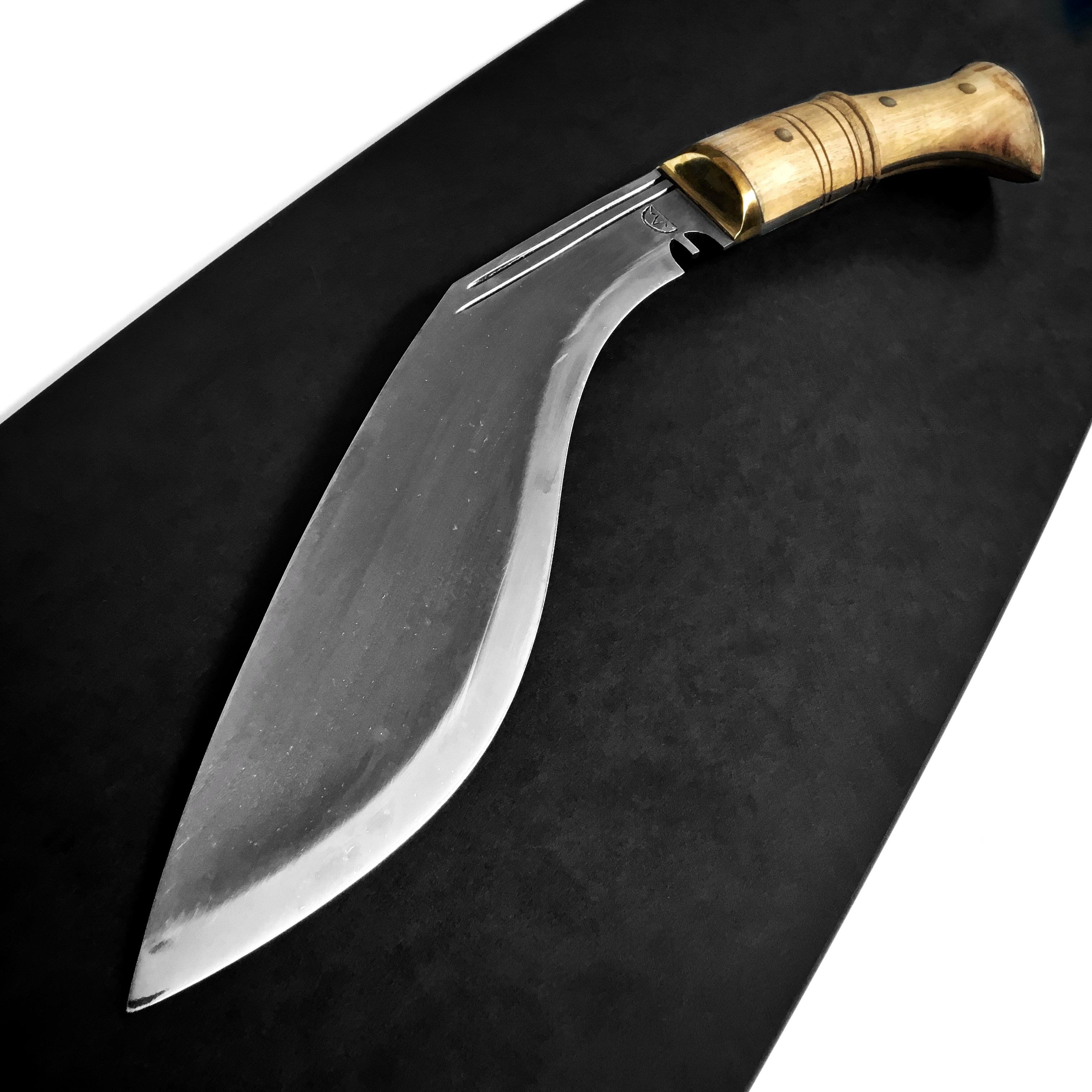 And this one’s my Father’s, the Panawal: 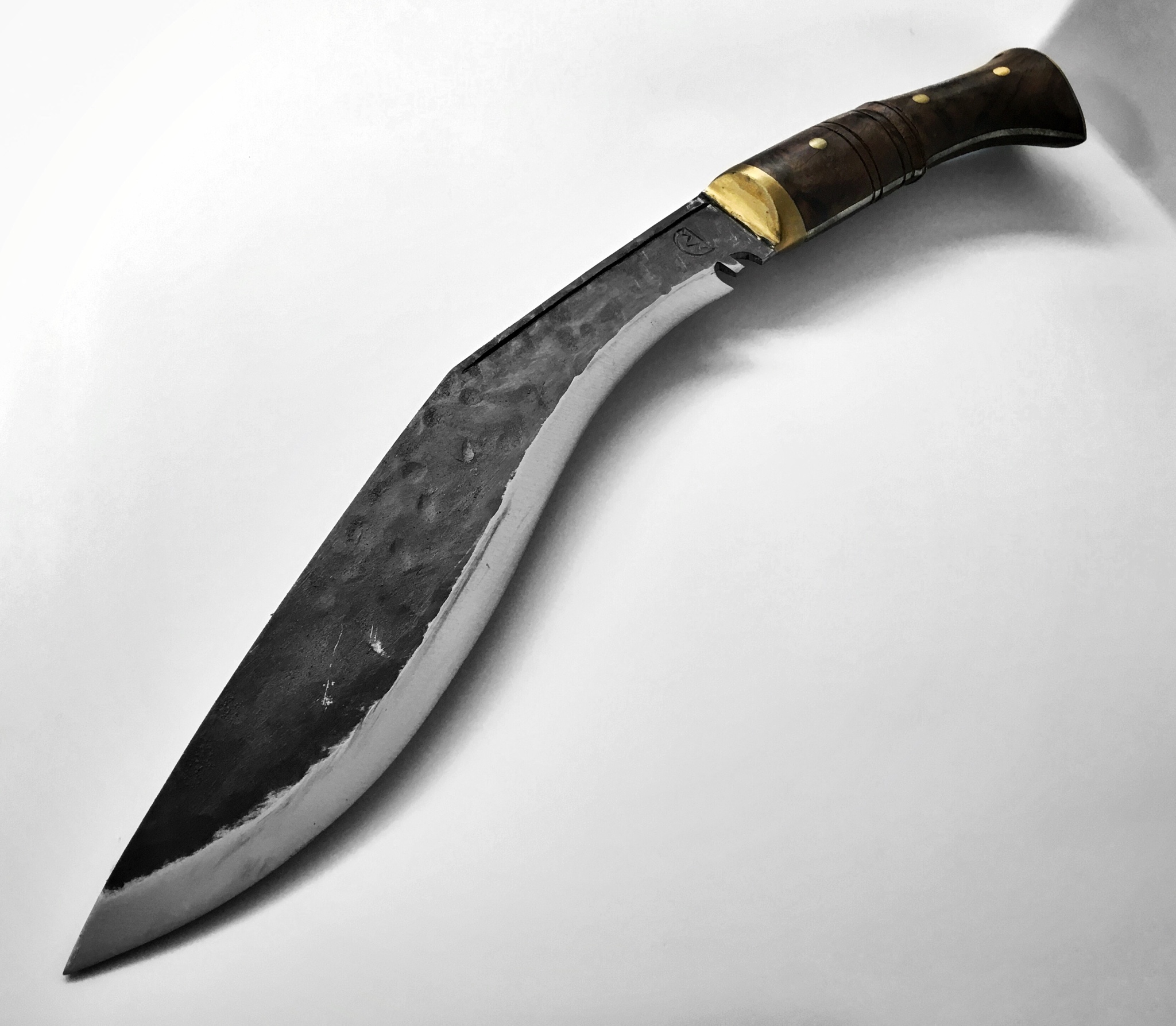 Both of those beauties are full tang.

This kukri was from the Khukuri House, and in terms of fit and finish, it’s not quite on the same level as the previous two. However, it’s my first true kukri from Nepal and it’s quite special to me. 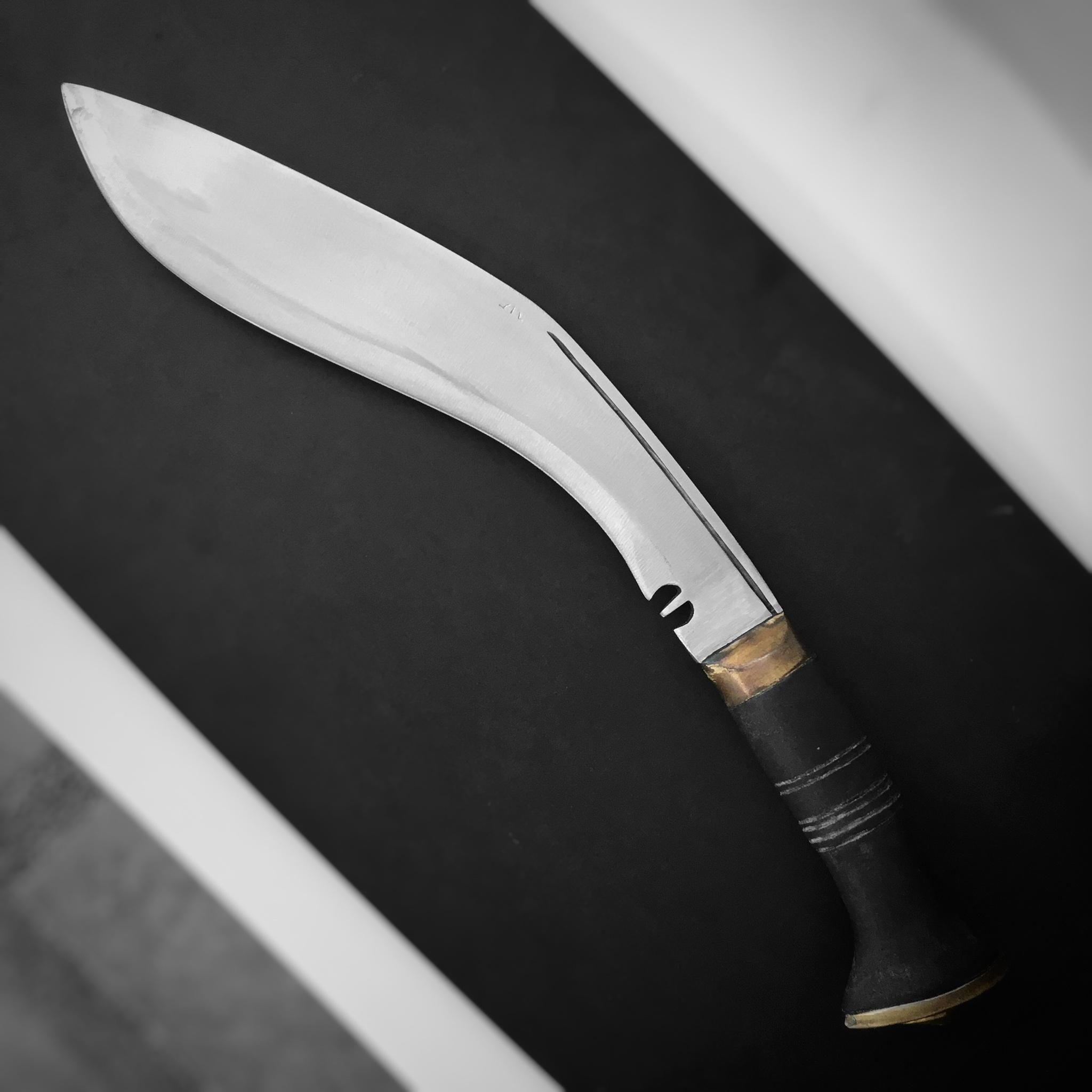 353 said:
My impression is that

Kailash Blades will build you anything you want. And they will do it really good with nice tempered 5160 springsteel for all the thoughness you'll ever need.

Simply contact the guy and tell him what you want and he will cooperate for sure. A guard will be no problem for his smiths.

Hell yeah, lol. A guard’s like a regular Tuesday for them.

Not that I need any additional competition for these fine blades, but HI has a model with a guard, the Suga Knife, and one was listed on the 8th.
J

It all comes down to one question: Do you want to buy an off-the-shelf item, or have one custom made? It really is that simple.

justjed said:
It all comes down to one question: Do you want to buy an off-the-shelf item, or have one custom made? It really is that simple.

A big part of me says the same thing. With the micarta scales and the $41 shipping fee its $290. The Becker can be had for $135 shipped, and you made the good point about it's speed and agility advantage. This is a defensive blade purchase after all.

Less than half the price is very tempting. But it doesn't have the character and wow factor like the scourge has.

In that case go browse the Kailash site and order exactly what you want, the way you want it. BK21 seems like a good tool but if you want "real" it won't satisfy.

Thanks to everyone who suggested us!
The scourge definitely ticks the bill for a guarded khukuri with wow factor- I'd suggest the anniversary if you're wanting to prioritise practicality in outdoors tasks.
Another thing worth keeping in mind is going for a traditional khukuri and adding a guard to it- there's a few advantages to it.
1- it'll come in a touch cheaper than the scourge in all likelihood.
2- you'll be able to experience a more traditional and authentic khukuri balance.
3- if you choose a blade with a bit of history behind it that can add cool factor too.
Here's an example of a standard plate guard we've done and can easily add to any traditional blade.
https://bushcraftusa.com/forum/thre...h-kukri-its-here-final-in-hand-photos.268835/
If you let me know a little more about the kind of work you're wanting to do with the blade I'm sure I can help suggest a model to go with as well.
Take care,
Andrew and the team at kailash.
D

DayofReckoning said:
(a.) Cold Steel Gurkha Kukri Plus, the Real kukri, is well over $600 with tax at the lowest reseller. It's just too much
Click to expand...

I suspect those ridiculous prices on Cold Steel's new CPM 3V Kuks and Bowies will eventually have to come down significantly . Way too high for what they are , IMO , and I'm a long time fan .

I have an older Gurkha Kukri Plus in O1 , that's plenty tough for anything short of chopping concrete or metal . It didn't cost anywhere near $600.