Spyderco featured on the History channel?

There's a show on the History channel, called "Alone," about 10 men (well, on season 1, anyway, they were all men) who are left on the edge of British Columbia, each man several miles from any of the other men. The distance, physical barriers, and circumstances force each man to fend for himself, and the last man that is left will win $500,000. Each man can tap out at any time and get rescued, by using his satellite phone, and none of the men is told how many people are left at any given moment -- until the last guy is visited by the rescue crew who tell him that he's the last guy left, at which point he packs up and goes home with them.

Aaaaaaanyway, the end of the last episode is dramatic, with many voice-overs from the winner, Alan. But what I found really interesting is that in the very final minutes of that very final episode, he's cutting mushrooms in his backyard with his kids, and, the camera shows it very quickly so I can't be positive, but it appears that he's EDCing a PM2! Go check out the last few minutes of the very last episode of Season 1 of "Alone," and see for yourself. (His knife of choice for surviving in B.C. was a kukri, by the way; each contestant was, besides clothing and camera gear, only allowed to select 10 items.)
D

Sharperthansticks said:
(His knife of choice for surviving in B.C. was a kukri, by the way
Click to expand...

Yep, he was carrying a Condor. They've since released an updated version of their jukri which is named after him or with his involvement or something like that.
D

There are a couple big Alone threads in the outdoors area. But all the gear lists are just of what they used in the show. I don't think there's a rolling list of their regualr EDC.

I remember catching that too. I thought it was an Endura for some reason, but it's been awhile so I have no idea now. Cool either way. PM2 is my EDC most days.
S

jstn said:
I remember catching that too. I thought it was an Endura for some reason, but it's been awhile so I have no idea now. Cool either way. PM2 is my EDC most days.
Click to expand...

It may have been an Endura; I just watched it again, and it's hard for me to tell while the knife is moving and/or is far away from the camera. By the way, for others reading, the footage is at the end of the 10th episode, not the 11th.
C 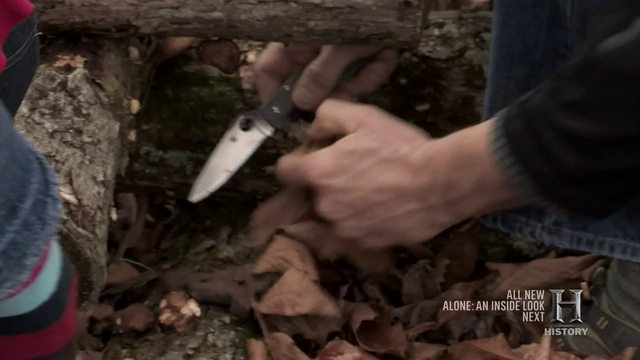 In the original Man V Food, on at least a couple episodes, Adam Richman pulled out what looked like a DLC-coated PM1 (original PM). In one instance, I think he used it to pry open a clam or something.