Let me start by saying that this is not meant to run down any of these brands, in fact each of these knives has strong points. Likewise, the one's I've been using most are the least expensive, so I feel they all have enough merit that I'm keeping them around.

What I set out to do was point out some of the little refinements that make the GEC a nicer knife. Material, fit, & finish show in the details.

The GEC I pulled out was the first I found, and frankly I didn't want to dig any further for one of the ones with synthetic scales. It is a more expensive knife, but the issues I'm hoping to point out do not necessarily have to do with the material in this instance. The Rough Rider is one I picked up in a trade on this site a few months back. The IXL is a purchase from a couple months ago, mainly due to the pattern and very low price. 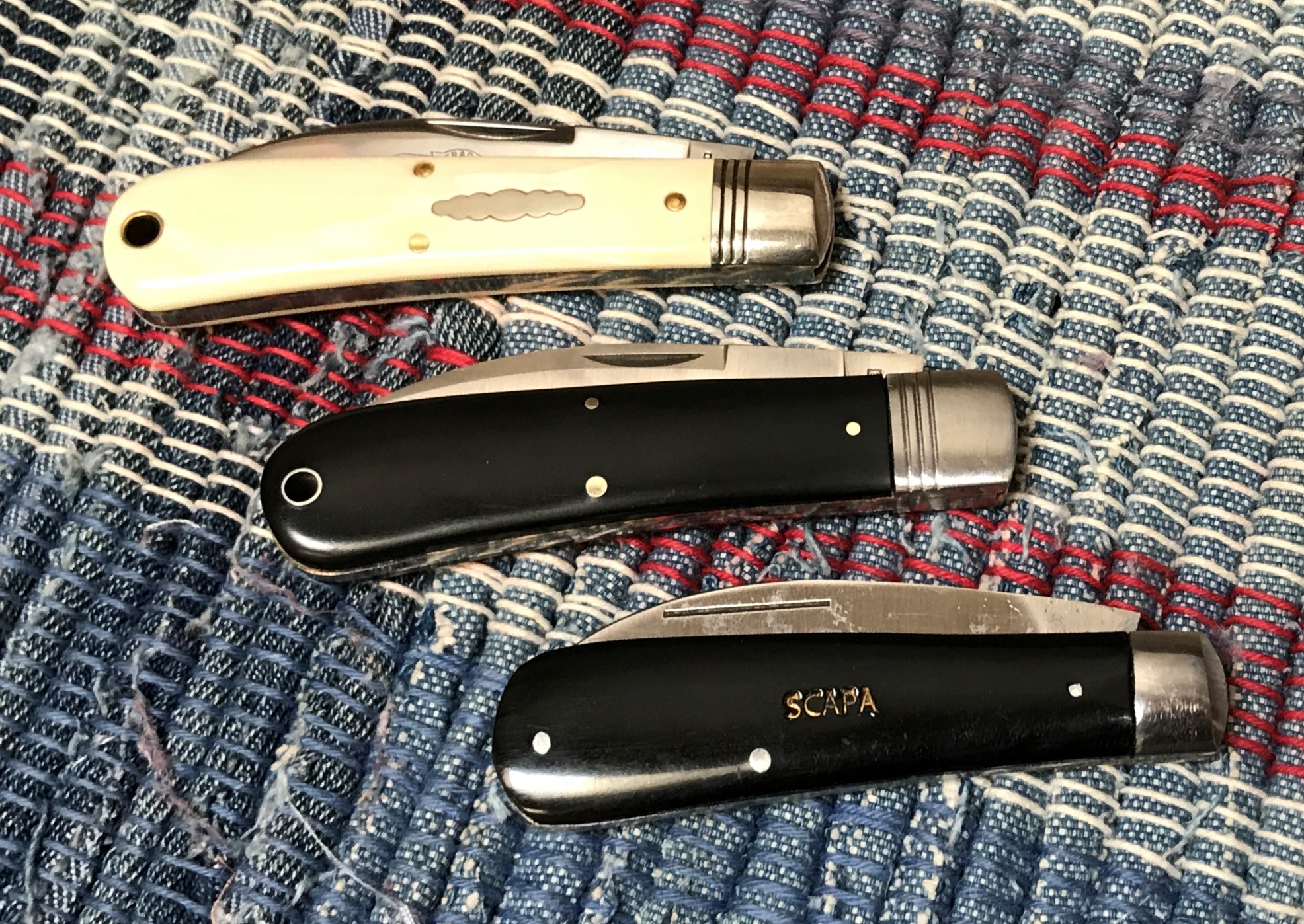 A quick look at both the RR & IXL shows a gap at the point where the scales meet the bolster. Since this is a man made material I'm pretty sure this is due more to the fitting than any shrinkage. It's a shame, especially since the RR is of very recent manufacture. Modern machine tolerances should have eliminated this gap if done right. Frankly, this is something a little attention in manufacture could eliminate. 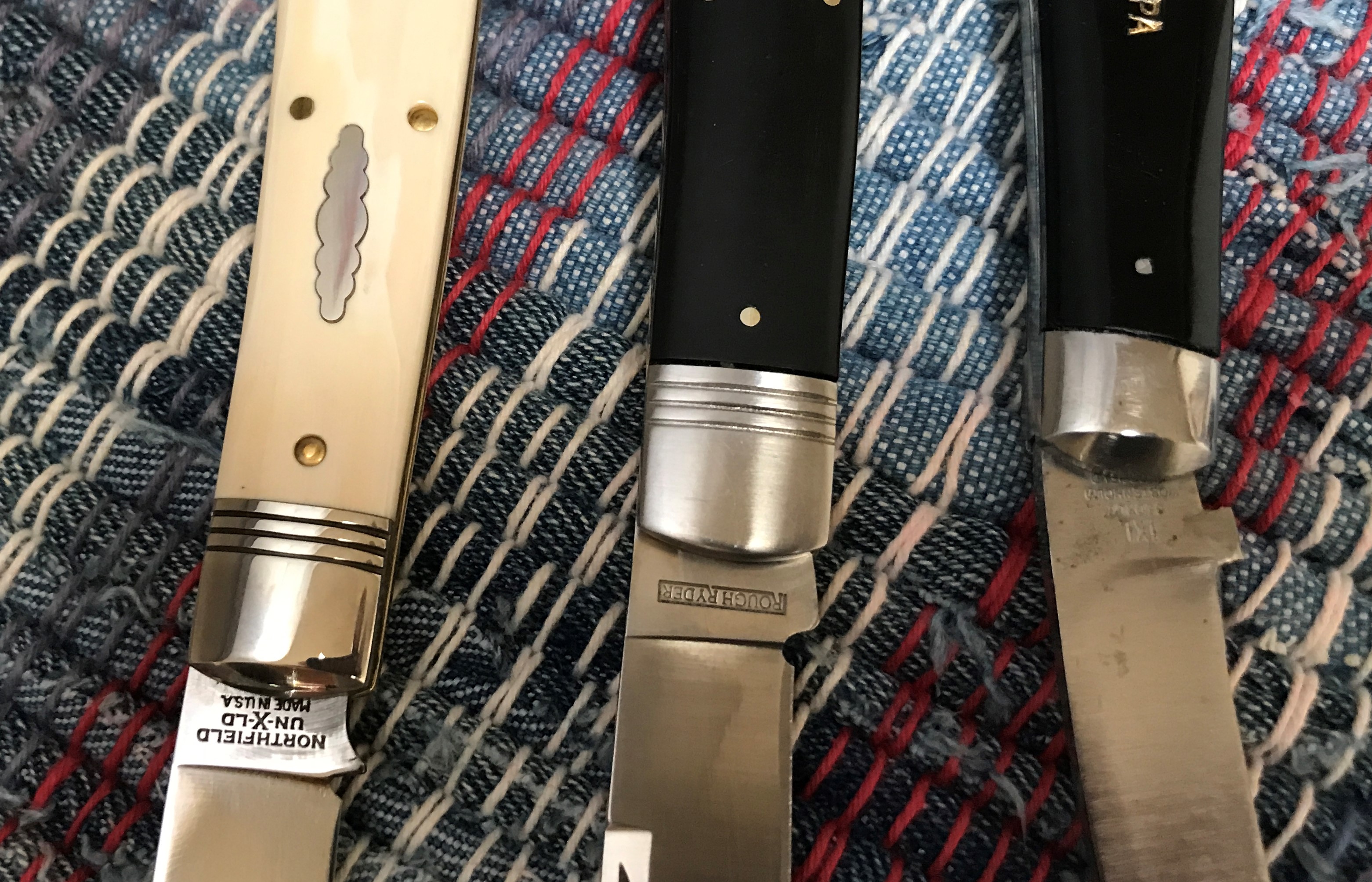 Looking at the bolsters also shows the lack of finish in the RR. A close look at the threading (those three slots) shows how rough those cuts are, with obviously dull cutters having been used for these cuts. The GEC looks much better with no debris in the valleys and a smooth polish. But look how the IXL and GEC have also slightly tapered the front of the bolster to make the knife a little smoother in the pocket.

Now this is just a guess, but I'm willing to be that the RR pieces are all assembled with minimal finish afterwards. If you look at the rear you can see the spring, liner, and scales all have basically the same shape and fit fairly close, but any final grinding or polishing to make all the pieces match was focused on the bolster end. Both of the other knifes show more attention paid to this. 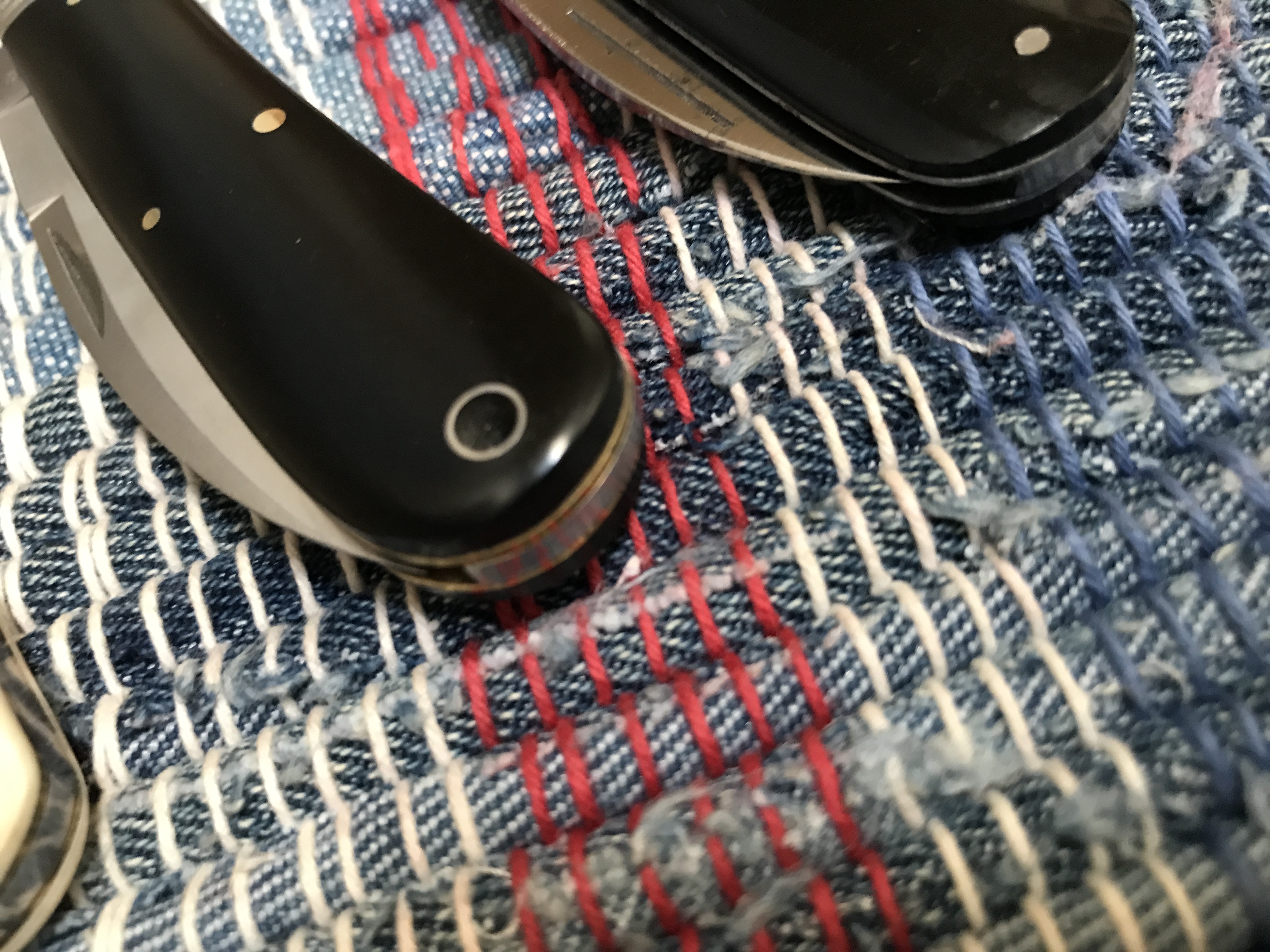 Once open and side by side it's pretty clear the RR used the GEC as it's pattern. Flattery of a sort. I do prefer the lines of these knives over that of the IXL, mainly due to the smooth line of the "S" curve along the spine. The "dropped" blade of the IXL is nowhere as clean a look. 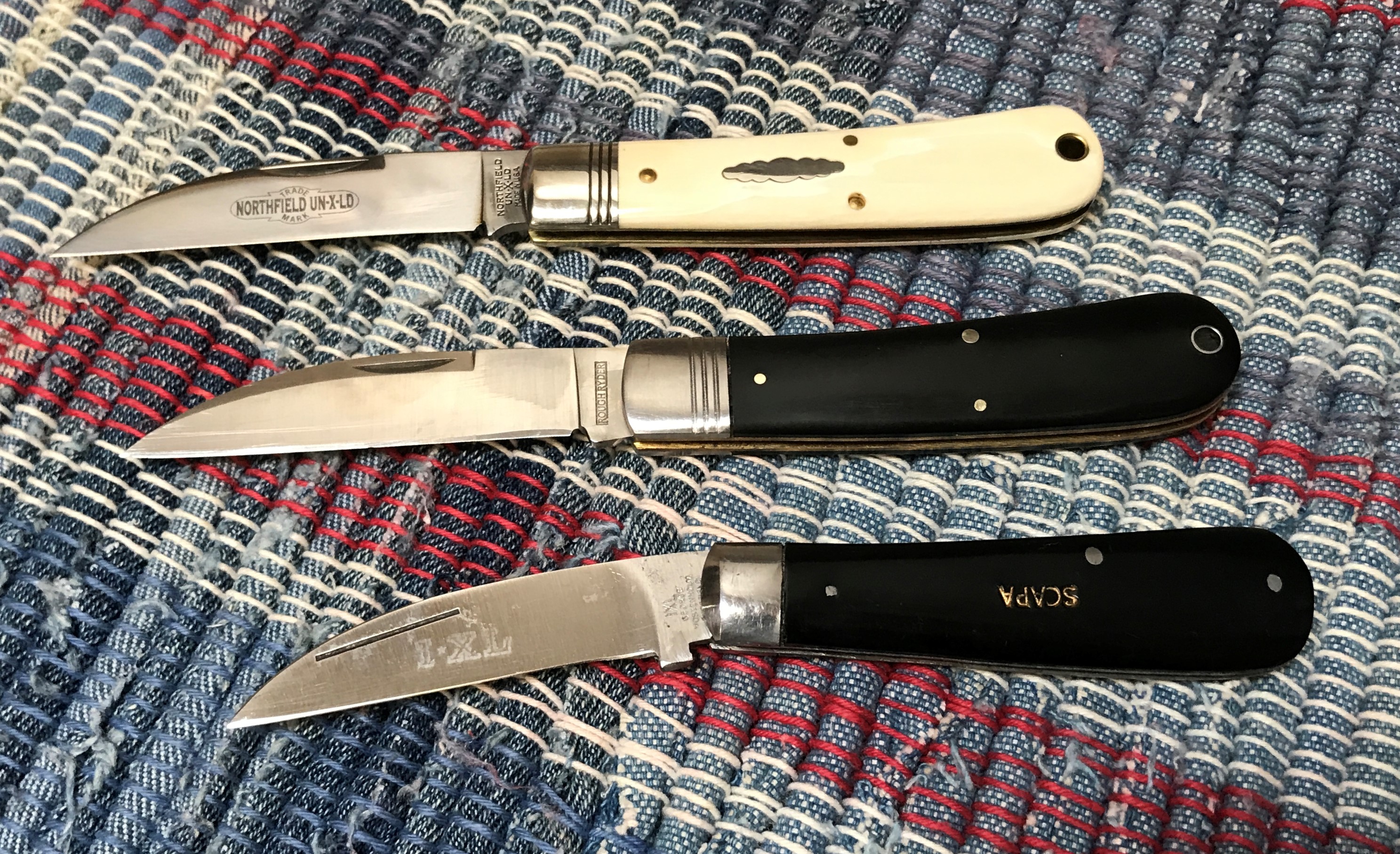 The very light etching and unattractive nail nock on the IXL don't help. I think the etching could have been better done on a blade with a better finish, but of the three, the IXL has the crudest grind and finish. The RR has a very good grind and excellent clean lines on the swage. If anything the rounding on the GEC from polishing is less crisp. 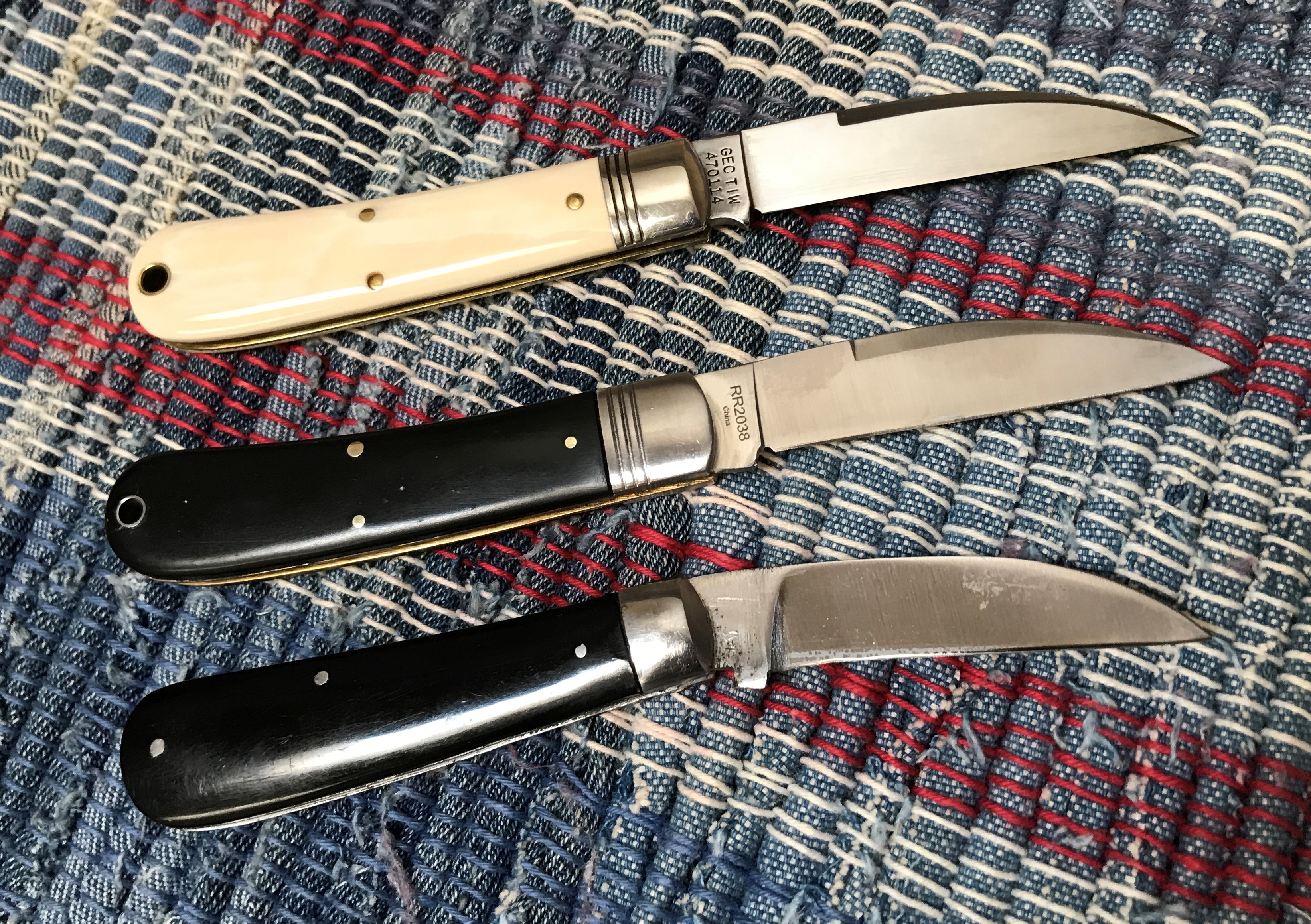 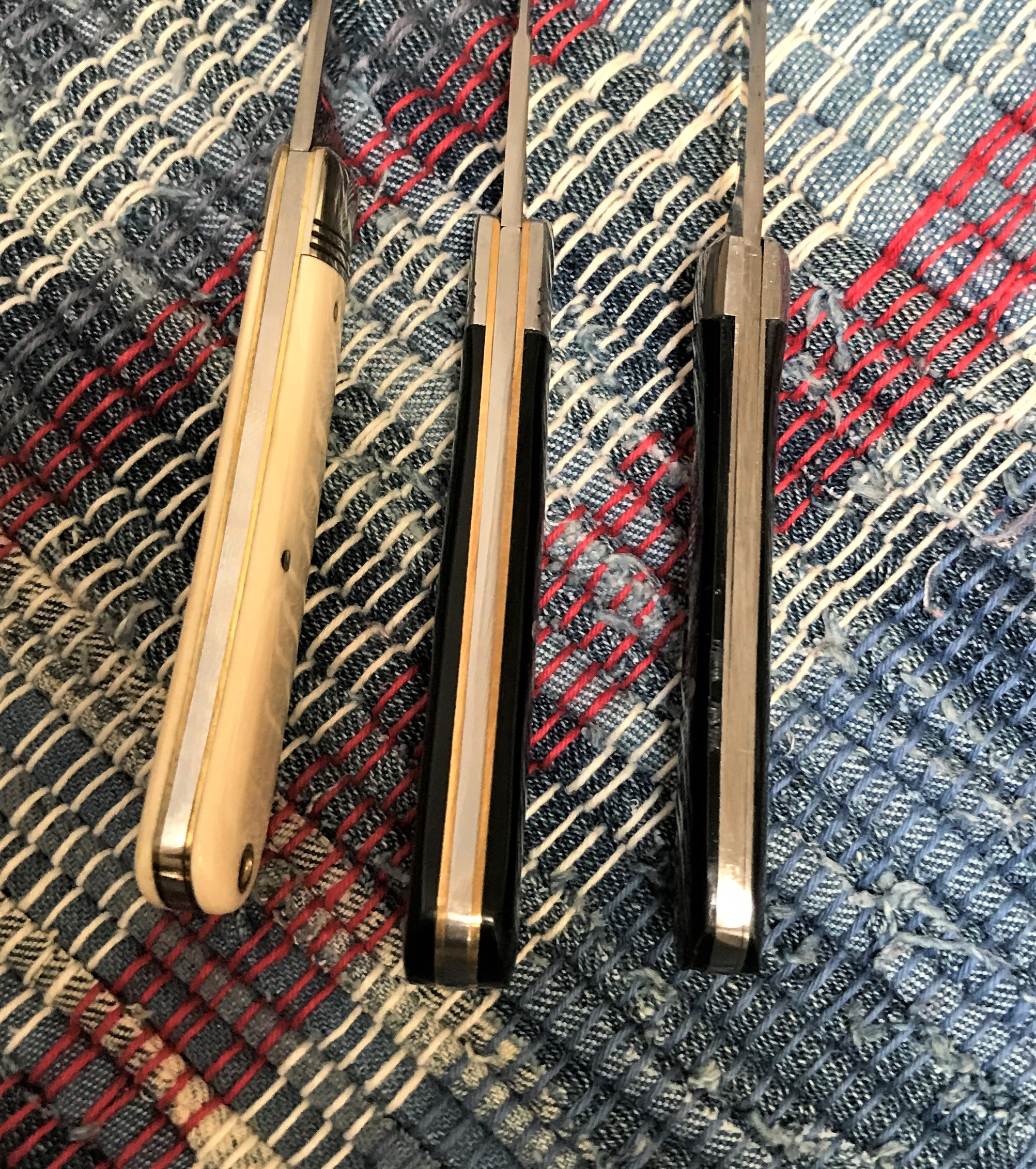 The RR does have better fit on the backspring when open than the IXL does. It also has the best walk and talk. The pull is good, clean, and the half stop is positive. It's a shade better than that on the GEC.

The IXL is the smallest and slimmest. I wonder if this was a souvenir; Scapa is a major port in the north.

All in all some interesting similarities and differences. The GEC is back in the tube and put away. The RR is back out on the workbench where it's going to get some of it's issues "fixed" and I'll keep using it. The IXL sits on the desk with about a dozen associates and mainly gets used for opening the mail. Good knives all in their own ways. I learned a couple things just putting them together on the same table.

I don't know that I'm going to make any converts one way or the other with this post, but I think those who have recommended anyone interested start with RR have something. At 5x the cost that's a big step up to GEC. I know when I was a teenager I couldn't have done it. Uncle Henry was top of my budget back then.

Surprised the RR has such a large bolster/cover gap. None of my 60 or so have that.
Nice wright up and comparisons.
S

A nice and valuable post mate. I love comparative stuff like this, really helpful for those who are looking to make a new purchase but most especially (given the brands represented) for people new to the hobby
C

Thanks for the great write up! I’d love to see a comparison like this with GEC, Case, and RR Barlow’s.

I admire this review, measured, analytical and not biased. First rate attempt to assess similar but different interpretations of the pattern.

For me, given the cost , the GEC would be even more desirable if it had NS or steel liners, as it is it is king of the 'collectibles' I'm not a fan of those sunk pins though. The RR shows ruggedness but built and perhaps copied...to a price, irritations in the finish despite the automated assembly but likely a credible worker. The IXL displays something that I baulk at and that's extreme cant, look how that blade droops down from the spring- may be intentional but for me it smacks of crude build- rather typical on English knives.

It will be interesting to see how the forthcoming Forum Knife 20 from Viper ranks against these? I'm hoping it takes home the laurels.

Very nicely done. Good comparisons. I've never owned the GEC or IXL, but I have a couple of the RR's. When I run out of other things to do, I'm going to play with one of them... perhaps even do a re-cover.. I will for sure smooth up the sharp areas around the lanyard tube.

Excellent comparison write up for someone looking to purchase a swayback. Personally I wouldn’t purchase a low end swayback like RR or IXL but would purchase GEC at dealer price not aftermarket. I prefer to carry my Northwoods Signal Jack because it’s different and larger and I also like the CK/ Viper swayback on the smaller side. Again very nice write up and I’m sure it will help someone looking to purchase.

That took some effort.
Thanks for doing that.

Excellent write up. I've had the GEC and the RR. The GEC is a higher end knife with superior materials. The RR matches it in f&f. The two differ in one significant way. The tip of the RR is more robust and that gives me more confidence in the way I might use a wharncliffe blade. As has been said before, I'm hoping the BladeForums Viper hits the sweet spot.

I still don't believe the original RR release has black "micarta". The covers on mine have receded quite a bit, like ye olde cellulose. It also, magically, decentered it self while sitting on it's spine when not carried (which it was basically never carried).

Since I got my black one a few months ago I've carried it almost everyday. From food to whittling sticks into smaller sticks and even cutting away a piece of a blown auto tire it's held up the way it should. It's centered, very sharp, and no gaps or f&f issues.
You must log in or register to reply here.
Share:
Facebook Twitter Reddit Pinterest Tumblr WhatsApp Email Share Link
Top
Change Ad Consent Do not sell my data