Hoping you can weigh in with some thoughts. My wife has given the go-ahead to buy a disc grinder, which (at this point) I'll use for flattening scales and blades post-HT. Tru Grit has a nice 9" grinder, which comes with the table and costs close to a grand. Pheer offers a grinder-without table, for less than 700.

Is the table something ya'll use all the time, or would it be reasonable to buy the Pheer and perhaps add the table another time. I'd love to save some bucks. That said, I really like the guys at Tru Grit and am leaning in that direction. What you think?

I have the tru grit one with the table and while it's nice, I think there are better set ups out there. The arms for the table block the bottom half of the disc even when the table is removed. This prevents use of the whole disc and it also blows grit right back at you. It also prevents you from hanging the disc past the edge of the bench like a lot of makers do. I plan on removing the table/mount and finding a new way to set it all up. A swing out table would be ideal.

I dont have any disk grinder experience but i would like one. I found one made by amk tactical that looks good. Its about $700 and comes with a table. Maybe check that out too. They have a video on their site.
A

Build your own, and get the Nielson disc hub and plates. It's within your budget and the best system by far. A BF member here a while back posted plans for a DIY workrest for disc grinders too, seemed really solid and didn't get in the way like most do. Forgot where it was posted though.
T

I have a Pheer 1.5 hp disc grinder and couldn't be happier (mine is set up vertically). I change paper so often, I've never really seen the point of the Nielsen system. 3M feathering adhesive is the perfect solution for me. With a sharp knife, 9x11 paper sheets can be placed on the disk and cut to size in a couple seconds.

Where do you find the Nielsen system?

And here’s a good thread on a disk grinder build.

Where do you find the Nielsen system?
Click to expand...

I have a Pheer in either 1 or 3/4 hp (I honestly forget lol) and it works great. He uses the blue anodized discs from Tru Grit and it holds up nicely, at least he did when I got mine about 4-5 years ago, which is around when he just started offering them. I bought it also having it in mind that I would just get a work rest for it later on. I was fortunate enough to find a maker selling his mint KMG work rest set up for $200, which is less that half they charge. Its table and arms are solid steel so it's pretty heavy, so you definitely need to have the disc motor bolted of clamped down when using it. I personally find a number of uses for the work rest, mostly for squaring up scales and blocks and stainless steel for preparing to cleanly fit and layout guards. I like my work rest since I got it for a relatively good price.

The nice thing about the KMG rest is that it quickly slides off and out of the way and no brackets are in the way to use it to flatten bevels/blade flats, which is a big thing for me.

If I wasn't able to get the work rest at such a good price I would probably go this route now days and have someplace cut out these CAD parts (and maybe use a friends welder, or just use my cheap harbor freight one) to build this one designed by Kevin Powers, as it would be quite a bit less expensive than the KMG rest and it looks like a better, more versatile design IMO as well: https://www.bladeforums.com/threads/disc-grinder-sander-wip.1309537/

Here is a link to the CAD plans as well: https://drive.google.com/file/d/0B1q0edBhnQ3FUDNrRHBCZW5qbms/view


Something else to keep in mind with disc rest design is the rest hanging past the disc face on the sides, as Cris Craswford discusses in this recent video:

The one above designed by Kevin also has this feature which is nice and I could see it coming in handy. If I really personally wanted/needed this feature on my KMG rest I would just simply clamp a thin sheet of either g10 or micarta (etc.) the the top of the rest with a cut out in the middle in order slide the sides past the disc's face.


Also, fwiw, something I noticed at first was cutting the paper cleanly after sticking the 9x11" sheet to the face takes a little getting use to make sure you don't cut into the edge of the aluminum, at least it did for me, so that would be one nice thing about the Nielsen detachable discs with being able to actually lay them on the back of the paper and just use the disc and a template to cut around, but I certainly don't need it.

Anyway, in short I'm happy and content with my Pheer disc grinder as it does everything I need it to and has more than enough power, though at times it might be nice to have a slight bevel on the backside of the edge of the disc for getting into tight spots as shown in the video above, but I can always get a different disc later on if I really think I need it. For now I'm good with my set up.

~Paul
My Youtube Channel
... (Just some older videos of some older knives I've made in the past)
Last edited: Jan 6, 2019

The AMK disc and horizontal grinder are on my list.

They are the same grinder.

I ordered the disc sander from pheer because I love my pheer grinder, the drop shipped a tru grit grinder and motor to me. Its the same thing. Dont worry
M

Much thanks for the insights, folks, and the detailed answers. When the wife says "spend," I don't want to wait too long!
M

I went with Pheer and then coughed up the bucks for the very nice table from KMG folks.

So to save some bucks myself, I picked up a two used baldor 3ph/1hp motors locally. I then ordered the tru-grit disc grinder base and a extra disc ($385) and KB 24d vfd ($160) . I use the table alot for making scales and would hate to be with out it. But the horizontal disc is almost as handy. I just used some connectors going to each motor to switch between the vert or horizontal grinders. Probably less then $600 for two disc grinders. Just an idea if you can find some used motors.

I've been looking at these for awhile. Think I'll be ordering a AMT real soon.

I just purchased the pheer 1 h.p. and a KMG workrest. Thing is a tank. If you go this route call pheer after your order to make sure the right face plate is shipped on the motor to match the KMG workrest.

I bought my 1 hp motor after shopping for a good price and the mount it and VFD to a piece of 3/4 inch laminated birch and tacked it to my bench. I use the Rod Neilsen discs and paid the bucks for the KMG rest and am glad that I did. It slides in and out in a second and even has a stop at 45 degrees for tilt that I use to dovetail bolsters and scales. Larry 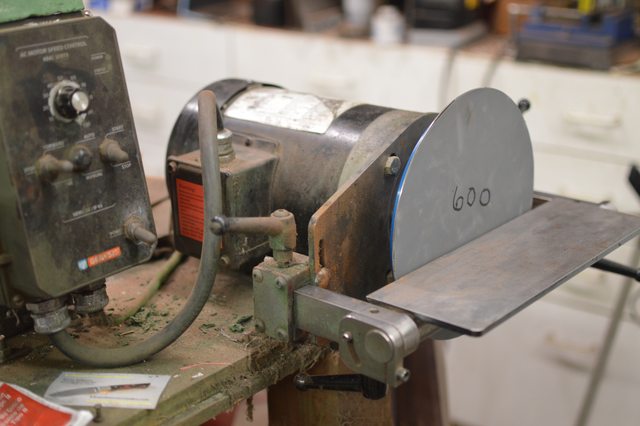 looking to buy Pheer sander and KMG work rest - do I need to buy/fabricate additional table/base for it as well? New to the disc grinder idea - any help/pictures will be very appreciated.
Thank you!

You will need to mount it to something

I converted my old variable speed horizontal disc to vertical with the addition of a Beaumont base plate and riser blocks, the workrest system, and the Nielsen Disc System. Nice tool.
D