What was it? A Buck, Frost, no name brand; What was your very first knife?

My first knife was given to me by my Grandfather when I was 5 years old, It was a small brass and wood no name slipjoint with one blade. He made sure it wasn't to sharp, and even took the point off it. I carried it for the better part of a year, to school once by accident and eventually lost it. Not a week latter I was visiting my other Grandfather and told him I lost my pocket knife, he was a case man, he went back to his bedroom and came back with a wore out case congress with black scales ( what was left of them) and blades that were sharpened to toothpicks. It was still sharper than a razor though and I gratefully accepted the knife. Not long after acquiring my "new" Case knife, I found my first knife at the edge of the woods. I still have them both, I'd take a picture of them but I'm 600 miles away at the moment! All the men in my family carried a knife of some type, but It was my Grandfathers that started my love for knives.
M

Mine was a Shrade LB7 that was one of the last ones made in the U.S. I got it for getting my Arrow of Light in Cub Scouts. Ended up giving it to a dear friend for sentimental and practical uses (she was always asking to use one of my knives to do something). I guess she ended up losing it. Made me kinda sad. It had a lot of memories attached to it. Got a Benchmade 707 Sequel when I got my Eagle.

Mine was a Norwegian puuko that was from my fathers uncle, to my father, to me. Each of us had to earn it by filleting a fish. Fish head handle, body of the fish was the sheath. Lost it gopher hunting, looked for it for years- pretty sure that the cows ate it out of the bucket I kept it in. Really saddens me to this day, I actually have designed it to remake it for my kids.
H

Buck folding hunter used and abused for years until I retired it for several other knives.

A tiny old timer my bro gave me. What started my addiction was when I bought a tacti-cool s&w folder at a military surplus store. I looked it up online and found out I got ripped off so I started researching. Been hooked ever since.
A

Given to me on my 12th birthday, November 1961, an Imperial US Officers Ulster 916. It's basically a copy of the old USMC "Demo" knife. In fact, it's faithful down to the post/stud on the screwdriver/bottle-opener blade and the words "Can Opener" stamped on the can opener.

I still have it. It has been overseas with me, to England, Denmark, Sweden, Germany, Greece, with short stops in France and Holland.

(BTW, it's not pink, it's red. The pix taken with flash have the right color.) 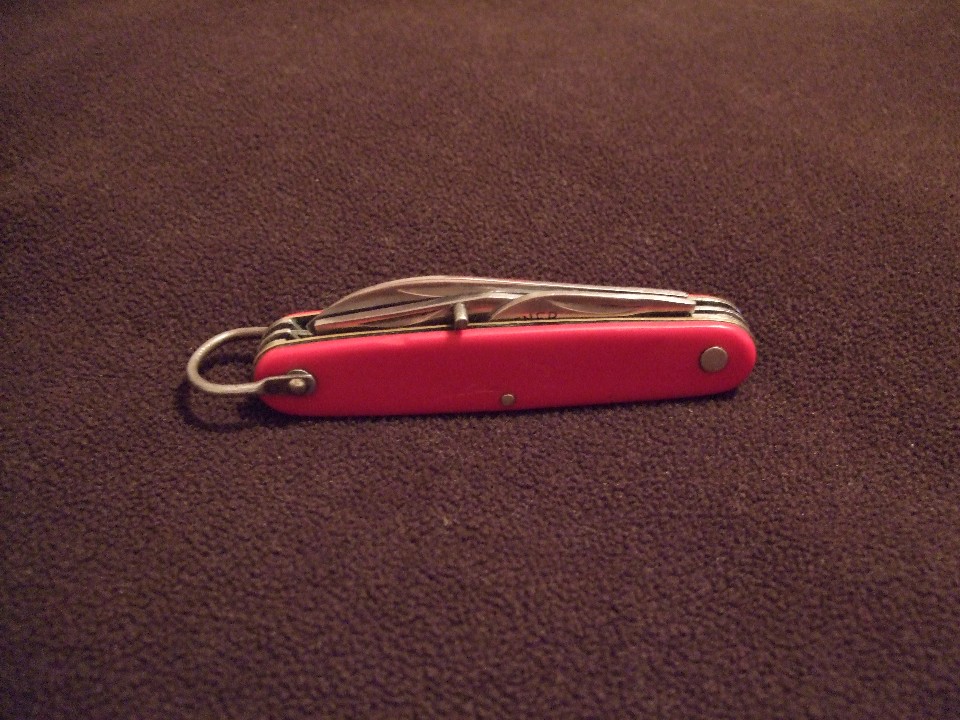 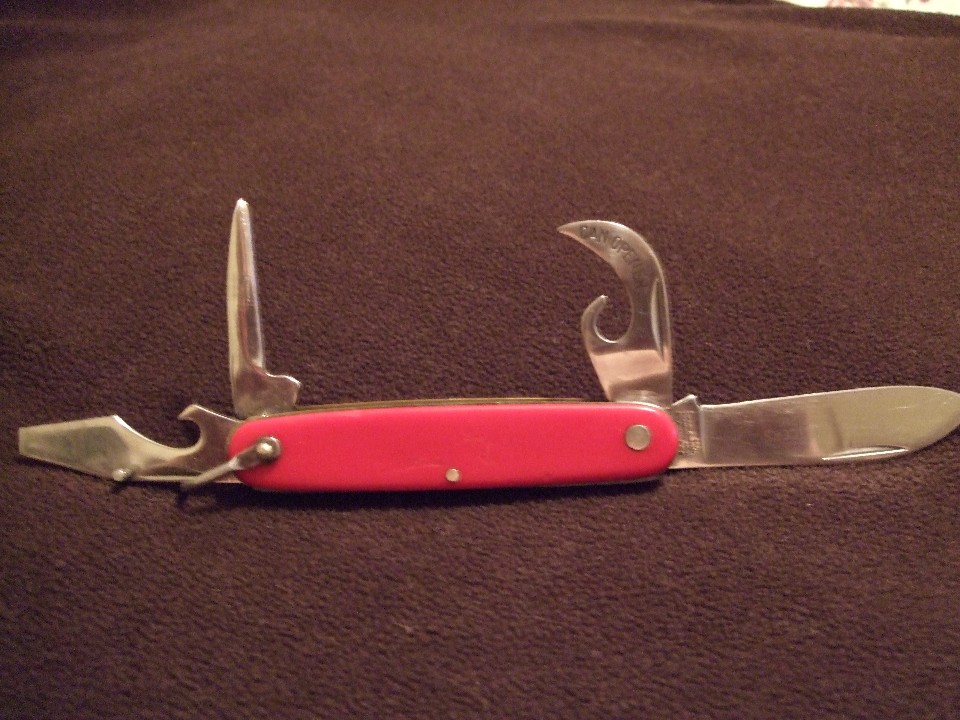 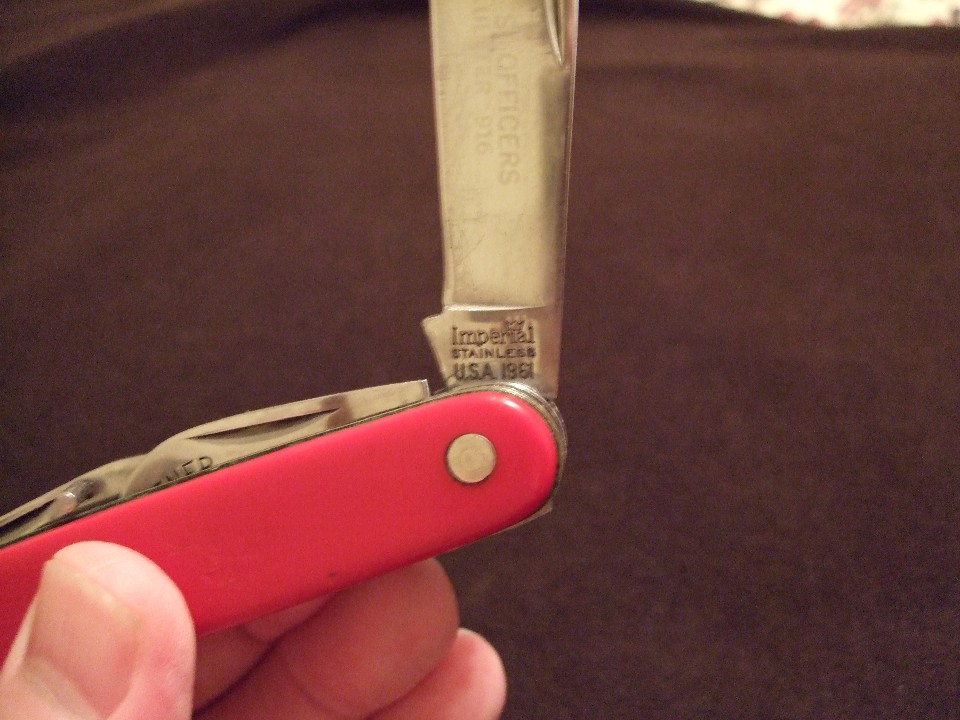 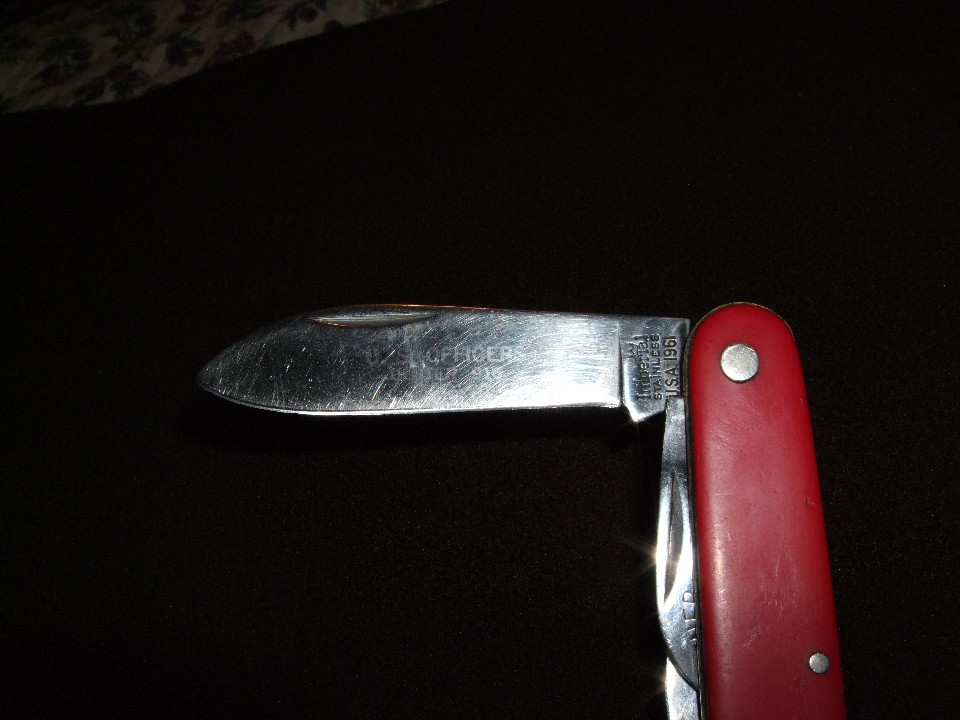 Mine was a spyderco Centofante 3..

Starting a couple of years earlier, Grandpa had a Schrade Stockman that I could use and carry when I visited, but that was "our little secret" so it stayed with Grandpa when I went home.

Then there was the knife I took to school but had to hide (from Mom, not the teachers) -- a not-so-good Colonial that said "Jack's Meats."

It was either a Barlow or a case..Cant remember which..
R

brets-ftw said:
first knife i won from selling popcorn, some cheapo 2 bladed stockman with flat red plastic inserts, parents took it away since it was "too slippery" in their eyes, switched it out for a camillus cubscout knife, but it wasnt until i bought a kershaw needswork that i really started getting interested in knives
Click to expand...

Wow, selling popcorn was exactly how I got my first knife. It was some Boy Scout lockback knife made in China. Kinda looked like a Buck 110, only a lot smaller.
H

I still have all these.

My first knife was either a Wenger or a Victorinox SAK. I got it for Christmas when I was 9 or 10, so around 1981. I remember my parents wrapped it up in a big old boot box, so I was expecting something larger than that knife when I opened it up. Imagine my surprise. As to what happened to it, if I remember correctly that knife went to a watery grave the following summer on a fishing trip to my local pond.

A legit victorinox when I was 8 or 9. I think it was a tinker or similar... Used it every day til the day I lost it when I was 20, it fell out of a rip in my cargo pants i didnt know was there and I spent literally the entire next day looking for it

My first knife was an old equal end jack with black scales and carbon steel blades which my father allowed me to adopt out of the tool drawer some 50 years ago. I have no idea which company made it, nor of how old it was when it came to me. It was not new by far.

I was ten, my first knife was a Camillus USA made "Official Boy Scout Knife". I still remember staring at it every time we went into JC Penny's. I really enjoyed Boy Scouts, but I think the only reason I joined was so I could have that knife (I guess this was an early symptom of my affliction). When I was twelve I bought my first knife with money I saved from my paper route, it was an SAK huntsman. I was really into Macgyver at that time, I think that knife stayed in my pocket for almost 8 years until I decided to upgrade to my first locking knife the SAK Adventurer. I always carried some kind of SAK until I joined the military. Thats when I started carrying "tactical knives" and the addiction continues....
H

My first knife was purchased in 1961, at Gibson discount store. Price was $1.29. A lot of money for an 8 year old boy. It was an Imperial "Kamp-King". It was not, by any means, a quality knife,but that knife and i went through over 10 years of adventures together. I still have it, it is still usable (not presentable). regards Henry
C

my first knife i ever had was the one i made myself out of a roofing nail with a duck tape sheath, i was 13 and my parents wouldn't let me have a knife because i was a little shit and was in daily fist fights with kids in my housing area, i was an army brat, when my mom found that shit my ass got whooped. too bad she threw it away, i can barely remember what the thing looked like. but i'm glad my mom found that because i could have really fucked up my life and my parents lives if i ever did anything stupid with that

...It started innocent enough. It always does. Christ, I was just a kid, man...Maybe '94 or so. It was a Rigid lockback with a slotted stainless handle & an ABS plastic thumbstud. 3 1/4 or so blade & a wiggly clip. Guys were selling 'em at the flea market. I never thought of myself as one of those "knife guys" but I had cash & nothing to do that weekend so I picked it up & started carrying it. It was my gateway knife.

I found myself flicking it regularly after that. It got to not be enough after a while. The plastic thumbstud broke off & I went looking to score. I saw a magazine on a stand & they were talking about some heavy stuff I'd never heard of before. "440C", "ATS-34", "Micirta", "G-10", "Michael Walker linerlocks"...none of the low grade stuff the locals used.

I called the numbers they gave me & asked for catalogues. That's how I eventually wound up into the heavy stuff. Benchmade, Spyderco, Cold Steel, Blackjack...some Buck or Ontario between paychecks...the first big step after the cheap Rigid deal was an AFCK I scored from a pretty heavy dealer, a dude named Jeff Loeffer. When I had the cash I'd call his people & they'd drop the stuff in my mailbox. It was so smooth...& it had an edge to it that wouldn't quit. Nothing like what I had before. Man, I was just a kid...walking down the streets in $10 shoes, Army surplus pants, a t-shirt, bald patch on my forearm, & 100 bucks worth of Benchmade in my pocket (AFCK could be had for $100 back in the day).

Here I am after all these years, up at 5 AM fiending on Bladeforums, bald patches on 3 limbs, DMT stashed all over the house, waiting for KW to drop an AFCK LE in the mailbox...Even turned my wife onto this stuff. She's into all that fat, leafy Spyderco stuff. We're taking it one day at a time, fellas.
Last edited: Jul 10, 2011

The first one that I can remember having was I believe a Victorinox Escort, from what I can tell by looking on their website. I have no idea what ever happened to it, but I do kinda wish I had that little thing. I think I'll have to order a new one.........
S

my first higher quality knife was a spyderco q. the blade was a spiderweb with a tick one it, serrated. my dad gave me that one he had gotten as a gift. he dismissed the blade as junk bc it had a plastic handle. I didnt knw what it was for many years and that knife was used many years until it broke one day cause i was doing something dumb with it. After it was gone i asked for a benchmade 530 for a present one year. i didnt knw many brands and my dad was from the time when gerber was todays kershaw but benchmade had a reputation for being the best around. my mom usually lets me pick out the knives since she doesnt knw anything about them and the 530 was the cheapest one i saw. $60 at the time i believe. that knife really opened my eyes to what a knife can be. 154cm in a slim profile and that axis lock. i still carry it today every now and then, it is just so light and slices soo good. i felt like james bond with that knife. only the blade was a lightsaber.

When i was showing it off at christmas one year opening presents my uncle who is a forest ranger referred to it as a shanking tool. to which i replied "prisoners cant afford benchmades"
what can i say i was either in 8th or 9th grade and very proud of that knife and he hurt my feelings. haha

the spyderco Q made me appreciate a good knife (serrations too) but the benchmade made me into a steel-snob/junkie.

then at hillsville va at the giant flea market they have everyyear i was a spyderco salt1 se. I was missing my little q and want another serrated spydie and this one just happend to have a fancy h1 on it. and it was kinda gold looking. haha once again i didnt even knw what it was until i had carried it for 2 or 3 months. when i saw that h1 couldnt rust my first thought was that the knife must be some kind of magic