That bone looks really nice, I like the sunlight pic!

Beautiful!!!
That's genuine case old red bone.
I wonder if they are not doing it anymore to enhance the collector's value of the antiques or if it is really a more costly process for them
Mateo
J

thanks rbeggs, and lutejones. I wish case would do there red bone more like the vintage too. I am very pleased with the results I got.
B

I thought I would bump this thread up again as I am about to undergo this process as well. I've got an old case medium stockman with bone scales and broken blades that I'm going to to transplant to a newer knife with yellow scales and good blades. The bone is nicely pocket worn but the colors are badly mismatched. I don't know if it was originally like that or if one side was exposed to sunlight but either way this is a perfect opportunity to try the Rit dye experiment. Here is the before pic and I will update when I get done with the dying. So here it is after dying And here it is all put together. The dye didn't hold as well as I hoped so I've got it running another course in the bath right now. Now this is what I was looking for Brilliant job guys! Some really nice transformations. It's shocking how bad some of the "before" pictures were.
You really have to wonder what they were thinking. What an improvement!

Just used this method and it's flawless. Very nice Jollytime...the black came out nice and even! Although the original blue green was not that shabby a color.

It wasn't bad but I really didn't dig it. If I kept it that way I would have ended up selling it and I really wanted to keep it.
D

I just gave this a shot tonight with rit dye. Works as advertised.... i probably left mine in closer to 25 minutes because i was going for that dark look. Heres some pics.. 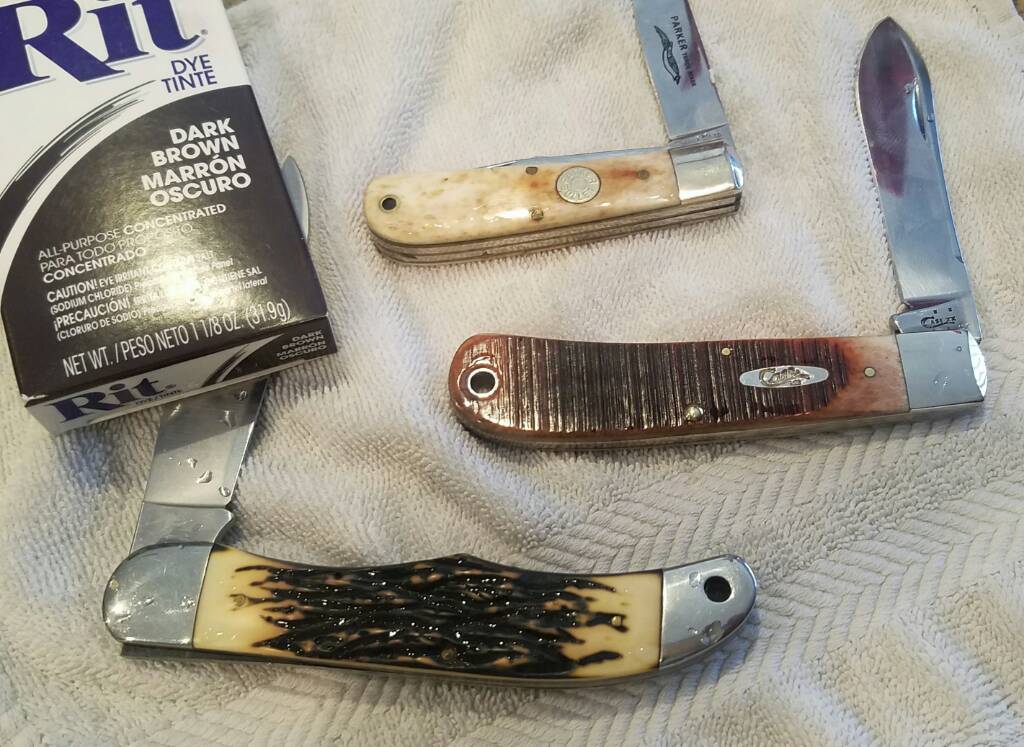 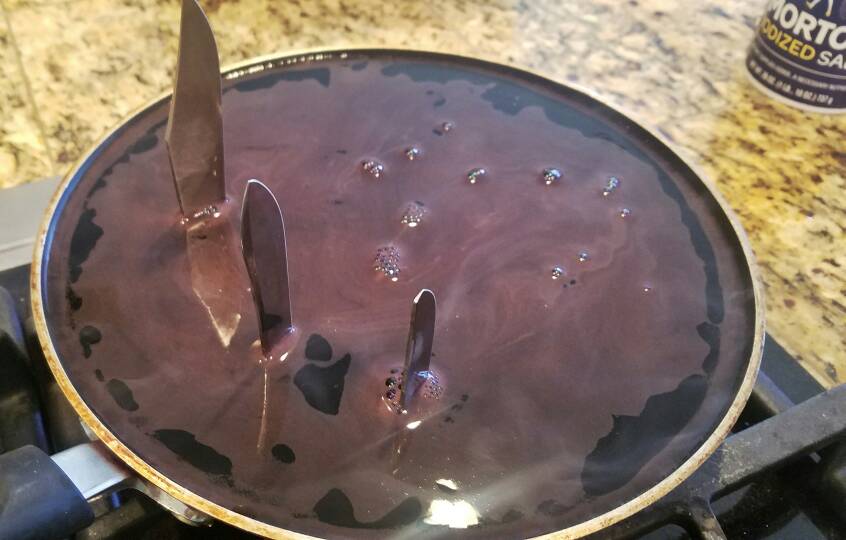 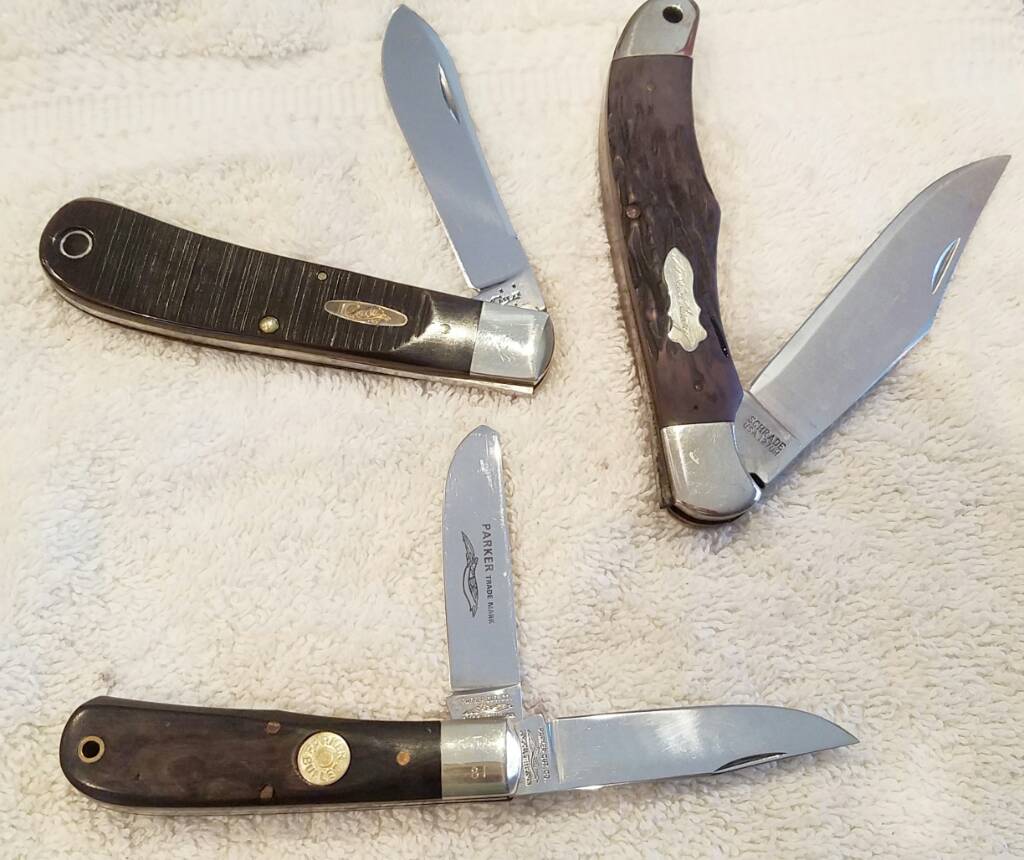 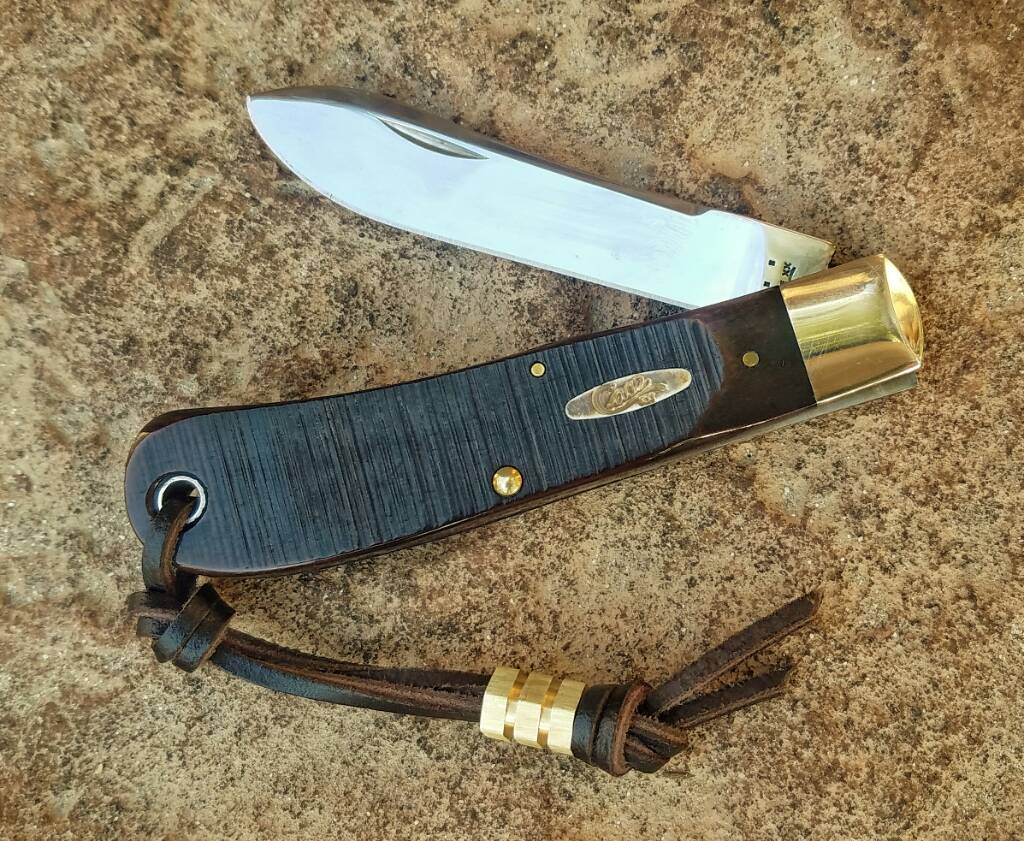 Thanks for the info fellas.

Sent from my SM-T715Y using Tapatalk
A

Several months ago I bought my first new traditional in over 25 years. It was a Case medium stockman (6318 SS) in a blister pack at a sporting goods store. I've always liked the knife, but I thought the amber bone was a bit boring, at least on this pattern. Since then I've picked up a swayback gent in burnt amber bone, and just last week I bought a small Texas jack in amber bone. Well, that was just too much amber bone! Nothing against amber bone, really, but three knives with similar covers kind of bothered me. So, I decided to give re-dyeing a try. I considered trying blue or red, but I was afraid that might combine with the amber to end up with some really weird color, so I defaulted to brown. I brought about an inch of water to a boil in a small saucepan, added a couple of drops of dish-washing detergent and a splash of white vinegar, poured in some dye, turned off the heat, and placed the medium stockman in the pan. After 15 minutes I removed the knife and sat it in a plastic bowl to cool. After it cooled down a bit I thoroughly flushed it with water, dried it, lubed the joints with mineral oil, and gave the covers a thorough rubdown with mineral oil. Here's the result, which I think is a great look for this knife. 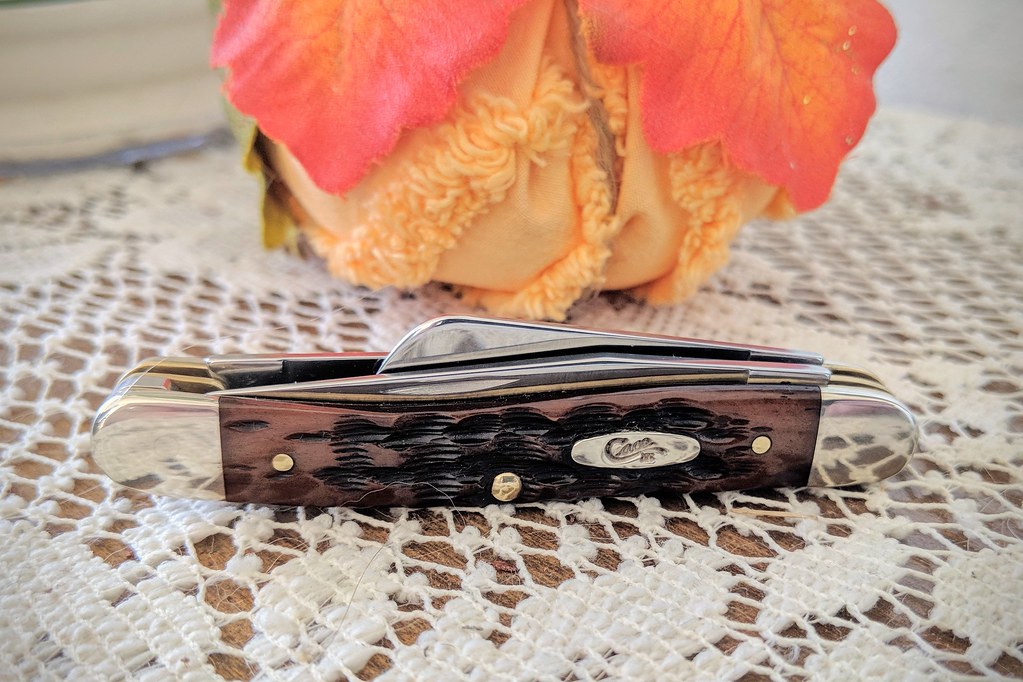 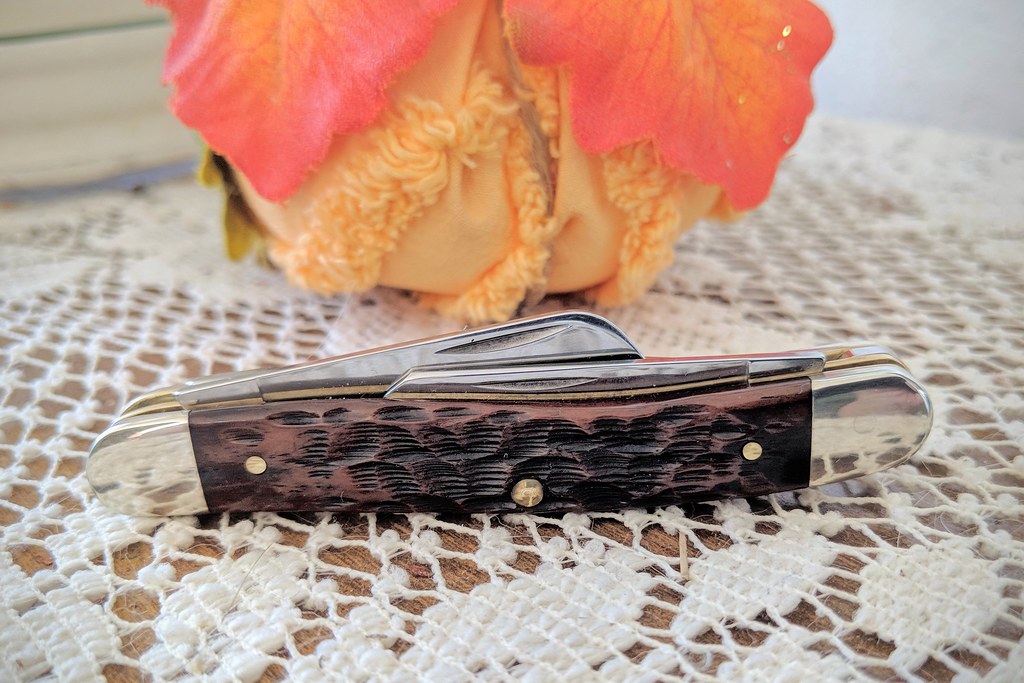 You did an excellent job---that looks great.

I just did this with a GEC and it turned out nice, but I got some black spotting on the blade and backsprings. Not a big deal, this knife was a user anyways, and I can always sand and polish it off. But I'm thinking about doing this with the new GEC 77 elderberry to get it from the pink to what their elderberry bone usually looks like. It's a new knife, and I'd want to prevent or at least minimize the spotting that happened with this one. Did this happen to your knives when you did it? Any tips on minimizing it?
L

leeramundo said:
I just did this with a GEC and it turned out nice, but I got some black spotting on the blade and backsprings. Not a big deal, this knife was a user anyways, and I can always sand and polish it off. But I'm thinking about doing this with the new GEC 77 elderberry to get it from the pink to what their elderberry bone usually looks like. It's a new knife, and I'd want to prevent or at least minimize the spotting that happened with this one. Did this happen to your knives when you did it? Any tips on minimizing it?
Click to expand...

Few pictures, I just wanted to make the corners near the bolster more red. This process did the job in 5 minutes. L leeramundo I continued to experiment after I posted this and in one instance I caused some pitting of the blades. In that case I had the blades half open and sticking out of the hot dye, and the pitting occurred near the air-water interface. Everything I've experimented on has been stainless steel, by the way. There must be some complex chemistry going on in the hot dye bath and I don't know how to avoid the pitting and/or spotting. Some people add vinegar to the mix (that's what I've done) and some add salt; I don't know if one or the other might cause or prevent the effect.
Oh, one other thing I've done is to heat the dye bath to boiling and then turn off the heat before introducing the knife. Some people let it simmer during the process. My thinking is that not keeping it quite so hot might help to prevent problems, but that's really just a guess.
Hope that is of some help.
L

Thanks. Yeah I kept the heat on and probably a little more than a simmer for the process. I also took the knife out a few times to check just in that 5 minutes. So those things might be it, more heat and more exposure to air while the process is going on. I'm gonna do another knife before going for the GEC 77 and see how that goes.
J

What's really important is preparation of the surface.
I have found that the best thing to use is sodium hydroxide based oven cleaner.

This strips away any waxes or oils that might inhibit the dye.

Spray a little into a container, dip a cotton swab into it, and use it to scrub the surface of the bone.

Wash it off thoroughly before dyeing, because it is alkaline and might prevent the dye from working properly.
Last edited: Sep 19, 2022

Photobucket ate my pics from earlier in this thread. I saved the images, though. Here are my before/after shots: