A month or so ago, I brought a Ryan Biohazard to an off-line in the SF Bay area. I finally have a decent picture taken with a digital camera in a file. It's placed below a Civilian as a frame of reference - pretty sexy. If someone can take the digital file and put in a form that can be posted here, I'll be happy to email them the file. Contact me at [email protected]

GOOOOD GOD!!
Biohazard is a VERY apt name for this one.
GEEZ!

Havin' fun, learning and putting up with Bastid.

I just had to come back to this thread for another looksee.
This thing looks like something you'd find clipped to Freddy Krueger's pocket.
I'm gonna have nightmares tonight!
I think I need to go double check my nightstand and make sure Mr. 9mm has enough Glasers in his mag.

So I gotta ask. where do you get one of these and how much do they cost?

In the "sick minds think alike" department, here's my "Outsider". It and the Biohazard are *totally* unrelated designs, I'd never seen the Biohazard and neither had Harald Moeller my co-designer, and I'm pretty sure the Biohazard predates the Outsider.

Both are attempts to add stabbing ability to a "forward hook Civilianoid" blade type. 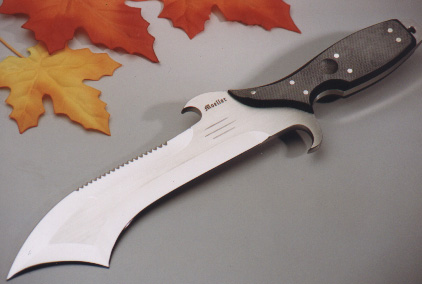 It's an answer to the question of how to get a centered point back onto a hawksbill blade.

I've got a lot of doodles like that (actually, they fall somwhere between as radical a hawksbill as that and as shallow a hawksbill as Mr. Ralph's Krait) but I never dared take it to steel. I'm very impressed. The thing that's confusing me is that I could have sworn I saw a Biohazard in TK or Blade about two years back that had no such point, just a more Civilian-like hook at the tip. Maybe it was only a partial pic, I dunno.

Anyhow, some of us just dream and doodle and others go to the grinder and give it a go. I'm kicking myself, but I'm also thrilled to see this "for real." Great looking knife.

My comments were for the Biohazard, but I see Mr. March has posted his beauty as well. Always happy to see that pic!

A couple of points of interest. Corduroy is right in that Ryan made a "Biohazard II" that appeard in The Blade. It was for Med/Emergency teams and designed for cutting seat belts, webbing, etc. and so had a Civilian-type hooked tip with no stabbing capability.

I bought the knife shown from Steve for $350, which I felt was a steal. I don't know how many more he's made or if he's even interested in making any more. You'll have to contact him.

Thanks for the info. So, how do I contact him, what is his full name?

There's a couple of REALLY cool things about the Biohazard that aren't immediately obvious from the pic.

#1, that whole area of grip around the pivot and ahead of the first finger notch is NOT meant to be grabbed, or even touched. And that means that your finger is always well clear of the linerlock release tab, solving the single biggest linerlock problem, that of accidental release in mid-fight as can happen with something more "AFCKish". The release tab on the linerlock is only on for "forward end" of the notch, away from your finger.

That also effectively gives you an additional inch of "range" without stretching the blade.
It's absolute *genius*.

The blade is of THICK stock. Not quite 1/4", but a lot closer to that than what you usually see on folders. This is necessary due to that "weak spot" where the hook makes the blade thinnest. I'm not saying it's weak, it's not. It's a superb "hooking/tearing/ripping" pattern but it doesn't have enough heft for "smashing" attacks so the blade pattern is fine for the application. If you tried to stretch this to Outsider proportions (9" from base of choil to outer tip and 1/4" stock" the Biohazard pattern might fail on a heavy smash but in this form, no way.

Awesome piece. The only downside is probably the chisel grind but even then, it adds overall strength and since it's NOT a utility knife AT ALL, frequent resharpening isn't going to be an issue.

Last question: what's the contact information for this guy? Dunno if I can afford one just now, but...b'gawd it's tempting.

And just what, pray tell, do you plan on doing with all these knives, young man?

That biohazard is a very cool looking knife.

He was featured in the March/April American Handgunner. For a catalog send $2. to:
Steve Ryan
PO Box 30504,
Long Beach CA, 90853
The pictures in the magazine were awesome. I am ordering the tanto Model 4.
B

This one makes me smile (or is that an evil grin?).

Thanks for the look Milan (and Greg).

I hate to disagree with everybody here. But does this knife have any value martial or utility to justify it's god awful looks?
S

I agree with Root on this one. The latest trend seems to throw practicality out the window and adopt a bunch of bizarre, generally useless, blade shapes. Look at the Microtech Vector; what the hell is that all about? I like creative knife design as much as the next guy, but let's call these what they really are: fantasy knives.
You must log in or register to reply here.
Share:
Facebook Twitter Reddit Pinterest Tumblr WhatsApp Email Share Link
Top
Change Ad Consent Do not sell my data