Saw that these landed at a popular store. Surprised they lasted this long...
D

Some people are still hung over from the SMKW PM2 and others are in a holding orbit for the Crucarta PM2 that's said to only be weeks away now.

Makes sense. Just remember trying to get REX45 when they were first released. A Crucarta PM2 would be really nice...

So, there I was this morning on the computer ( after working nights and getting home a 5:00 ) for the knife to be offered. It appeared that the site was crashing and I instantly thought about the SMKW drop selling out in a matter of minutes.
Couldn't get the site to run the first time, finally got on and put one in the cart, then I get kicked out. Logged back on and put one in the cart not knowing I already had one in the cart. I go to pay for it and have two in the cart, don't want to waste time to try and delete one, so I pay for two. BTW, taxes were added on which is a first for me.
Looked again about an hour later to see if they were all sold out only to find they're still in stock. Looks like I panicked for nothing. I guess a back up won't be a bad thing.

Yeah, new laws went into effect not long ago, online retailers have to collect sales tax for the state the mechandise is shipping to.

In for one! Those handles are awesome!
S

I couldn't resist. The black dlc with the copper handle looks to nice.

I told myself I’d order one if they are still available today, 8/28. Looks like I’ll be a new owner of one of these, as well. I haven’t bought a Spyderco for quite a long time. That copper and black look so good. I couldn’t resist.

Fast shipping on this one; tracking has it arriving today...

Mine landed today. Be a good self protection knife. If they are far away, throw it and knock them out. This thing is a heavy tank. In all seriousiness it is a beautiful knife.
K

This is one of those Spydercos that, years down the line, I will kick myself for not ordering.

I imagine the patina will be very interesting as it get carried and used.
S

1st pm2. Into the pocket it goes !
I hardly notice the weight. Feels sturdy that's for sure.

Mail was running really late today, but received mine right at closing time at work. I'll get a look at it tomorrow...
M

I notice that BladeHQ at one time offered a PM2 copper with a satin finish Rex 45 blade.

Don't know if I really like coated blades.
A

I don't have many coated blades, but this one looks really sharp w/ the copper handles imo. Excited to get mine on Wednesday. 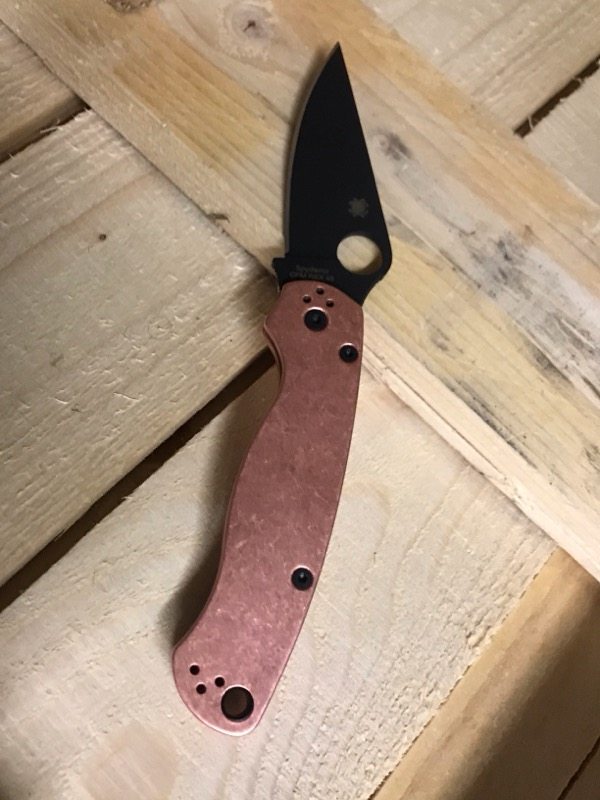 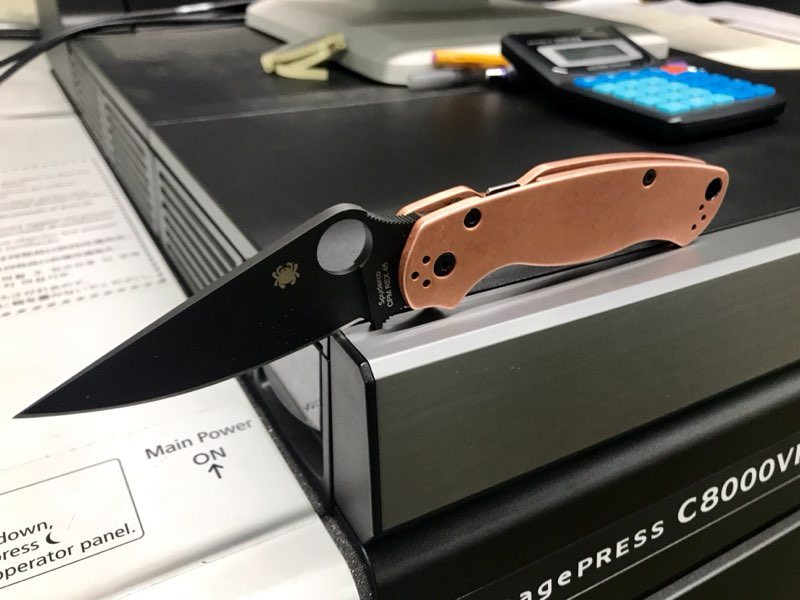 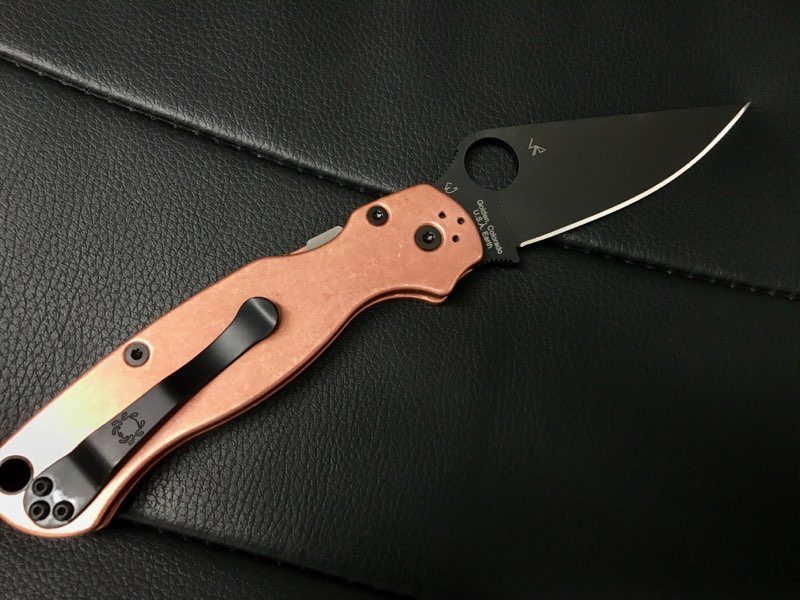 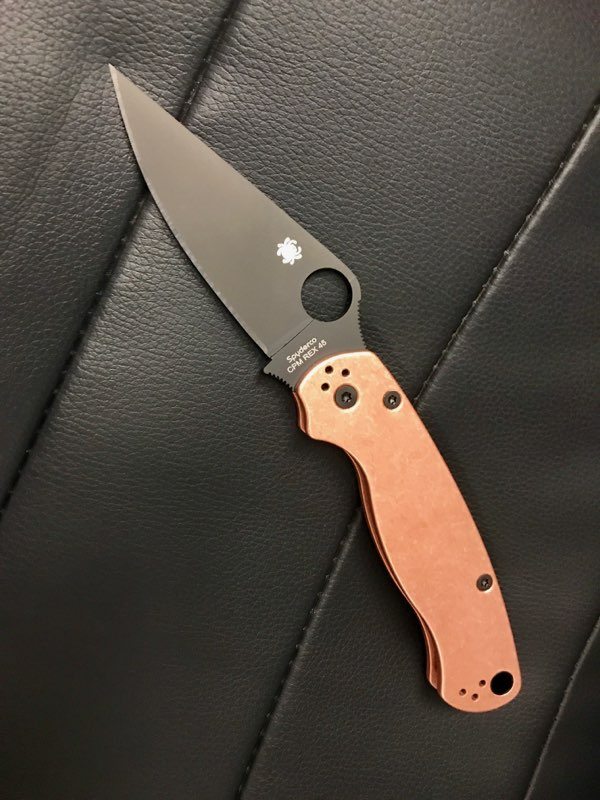 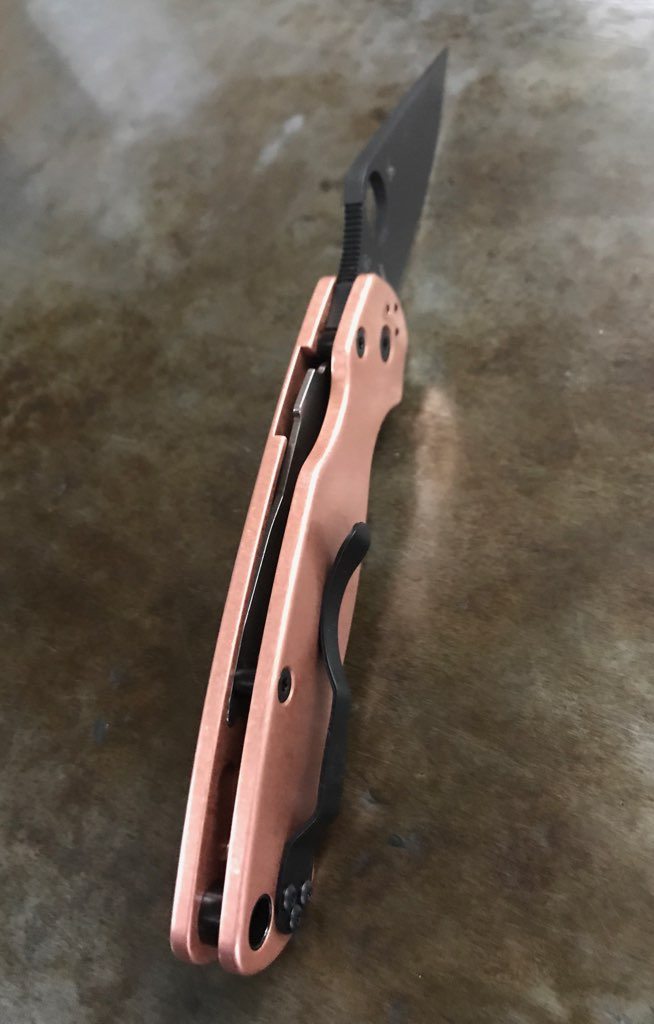 I’ll be returning the one I received. It requires two hands to open and close. It looks nice, though.

DRLyman said:
I’ll be returning the one I received. It requires two hands to open and close. It looks nice, though.
Click to expand...