I make cowboy knives, its what I do. Around Christmas time I'd received several requests to build an old style knife pattern known as a blunt nose castrator, or in the vernacular a "nutter". Honestly, I didn't really want too. They were kind of foreign to the traditions I know growing up in the cattle country around here. Around here we rope calves to be processed and will usually have a horse holding the back legs and another the front. Having the front legs and the back legs roped and held off the ground prevents the calf from struggling too much. This pic kind of shows what I'm talking about: 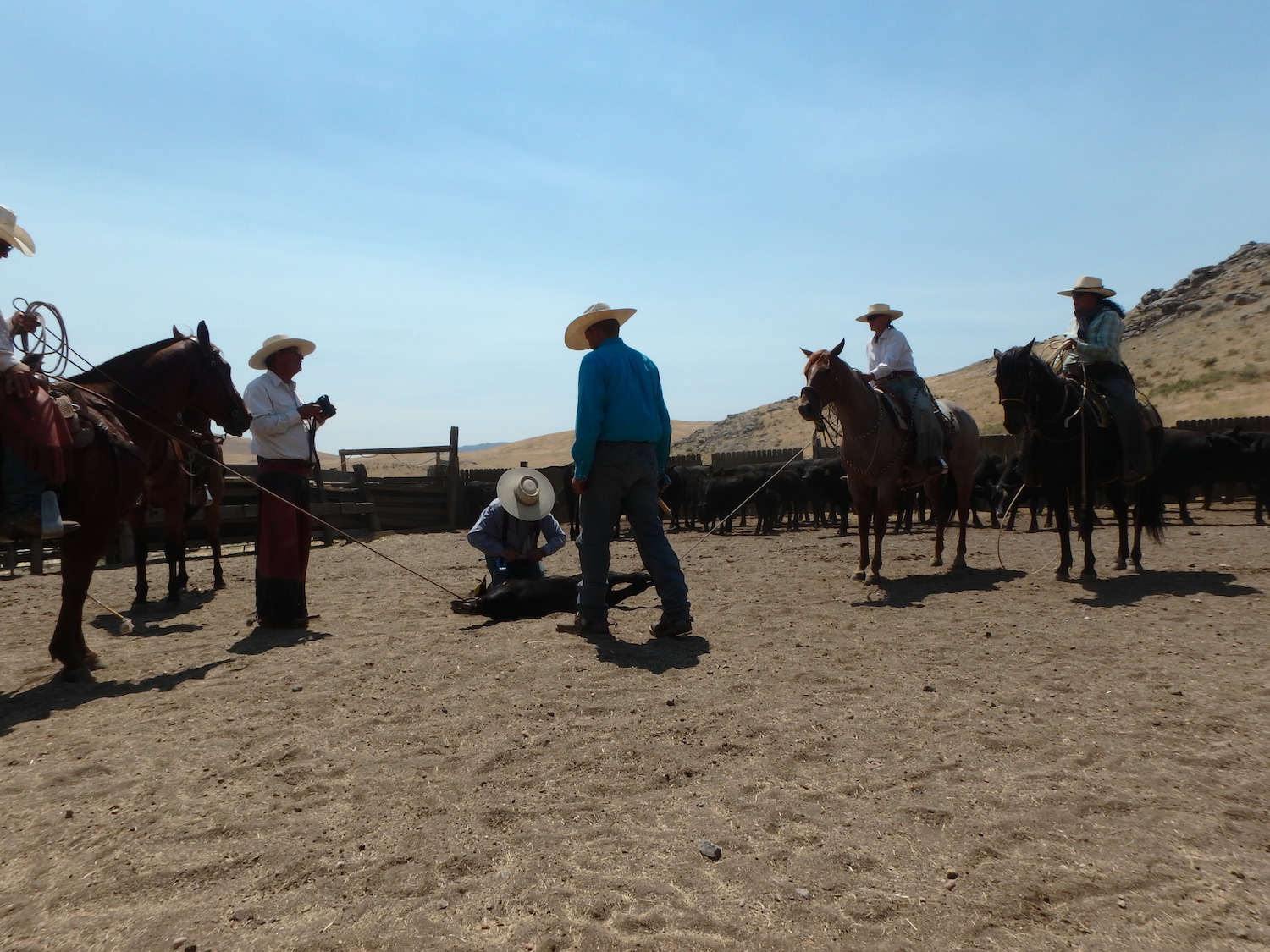 Course working with animals not everything always goes right and sometimes ya have to make a quick recovery as this funny little clip of my son going for a quick little ride shows:

The knife used in this part of the world for cattle work tends to be thin bladed and pointy, think main blade on a trapper. Its required cowboy uniform around here: 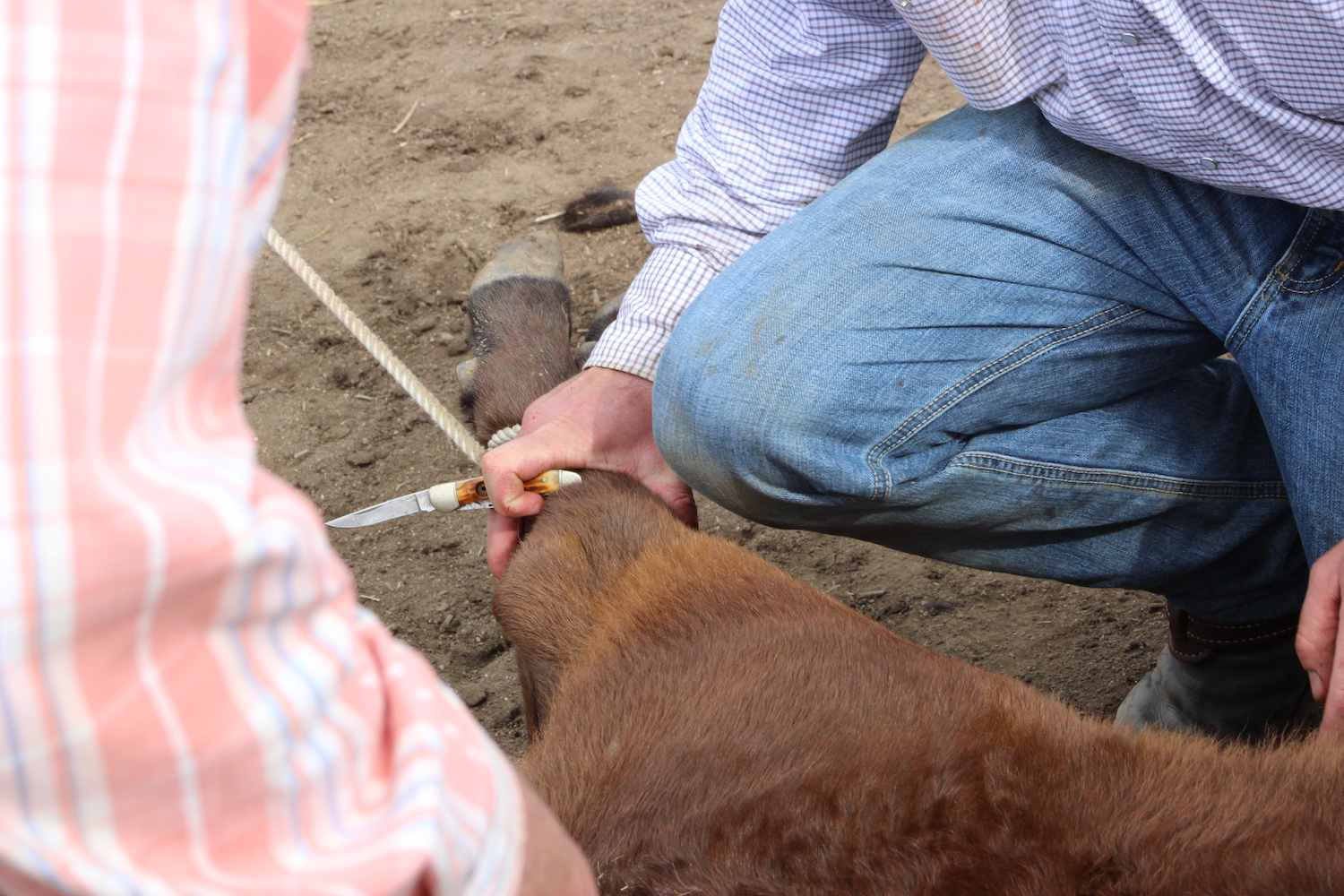 As far as fixed blades go my Tapadero was designed by an extremely experienced cowboy (estimated at having cut over 1,000,000 calves in his career) as the perfect branding knife. I have made and sold many hundreds of these Tapaderos over the years it has been one of my most popular knife models. 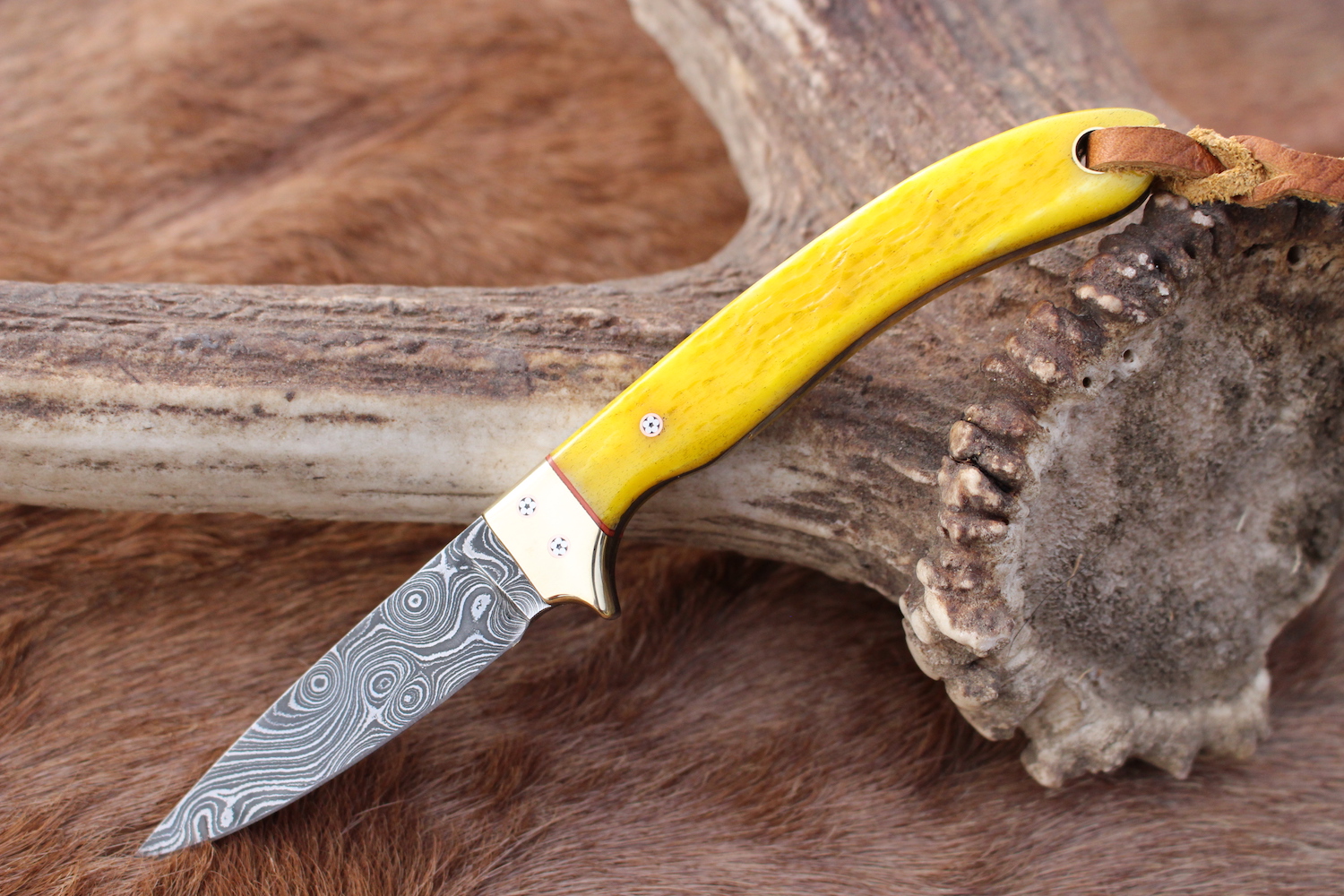 In another post on Spey blades some months back I'd mentioned that I'd never seen one used for castration, that it was always the main blade on a Trapper. Course as soon as ya say something like that it happens. Ya see someone use a spey blade. Still this young man is the only one I've ever seen use the spey. 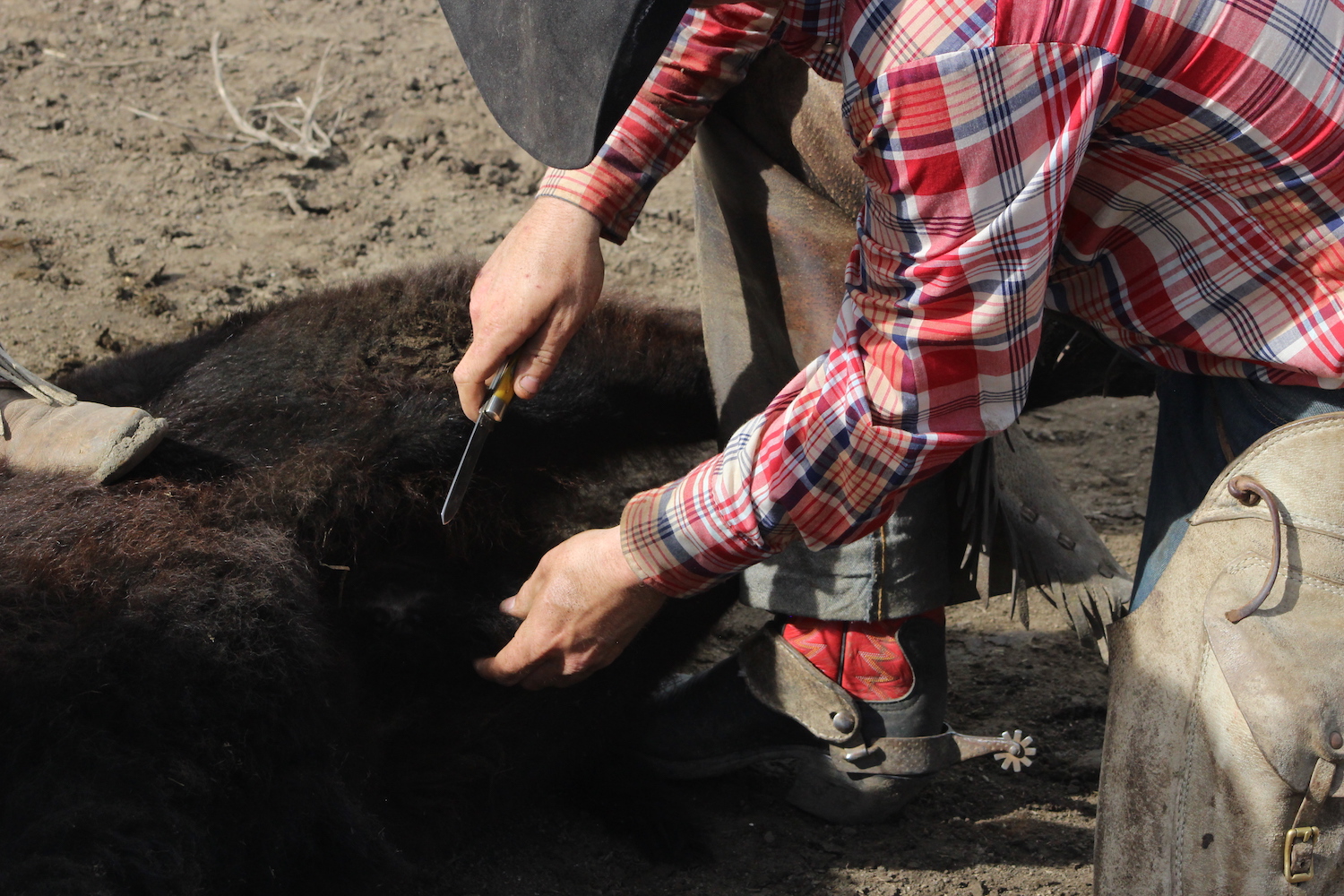 Other parts of the country they have different traditions and methods. Often times cattle are worked in a squeeze chute. We've got one and use it for certain things like doctoring adult cattle, giving injections, things like that but always on adult cattle, we don't use it for branding. But other areas they do. So in the pic of the chute, the panel with the oval white sticker on it, on the right side, can swing away and that would give ya access to the right area of a calf to do castration. 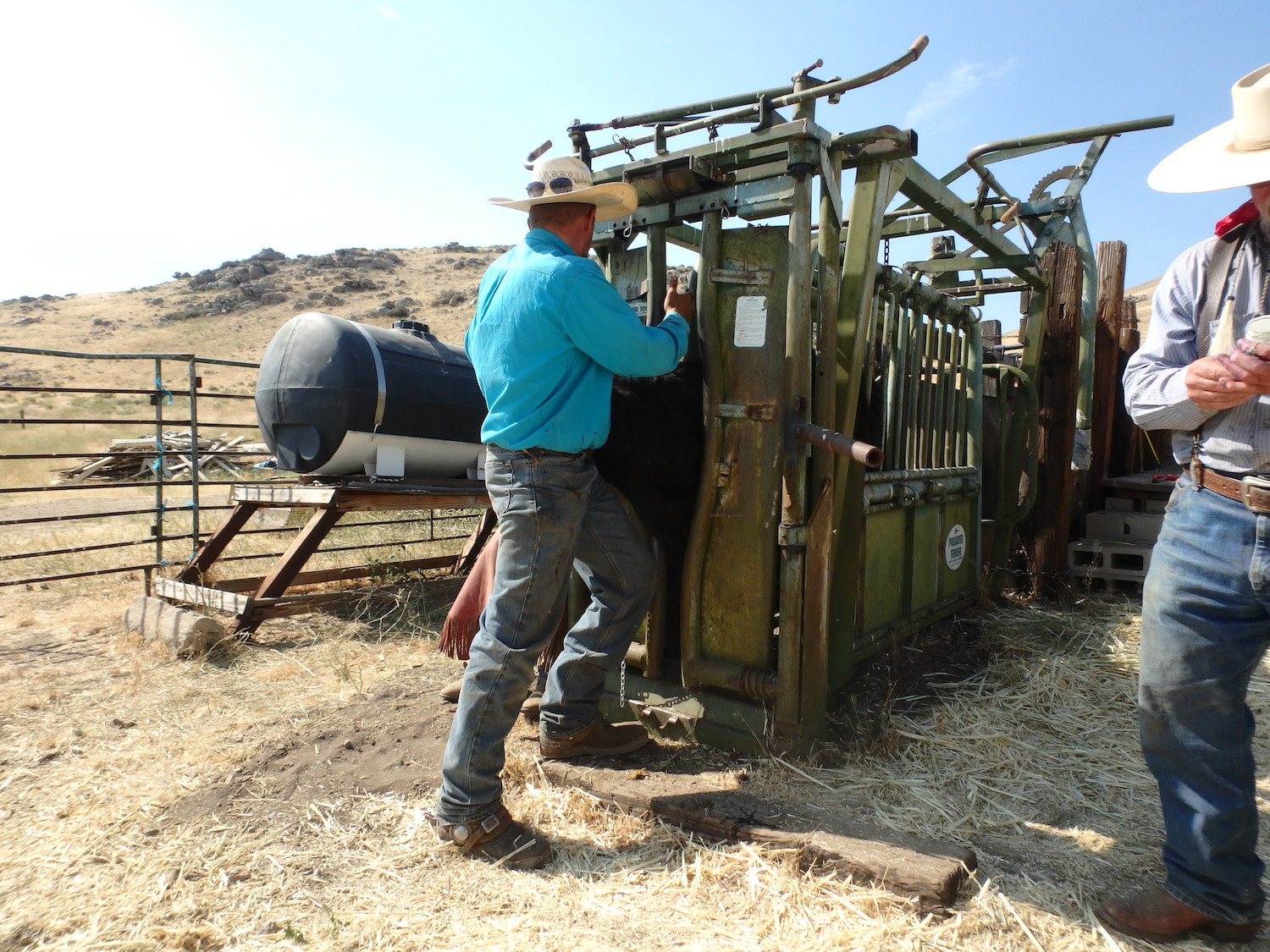 This steer had a foxtail, a type of sticker way down in his eye. So Salty and my son are removing it. The two vertical walls ratchet in and "squeeze" the animal from the sides helping to restrain it. Where the steers head comes out is called the head gate and this prevents the animal from moving forward or backwards too much. 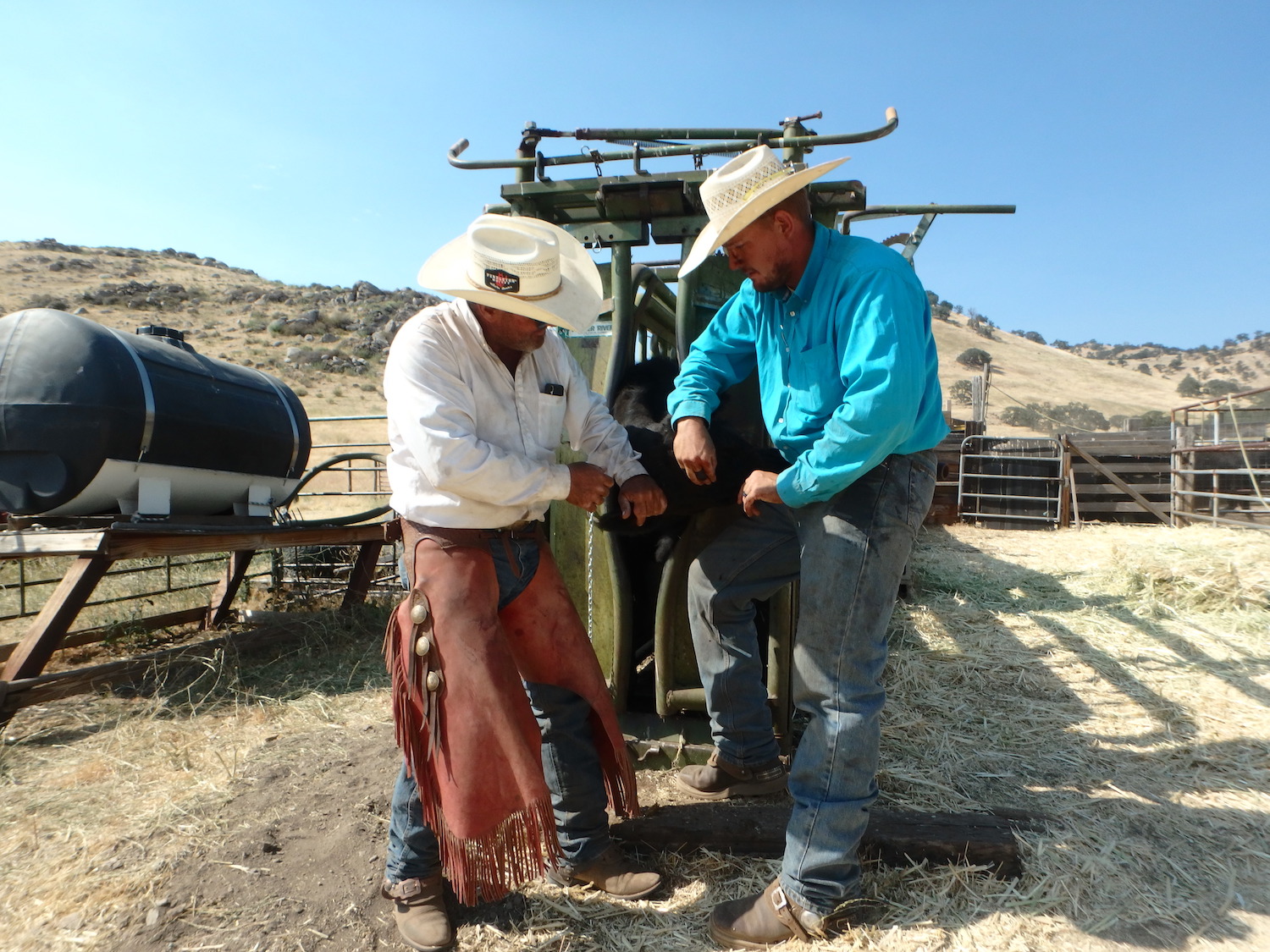 So then one of my wholesale accounts asked for a couple of these blunt nose castrators too and I thought I'd better start thinking about it. I called one customer that I'd spoken too previously and I asked him why a trapper or one of my Tapaderos wouldn't work. He said what the problem is is that when cutting in the chute sometimes the left hand can get kicked back into the right hand, ya know the one holding the pointy knife. Said it'd happened to his son a couple of times who had been cut using one of my knives as he was now working at a place that cut calves in a chute. They also wanted a deep finger groove or guard to keep the right hand from riding up onto the edge when the left got knocked into the right. So I got on the internet and started looking at a lot of pics of these types of knives. They'd been around for centuries and really the Spey blade shape is kind of an adaptation of this too, its what its used for.

So after some head scratching, some cussing and discussing, grinding metal and then grinding more metal this is what I came up with, the first three. Kinda a cross between a spey blade a straight razor and a nicer handle: 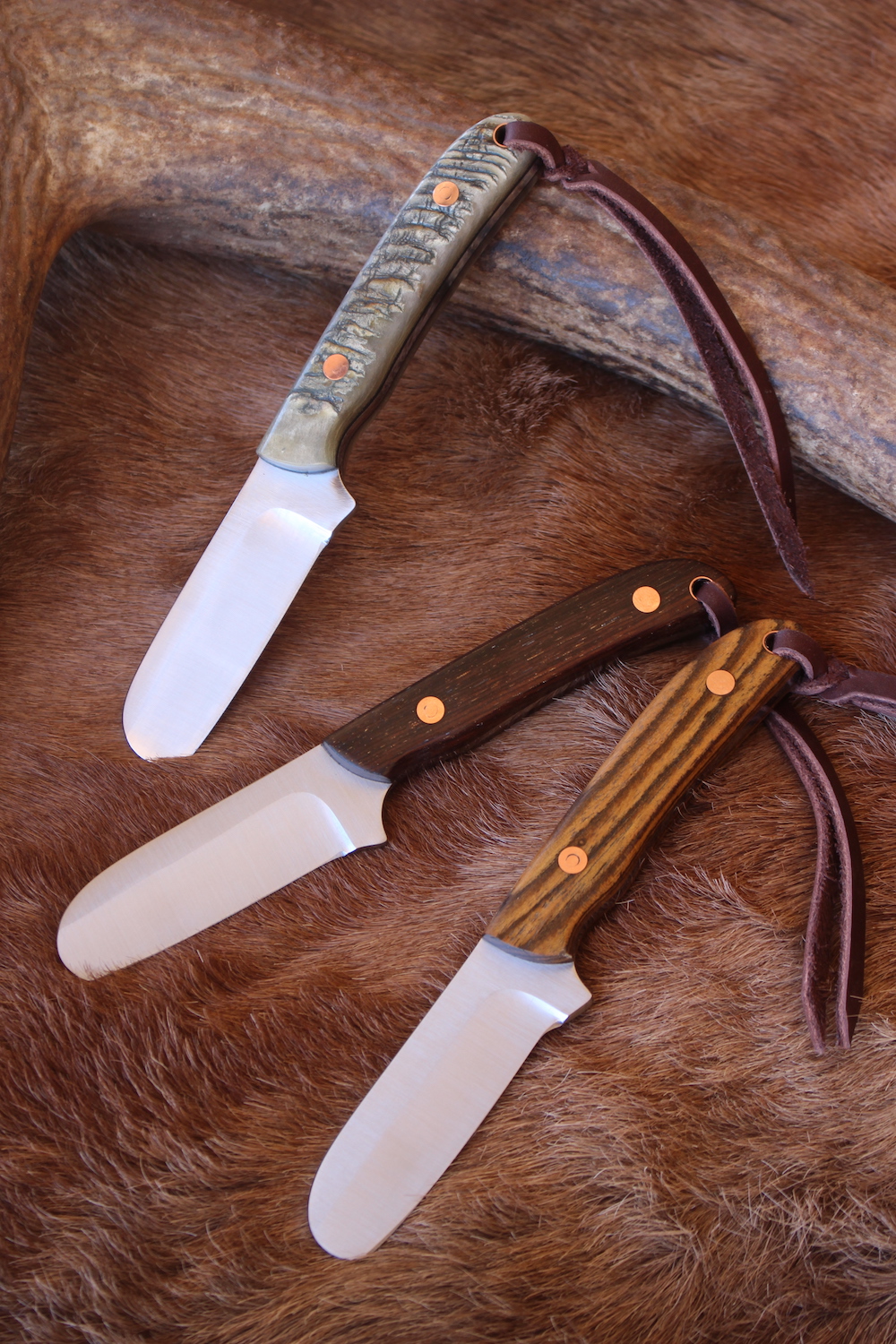 So the sheep horn handled one went to the son of the customer that explained their use to me. The rosewood and bocote handled ones went to my wholesale account in AR.

Vertical pancake sheaths to keep things in tight and out of the way when bent over and working fast around the chute. 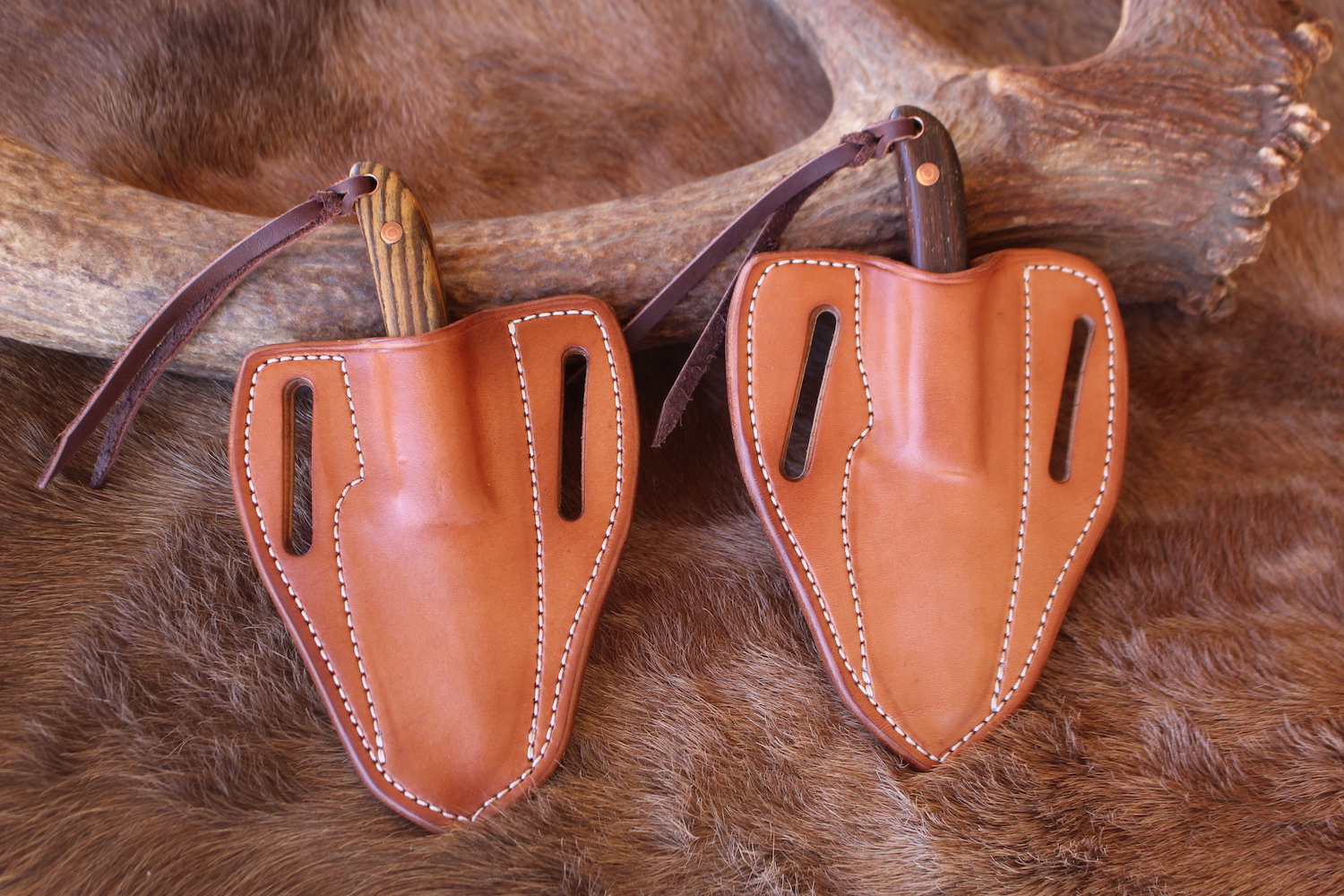 Deep hollow grinds resulted in a slicer and a dicer. 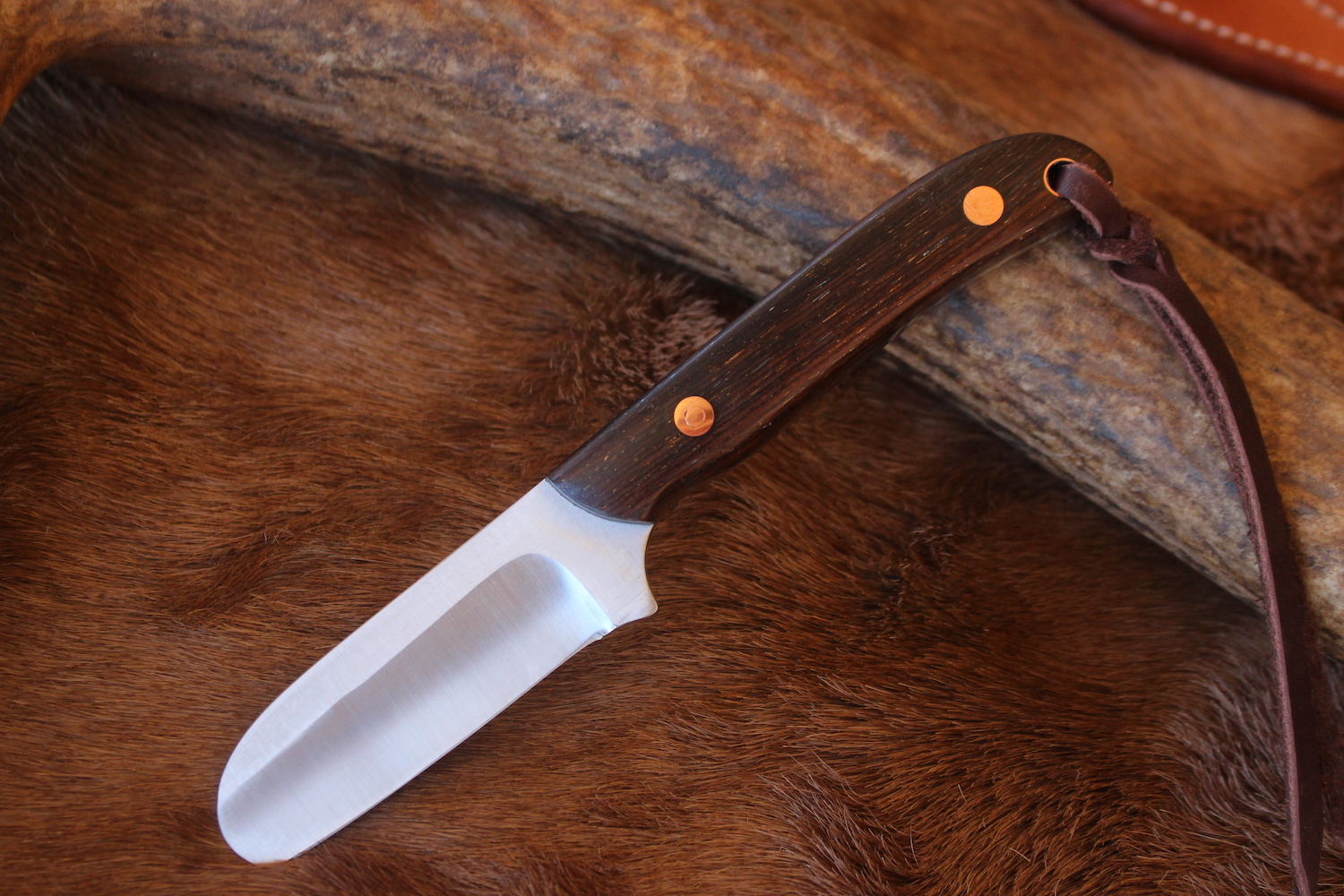 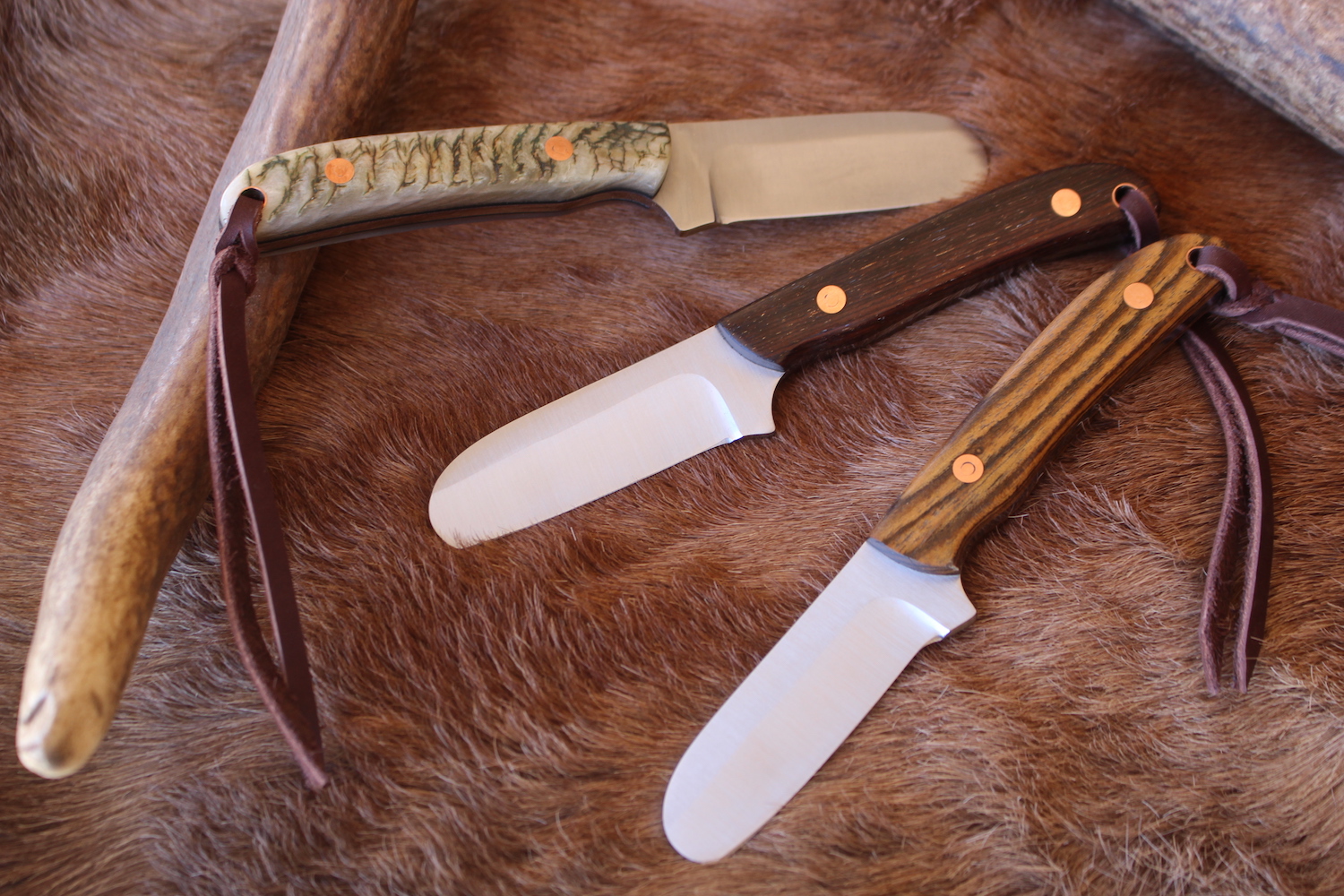 Pretty darn nice piece of sheep horn. Steel is AEB-L @62 RC so these guys will hold an edge yet are easy to touch up in a corral. 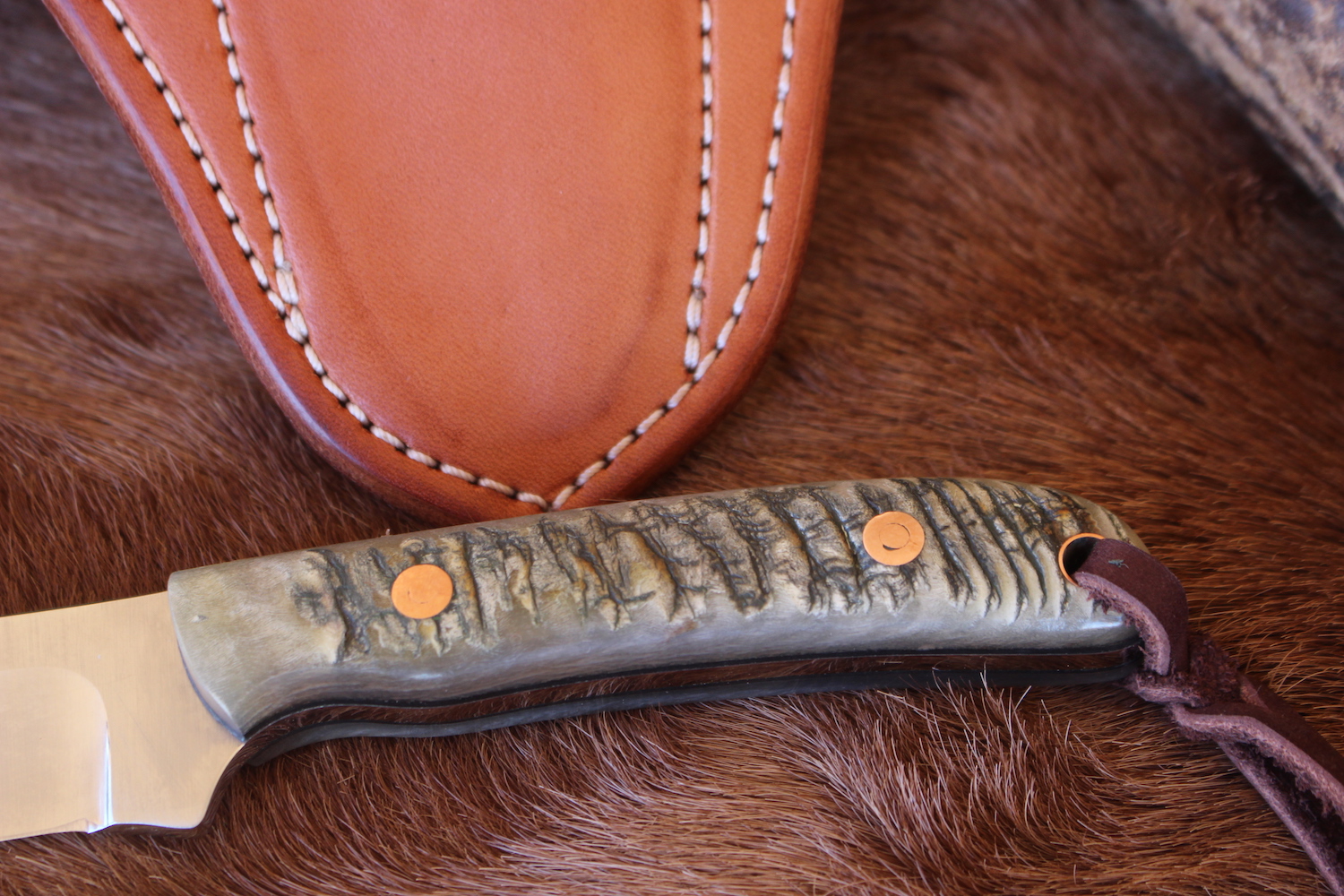 So I thought what the heck lets make another one, elk this time: 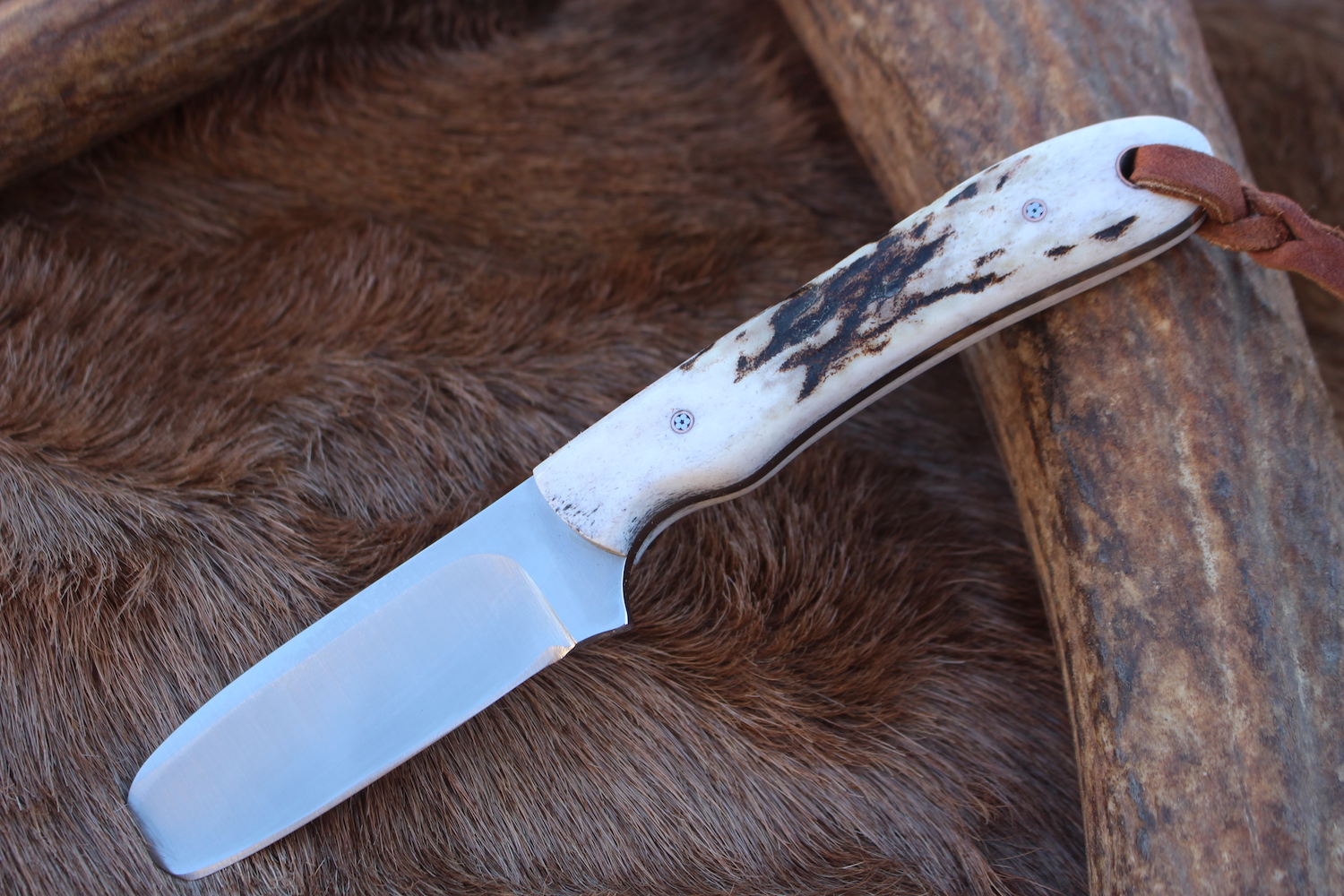 Dang if it didn't sell overnight. Bout the same time a guy called and said "I need one out of your mascus steel". Ya know how the customer is always right? Cocobolo on this one and its not a great pic but it was a striking piece of mascus: 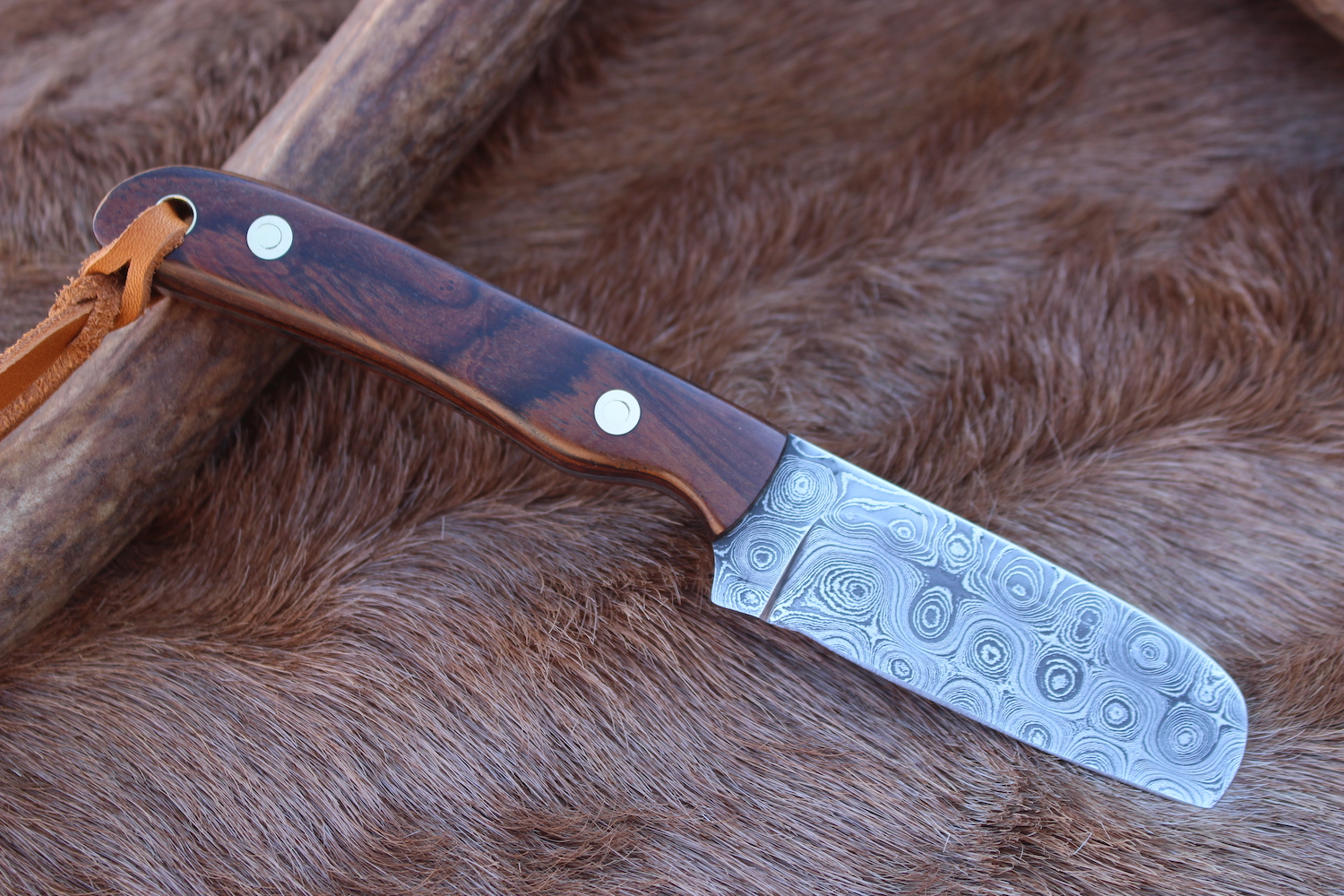 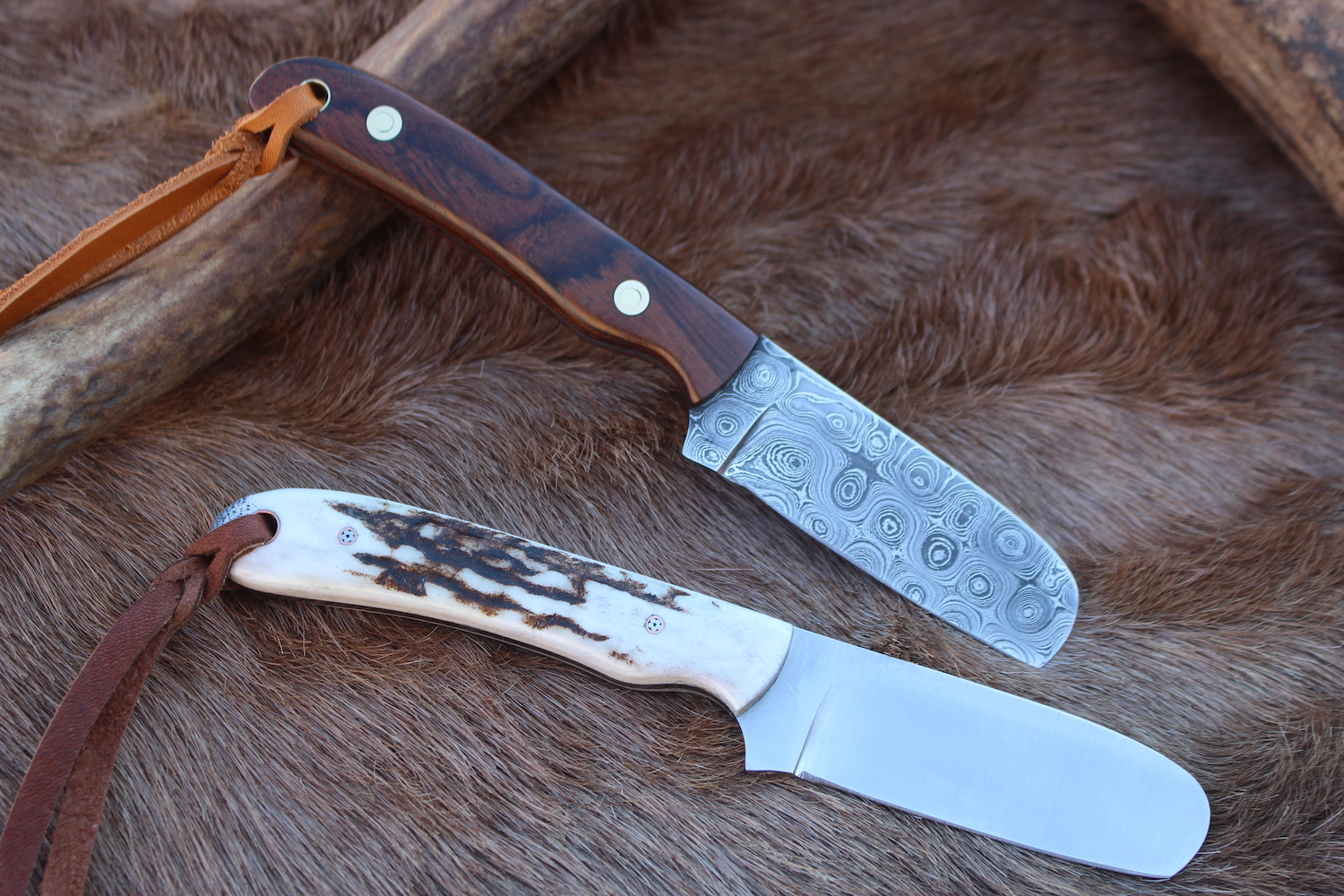 He wanted a Horizontal sheath though and he's a lefty: 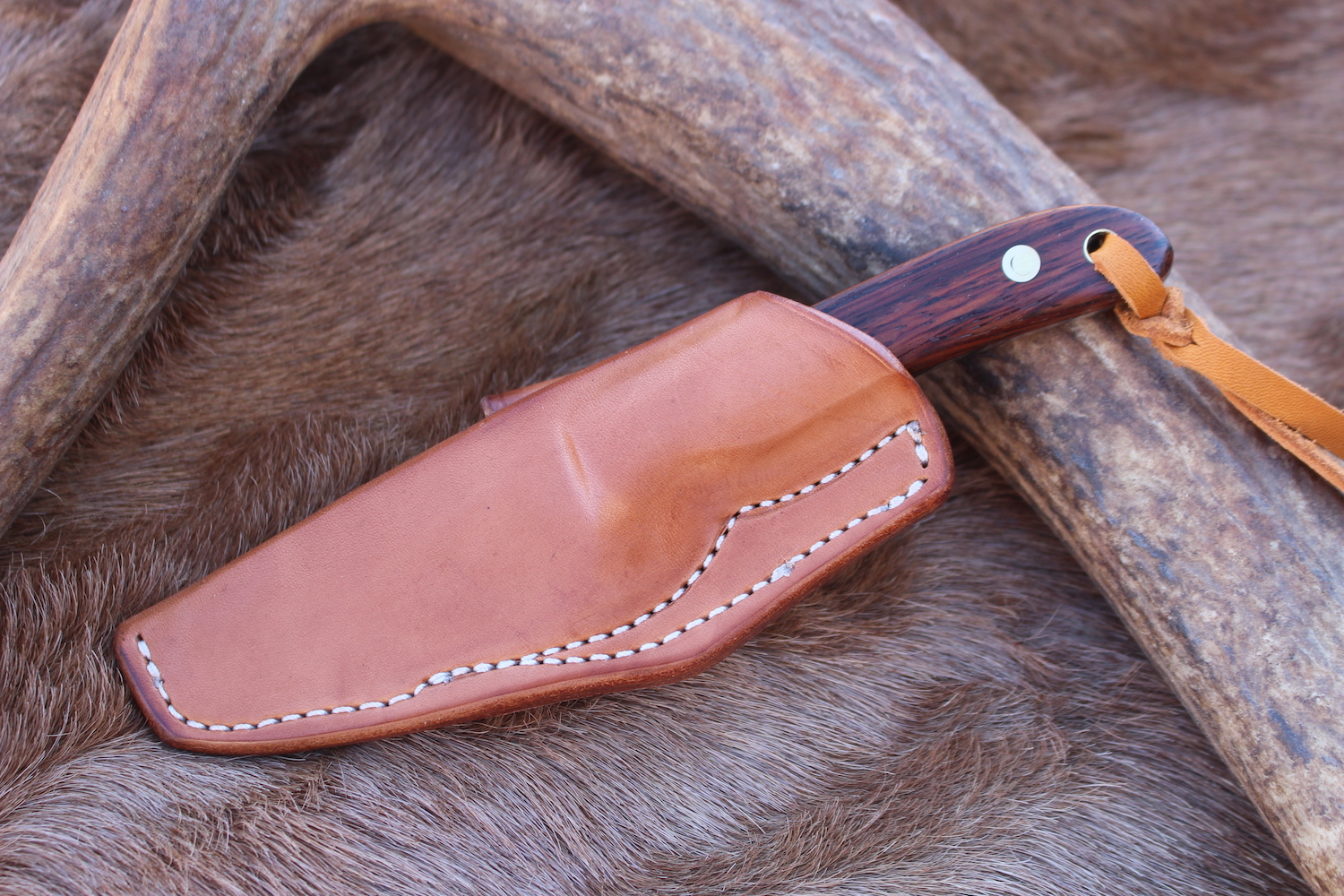 Made up another one as we were getting ready for a show: 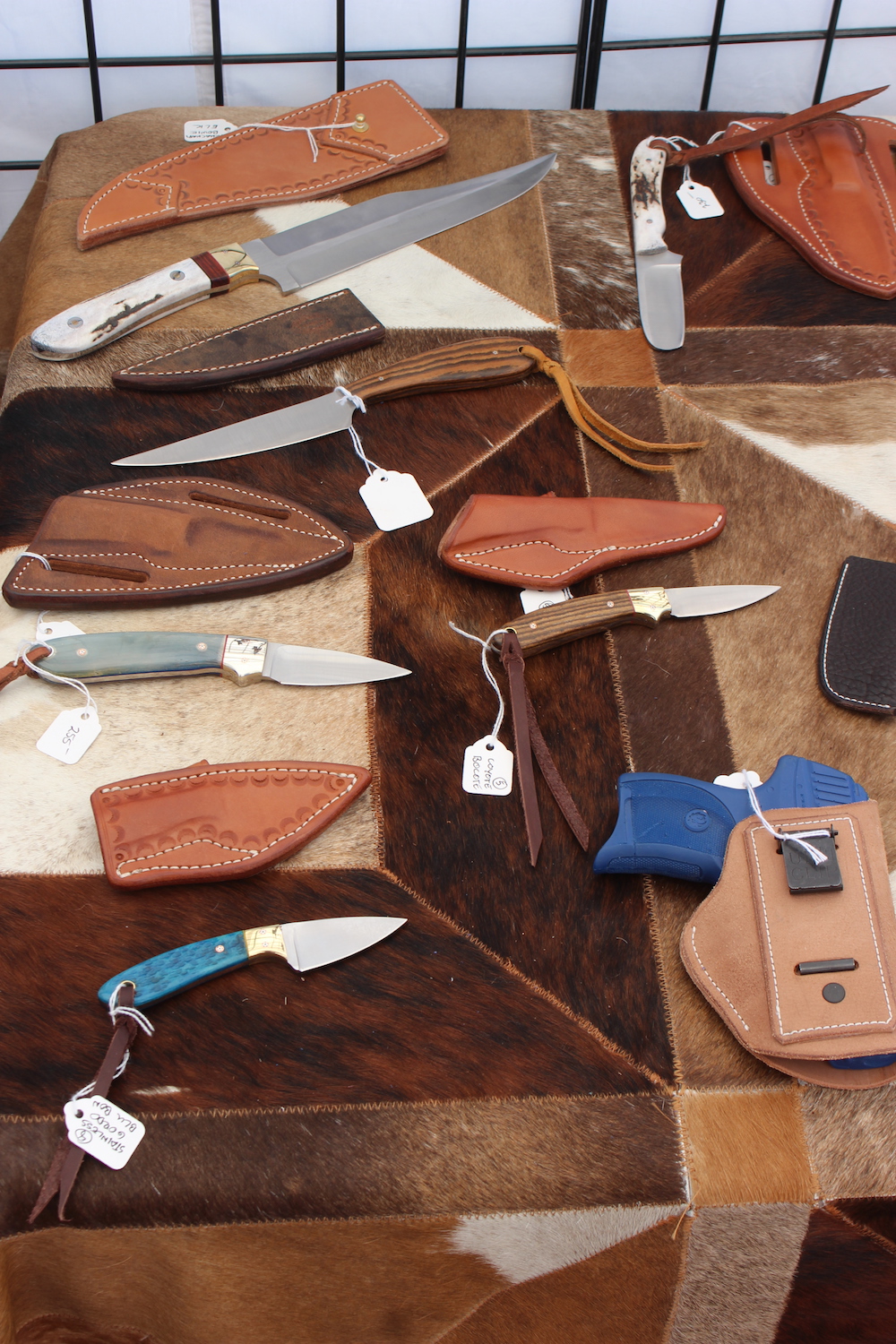 Wasn't a lot of folks at the show, so sales were SLOW. Brought it home put it on the website and dang if it didn't sell overnight again.

So anyhoo I make cowboy knives, its what I do. Finding out not all cowboy knives need to look alike. Whadya think? Questions and comments always welcome. 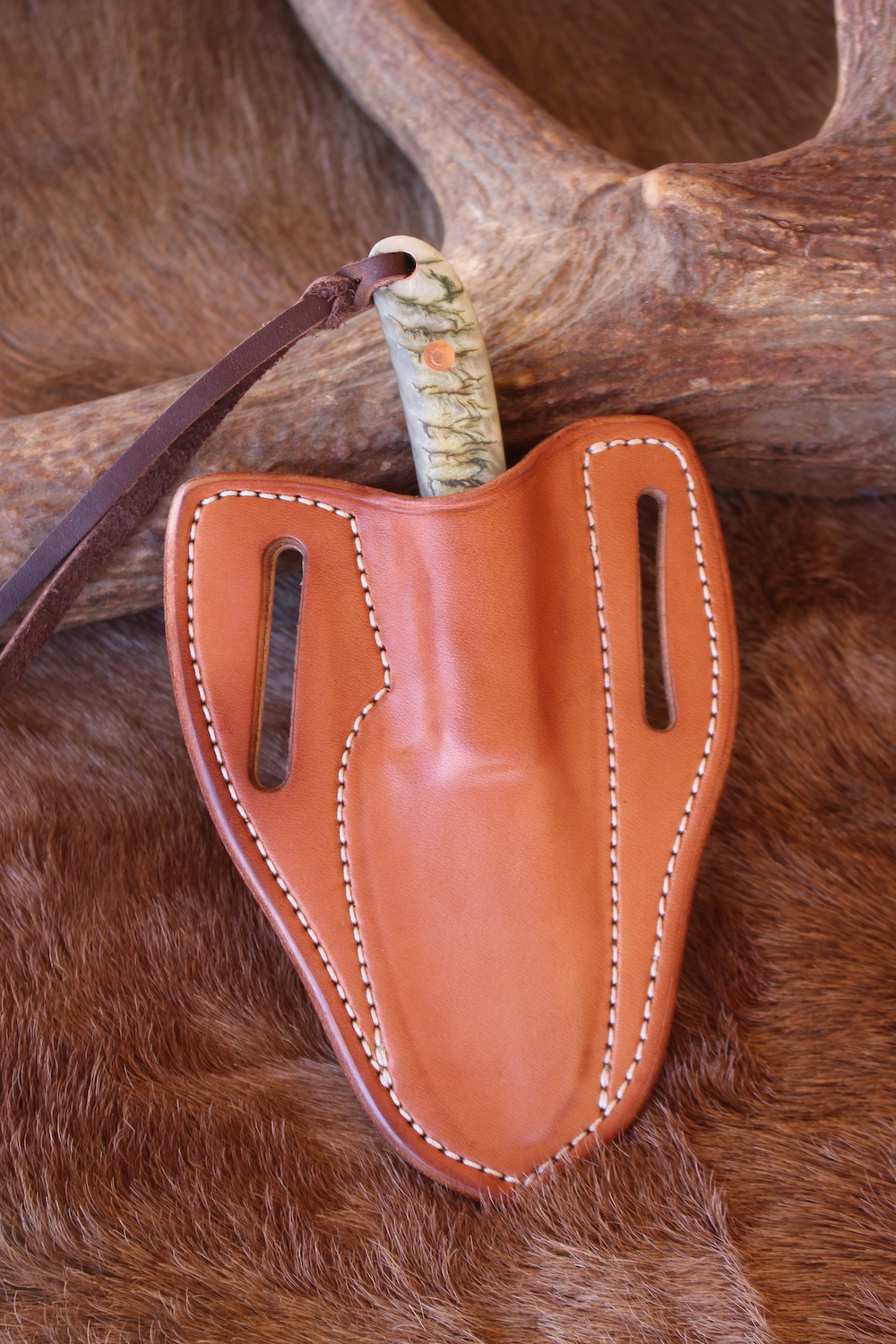 I'm no cowboy, and I'm much more likely to get speyed than to spey another animal. However, I really like the looks of that knife. I'm a fan of the spey blade, and find that I rarely use the pointy tip on a knife. I doubt I would ever carry a fixed blade with no tip at all, but if I did I imagine I'd like it to look something like that one.

On a larger note, I love that you were willing to listen to your customers and not be set in your ways. It speaks volumes that you could put your pride aside and believe that despite your years of experience you still had something to learn. Good on you.

Awesome post and photos. Though I've never speyed an animal either I have used Spey blades a lot and really like the style. Though the knife is a special-use knife, I could it being very desirable for a lot of sporting purposes: any time you have use a knife while moving such as on a boat or when you will be cutting a lot without looking such as when fishing.

Looks like one heck of a peanut butter spreader as well!

Cory Hess . I love your insights into your world, Dave, as it is a world so far different from my own that it sometimes seems like a movie.

Here's one out of left field. I'm betting those would make a great kitchen knife, maybe just with a little longer blade. After all, even Cowboys gotta eat.

Awesome thread, thanks for sharing. Your life is fascinating to me.
S

This thread is very interesting, thanks for sharing.
A

What a wonderful post. This is a great contribution to BF. Thank you for sharing!

That's quite a knife you designed, and I'm glad you're finding a market for them.

(As a math guy, I'm curious as heck about how the estimate of a million calves cut by the experienced cowboy who designed your Tapadero was arrived at! One way to get to a million is 55 calves per day, 365 days per year, for 50 years - that's a LOT of cuttin'!! If you were from Texas, I'd say it's one of those "embellished" tales that Texans are known for. )

- great thread, thanks for sharing

Your threads are always fascinating Dave, and a real treat too I love design and working out how you can solve a problem or improve something. A lot of stuff is market driven rather than purpose driven, so it's great to see what you did with these knives. Wonderful workmanship, as always my friend

Making The World Safer For Cowboys may not be a good advertising slogan though!

Nice work, Dave!!
Buying my occasional steak from the butcher, this city slicker knows little about raising cattle. Your story here sheds interesting light on the situation, and makes it more real and understandable.

Fun read and beautiful work. The best part of this is, in my opinion, is that you're crafting knives specific to a certain function, and the people that are buying/commissioning them are using the knives for their intended function. I would think that as a craftsman there aren't many better feelings than that, whether you, yourself enjoy the final product or not. (Kind of like a bartender serving up somebody's favorite drink that you personally find disgusting). Kudos!

Nice write up and excellent knives Horsewright. Almost 60 years ago my granddad and dad and I had a small hobby farm with around 50 or so Herefords. We sure never had equipment like that, I have a very healthy respect for livestock, the very ones you think won't hurt you will kill you in an instant.

What a great thread, Dave! I have always admired your handiwork and the fact that your knives are workers, but still beautiful.
When I recently saw this knife on your Facebook page, I thought, "Well, that's not a knife you see every day!" Thanks for sharing the story behind it.

I'll echo what others have said already Dave...love the life you lead (love mine as well) just that yours is so unique and steeped in tradition.

Love your knife and leather work, as I appreciate people skilled in their trade

I have seen many knives and wondered- why is it designed like that? That's for answering that question for me about that knife!

Those knives look great to me. I manage a relatively large cow herd in Northern California. I'm not typically the one castrating, so I don't have a dedicated castrating knife. If I do cut calves it's usually just a few if someone has to step away for a minute. I like knives too much to limit myself to one knife or one pattern, so it could be a stockman, trapper, hayn helper, whatever I have in my pocket at the time. I imagine if I was the one doing a hundred in a day, I might have more preference.

Two of the guys that work for me both have custom-made, fixed-blade castrating knives and they are both the same "pointless" style as the ones you made. I can't remember the maker of either at the moment. Cowboy knife preference seems to be somewhat based on where you're from, but one of these guys is from Northern California and the other is from Texas. So, maybe it's not as regional as I though and more just based on good design for the job. I think that blunt nose would be particularly handy for castrating in a chute or calf table because you are sometimes working more by feel than sight in those conditions and it might be a bit safer. Those knives look to me like they might make a pretty good knife to have around the table at a campsite, also. I'm a new guy around here. Sorry for the long-winded first post, but thought I had something to add. Anyway, great looking knives. Thanks for sharing.
You must log in or register to reply here.
Share:
Facebook Twitter Reddit Pinterest Tumblr WhatsApp Email Share Link
Top
Change Ad Consent Do not sell my data