edbeau said:
I think the stainless knives started with Camillus. The blade I have polished but I do show some small pitting on the tang.
Click to expand...

I had some Westerns from pre-1991 were stainless.
However I much prefer their carbon steel.
The Western knives with carbon steel have great cutting and edge holding capabilities, some of the best, IMO.

Not sure what the blade steel is that was used for the Westmark line. Have a couple of those and they are stout knives.
E

Found what the blades are made of and it is 440 stainless.

I have a couple Westmark Barlows.
They were more recent knives made by Camillus.
IIRC, they were made for Smoky............which probably explains the 440.

Have a western ka-bar style black shiny blade about 8 inches in length stamped western boulder colo. pat'd. It is longer than my 7 inch mk2 usn by an inch. has leather handle . Trying to date this. Wanted to post a pic bt couldn't see where to do it.
S

Sounds like the knife on the right of this picture.

Just got two knives my father had. One was a ka-bar mk2 usn which I was able to relatively date. The other is a ka-bar also but made by western. It has an 8 inch blade black and shiny and is marked western Boulder, Colo. Pat'd. Also has a leather handle but is solid not ringed like the usn mk2 and is also full tanged. On the pommel it has two marks where the tang is secured. By marks I mean where the tang comes thru and is flattened or secured. I am trying to date this but am having some issues. It is marked as stated but has no pat. no. just the pat'd. Maybe 1930-1950 also has a leather sheath that is rivrted.
B

Pat'd appeared on the knives before the actual patent number. IMHO I don't think that the eight inch blade G46 was around before WW2. The patent applies to the double tang design.

Western produced the G46 before WW2 , but per Mr. Harvey Platts's The Knife Makers Who Went West (reference above in the earliest posts of this thread) only in 4, 5, and 6 inch models. The G46-8 was a wartime only model. The first ones had WESTERN over Boulder Colo over PAT'D. These had red spacers. Later versions had black spacers. At some point, the PAT'D was replaced with the whole word spelled out as "Patented".

There is no specific data available on when which versions were manufactured, just the sequence. Also unknown is if the G46-8 was produced AFTER the war using left-overs.

In the mid-50s, the knife was produced as the L46-8 using a heavy brass, rectangular, double guard and the typical hunter pattern bird-beak pommel, an innovation of Western in the late 30s. In advertsing, it was called "The Big 8".

Sometime between 1970 to 1974, Western started introducing what I call the "calf's foot" pommel. They also came out with wood handled and Delrin Stag handle versions in the 80s, also with the calf's foot pommel.

An interesting tidbit is that every stag handle 46-8 that I have seen is stamped W46-8. Per Western's naming convention at the time, the model number should have read H46-8 or 646-8, but I have never seen one with either of these stamps. Still looking though.

Curious, was the W46-8 with the stag handle a date coded knife from the Coleman period, letters H thru O? It wouldn't surprise me at all to see that mis-identification of the handle material during that time. Coleman stuck with the date coding but they didn't stay true to the stock number system.
Also I'm wondering if you've come across an L or W 46-8 with the markings on the guard? This is one model I've yet to see an example of.
E

That will be hard, sac troop because you don't see L or W46s much on the bay. I have seen bowies on the bay that had the markings on the guard. My W46-8 is a "N" so it is on the blade.
S

Ed would you happen to remember if the guard marked x46's were birds head pommels or calves hoof?

My dating it that way is based on these "facts

On the calf foot pommels (CFPs), the earliest appearance of those in TKMWWW is 1960 reprints showing the F14 Black Beauty Camp Axe, stand alone and as part of the F3914 combo. The marketing literature called it a "Form Fitted Grip".

The next appearance in print that I know for the CFPs of is the 1975 Western catalog that edbeau has on his web site. I think it shows a W36 or W38 with the calf foot.

The earliest non-BB F14 example of the CFP that I have is on a pile marked L46-8. The last pile marked knives were made in 1967ish as the mark shifted to the guard in 1968 (above). I assume it is 1960 to 1967, based on the BB-F14 info above. I have considered the possibility that on the 46-8, rather than developing a guard stamp for it, they just continued with the pile marking OR they may have had so many already in stock, they just didn't make any for a few years.

The pile stamp model number "MAY" have gone on as late as 1976. More digging and guesswork.

More BB tidbits U have gleaned ::
The 1960 Catalog sheet refers to the BB's aluminum and plastic washers as being "famous", implying they had been out a while and were big sellers. The BBs don't appear in the 1950 reprints. I have never seen a BB w/o a model number, so the earliest they could have first appeared is 1955ish, when model numbers started to be included as part of the stamp.
Last edited: Sep 26, 2014
S

For your consideration, a 649 that is marked BOWIE and doesn't have the stock number appear anywhere on the knife. I suppose we could conclude that this knife must have been made prior to 1968. However I think it's just as probable that the first of the W49/649 guard marked knives made were marked with BOWIE instead of the actual stock number, contrary to what is printed in the catalog. At the end of the day, "I just don't know".

I have one of those as well. I have always figured that it was a case of the assemblers using up guards that had already been stamped when the S-649 blades started coming out and would be a late 67 or early 68 version. Or not.
E

My oldest catalog (1975) is a booklet called Western Knives and Knife Nostalgia. Inside the front cover is a picture of all the Western knives at the time and shows the W46-8 with the "calves hoof". There is no "L" shown at all or a 6" model. The booklet is posted on Larry's site.

here is a link to the western catalogs that have been shared with me for the site. 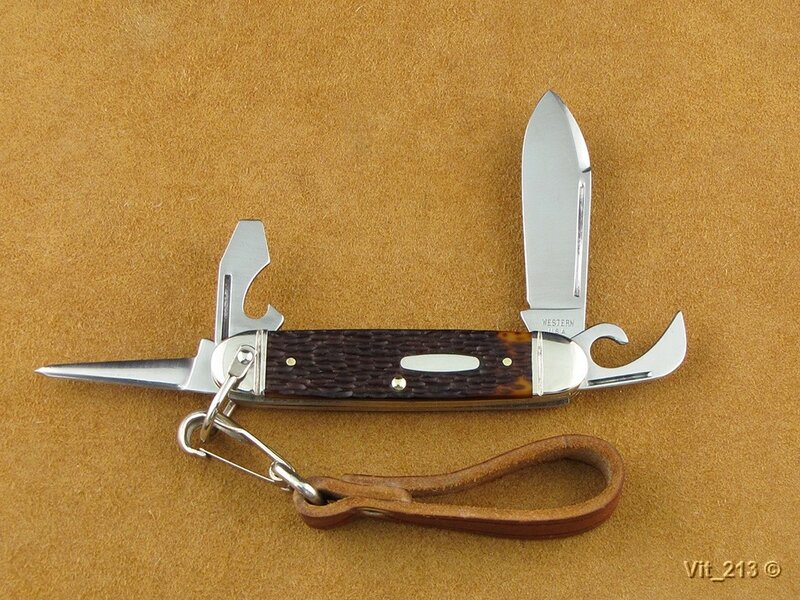 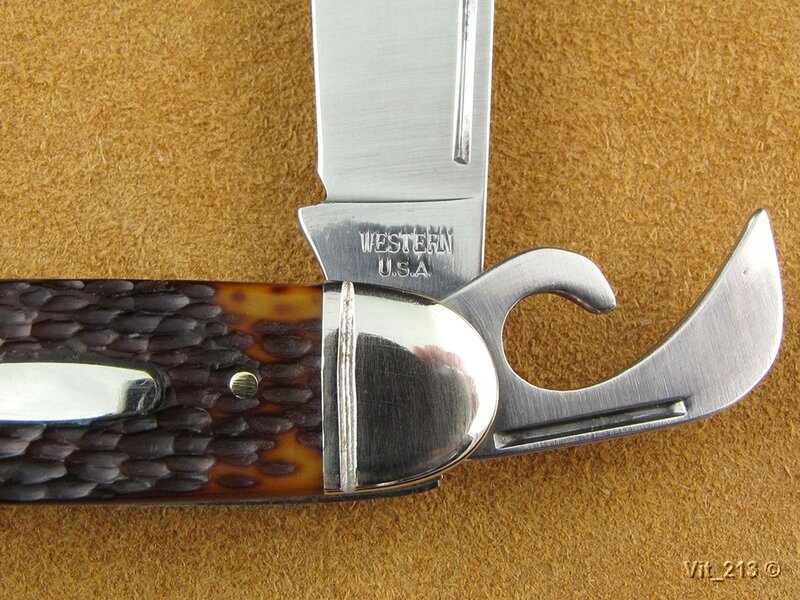 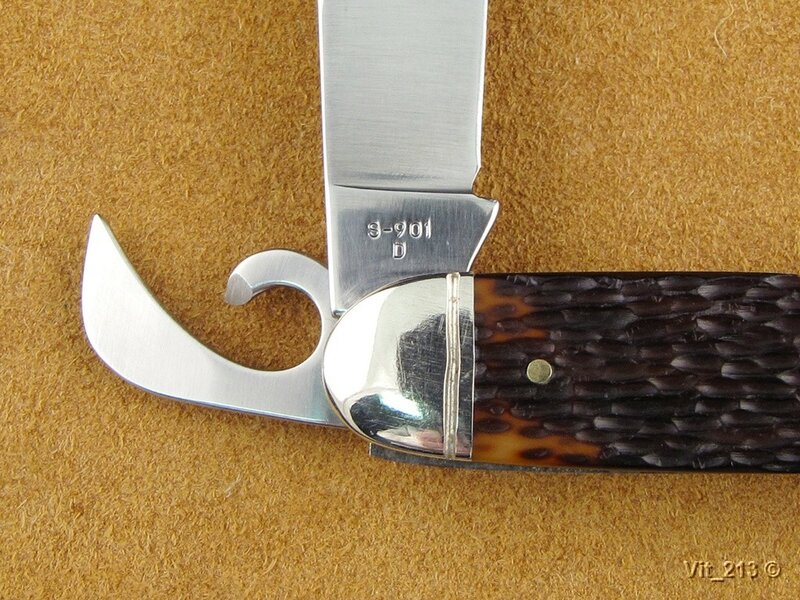