When Camillus bought the name, they dropped the date codes.
D 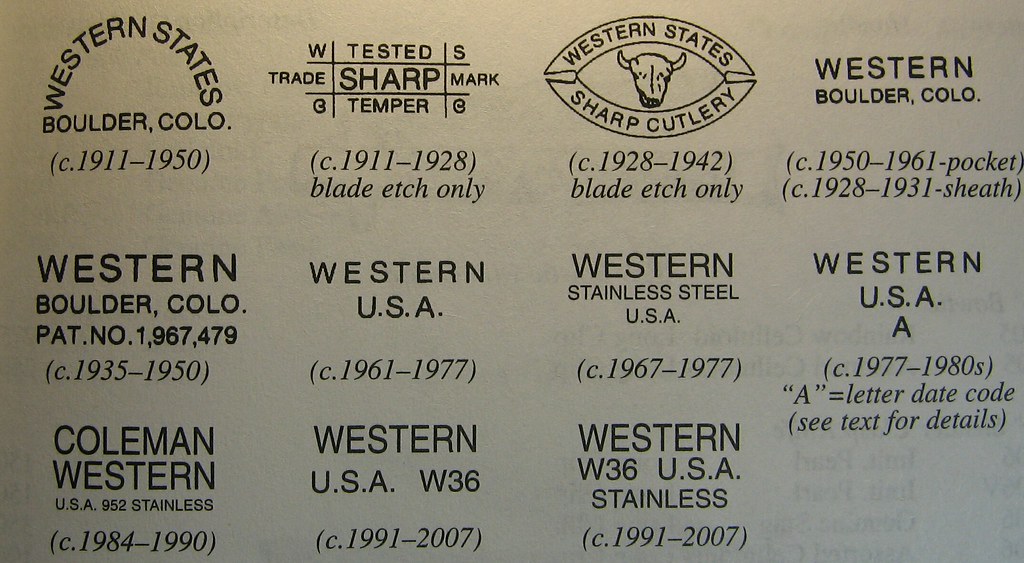 Since everyone else is posting charts from books
I'm 99.99% sure it falls under the "for criticism" clause in The Fair Use Act

for purposes such as criticism, comment, news reporting, teaching (including multiple copies for classroom use), scholarship, or research,

Having trouble finding this stamp date. Similar to the '35-'50 with made in USA instead of pat number.

With no patent number reference, it is generally considered to be post-1952. Some variance here based on some unknown model criteria.

Need a little more information = and a few more pictures would be great. If there is no model number, I can still tell you what the model is based on a picture of the overall knife and a blade measurement.

Is there a model number stamped into the pile side ricasso (the opposite side from what your picture shows)? Yes or No

Is there a model number stamped into the brass guard? Yes or No.

If the answer to both questions is NO, the the knife was made between 1952 and 1955, most likely.

If the answer to both questions is YES, then you have a fake. Or is is a Frankenknife, assembled with bade and guard from 2 separate knives. I almost did that once when I was working on replacing the leather washers on some old knives that had been abused. I caught my error before I replaced any pommels, though. Learned NOT to work on more than 1 knife at a time from that incident.

Model number on ricasso, yes. No marks on the guard. It is an L66 model. Thanks for the info.

That would be a 1955 to 1968 knife and sheath, assuming the sheath is original to the knife, since the model number is stamped on the pile side, with Boulder on the mark side.

I have never been able to track down the period when Western stamped both WESTERN and the model number on the sheath, as shown with your sheath, but I have always leaned towards sometime between 1955 to 1963. That OPINION is based strictly on the fact that I have never seen that sheath stamp on a knife KNOWN to be a post-1964 knife. I have to also say that I have seen relatively few of those stamps on sheaths, so I ASSUME that it was a short-lived period in Western manufacturing. Probably victim of a "cost reduction action".

No the answer was YES to the first question. L66 is the model number, in this case also (stock number), of the knife.
Pile side, also; file side, reverse side, obverse side, I'm sure there are others, refers to the knife when viewed from this perspective.

Not to be confused with the back of the knife, which would be this, the side opposite of the edge;

The perspective of the front of a knife, most often referred to as the name side is this;

Those that have been around here a while know I have a couple of the wooden handled fixed blade Westerns. Actually I have all of them. This is the first leather handled Western knife I have. Will take a bit of TLC to get the blade looking better. I do have 2 of the wooden versions. No markings on the knife as far as model number. I guess L39.

2 sets of red spacers indicates post-WW2 on the L39.

Introduced in 1941, the pre-WW2 version had 3 sets of red spacers spaced about an inch or so apart with the middle set in the dead middle of the handle. The model was not made during WW2.

Thanks for the information, guess I got a good deal for $20.
E

I am back with what some of you will think is a better looking knife. I know that there a few that are into patina and all that but I am not one of them.

I had this for a short while. It required only a little work on the edge. It is a W742 with a J in a circle on the main blade. It is a very hefty 4" stockman.

I have a knife like C Brant's above, it just says F66 in the same size lettering as his on the ricasso and no other markings or stamps anywhere. I found it years ago without a sheath, and am trying to figure out if it is an actual Western or an imitation before I purchase a sheath for it. I'm impressed with the blade durability and the knife appears to be well constructed and stiff, even though it is quite worn and with pitting on the blade. Are there any clues to look for to see if it's an authentic Western? Thanks in advance for any help.
A

Further inspection with a magnifier revealed that somebody took a grinder to the Western stamp on the Ricasso of my knife, but I can still faintly see the R and N in WESTERN, along with the O in COLO. It's an authentic 1951-1960 F66! Any recommendations for a sheath? Thanks for all the info.