ChazzyP said:
though I'm unclear about which side of the knife (bolt side?) was touching the stove.
Click to expand...

CPP said:
The non-slotted side of the pivot on the lock-side
Click to expand...

Well, that certainly makes sense as the idea of putting the CF on the heat source makes me cringe. I would think of that as the "nut" side.

ChazzyP said:
I would think of that as the "nut" side.
Click to expand...

That's what I meant, this social distancing is limiting my vocabulary!

CPP said:
That's what I meant, this social distancing is limiting my vocabulary!
Click to expand...

Maybe your mask muffled your message and I just didn't hear you right.

Haven't tried anything yet. Still undecided on my next step. Don't want to make a mistake with a limited production knife.

Mr.sig239 said:
Ok. Need some help here. Can't get my Doctor Death apart. 5 minutes with the hair dryer blowing on the pivot screw full power. Screw is so hot I can barely hold my thumb on it and all I have is a destroyed penny!
Tried putting side tension and every other idea I read here. Now what? Thumbs are sore and knife is still together! Do I dare trying my mini torch? Don't want to hurt the knife.
Click to expand...

Mr.sig239 said:
Haven't tried anything yet. Still undecided on my next step. Don't want to make a mistake with a limited production knife.
Click to expand...

Sorry you're still feeling stuck. I get that you don't want to bugger up your RDD.

Part of the reason I stopped using coins on my Shiro's is that it's hard to get enough leverage with something small to break tight or locked screws. Same goes for my hedgehog tool. The best results I've had are with a good fitting WIHA driver, its tip protected by electrical tape. With a substantial driver handle you can generate much better torque to break the bond. I posted this pic here back in March.

I just broke the thread locker bond on my Biryukov Sigma and had a better result using the hair dryer on the screw side than on the receiver. I don't know if that makes a difference or if it was just because I got it hotter or it was my second attempt. For free-spinning pivots I have a small piece of slip-stop rubber I keep in my kit, put that underneath the super-hot knife for resistance, and push down hard on the knife using a pot-holder or similar. Again, @TRfromMT 's tape method is interesting and my RDD is fine after

CPP put it on his stove.

About to make my next big purchase and would love some advice from people who have/have handled the two I'm looking at. Previously owned a 95t and Neon Lite. Loved both but moved them to fund gun purchases. Looking to pick up something new as a permanent part of the collection and have settled between the F3 NS and the Hati R. Would love to hear opinions on these two. I think the F3 NS is pretty sexy but have never handled a Shiro liner lock. I have heard the Hatis aren't quite as smooth, especially on the close, but don't know if this is true.

Thanks for your help!
Caleb

Cleaned up the edge on the blue 95 using the wicked edge sharpener. Going to carry these two all week.Still haven't worked on the doctor.

This one for Me on Micarta Monday. 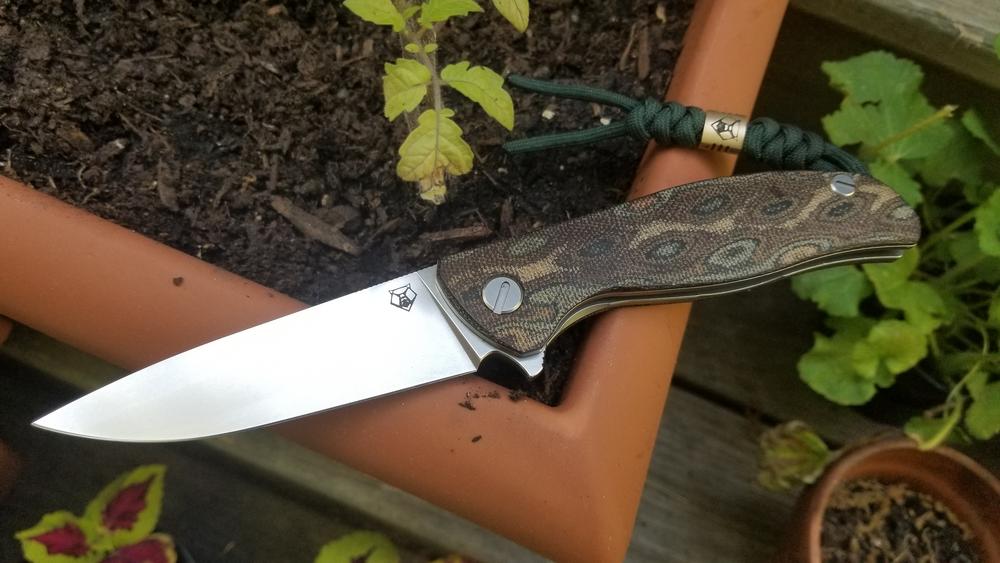 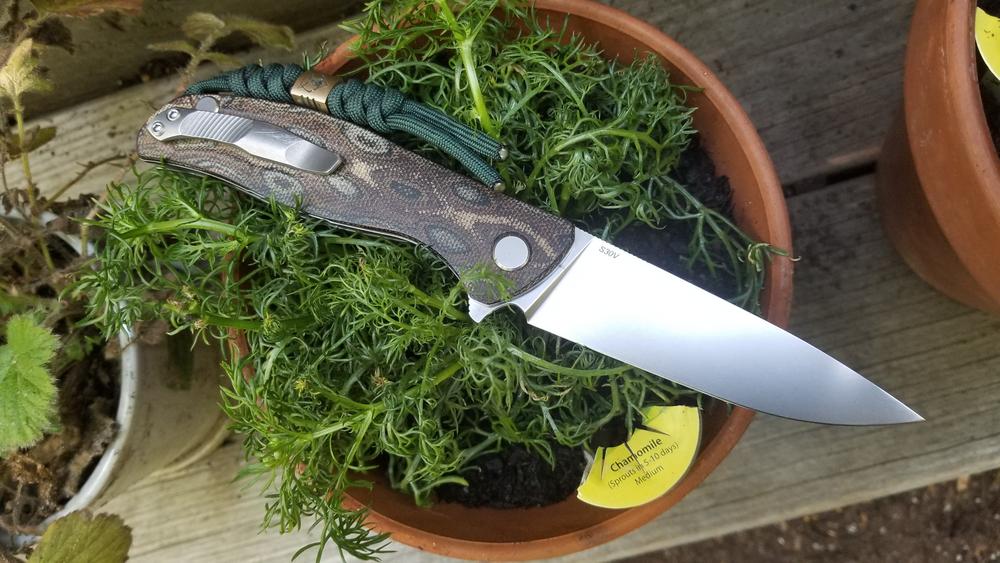 My NeOn Lite got a playmate 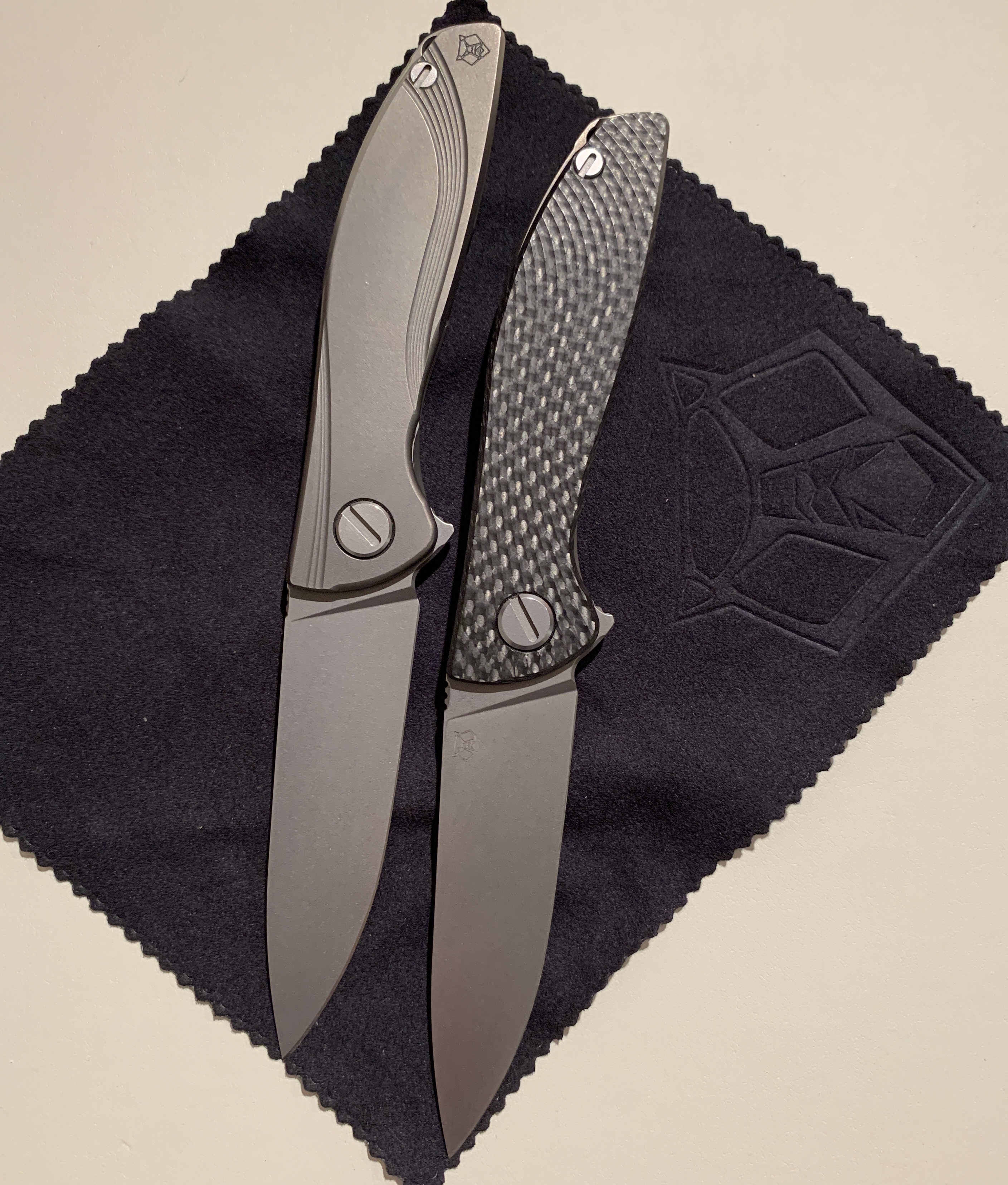 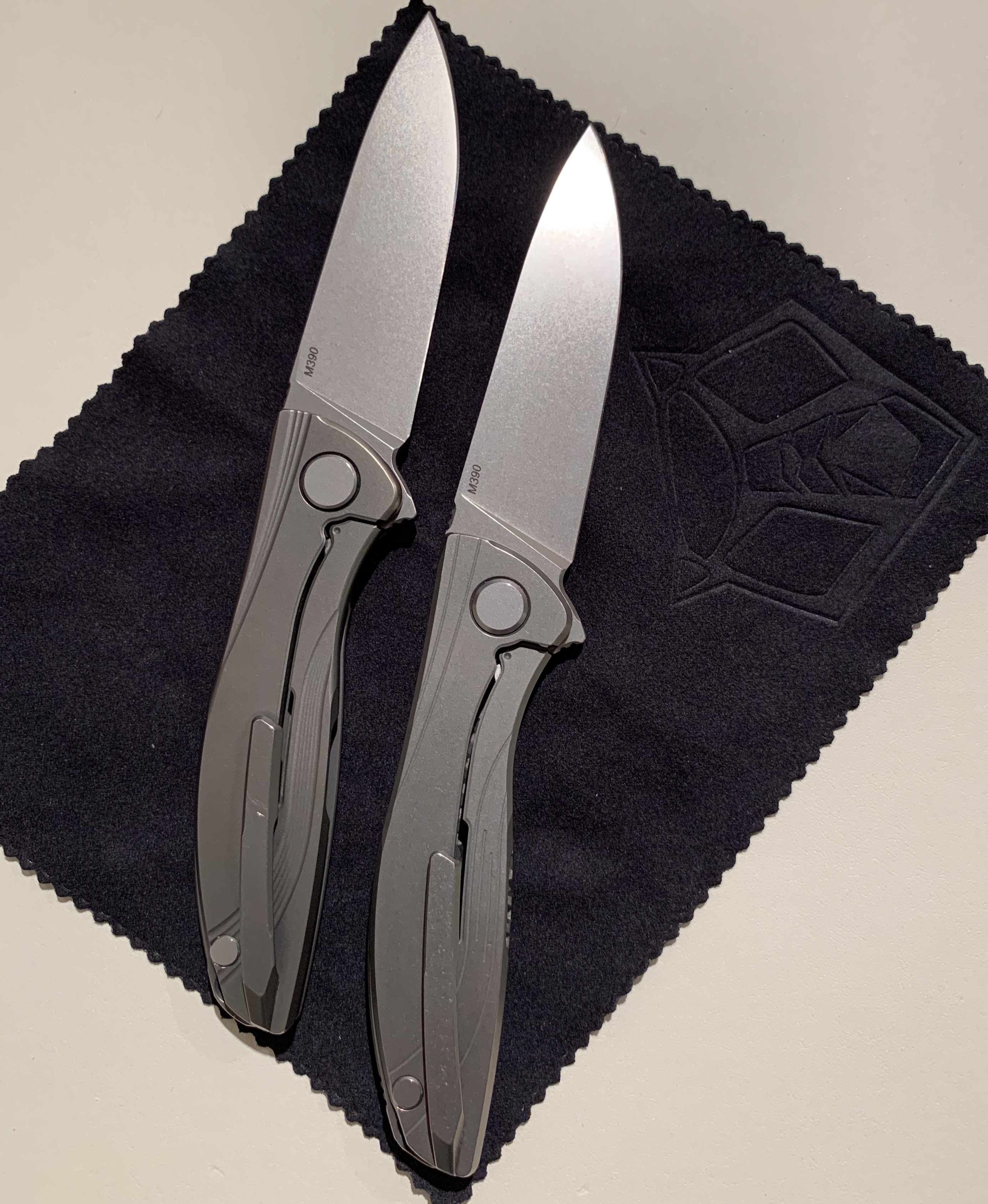 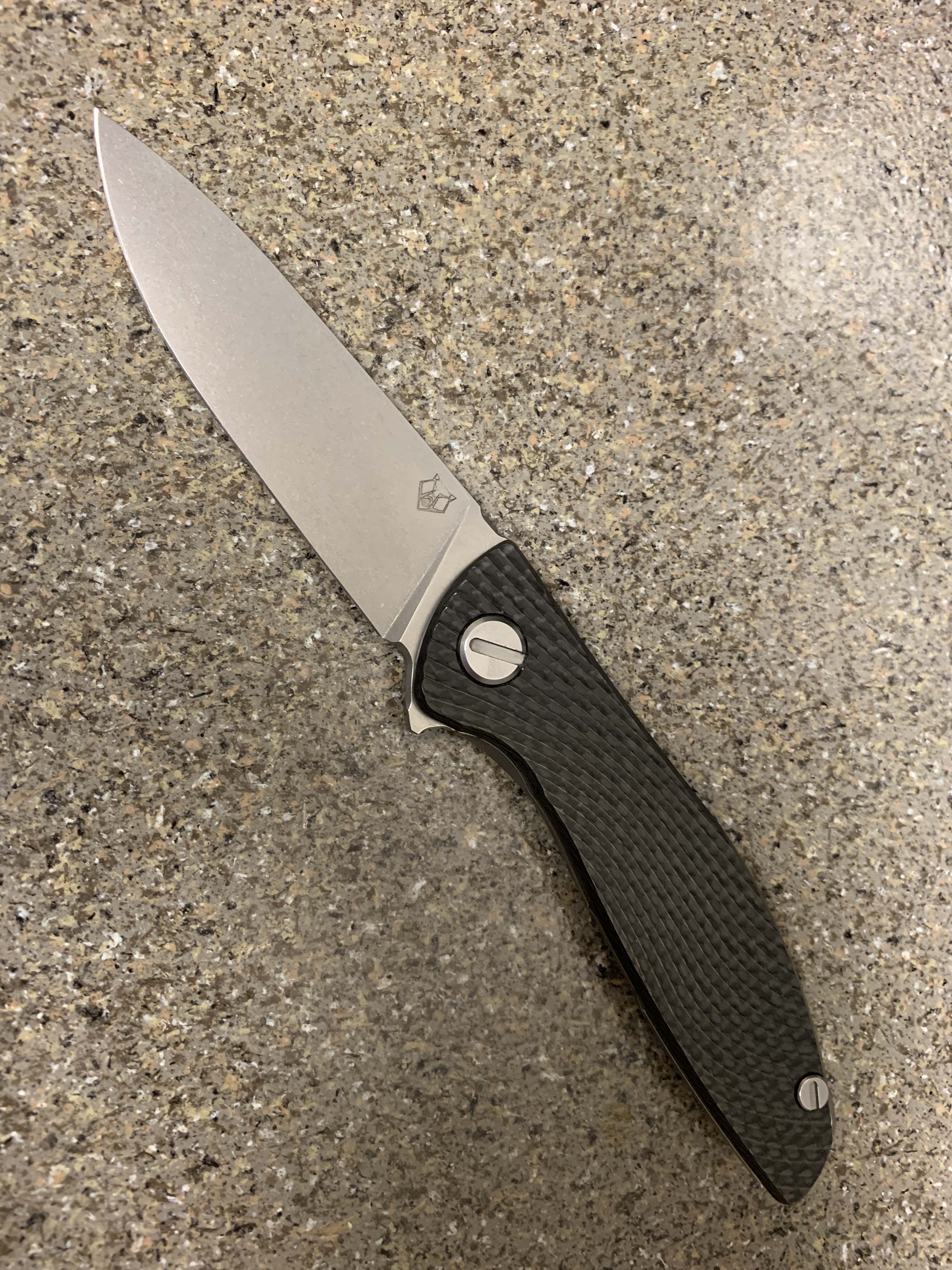 JAB said:
My NeOn Lite got a playmate

How does action of each compare?

CPP said:
How does action of each compare?
Click to expand...

ETA: Forgot to mention that the detent is noticeably stiffer on the HatiOn.
Last edited: Jun 25, 2020
E

scored this aftermarket scale in red carbon fiber and marbled carbon fiber inlay for $40 for my hati. Its pretty slick, though i only got my stock black g10 backspacer and id like to pick up a titanium one here someday. That would go with either scale cause frankly the g10 that came with the hati is exceptional.

Cleaned the knife for the first time this year for sure and used some crk grease and im getting real close to a fall shut action on washers, gonna try something much thinner next time and see how it goes. 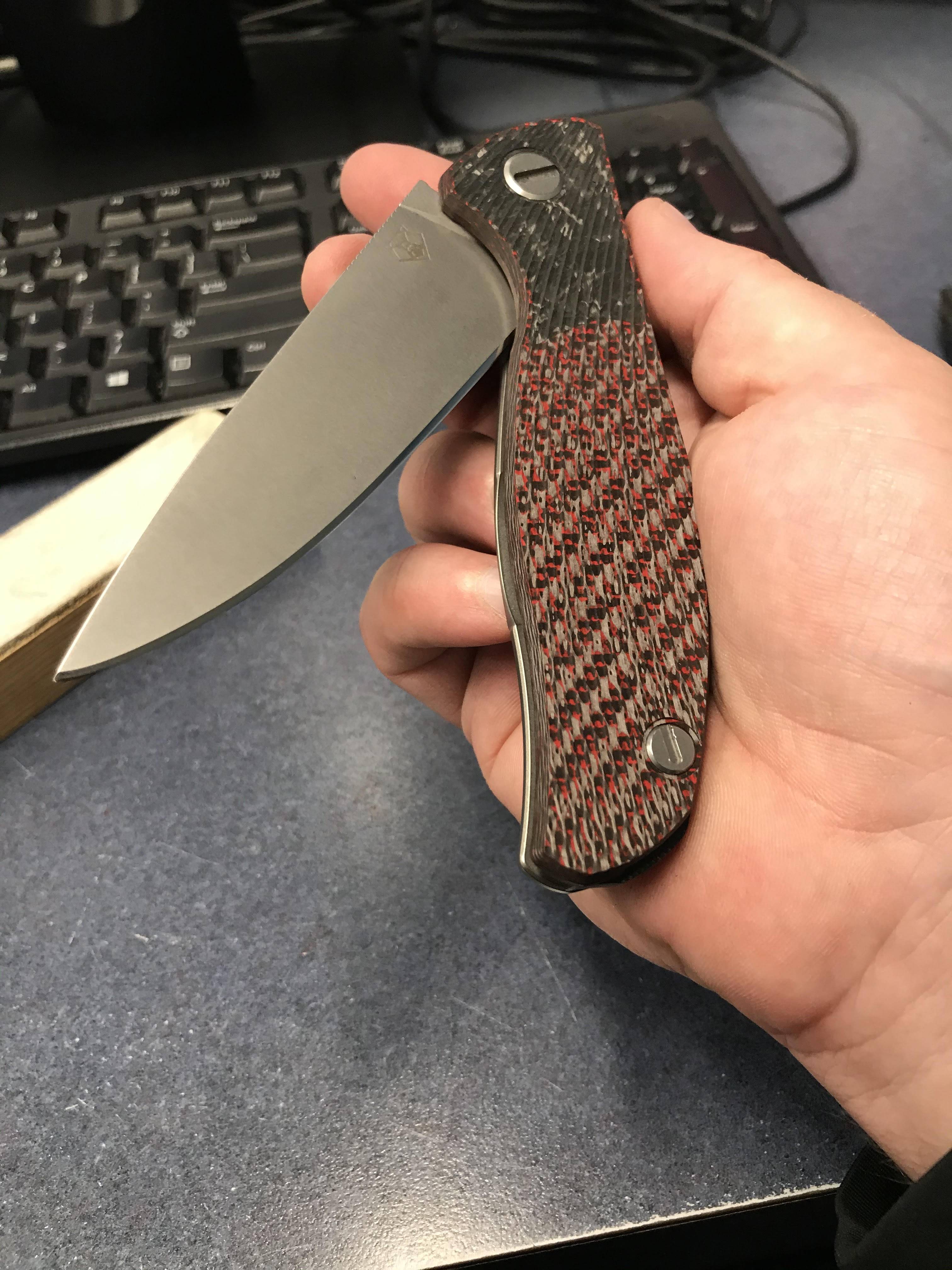 I recently sold off four out of five of my Shirogorov collaborations and kept my absolute favorite and the one I got first. I hadn't used any of the collabs but was considering using the Sigma but the reason for my reluctance was irrational; I was skeptical of the strength of liner-less carbon fiber scales. This was irrational as I use my knives appropriately. In addition, my mountain bike is made primarily of carbon fiber: the frame and the rear posts, the cranks and the rims and it takes more of a beating than would ever be asked of a knife. The final barrier to putting the Sigma to use was knocked down after discussing the matter with a certain

ChazzyP . So today, I used it for the first time. I always felt as thought the Sigma has a paring knife profile so I put it to use in the kitchen. 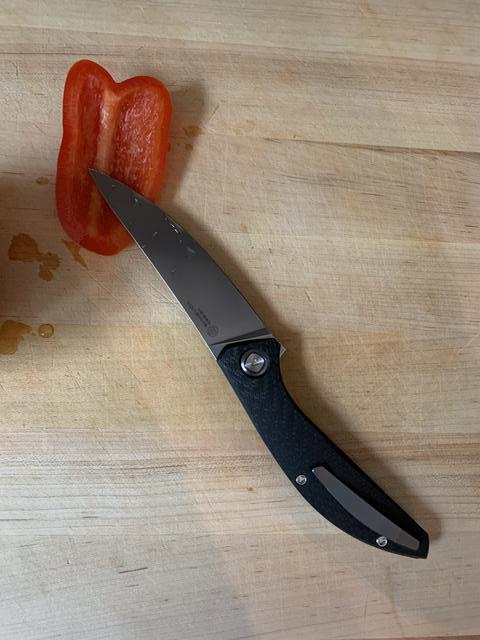 Just as I began using it, very loud thunder erupted overhead and it began to down pour. 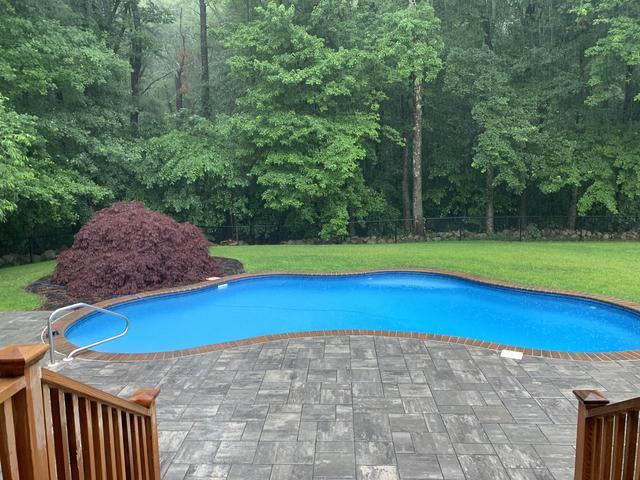 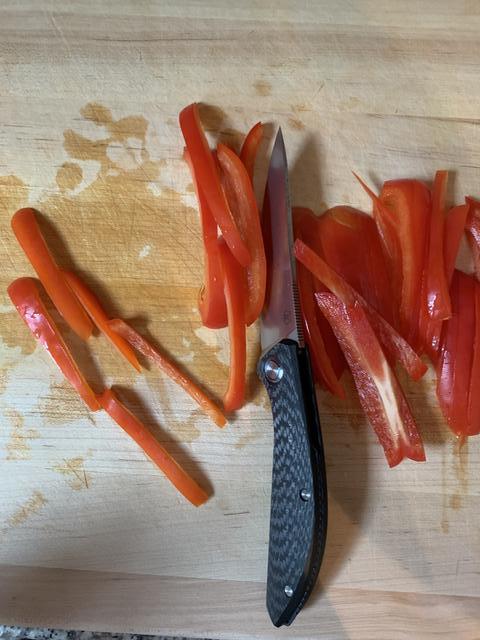 The factory edge was as sharp as you would expect making mincing garlic fun. 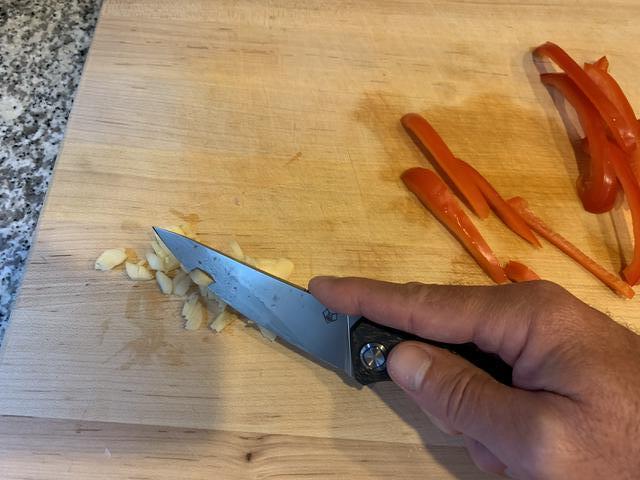 The dish, Paprika Chicken, I was making is delicious, healthy and simple and only requires one skillet. 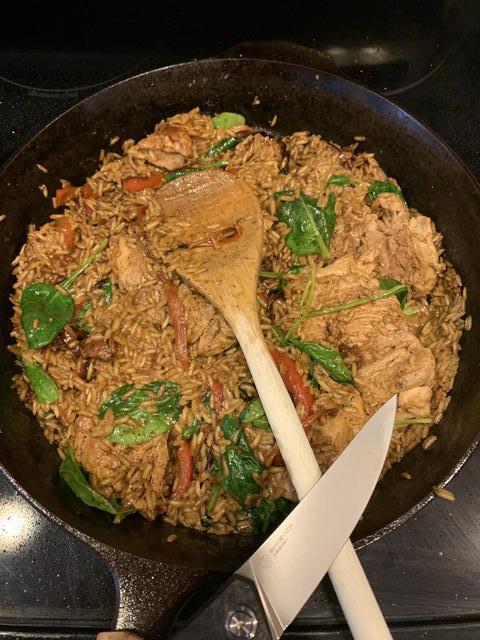 As you can see in the above photo, the carbon fiber scales were able to withstand the abuse hurled at them cutting a red pepper and two gloves of garlic.

You mean you didn't shred up that giant pile of mulch behind your pool with your Sigma,

CPP ? I guess it's perhaps a little small for that. I knew you should have kept that 111.

Seriously, though, I'm glad to see you using your Sigma. If I've got a set of collectibles--especially ones of the same ilk--I find it difficult to use any of them, as with my complete collection of Spyderco Sages, their lesser value notwithstanding. I recall mentioning after I got my RDD from you that it was really a far too excellent knife to sit in a drawer. I carry and use it at least once a week--not in work or hard-use situations, but as a regular EDC that I'm not afraid to take out to cut some stuff.

...and, as there's no such thing as too many Shiro pics, here's a few from a couple weeks back of the RDD... 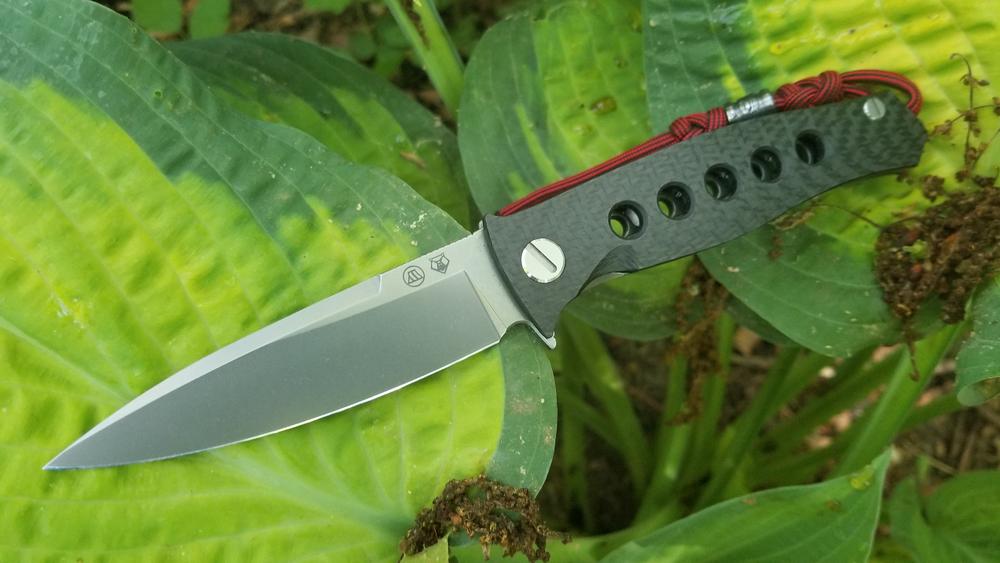 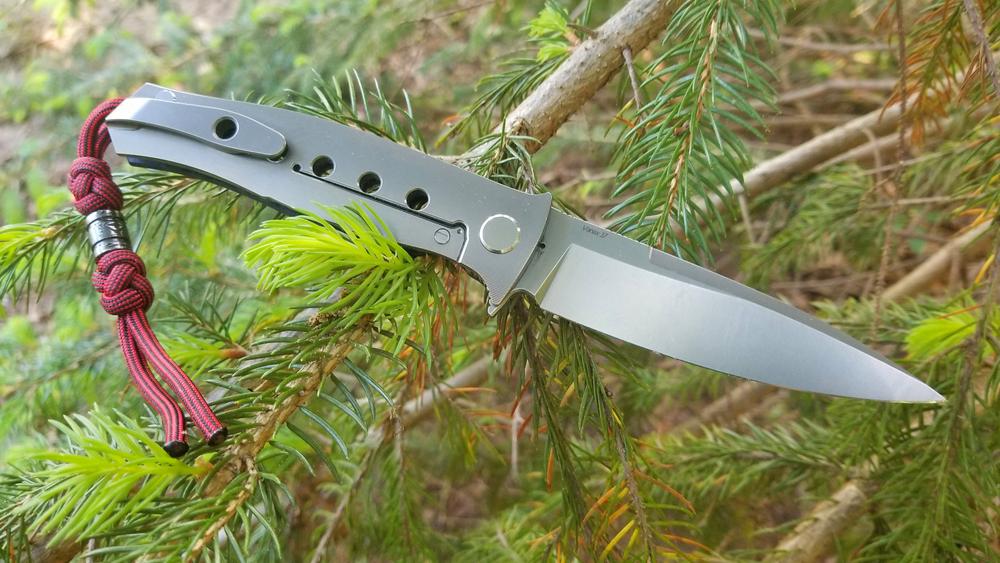 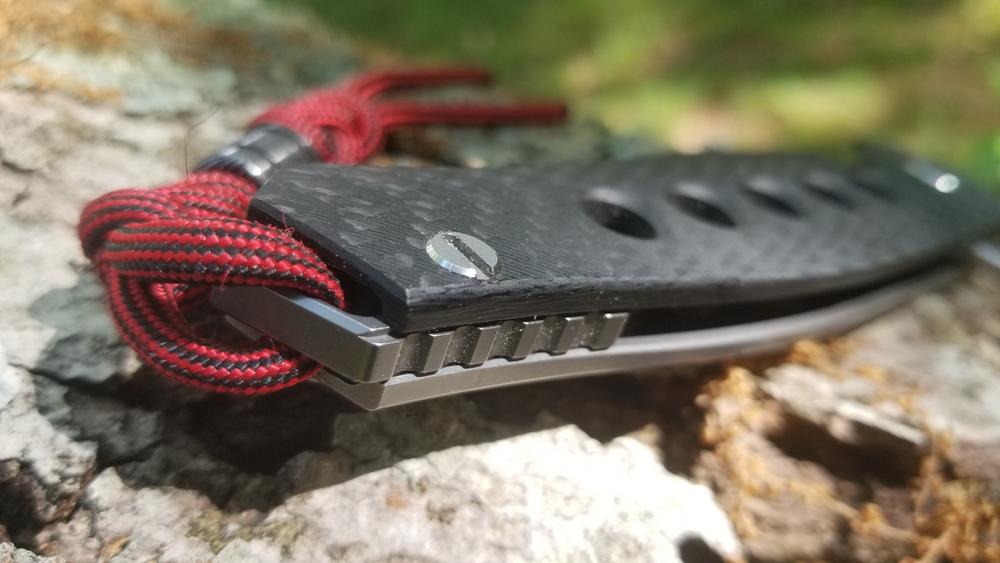 Help!!! I'm trying to disassemble my Pero with the 3 lobe screws in it. I have the proper bit - but still can't get it to come loose. I used heat in the pivot with a blow dryer - too nervous to use a soldering iron cause I don't want to discolor the pivot. What's the trick? It just keeps spinning even if I apply a little lateral pressure to the blade

I had the same problem with a Russian Dr. Death. I held one side of the pivot to the glass top of an electric stove, on high if I remember correctly. The trick is that once you've broken the adhesion of the thread locker no force is needed to loosen the pivot: more heat and less force.

CPP said:
I had the same problem with a Russian Dr. Death. I held one side of the pivot to the glass top of an electric stove, on high if I remember correctly. The trick is that once you've broken the adhesion of the thread locker no force is needed to loosen the pivot: more heat and less force.
Click to expand...