firkin, do we, or do we not have metals today that they did not have 500 years ago that would make good, great or better swords with?

Originally posted by munk
BTW, ankerson, and yeah, I'm being a little gadfly- no offense, one of your cuts was less 'perfect' than the other two; notice the jagged edge of paper?

That's the way the picture turned out when I resized it, all of them were clean cuts. That is fuzz you are seeing on the edge.

Here is another angle.

From the response I got on Swordforums they seem to like it alot.

...looks like a raised bead of paper along the left corner. Don't know if the Shogun will accept that...

Originally posted by munk
...looks like a raised bead of paper along the left corner. Don't know if the Shogun will accept that...

The reason behind folded steel is to get out all of the air pockets and imperfections. Yes it is denser because it is pounded out and folded a number of times until the smith gets it perfect.

I believe the Shogun would like it just fine.
M

y'all are pretty funny...

Slow day at the office?

Originally posted by Ankerson
...The Wakizashi is one handed, kind of like a short Katana with a 20" or so blade.
Click to expand...

This would be a great addition to the HI line, don't you think?
(with handle instead of wrap)

Originally posted by pendentive
y'all are pretty funny...

Slow day at the office?


This would be a great addition to the HI line, don't you think?
(with handle instead of wrap)
Click to expand...

About Steel. I took this from here:

Our exclusive use of the superior and difficult to come by Swedish Powdered Steel assures you our customer that your sword is made from the very best material available. Some of the best sword smiths in Japan use this steel on blades costing in excess of ten thousand dollars. Paul Chen, because of his knowledge and integrity, is one of the few to have access to this steel.
Click to expand...

Great; now the Swedes are in on the katana. Naturally, this powdered metal is as difficult to come by as diamonds from South Africa. Where is Ruger when I need him? Maybe he could cast a superior Katana. Just kidding. The Late Bill did once say his casting was stronger than an equal amount of forged, but he was talking gun steel. If anyone has ever tried cutting through one of Ruger's firearms you know what he was talking about.

That's quite an impressive site.

Originally posted by munk
If anyone has ever tried cutting through one of Ruger's firearms you know what he was talking about.

I have cut through a .44 Mag Super Blackhawk that someone blew up with an overload. It was really tough.

Originally posted by munk
Great; now the Swedes are in on the katana. Naturally, this powdered metal is as difficult to come by as diamonds from South Africa.

Well the Swedes have the steel and the Swordsmiths fold and Fordge the blades into great Katanas. As they said only a few smiths are able to get it, Paul Chen being one.
M

How did they destroy the .44 Blackhawk? Not Ruger's thickest cylinder but thick enough. A number of writers have acknowledged over the years that handloaders seem to destroy more .44 mags than anything else.

I cut through a SS blackhawk grip frame once with a hack saw, and a Ruger Super Redhawk barrel too.

I noticed you could get a Katana from Chen for 1000 bucks.

Firkin destructive tests have been done to antique wootz pieces. I believe one collector in the early part of the 20th century donated quite a few of his low end pieces for destructive testing. Also accidents happen, and good pieces are sometimes damaged as well, so off to destructive testing. There has been quite a bit of study on wootz. Also something as simple as etching can tell one a whole lot about how a piece is made.

As for why to fold steel when making blades, most cultures used pattern welding to some extent before the advent of modern steel (actually wootz is a historical exception which is part of its mystique), from the twist cores of viking swords to the roughened intricit patterns of Indonesian keris. Essentially before modern steel production methods were perfected, making steel was quite a pain, and so steel was expensive. Also the method of making said steel was not perfect, so laminating was very important way to make the quality steel spread a little further, as well as hopefully refining the less perfect steel a little bit. What the Japanese did was take pattern welding to a higher level of refinement, but that was also partly due to thier own difficulty in getting quality steel. Japan was never resource rich, and the iron bearing sand that they made thier steel out of wasnt exactly the best source. So they did thier best trying to make an imprefect situation workable. Hence the Japanese sword.

As for Paul Chen, he is not a smith himself but a factory owner. There's a bunch written about him on Sword Forum International, or at least there used to be (been a while since I actually bother reading all the katana stuff). The big thing with the swedish powder steel is that its an easy way to get that damascened effect without all that pesky welding (Paul Chen steel folds em a few times but not as much as the old fashioned wau). The weakness of pattern welding is that each time you make a fold/layer you get a potential weak point as slag incursions or other defects can sometimes lead to a potentially bad weld. Bad welds arent as obvious in newer blades, but as they age and natural wear tends to make them pop up in the forms of de-lamination (point where the weld is literally coming apart). Many modern smiths have proven that modern steels are as good or in many cases superior to ancient steels. Im sure if the old time smiths in Japan could have accessed mercedes leaf springs they would have used them.

As for cutting effectiveness, Ive cut with katana, tulwar, khukris, bolo, kampilan, kris, barong, etc... Outa all of them the best cut I ever got was with a 100+ year old straight kris from Sulu. Amazing cutting feats have been done many times in history, and with many different types of swords. There are well documented Spanish accounts of Moro Warriors cutting chargin Spanish horse in half with thier Kampilans. In thier war against the Aztecs, Spanish conquestadors were seen cutting in half up to three charging warriors with a single cut with thier toledo made swords. However the stories of swords cutting through cung barrels or concrete blocks are just myths. A modern smith did experiments with that on donated gun barrels. I thing the best he did was scoring a barrel, nothing close to even cutting the barrel in half. Anyways, as has been said good steel is good steel. Its the wielder not the weapon that makes it lethal (at least if you dont listen to some of the legends of flying keris seeking out victims at night).

I figured Id throw this in to illustrate how big a pain it was to make steel in old times. Its not perfect since Im trying to quote an article I read a few years ago. I forget which culture it came from (coulda been a Japanese method but could have easily been a European method). Essentially one old method to make steel was for a smith to make a kinda clay furnace. He'd then throw in iron ore, fuel (also adds carbon), and a few other things that his own private recipe called for. He would then fire up the furnace until everything melted and ended up on the bottom. When everything cooled down what he would have would be a big lump of wrought iron of varying carbon contents. Now what he would have to do is to find out which parts of the lump had the different levels of carbon, and then break the lump up accordingly. The different pieces would then be for the different parts of a blade, the higher carbon pieces for the edge, the lower carbon pieces the sides and back. From thier he could the weld the pieces together to further refine the lumps, and make the blade. There is also a process by which to add carbon to the steel if there wasnt enough. Its called carburization (if I remember correctly), and involved adding carbon through the forge from the fuel. Ive heard its a real slow and painful method, not to mention requires large amounts of fuel.

Originally posted by munk
How did they destroy the .44 Blackhawk? Not Ruger's thickest cylinder but thick enough. A number of writers have acknowledged over the years that handloaders seem to destroy more .44 mags than anything else.

I cut through a SS blackhawk grip frame once with a hack saw, and a Ruger Super Redhawk barrel too.

I noticed you could get a Katana from Chen for 1000 bucks.

He did it with an overload, blew the cylinder and bent the top strap.

Thanks for the link, there is alot of detailed info there.


I really like this pict of the 14th century Katana. 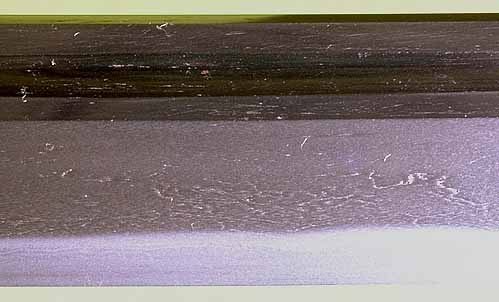 Also they explained how many foldes it would take to get a Million layers..20 foldes.