Hey guys this is my first post and trying to post an image so we will see what happens. It's a GEC Pemberton in stag

Jonny D said:
Hey guys this is my first post and trying to post an image so we will see what happens. It's a GEC Pemberton in stag

Flickr can be challenging when it comes to capturing direct image links instead of general page links.


Jonny D said:
Hey guys this is my first post and trying to post an image so we will see what happens. It's a GEC Pemberton in stag 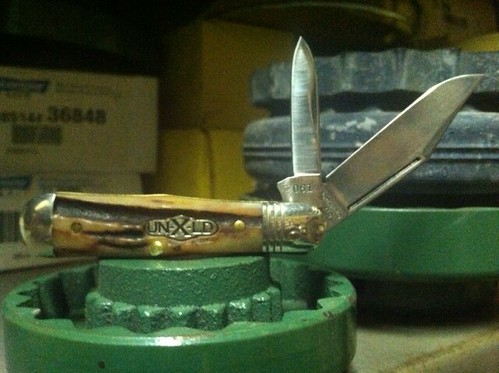 Second, in order to find that image, I first control-clicked on the broken image icon in your post above, and chose "Open Image in new tab" (right-click if not on a Mac).

That took me to this page,

I control-clicked (right-click if not Mac) the image but there was no "Copy Image URL" option. So, I clicked "view all sizes" in the upper right corner...

and on the resulting page was able to choose "Copy Image URL" when I control-clicked the Medium image there (the larger size was upside-down), after which I came back here and pasted that image URL between IMG links here.

So for you, when you have a picture in Flickr that you'd like to share here, just keep control- or right-clicking in the image you want, and/or on different pages within your account and then try the picture again, until you can choose the "Copy image URL" option, then paste it into a post here between IMG tags (IMG /IMG but with brackets around them).

Whew. I'm sure there's an easier way, but I thought I'd let you know what you're looking for.... The image link you paste between IMG tags has to end with .jpg, .gif, .png, or another actual image suffix for your picture to show up here.

(Sorry if this is too much information! Just trying to help.)

Thanks so much for joining us, and congrats on such a beautiful knife!

Thank you so much! yes I need to work on this a bit more.
J

Just a quick question but what do most find easier to use for sharing pictures?

SAK Guy said:
I wouldn't do that to a buddy!

not only are you rubbing it in!!
your mocking me!!

Jonny D said:
Just a quick question but what do most find easier to use for sharing pictures?
Click to expand...

So, today was fun, went to my mother in laws today and she was watching my niece and nephew (her grandkids) and i brought my daily companion my texas jack, but since i was going to be seeing the munchkins i swapped out the wenger SI for a farmer (wanted the saw).

Now the niece forgot to bring her sodbuster i had got her for christmas, so she was the ax bearer (my cold steel tomahawk) and we did all the expected things, we went out to the woods in the back, we cut some branches down, we made feather sticks (no fire, for some reason i was informed we have been place under a fire ban! ). I brought a fixed blade, a folding saw, my farmer and my tomahawk.

So what we learned was, how to baton, then how much easier it is to process wood with a saw, even big limbs. We found out for ourselves that a sodbuster (or texas jack) makes much better feather sticks than a bear grylls folder and why (its hard to make a 9 year old understand thinner is better, because all his life BIGGER is better). we even tried cutting some plastic bags up. All in all it was a good day and I think my texas jack is now considered "scary" sharp.

We discussed its not the tool that makes the man, but the man who USES the tool that will survive and thrive. We discussed its better to use the right tool for the job if you have that option, if not you then adapt and improvise to use the tools that you have. We discussed how the mountain men had 3 tools, a chopper, a belt knife for skinning/self defense, whathaveyou and a pocket knife for whittling, making toothpicks and other small jobs. And that no one tool will do it all, which unfortunately Bear Grylls and to some extent all the "survival shows" today give the impression. I actually invoked the grand muckba on a few points. It doesnt have to be big, just sharp and secondly Mr Van's theory that you wont always have a big fixed blade on you, so the more you learn to do with your pocket knife, the better prepared you will be for life on a day to day basis.

Anyways, i feel like a giant knife nerd..passing on knife knowledge to the next generation. I hope it sticks and helps him learn enough to make an informed decision for themselves as to what works or doesnt work for them, and hopefully more importantly WHY.

Oh and as a side note, we left with my nephew suddenly VERY impressed with his puma sodbuster, i think today really opened his eyes as to what a sharp thin blade can do if you think about what your doing.

oh and some obligatory knife pic

Ryan, great story of teaching the next generation....thank you bro! Hearing it makes me not feel so weird that I taught my grand-kids to throw hatchets, knives, files and screwdrivers.

Took the pic yesterday, but it's still in my pocket.

Edit: and this in my pack.

Jonny D said:
Just a quick question but what do most find easier to use for sharing pictures?
Click to expand...

I really like that style. What model RR is your knife?

This Oldie'n'Goldie is with me today...