Which Spyderco are you carrying today? 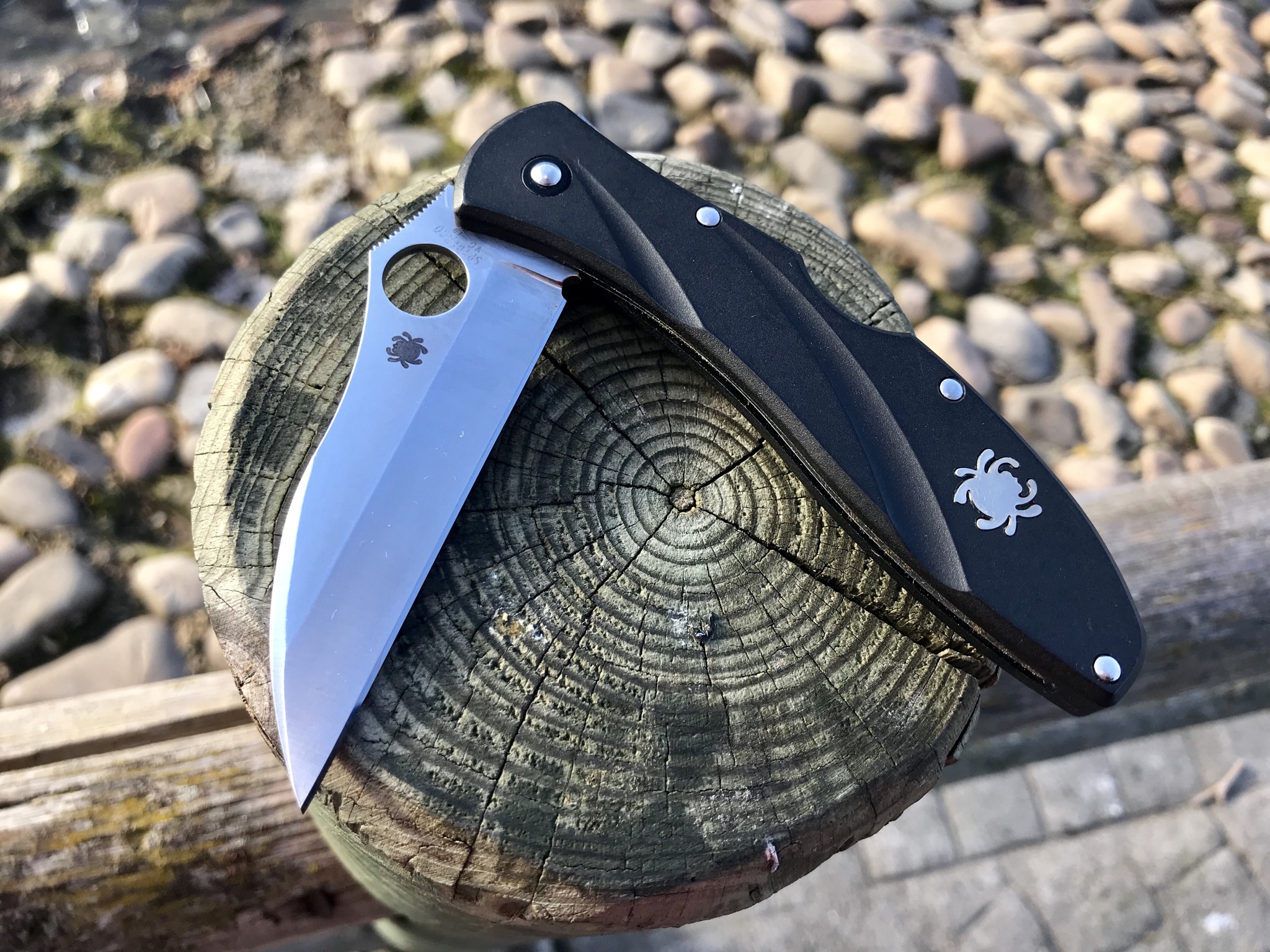 blame it on god 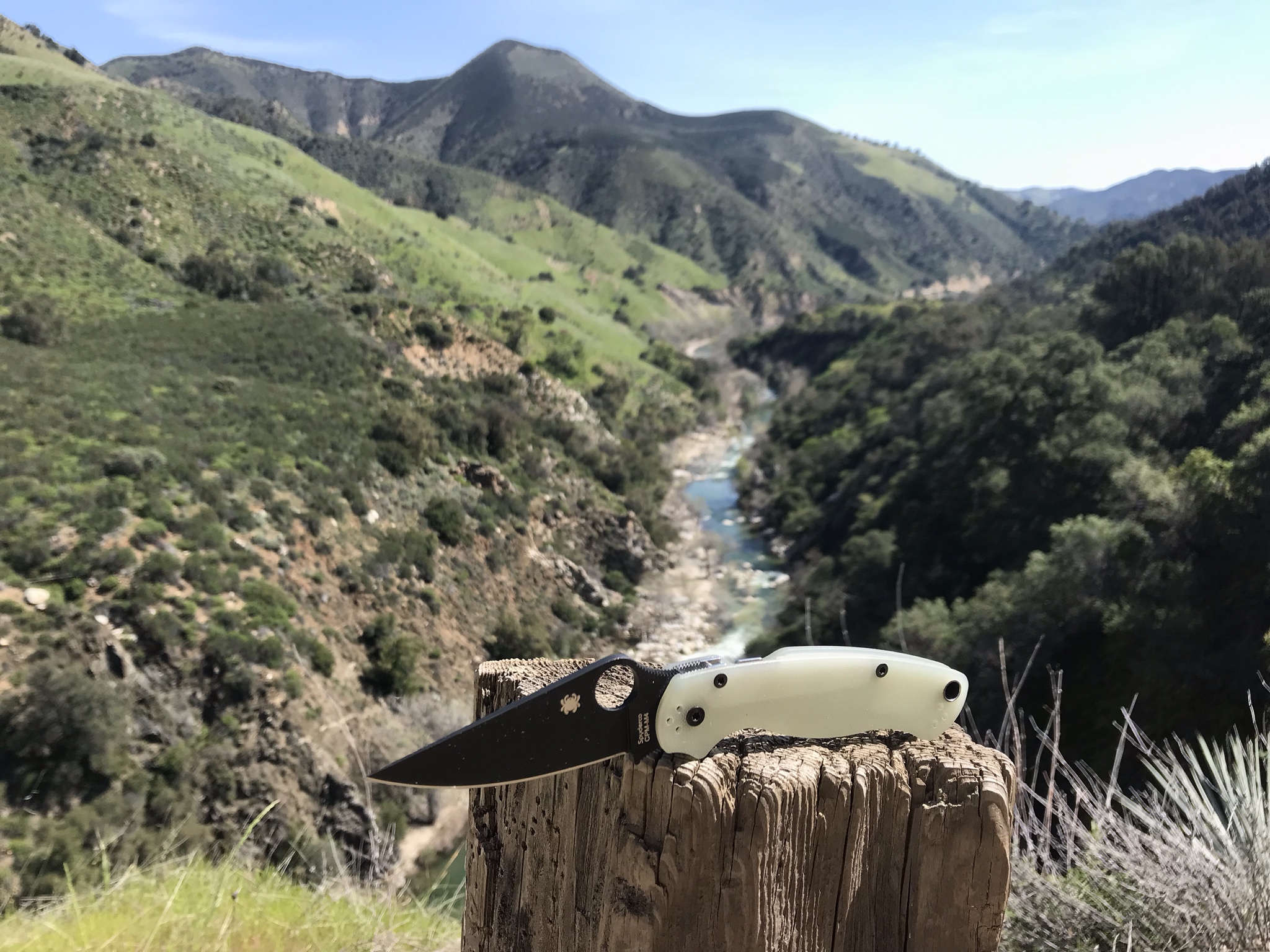 Dragonfly 2 in H1, I love pattern, it’s the biggest little knife out there. I love this steel too it actually gets harder with use. The serrations are perfect for sisal ropes and cuttin’ materials that are smooth and difficult to get a plain edge to get a bite on. 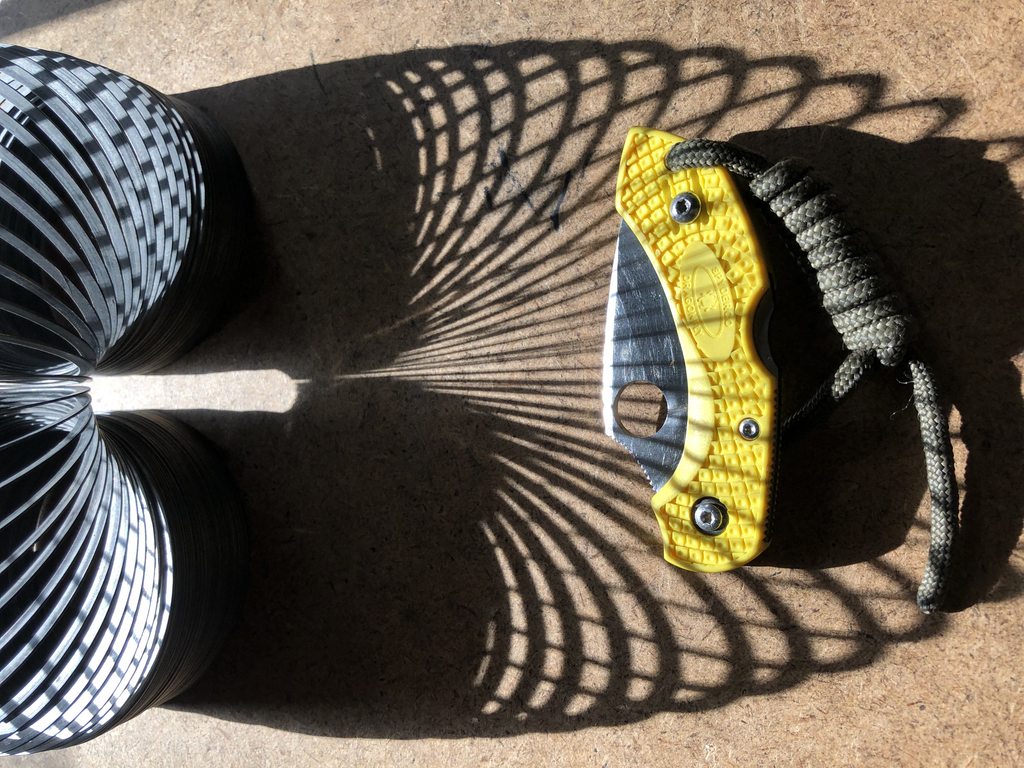 
My Mantra 3 which just came in yesterday! I'm loving this knife 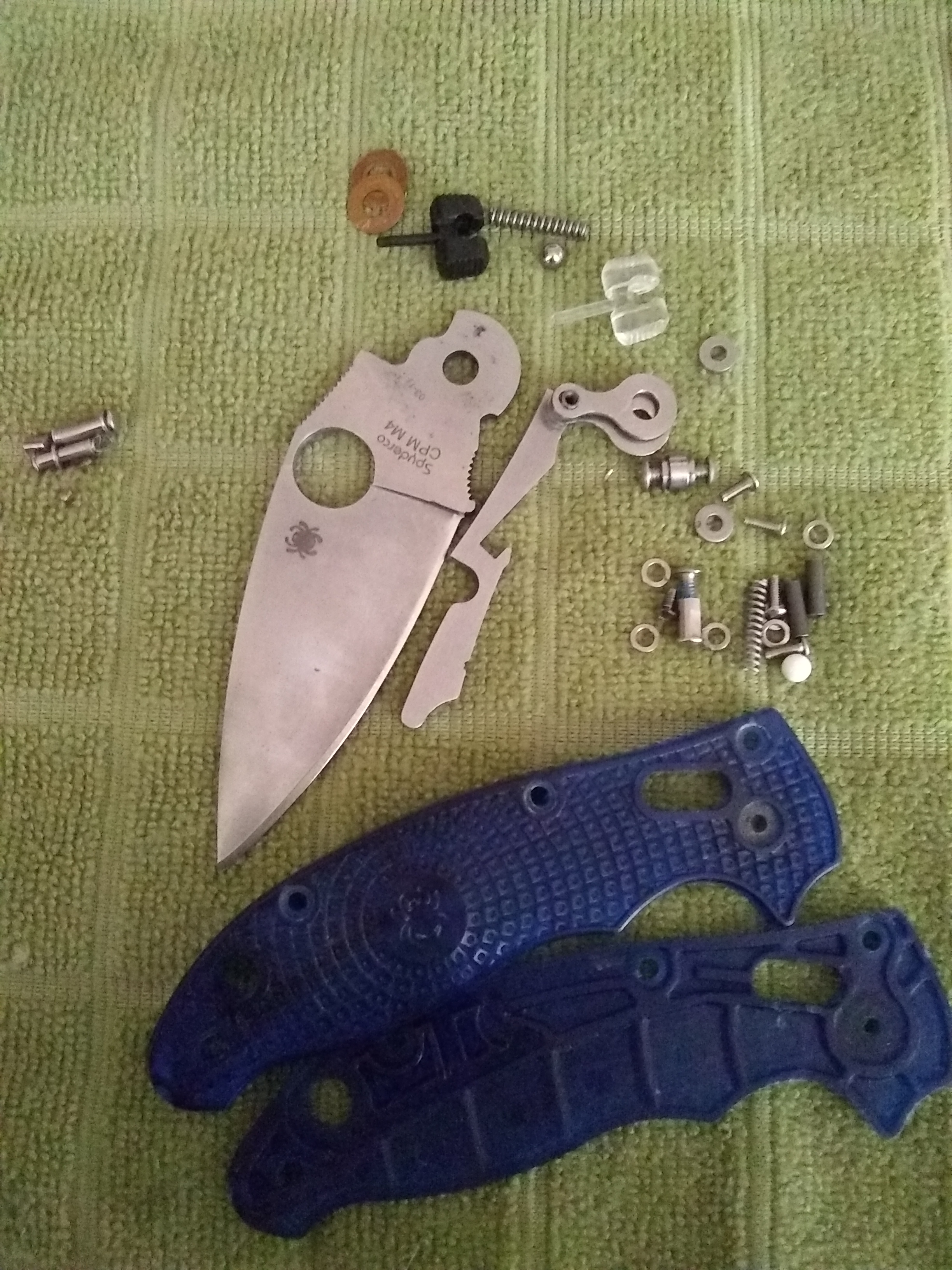 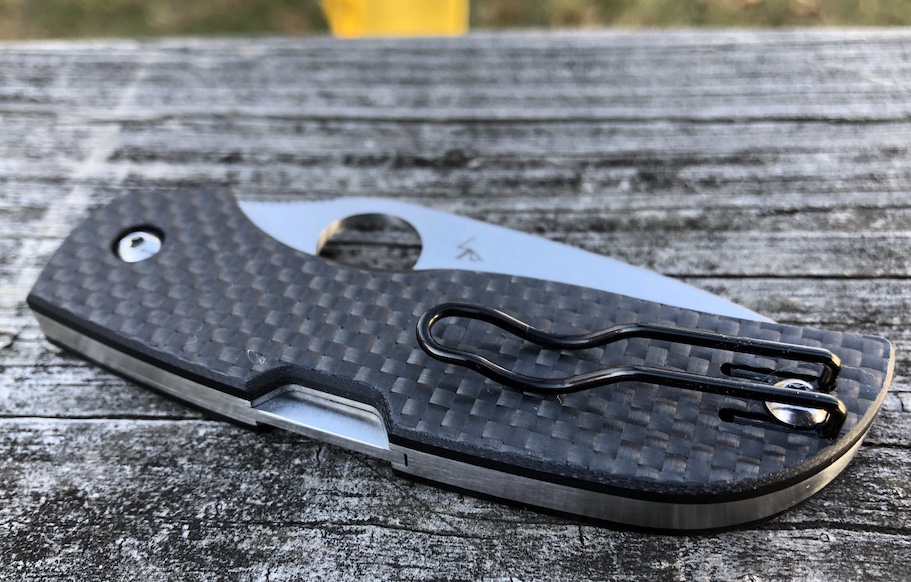 toxophilus said:
Work party at Golden High Country Archers today, pleasant surprises on the way to and at home...

Heard a voice behind me at SFO while dropping off my Domino for some work, stating I had on a nice T-Shirt (recently won a BladeForums T-shirt and it has the logo bigger than life on the back of the shirt thx BladeForums); turned around & it was Eric!

He was gracious enough to take a picture with my aging mug, needless to say I was carrying/using my Manix 2 in S90V this morning while working on the archery range.

At home my BFF (38 years & counting) took delivery of a new leather NATO strap for the Seiko SNK805 that I modded as well as the Helm Komodo that was recently released!!! 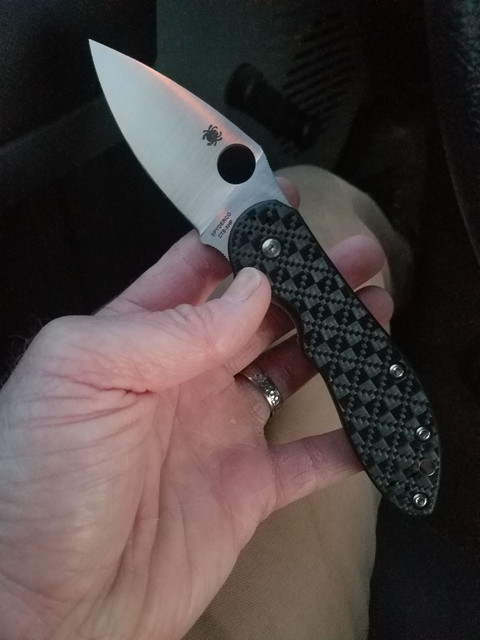 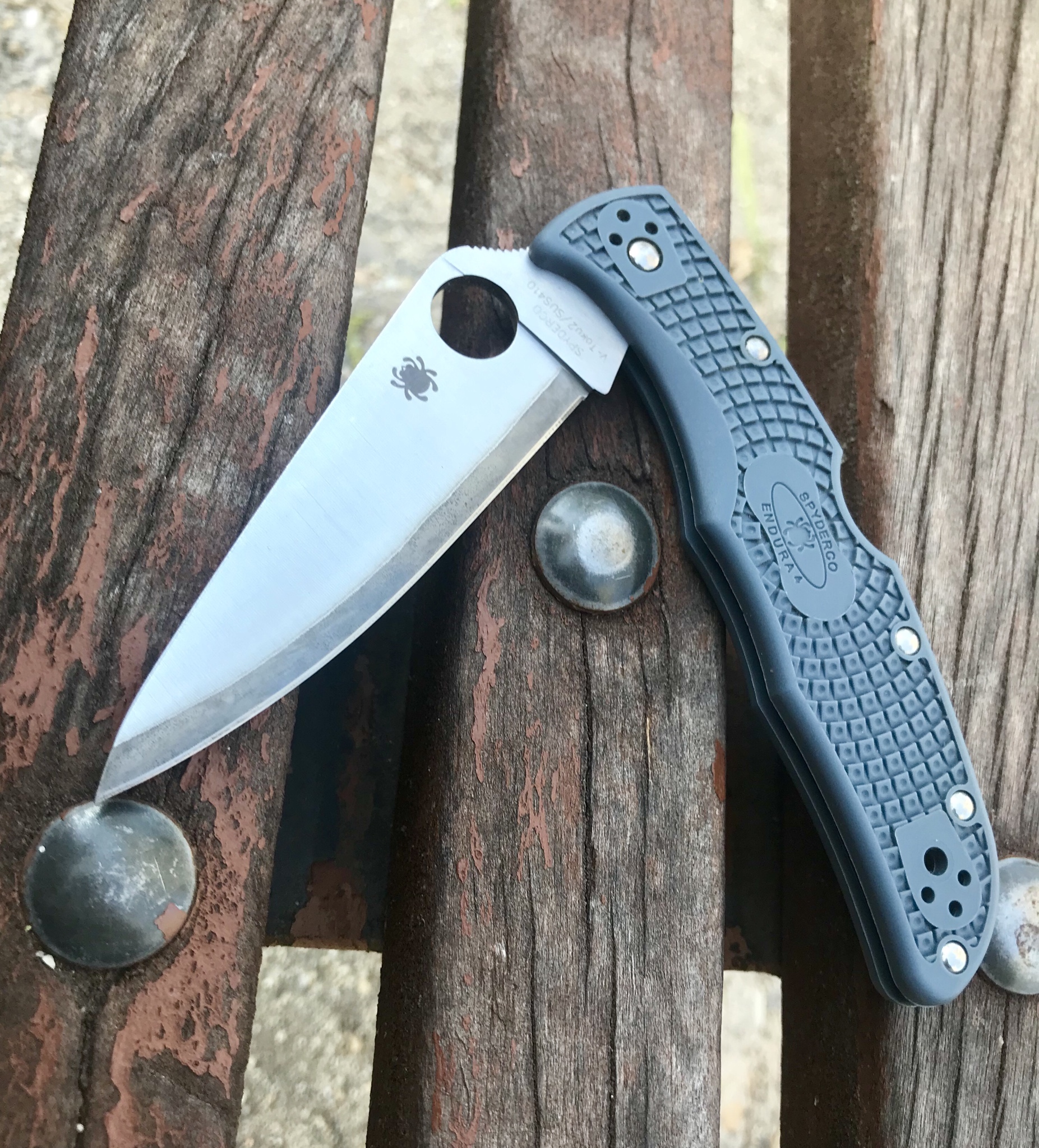 Manix2 , carrying the LW for work.

Was carrying a ZT0562 for a couple of days and decided to carry a Smock today. Apples and oranges.

The Smock is a thin, compact knife that falls in the class of gentleman EDCs to me. Wouldn't carry it while wearing a tux but it would be fine carrying to the office whether wearing a suit/tie or not. The hollow grind, sheepsfoot shaped blade is very sharp and suitable for any normal EDC task.

The button compression lock release is very convenient to use but I don't like the blade choil shape created to accommodate it; still think the sharp vertical front edge of the choil creates an unnecessary cutting risk; a rounded front edge as on the SK23 (pictured above the Smock in the photo below) would have been better.

On the other hand, I like the polished metal clip (which reduces signs of pocket wear), the full stainless steel liners (which provide strength) and the front flipper (which provides ease of deployment).

sgt1372 said:
Pocketed a Vallotton Sub-hilt today, which is simply a gorgeous knife.

The profile of the Vallotton is very similar to the Starmate that it replaced but comparing it to the Starmate and other Spydercos in terms of looks/build quality is like comparing my MB & BMW w/my Chevy Bolt & Toyota MR2. They are all functional vehicles but there are distinct differences in the quality of materials and construction that favor the MB & BMW over the Chevy & Toyota. They're just NOT the same.

On the other hand, the Vallotton is a little stout/heavy because it is distinctly overbuilt; again the way a MB often is. So, some may complain that the Vallotton is too thick/heavy for an EDC but those things don't bother me about the knife.

BTW, I already had a D/A Vallotton Auto that previously purchased from @Rusty_shakleford off of the Exchange but that knife is so rare/expensive (as well as illegal to carry outside my home) that I just had to buy this unmodified Vallotton for normal carry/use. 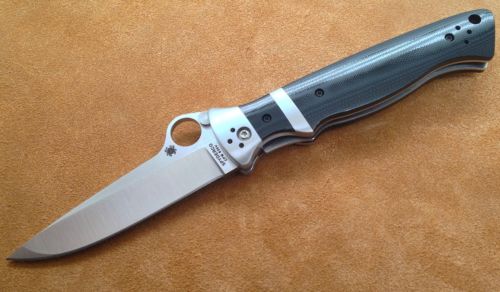 you have made me order either this or the lil Sub hilt. Can't decide