whereismyclock said:
how are those firesteel notches, in terms of effectiveness? A buddy of mine had one put into his knife. His looked more similarly to a dull, vertical guthook. It threw sparks well enough, but not better than a false edge on a smaller knife.
Click to expand...


The thing is, I could have ground the spine down a bit to square it off and create an edge for firesteel striking. But my BK2 came to me with a pretty round spine, so I opted for the notch. I feel like it works better, but I could be mistaken. Common sense tells that if there's more surface contact, there's more friction and therefore more sparks. I didn't want to grind the spine down, it would have taken a lot longer that just filing and sanding the notch and it would have looked weird. I'd have had to remove a lot of material, and I don't want to compromise the tankiness of the BK-2. On smaller knives squaring the spine off is a no-brainer. I have done it on my BK14, which is s great spark thrower, and on some of my Moras.

I'm thinking about stippling the scales or making my own... just a thought right now, I really like the stock scales, but I WANT TO MOD STUFF

Thanks to everyone for their responses. I'll try to contact bushman5 about his lifter notch.

Looks great. What did you use to make the jimping?
M

I'll try to get to the shop tonight or tomorrow to make the lifter notch and take some pictures of the tools I used. I don't know the english words for most of the tool I used.
M 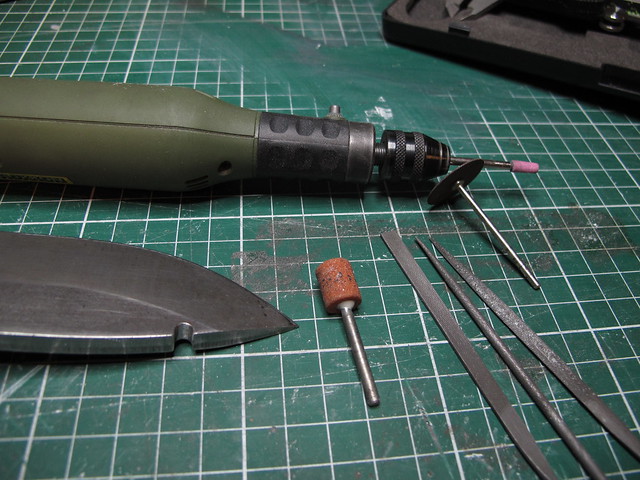 Here are the tools I used. A Proxxon/Dremel, a big and a small grind stone bit (the big one did most of the work for the firesteel notch, the small one did the lifter notch), a cutoff wheel which I used to start the notches for the jimping and to set the depth of the lifter notch, and a few little jeweler's files, flat, round and half-round/flat. The picture also shows the finished lifter notch. I scratched the blade and the spine up a bit, but I plan to sand the whole knife up to 1000 grit or so anyways. 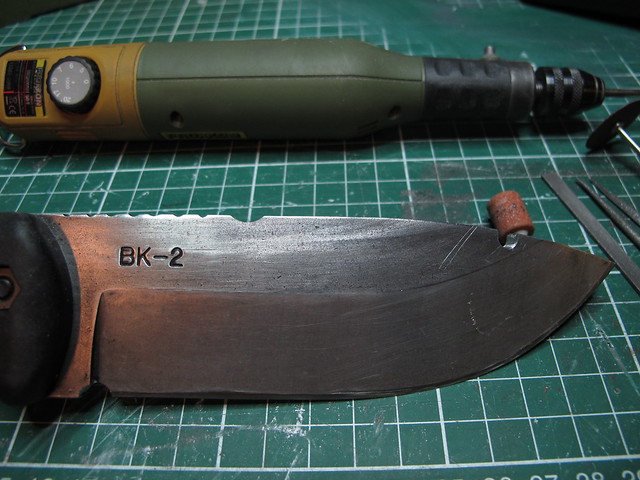 The knife as it looks now. I'll try to get some nice shots in the next few days. The scratches on the primary grind are what I mentioned earlier 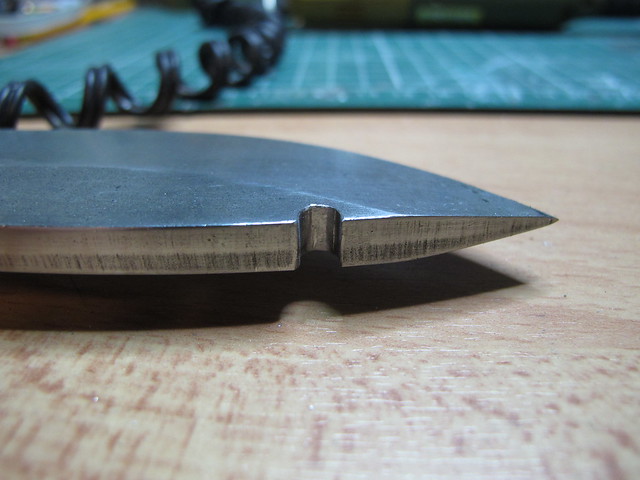 Close-up of the notch. It is just wide and deep enough for the intended purpose, which is lifting the big pot of my mess kit from the fire. The handle gets just too damn hot. I've been using my Victorinox SwissTool for that purpose, but since I forgot to put it into my checked luggage at Brussels airport, I realized that I don't really need it in the woods. Note that I paid attention to make it as round and remove as little material as possible, because I didn't want to compromise the strength of the blade, as I intend to baton it through a lot of wood. The round shape of the notch spreads the stress from batoning, so the tip is less likely to break off. The notch is now around .150" deep and .160" wide.

i like the notch idea for a pot lifter, but i'm also the type that just reaches over for a stick, and makes a tool for the job while waiting for the boil/simmer

i DO like the landshark teeth a lot, esp on "sticker" knives. aggressive. as anything.
M

I'm not really sure about the shark's teeth yet. I like the way the upswept part, probably the last 3/4" towards the tip, shaves wood. Just great. I'm thinking about the line cutter notch at the back of the blade, because the scouts use very hard and abrasive sisal cordage for everything. I might just make a notch that sharpens up easily for save cordage cutting, while preserving the main edge for easy chopping, batoning, and whatnot

Still not sure about those scales. Should I just try and stipple them?

Man that looks great! You did a really good clean job on it.
M

Widerstand said:
Man that looks great! You did a really good clean job on it.
Click to expand...


Thank you. The problem was that my hand cramped up while grinding the lifter notch and slammed the grindstone bit into the edge at 15.000/min. Just sharpened the dents out, good as new, shaves again.

Thank you both. I just discovered that my favorite knife online shop now sells SpecOps Combat Master (short) sheaths, so I'll have to rethink the sheath thing. Not sure if I like cordura sheaths though. The rattling of the knife in the sheath kinda bothers me, but I think there is a self-made kydex sheath somewhere along the way.
B

Can you put a LCD TV in the knife somewhere?

Seriously though, nice work. You guys are dangerous, making me think I can start doing this stuff.
Keep up the nice work.
M

Yo dawg, I heard you like knives, so I put a knife on your knife so you can knife while you knife...

If there's ever a "Pimp my Knife" show, this forum should be on it.

Thank you, old man Much appreciated.

Looks good so far, Meat. I might have to try my hand at jimping and a firesteel notch like that. I think I might even have those exact tools in my toolbox at work.. (actually, my Dremel is grey)

I will be attempting to do this to the blade before the weekend, and I have some nice curly birch coming to make some non-removable scales for it, I will also reshape the butt end of the knife, get rid of the skull crusher pommel and make it a bit less bulky and more elegant. I hope the full convex grind will make it more of a cutting tool.

I fell in love with Beckers again. They are like good friends that welcome you with open arms even if you don't take care of them for a few weeks.

I may or may not be weird for calling knives friends. 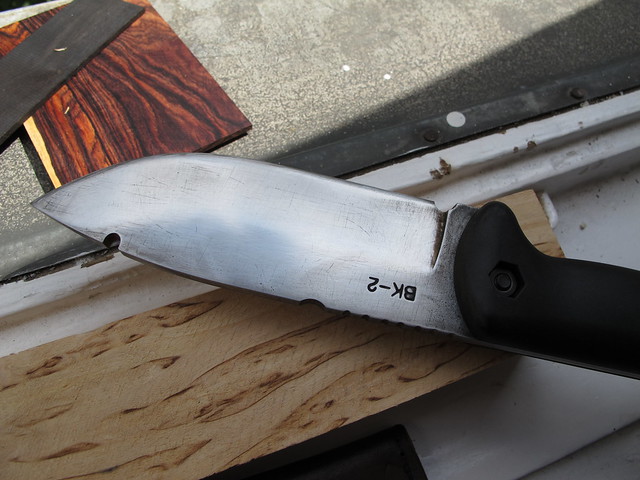 This is where we're at. Convexed the edge and primary grind, and took most of the shoulder between the flat part and the primary grind off. This knife slices like hell

You can also see the birch wood that I ordered to make some scales, I hope I'll get to the shop today to cut some slabs out of it. The wood online shop even sent some free samples of other woods... awesome stuff. I think I'll have to make my own Loveless Bolts too, don't want to drop another 7.50 plus shipping. We'll see.

I had a nightmare last night about epoxy not curing properly and my beautiful scales falling off. Horrible stuff, believe me.