Prester John said:
Tomorrow, Thursday, March 28, is a very special day in the United States: Opening Day of Baseball. It should be a national holiday. I GOTTA carry this:

Victorinox Tinker from a GAW by

You said it! Take me out to the ballgame! Great Vic, too, very seasonal.


Pàdruig said:
Went with this older Barlow today. It isn't the finest of knives but I really like it. It practically sings when you open and close the blades, some of the best walk and talk in my collection.
Click to expand...

Very fine Bower, yours has the deepest bolster stamp I've seen on one. I have that knife's twin but the bolster stamp is about ⅓rd gone.


llKRAKENll said:
Love the jigging on this 38 Diamond Jack
https://imgur.com/gallery/UbvBwVH?s=sms
Click to expand... 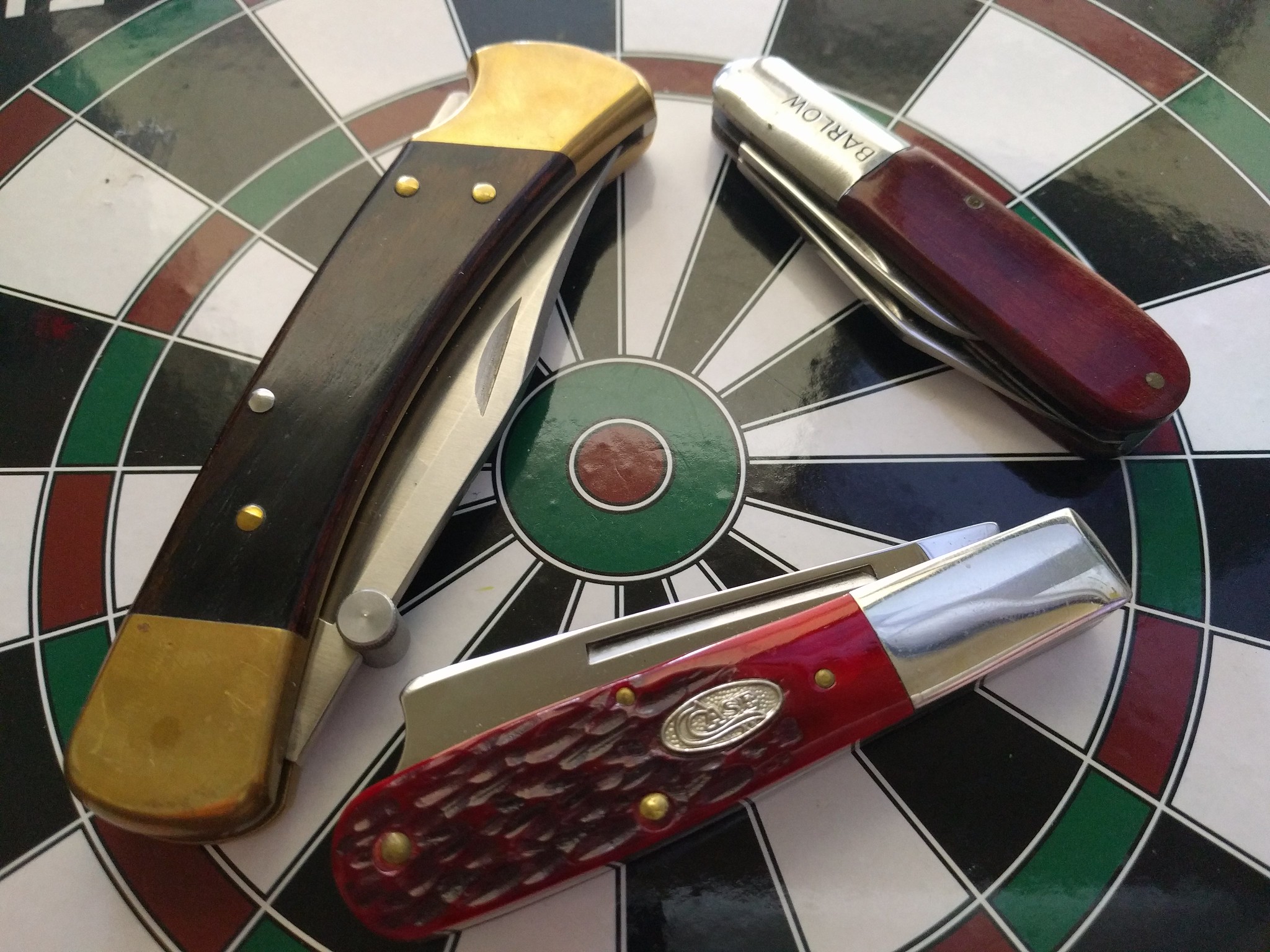 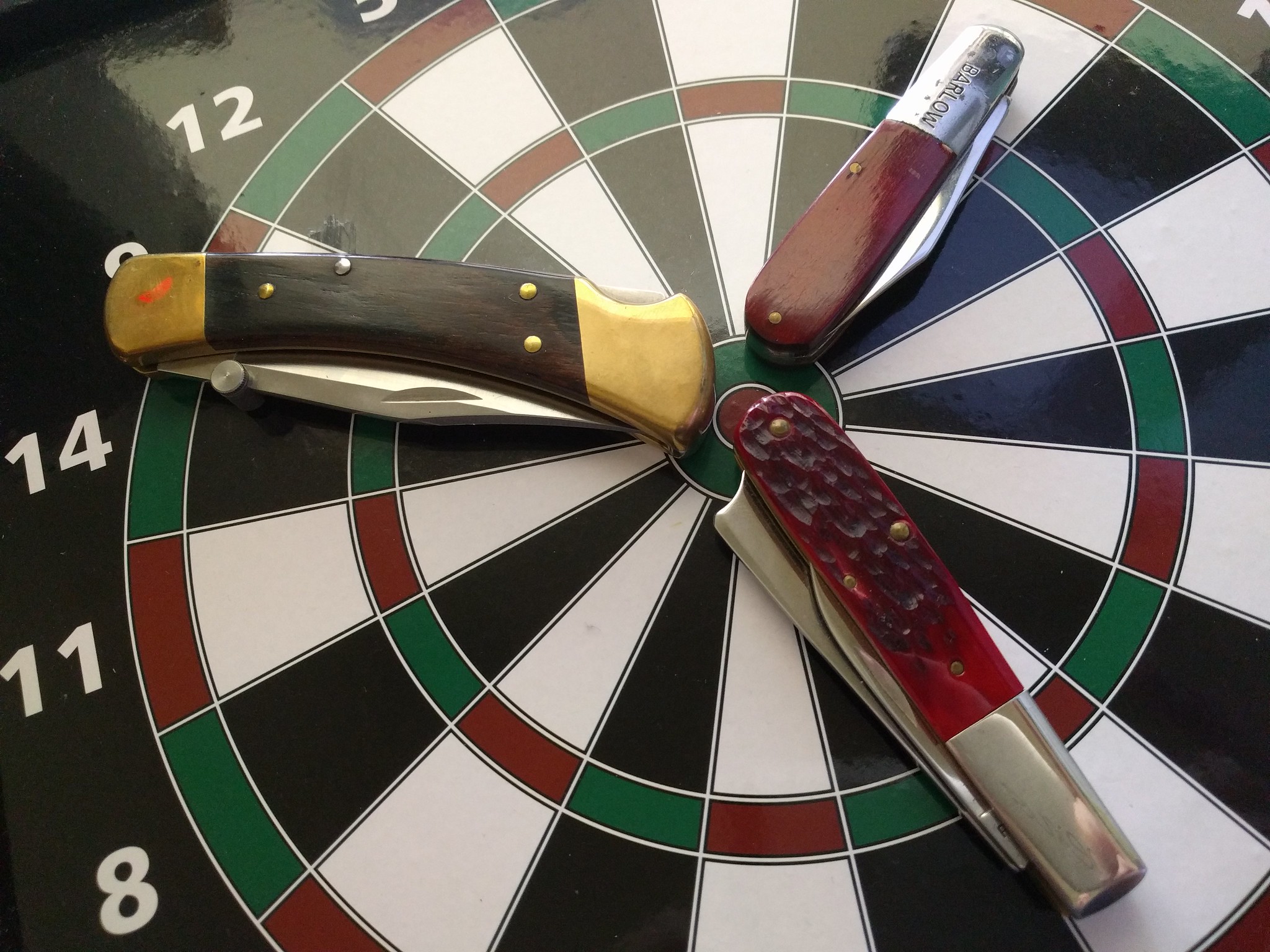 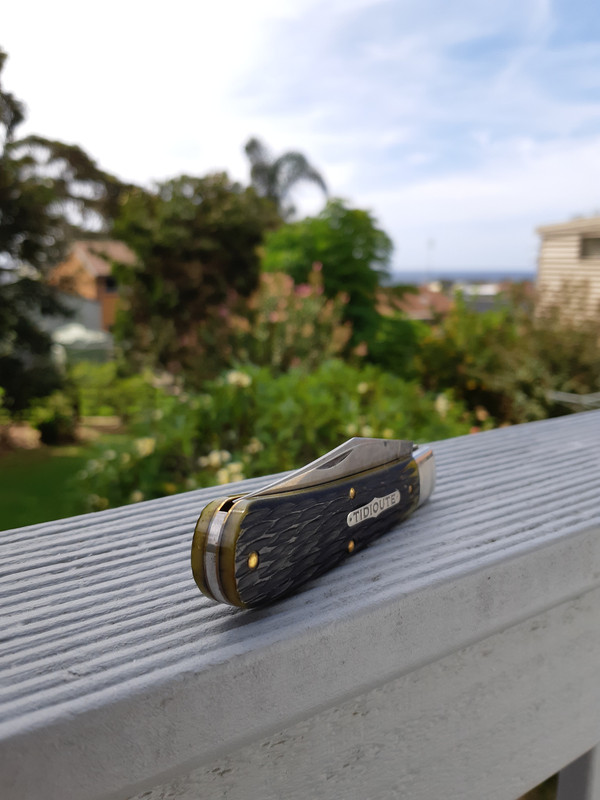 If anyone remembers Ol'Pondy...so named because of its slimy green algae like dye job...here it is overlooking "the pond"....from my new home..
Click to expand...

Prester John said:
Tomorrow, Thursday, March 28, is a very special day in the United States: Opening Day of Baseball. It should be a national holiday. I GOTTA carry this:

Victorinox Tinker from a GAW by

Still moving in...sorting out all my stuff...
Place looks like an explosion in a charity shop....but I feel right at home. Hoping my boys will visit soon.
Cheers. 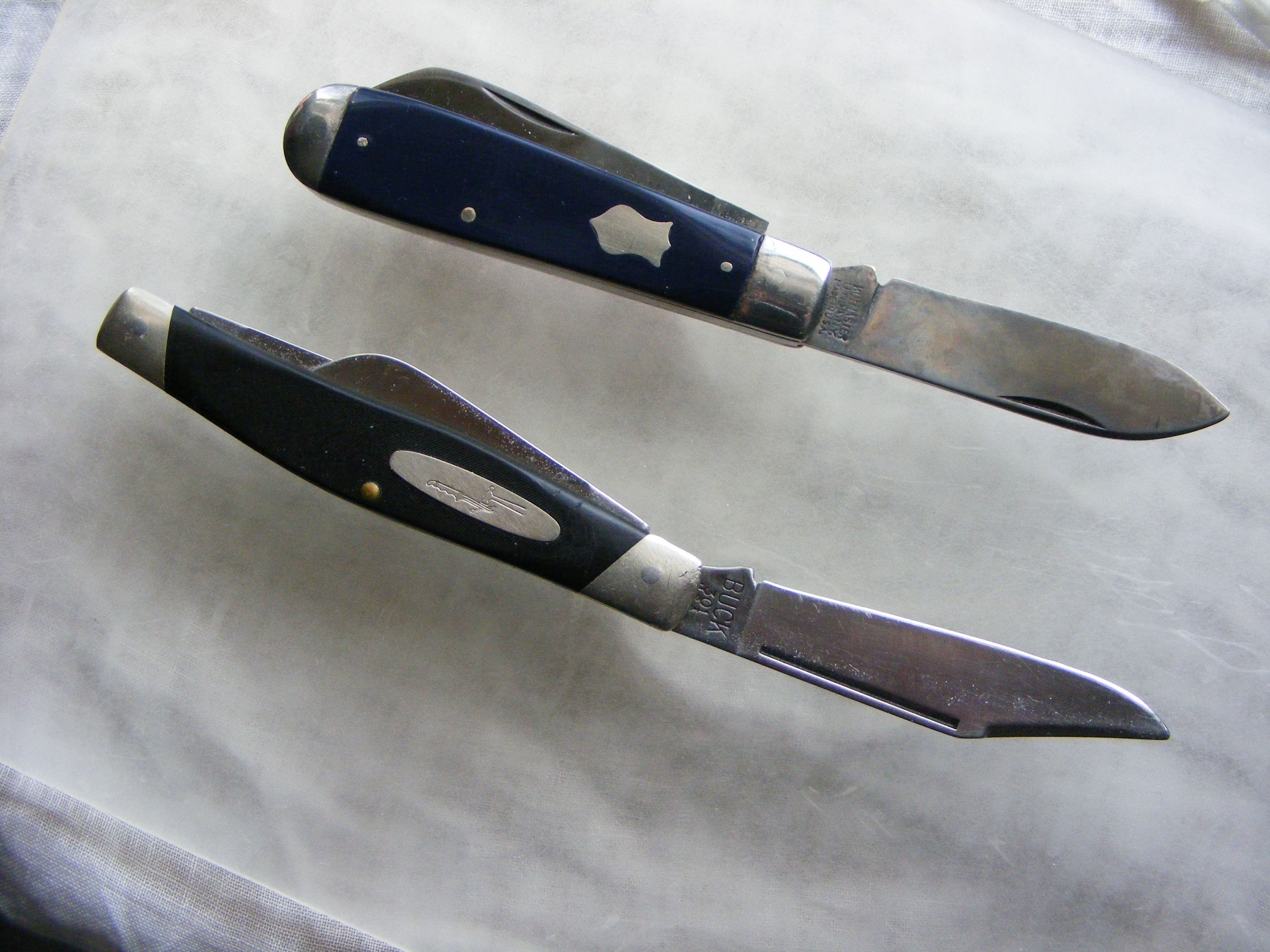 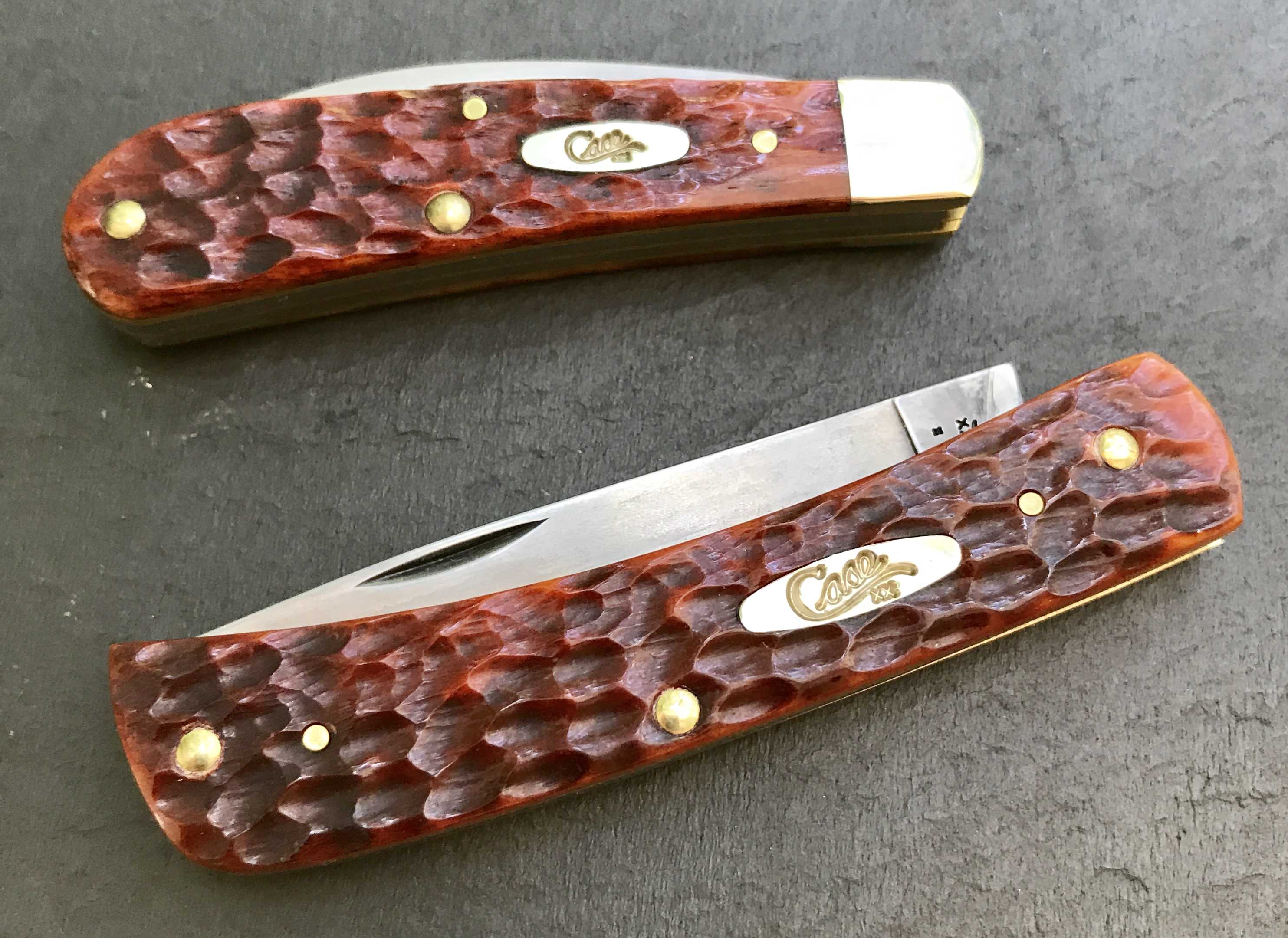 How’s the walk, talk and pull on those case Jr Soddies?

Incredible jigging on those.


Pàdruig said:
I'm usually not too crazy about such knives, but that is a beauty, Dwight
Click to expand...


meako said:
If anyone remembers Ol'Pondy...so named because of its slimy green algae like dye job...here it is overlooking "the pond"....from my new home..
Click to expand...

Great to hear Jon. Looks like a sweet spot! 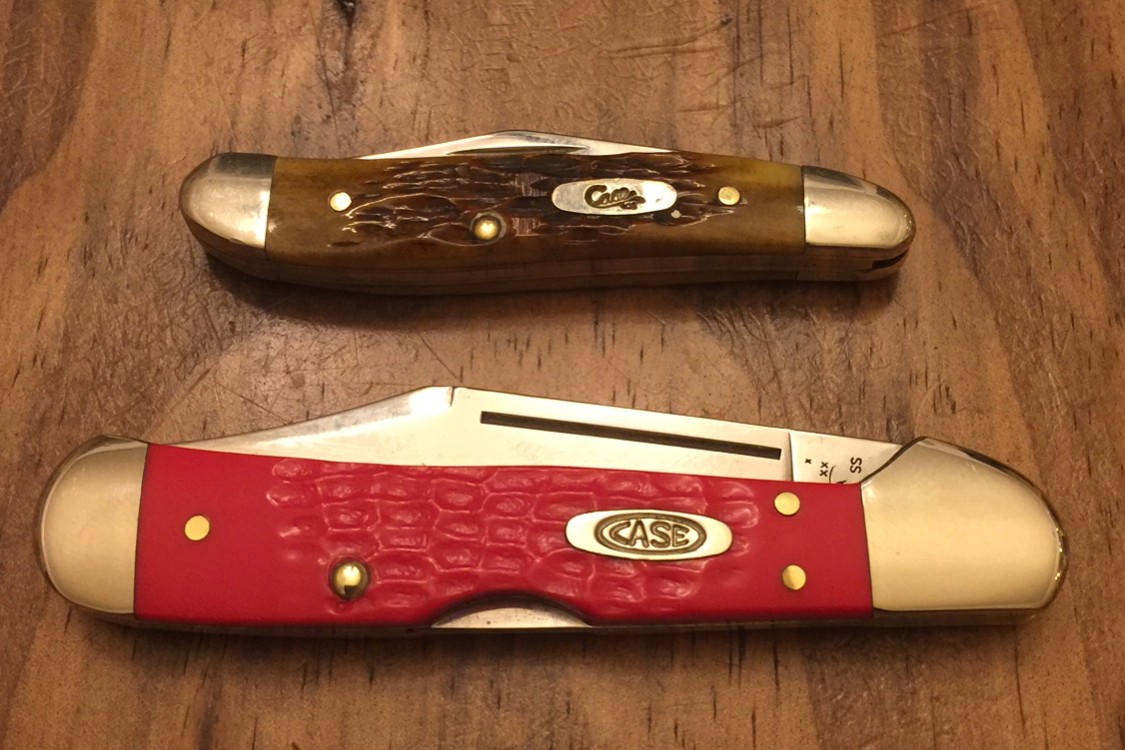 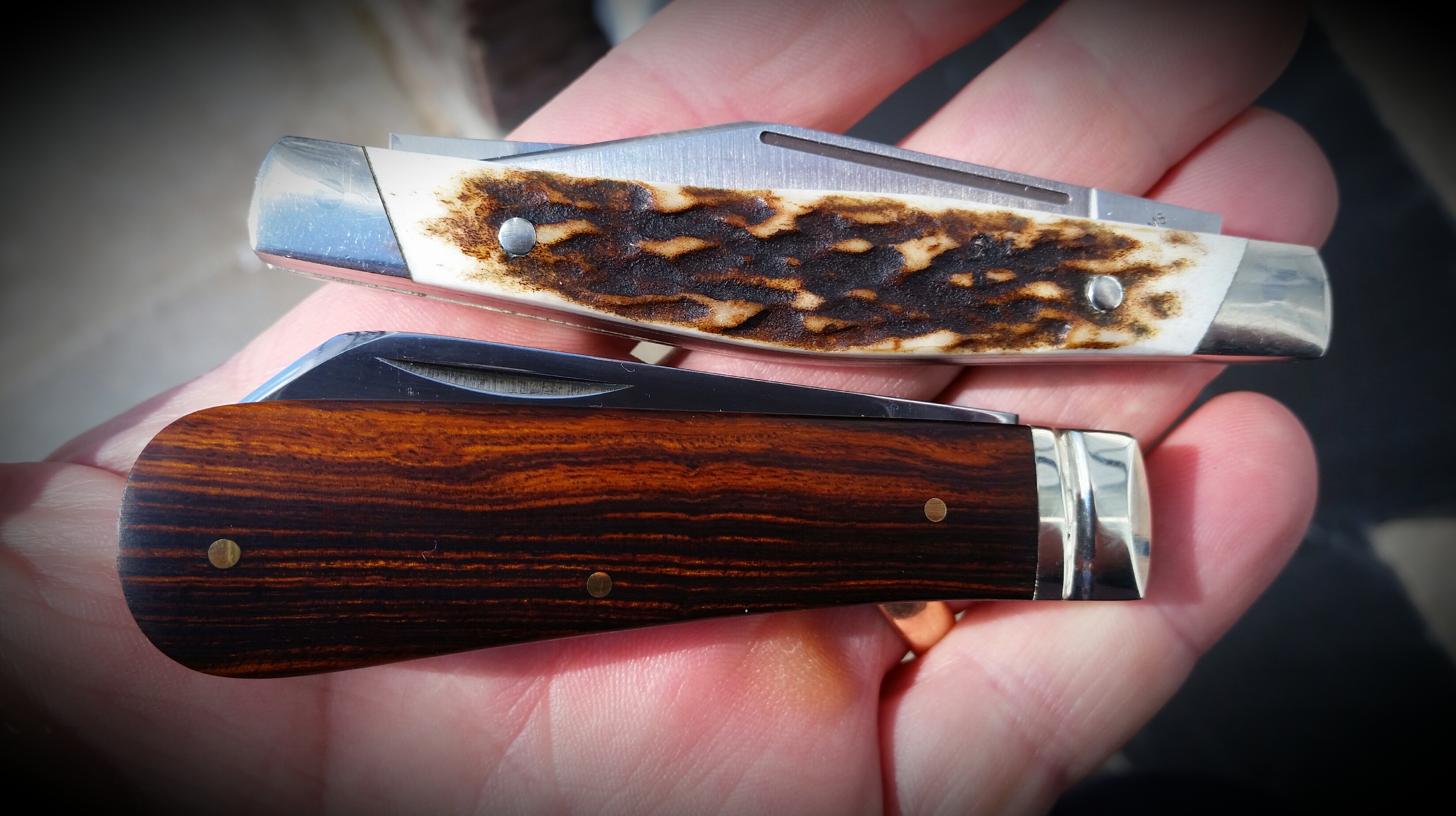 I'm showing off one of my earlier acquisitions today, in addition to the ever-present Camillus and Case mini-trapper. I purchased this stag Buck 110 in early 2001, back when the Buck custom shop was called Pete's Custom Knife Shoppe. I ordered the blade partially serrated, because I was doing a lot of rope work back then, but still wanted some plain edge for general outdoor use. All in all, it's probably the only combo edge I've ever not regretted purchasing. Buck ground some great serrations, and it has always excelled at its job.

The Sambar stag that Buck chose is absurdly thick and beautiful. I guess it was just easier to get huge chunks of gorgeous stag back then, before the 2003 export ban began. Buck seriously earned bonus points on this knife, perfectly shaping the stag with finger grooves. Between the finger grooves and stag thickness, the handle provides a grip security and comfort I've rarely felt on a folding knife.

The steel is BG-42, which doesn't seem to be very popular anymore, but I still love it. BG-42 takes a very nice edge, and holds it quite well. Buck/BOS got the heat treatment just right, and the edge is ground nice and thin, this knife being made just after Buck introduced its newer thinner Edge 2000 grind.

It's hard to capture in pictures, but Joe Houser from Buck had the blade engraved for me at one point, with its name The Angry Beaver. It got this name one weekend in the Adirondacks, while I was whittling away out in front of our cabin. My father-in-law made a remark about it cutting like an angry beaver, and the name just stuck. After that day, any time I pulled out my trust 110, someone would yell, "Beware the angry beaver!!!"

I've wanted to retire this knife many times, but it often comes back from the archives and into use. It's just too great a knife to be stored away, I guess. The brass has a few dings and scratches, and I haven't polished it recently, but even so, The Angry Beaver is still a beauty to behold. 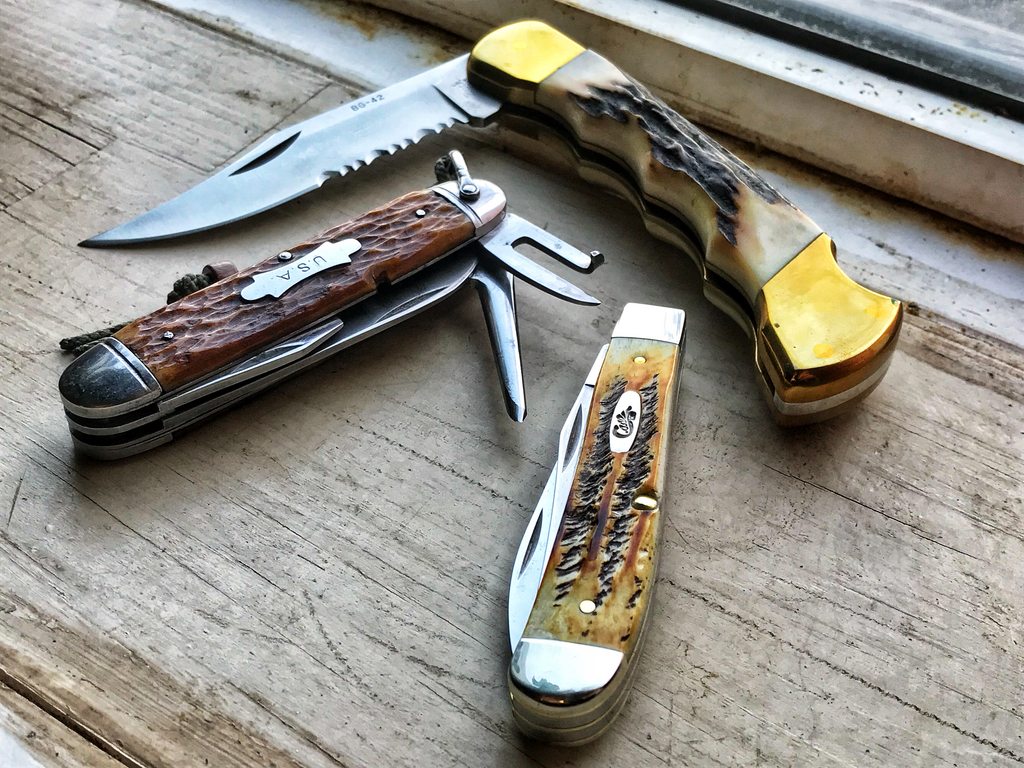 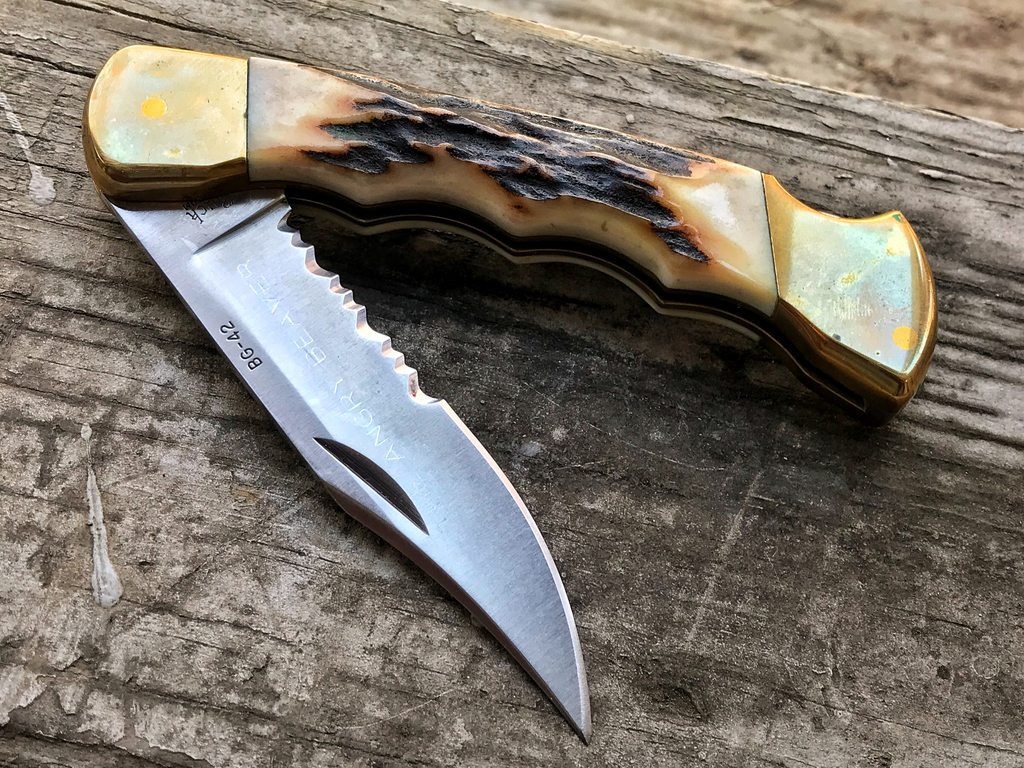 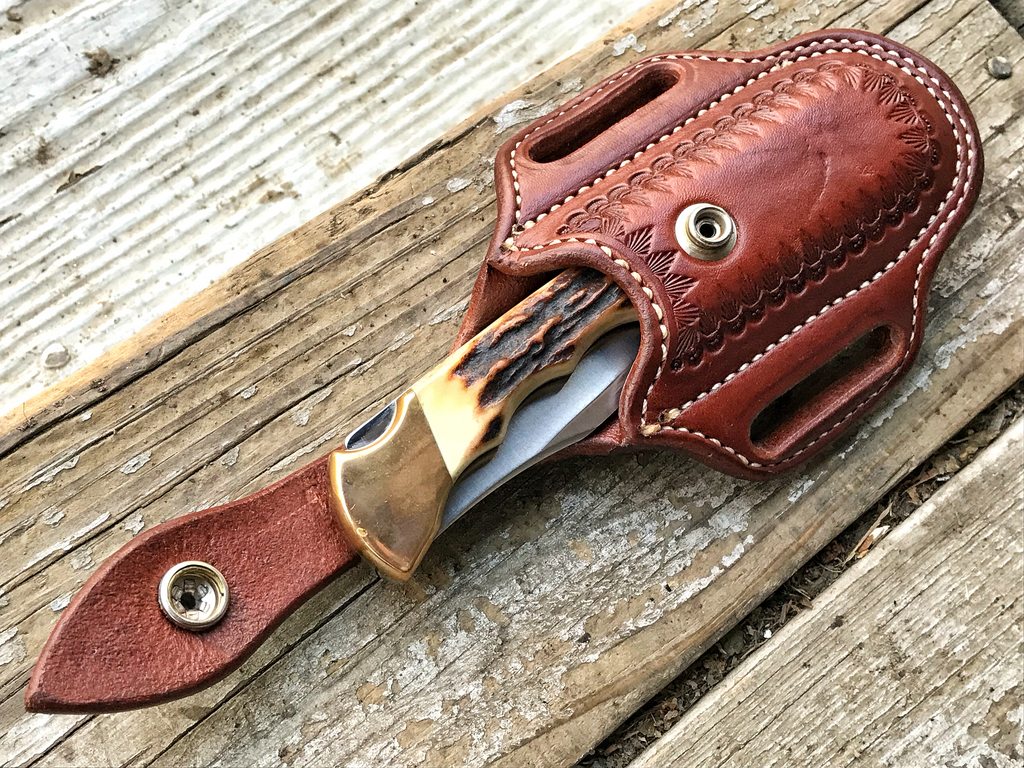 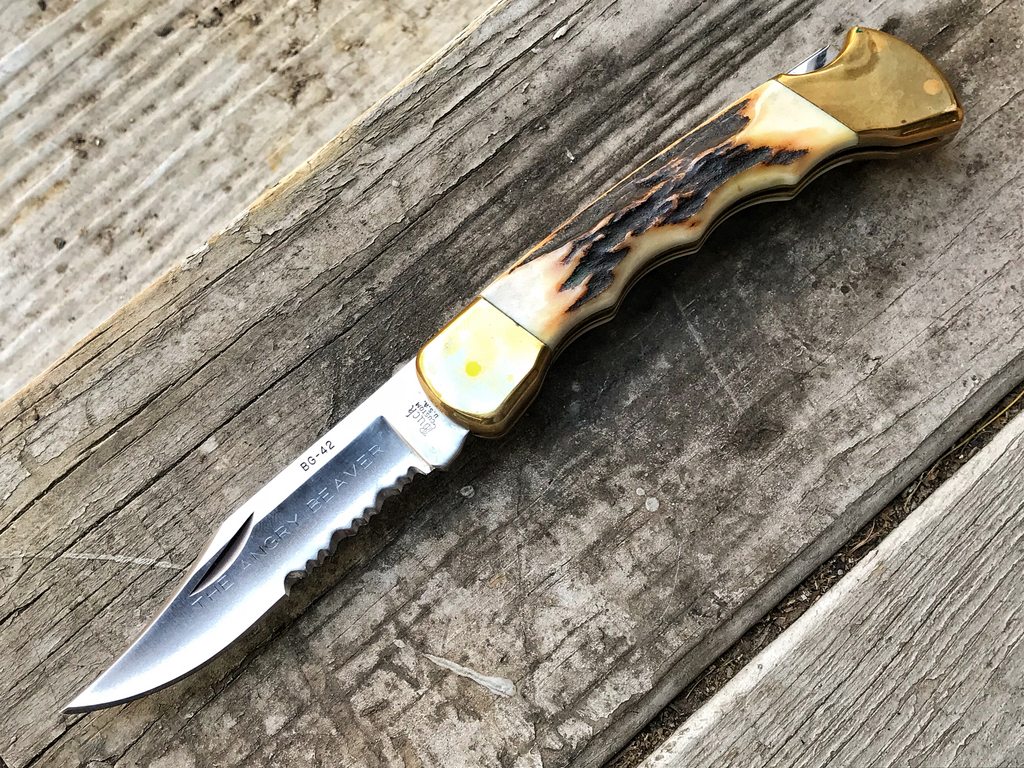 Masterful photography and a wonderful knife to boot. My very first knife was a Diamond Edge.

Ulster/Craftsman Stockman and one of my Vics today. 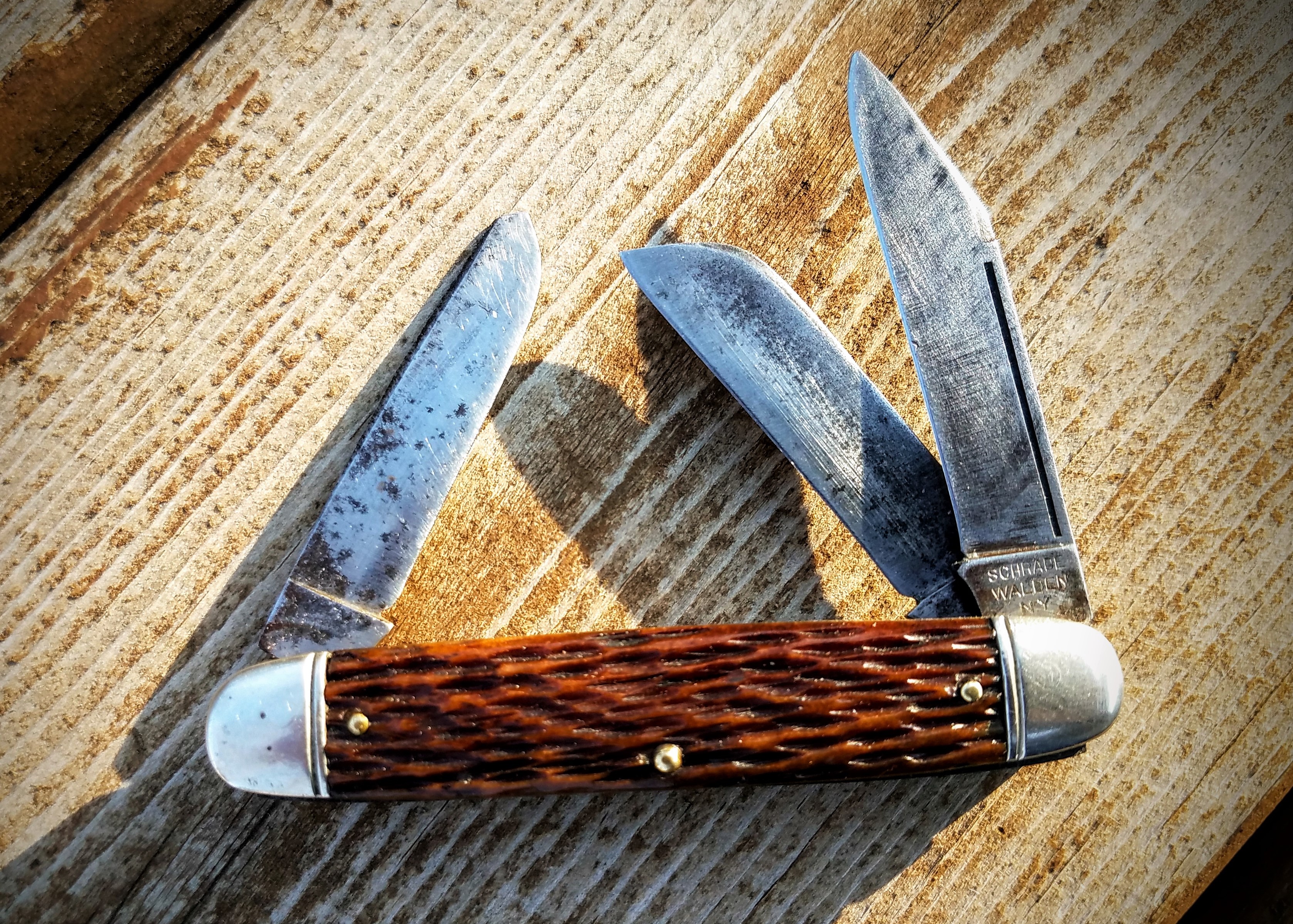